As someone who has lived on the island for my entire life, I’m always giving people recommendations of places to visit on Oahu. After all, there’s so much more to the island than just the tourist hub of Waikiki!

While on Oahu, you can learn about Hawaiian history at ‘Iolani Palace, watch pro surfers tackle massive waves at Banzai Pipeline, and even see a recreation of a famous Japanese temple!

So whether you’re looking for adorable towns, hidden gems, historic landmarks, or beautiful beaches, here are 12 amazing places to visit on Oahu, Hawaii.

Many visitors to Oahu forget to take some time to learn about Hawaiian history. A trip to ‘Iolani Palace, the only official palace in the United States, can easily remedy that problem.

‘Iolani Palace was once home to King Kalakaua and Queen Lili‘uokalani, the last of Hawaii’s reigning monarchs. And when a group of American businessmen decided to overthrow the Kingdom of Hawaii, Queen Lili‘uokalani was then held prisoner in this palace for eight months.

While at ‘Iolani Palace, you can learn more about Hawaiian history, discover how Hawaiian royalty lived, and even see the room in which Queen Lili‘uokalani was imprisoned. If you decide to visit at the end of July, you might even get to watch the amazing Prince Lot Hula Festival.

Waimea Bay is one of the most famous beaches on Oahu. In the summer, the conditions are perfect for swimming and snorkeling. In the winter, they are great for surfing. But Waimea Bay is most famous for cliff diving. On the western end of the beach, there is a fifteen-foot-tall rock where locals and visitors alike brave their fears of heights for little thrills.

While many visitors to Oahu spend the entirety of their vacations on the beach, very few remember that Oahu also has stunning mountain ranges. And that’s a shame, because these mountains are one of my favorite parts of the island! One of the best places to visit on Oahu to see these greenery-laden mountain ranges is Ka‘a‘awa Valley.

The easiest way to access Ka‘a‘awa Valley is by visiting Kualoa Ranch. There are many different tours you can take at Kualoa Ranch, but my favorite is the ATV tour. While on any

of the provided tours, you’ll be able to admire the views of the thriving Ka‘a‘awa Valley and Ko‘olau Mountain Range, learn about Hawaiian mythology, and even eat fresh tropical fruits right off the tree!

Kualoa Ranch also happens to be a popular filming location. Jurassic Park, 50 First Dates, Jumanji, and many more movies and TV shows have been filmed there. Even Netflix’s latest hit, Finding ‘Ohana, was filmed at Kualoa Ranch.

Kailua is a small town on the east side of Oahu that is most well-known for its beautiful beaches. It is, after all, home to both Kailua Beach and Lanikai Beach, both of which have been recognized as a couple of the best beaches in the world.

But Kailua also has a different feel from the rest of the island. It combines the island’s relaxed, yet adventurous atmosphere with a free-spirited vibe. You can kayak to the Mokulua Islands, try vegan lau lau (a traditional Hawaiian dish wrapped in ti leaves) from Ai Love Nalo, and even hike to the Lanikai Pillbox for sunrise.

While the Lanikai Pillbox Hike is technically located in Kailua, it deserves a feature of its own.

The first question many people have is, “what is a pillbox?” A pillbox is essentially a cement military bunker that was built during World War II and used as a lookout point. There are quite a few pillboxes dotted around the island, but the Lanikai Pillbox is the most famous one.

This 25-minute hike to the first pillbox gives you amazing views of the two bright green Mokulua Islands in the distance. When combined with the sparkling blue Pacific Ocean and the golden rays of a sunrise, the scene is absolutely magical!

The Byodo-In Temple is definitely one of the best places to visit on Oahu – but not many people know about it! This bright red Japanese temple is actually a miniature version of the Byodo-In Temple in Uji, Japan, which also happens to be a UNESCO World Heritage Site.

On December 7, 1941, the U.S. navy base at Pearl Harbor was bombed by the Japanese Navy Air Service, killing over 1,000 people. This event incited the United States’ involvement in World War II.

Today, you can visit the Pearl Harbor National Memorial to learn about the events leading up to and following the attack, pay your respects, and even meet a veteran of the Pearl Harbor bombing.

Located right at the entrance of the garden, the plumeria grove includes dozens of plumeria varieties in all sizes, shapes, and colors! With blooming flowers ranging from pristine white to striking pink, it’s a gorgeous sight to see.

Kaka‘ako is the trendiest neighborhood on Oahu. Situated in Honolulu, Kaka‘ako boasts fun fusion restaurants, amazing street art, and exciting events. You could easily spend your entire day admiring the murals from the Pow Wow! Hawaii festival, dining at one of the restaurants at SALT at Our Kaka‘ako, perusing the adorable shops of the South Shore Market, and enjoying the atmosphere of the Honolulu Night Market.

Banzai Pipeline – or just Pipeline – is known as one of the premiere surfing spots in the world – and it’s located on Oahu’s North Shore! Simply put, it’s one of the coolest places to visit on Oahu.

In the winter, waves regularly reach 20 to 30 feet (or 40 to 60 feet for anyone who isn’t from Hawaii, because we measure wave size differently). You can often see pro surfers like Kelly Slater and Billy Kemper surfing these massive waves! And if you’re lucky, there might even be a surf competition during your time on the island, such as Billabong Pipe Masters or Da Hui Backdoor Shootout.

Laniakea Beach, also known as Turtle Beach, is definitely one of the best places to visit on Oahu. Oahu has tons of wildlife enjoying the island, but none are as easy to see as the turtles on Laniakea Beach. As a matter of fact, in the summers, it’s not uncommon to see half a dozen Hawaiian green sea turtles lounging on the sandy shores.

If you do visit Laniakea Beach, please remember to give the turtles space and respect. Hawaiian green sea turtles are actually an endangered species, so it’s especially important that you do not feed or touch these animals.

While at the Dole Plantation, you can learn about the company’s history, ride on the kid-friendly train, enjoy loads of pineapple treats, and even wander through the world’s largest maze!

What are some other spots that you think belong on this list of the best places to visit on Oahu, Hawaii? Let me know in the comments below!

For more on Hawaii Travel: 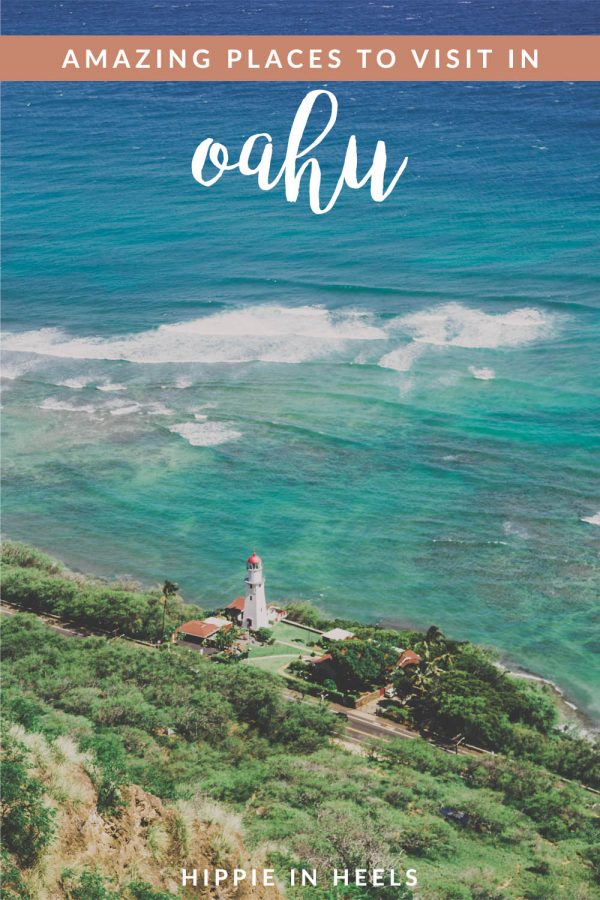 Sarah Etinas is a travel writer based on the beautiful island of Oahu, Hawaii. When she’s not enjoying the stunning beaches and hikes of her home island, she’s going on exciting adventures all around the world. You can keep up with her travel experiences on her website, Borders & Bucket Lists.