Spring in South Korea may be the most popular season, but the winter is another world altogether. As the temperatures dip in the winter and the cherries are no longer blooming, the country becomes isolated from tourists. Thanks to its proximity to Siberia, the winter in South Korea is cold, bitter, and even harsh at times. But, even in these trying conditions, the charm and allure of South Korea will dazzle you. 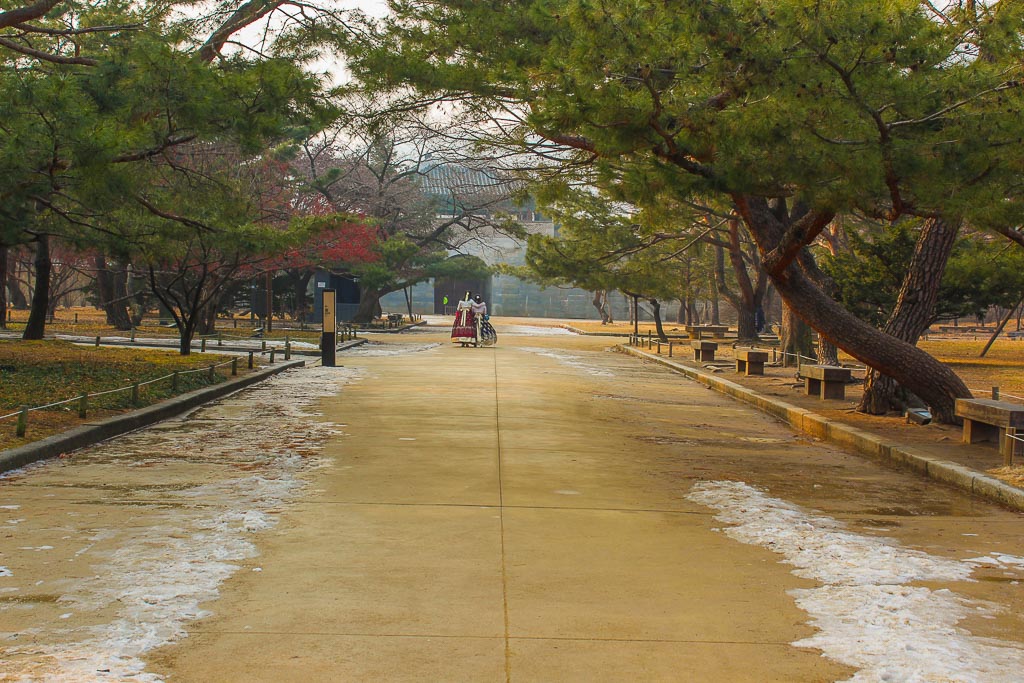 The serene grounds of the Gyeongbokgung Palace, without its usual crowds, in winter

Best done between December and March, this 10-day itinerary is ideal for those looking to get a taste of South Korea’s winter without feeling too rushed.

Seoul is the heartbeat of South Korea. On one hand, it is a high-tech metropolis with huge skyscrapers, world-class transport, and urban architecture. On the other, it is a historical city with sprawling palaces, Buddhist temples, and traditional markets.

As the mercury dips, imagine yourself enjoying steaming hot street food, taking part in a tea ceremony, hiking up snowy mountains, or sailing to islands that are covered in thick snow. In the evenings, the entire city is lit up with a million lights, bringing in the holiday cheer. Frankly, you can spend your entire trip in Seoul and you’d still not run out of things to do. But, here are a few offbeat experiences we recommend to make the best of Seoul in 4 days.

1. Grub on winter eats at Gwangjang market – Of all the markets Seoul is blessed with, nothing beats Gwangjang when it comes to traditional Korean food. Under a thinly insulated roof, a range of shops run by caring ajummas put up a feast. Try the hotteok (sweet Korean pancake), bindaetteok (mung bean pancakes), and mayak gimbap (rice rolls). Don’t forget to be covered in enough layers since the market is relatively open.

2. Embrace Buddhism – The Jogyesa temple is more than a century old and has become the centerpiece of Korean Buddhism over the years. In the winter months, visit in the evening to see the fully illuminated temple, a sight to behold. 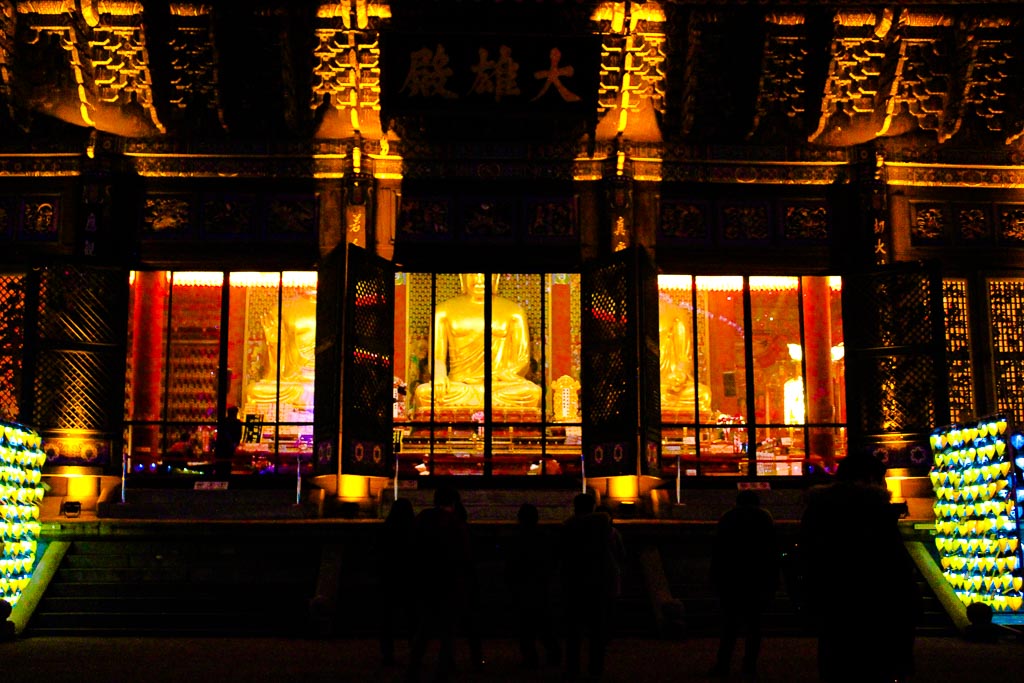 3. Partake in a tea ceremony – The ancient Korean tea tradition is kept alive in a handful of teahouses in the city. Our pick is the Dawon tea house nestled inside the Kyungin fine art museum.

4. Watch street performers in Hongdae – While Myeongdong is the paradise for shoppers, Hongdae is where you’ll find the youth. In the winter, with a hot coffee or some soup to give you company, watch groups belt out fantastic performances to K-pop songs on the streets.

5. Spend a day at Nami Island – Made famous by the TV show, “Winter Sonata,” Nami Island is the perfect romantic getaway. Snow blankets the entire island from the barks of trees to the lake, making for a beautiful setting to spend your day in. 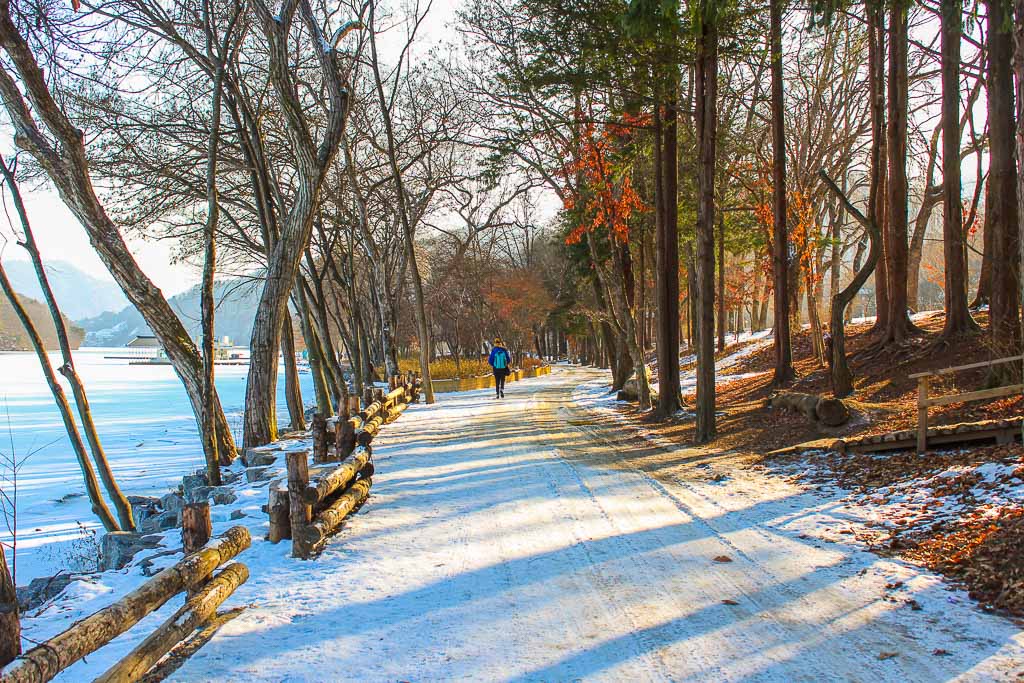 One of the best-kept secrets of South Korea, Pyeongchang is the complete winter dream. Originally a small fishing community and one of the country’s poorest regions, Pyeongchang boasts of some of the world’s top ski resorts today. The region received a huge facelift in 2018, as hosts of the 2018 Winter Olympics. A new high-speed railway line was also launched as part of the games, cutting the journey from Seoul down to just 2 hours. 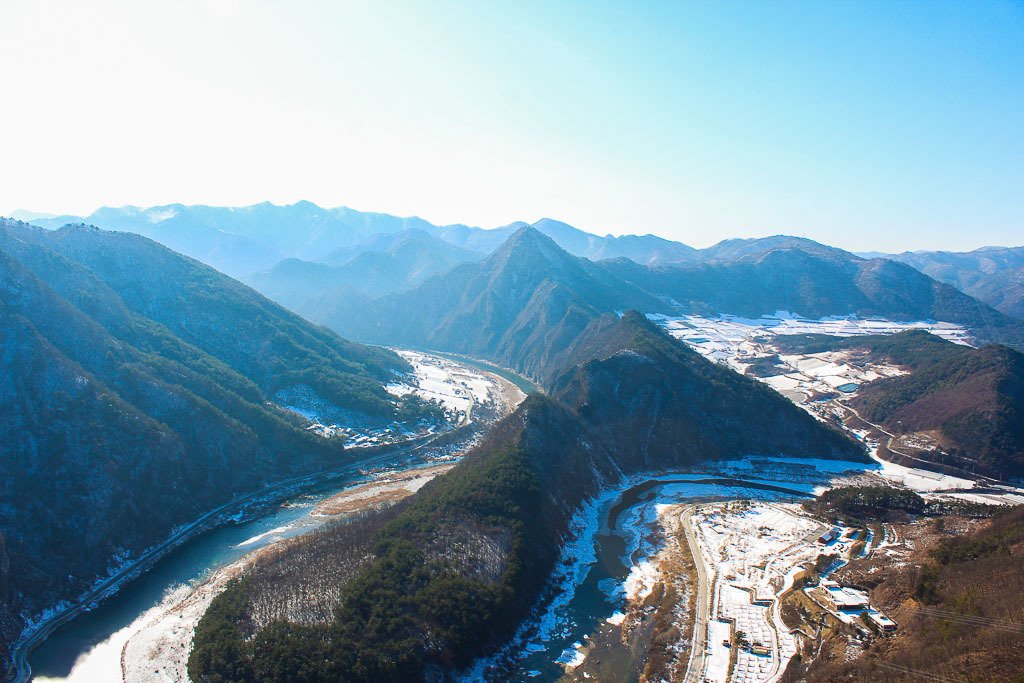 When the snow begins to fall, Pyeongchang turns into a winter wonderland

In spite of the boost the Olympics gave, Pyeongchang has still not seen a huge influx of tourists, making it a relatively calm place to enjoy a quiet Korean winter. Our recommendations for things to do:

1. Ski, Ski, Ski – Whether you’re an amateur or an expert, the Yongpyong Ski Resort has just the right options. Even at 2 AM in the night, the resort has ski courses running. So, arm yourself with a bottle of Korean Soju and enjoy skiing in the dark with the Milky way for the company. This can also be done as a day-trip if you wish to stay elsewhere.

2. Live in a cabin – Retire into this cabin in Jeong Seon, far from the madding crowd. Hosted by a local family, the cabin has the classic Korean ondol heating system and all facilities to cook your meals. Make a trip out to the nearby town centre to experience a fascinating skywalk as well as a railbike ride. 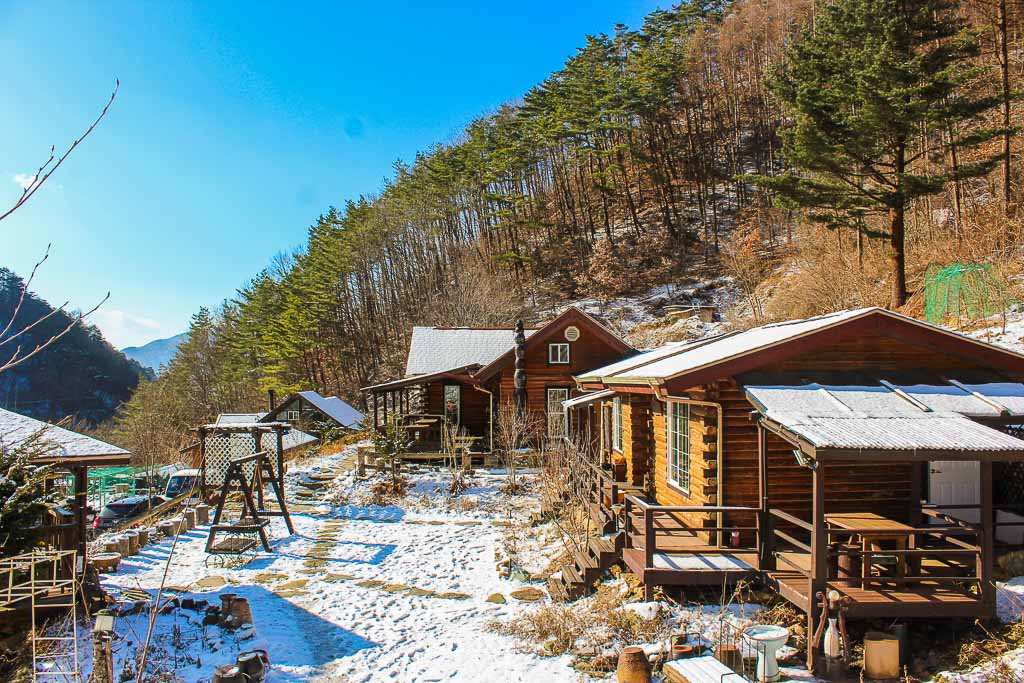 A cabin in the Korean alps, away from the hustle and bustle

3. Temple stay at Woljeongsa – Spend 2 days at the temple as part of the traditional temple stay program, a short insight into the teachings of Korean Buddhism. Get a complete digital detox while learning nuances of the Korean culture.

4. Go Ice Fishing – Every winter, the town of Jinbu-myeon in Pyeongchang hosts the annual Trout festival wherein locals partake in ice fishing to catch trout and devour it as a community. A lot of folk programs also take place alongside the festival to add flavour to the occasion.

After soaking in the deep winter in the Korean Alps, make your way to the country’s South Western town of Jeonju. The erstwhile capital of the Joseon dynasty that ruled over Korea over a 400-year old period, Jeonju is where traditional Korea remains well preserved. In 2012, Jeonju was also declared the UNESCO City of Gastronomy, a nod to its high-quality food scene. While a lot of people visit Jeonju on a day trip, we recommend spending 2-3 days here as there’s plenty to experience, especially in winter.

1. Drink as the Koreans do – Jeonju is one of the few places in the country that hosts makgeolli towns (bar strips serving Korean rice wine) to this day. Similar to the concept of Spanish tapas, walk into an establishment like Yetchon makgeolli and just order a kettle of wine to be treated to 15+ delicious sides.

2. Warm up in a Korean spa – The Red Ginseng Spa, located in Jinan outside of Jeonju, is one of the finest Korean spas. This wacky and unique spa is based on the principle of Yin and Yang and is nothing like an ordinary spa. (Think communal message, mind-blowing views, and ancient techniques).

3. Eat one of the world’s BEST meals – Bibimbap is a Korean dish that is much loved around the world. But, in Jeonju, the birthplace of the dish, you’ll encounter the authentic version of bibimbap and truly understand why this dish is often considered among the world’s finest. 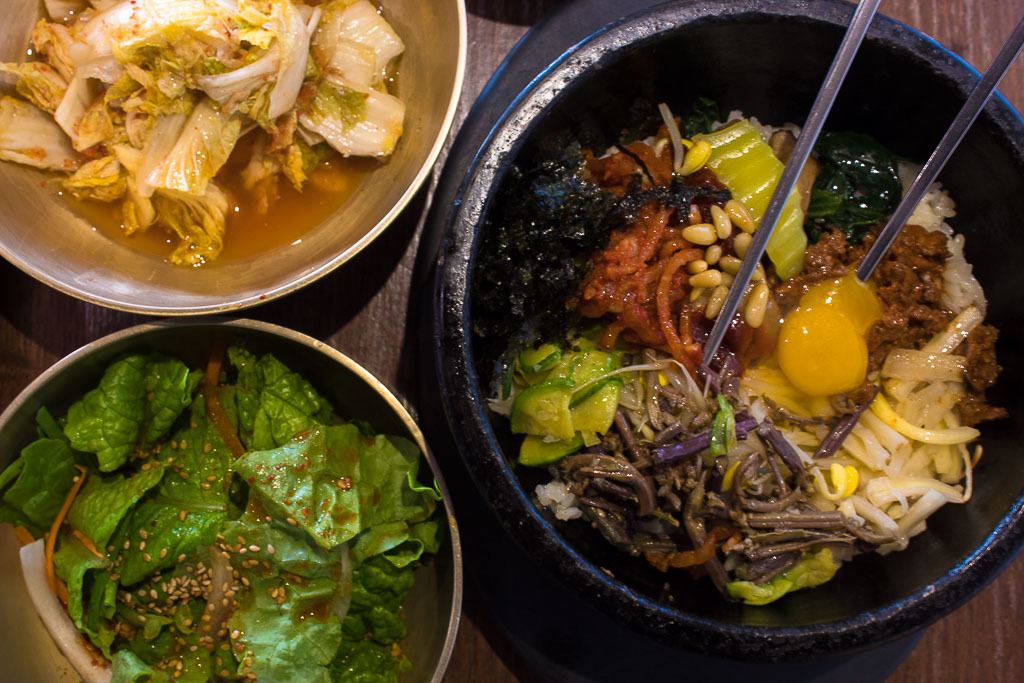 What Lonely Planet rates among the top 10 eating experiences on the planet, a bibimbap in Jeonju

4. Live in a traditional Hanok – Jeonju is home to the largest collection of hanoks, i.e traditional Korean houses with a large courtyard and minimalistic living style. At the Jeonju Hanok Village, many families have opened up homestays giving tourists a chance to live in a floor-heated Hanok and just how the Koreans have for centuries.

Other Destination Ideas in South Korea for the Winter

If you’ve more time on your hands, here are some suggestions for winter destinations that you may consider adding to your itinerary

1. Seoraksan National Park – In the far eastern side further from Pyeongchang, this biosphere reserve is spectacular in all seasons including winter. With astounding views to meet you at the top of the hike, this is among the best hikes in the country.

2. Gyeongju – The historical city plays home to the 8th century Bulguksa temple among other ruins. The Silla dynasty ruled from here and have left behind many fascinating architectural gifts for travellers to witness, including their unique garden tombs. 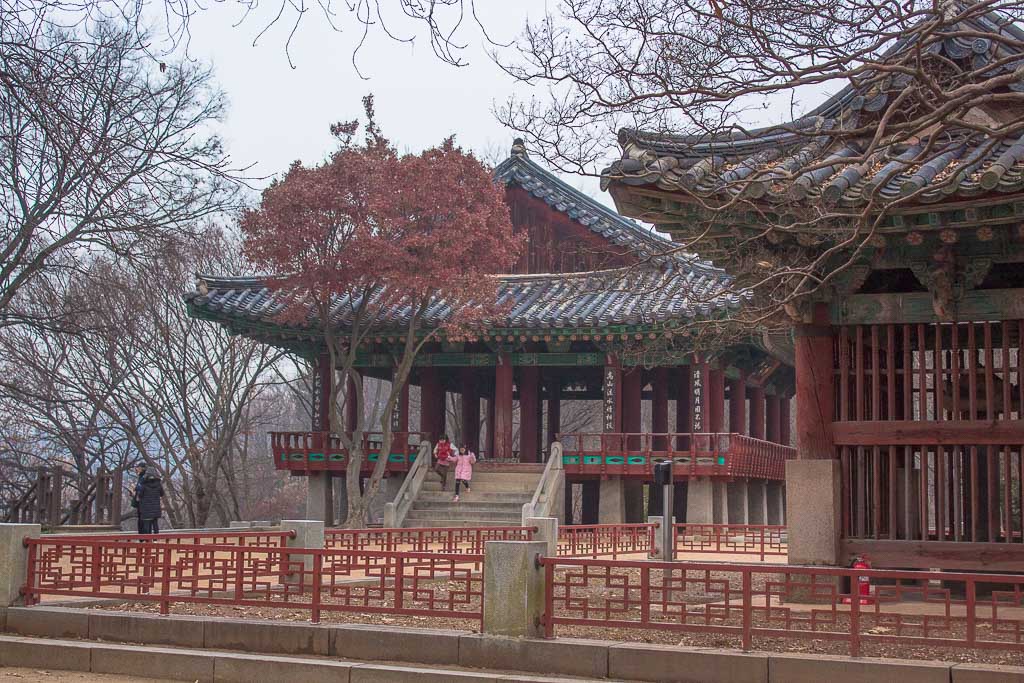 Everywhere you turn, beautiful and historic Korean temples will stare at you

1. While spending a winter in South Korea is worth every bit of the effort, it is critical to be well prepared to deal with the conditions. Unlike a lot of other cold places, what makes South Korea harder in the winter are the gusting winds from Northern Siberia.

2. Ensure every accommodation you book has a heating system. Most Korean homestays/ hotels follow a floor-heating system called ondol. Double check if this facility is available before booking, especially in Pyeongchang.

3. Dress up in multiple layers – Although the temperature can get incredibly low on the outside, most cafes/ hotels/ subways maintain a very warm temperature. As you’ll be moving in and out of buildings/ subways, it is important to be able to remove a layer or two when required.

4. While the holiday season of Christmas and New Year is not particularly big in South Korea, it is best to avoid trips to destinations like Nami Island on a weekend or a major holiday as a lot of local tourists tend to travel at this time.

5. While South Korea has brilliant train connectivity, a road trip is not a bad idea. But, unless you have extensive experience driving in the snow, we recommend sticking to public transport. In regions like Pyeongchang local buses operate even in the deep winters.

6. Korean subways are a haven for shoppers. So, if you’re from a warm country and do not have a lot of winter clothes to take with you, get it on your first day in Seoul at bargain prices. The quality is top-notch, as well.

With some basic preparation, traveling in South Korea during the winters can be a charming affair. It will win you over before you blink your eye. 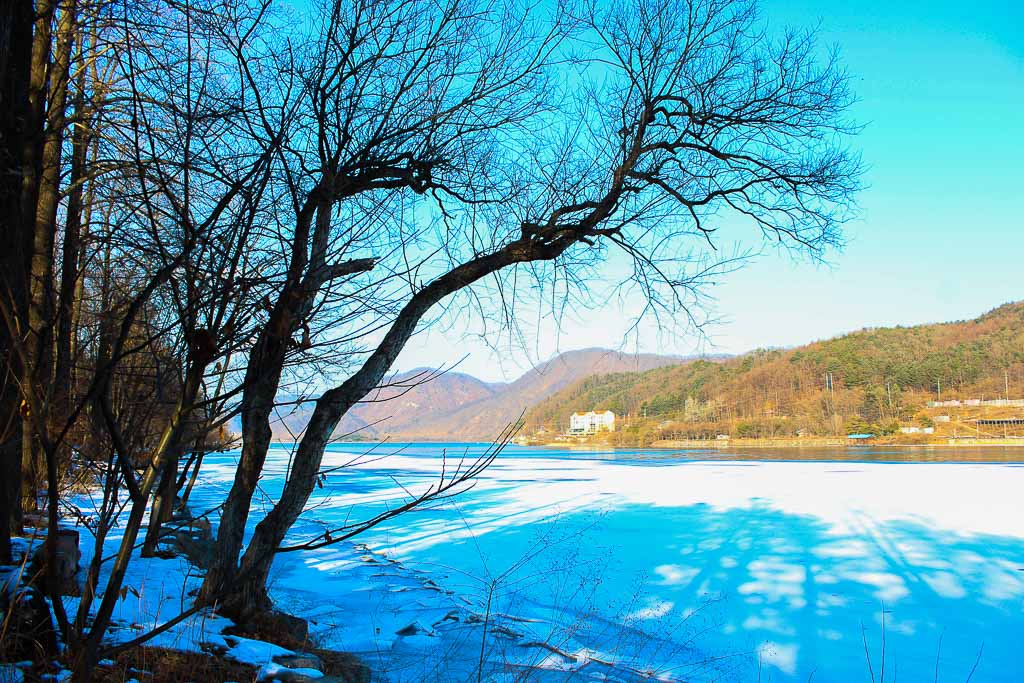 Consider spending the next winter holidays in South Korea, you’ll be thoroughly surprised!

Pin this winter itinerary for South Korea for later: 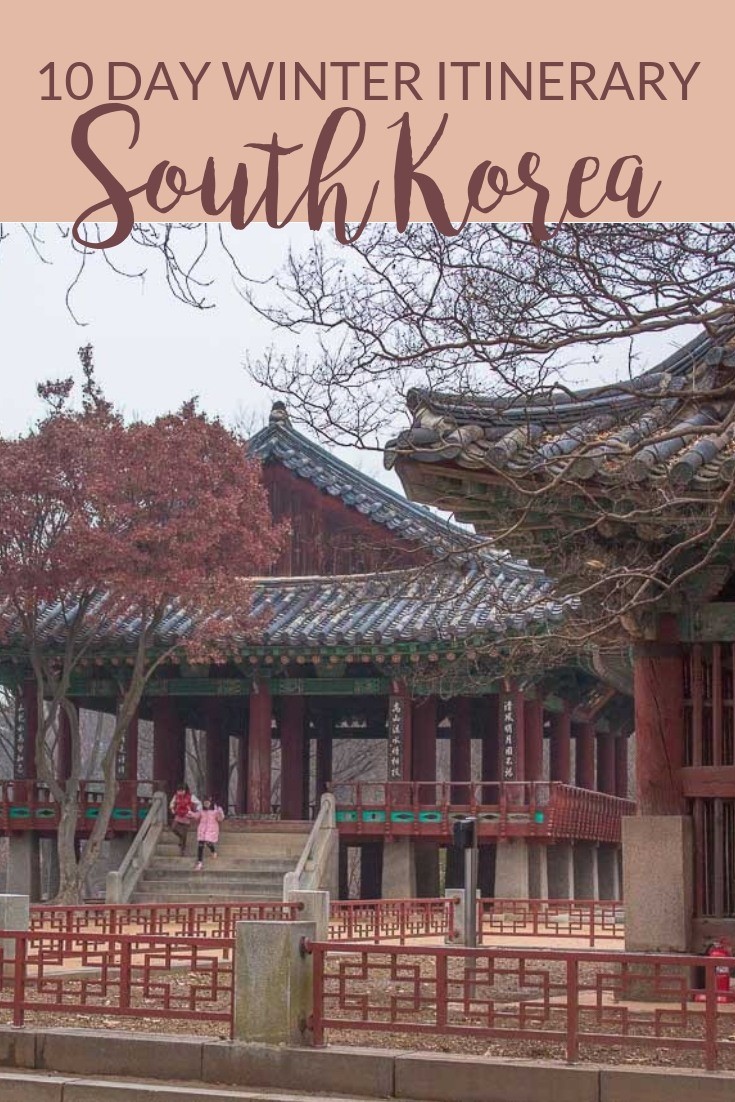