10 Things to Know Before Taking a Bandhavgarh National Park Safari

Going on a safari in India is on so many India travel bucket lists. After doing it and seeing a tiger, I can say it is really SO worth it – even if you have to fly half way across the world. I have done many safaris in India, but the Bandhavgarh National Park safari as the best because I finally saw a tiger. It is one of the most amazing memories I’ll have from being in India. I have traveled all over India and lived there for five years, but this might be the most special experience I’ve had in India.

There are some things to know before you go on a safari in India, so I’m going to share some tips so you are as prepared as you can possibly be! You might already know, but Bandhavgarh has more tigers than any park in India. 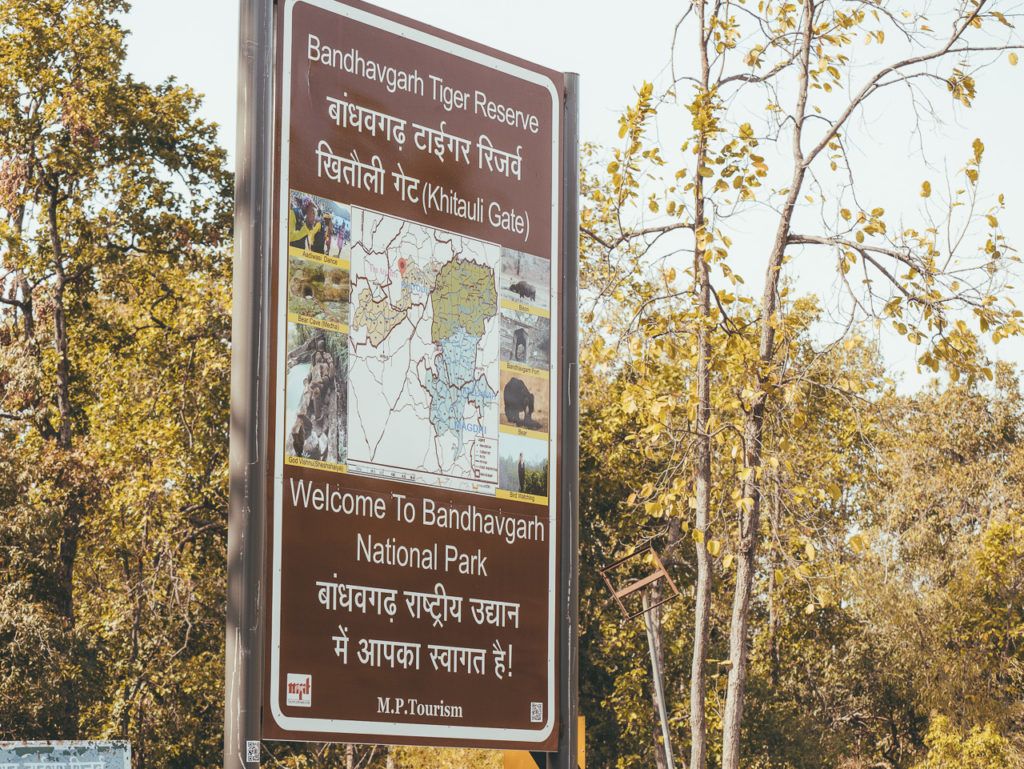 Getting to Bandhavgarh: The park is in the state of Madhya Pradesh. The easiest way is to fly into Jabalpur and then take a four-hour car journey into the area of the park. The nearest village is Tala. Your hotel will probably arrange this for you. I flew Spicejet but Air India fly there as well. It’s a tiny airport! You can also take local buses (do not recommend as it will be a lot of bus changes and take ages!) or take a train to Umaria then a taxi.

things to know before you take a Bandhavgarh National Park safari

1. You really should book a hotel before you go

It’s best to have a hotel set up ahead of time so they can help with tickets and book them for you. You can book your tickets online at the MP Park website if you want and decide on a hotel, but it’s not always accepting foreign cards without issues. You can book a safari lodge that includes your drives in the tariff which is what I recommend. You can book up to three months ahead of time and you should make sure to at least book a couple of weeks ahead because there is a limit to how many cars can come into the park. 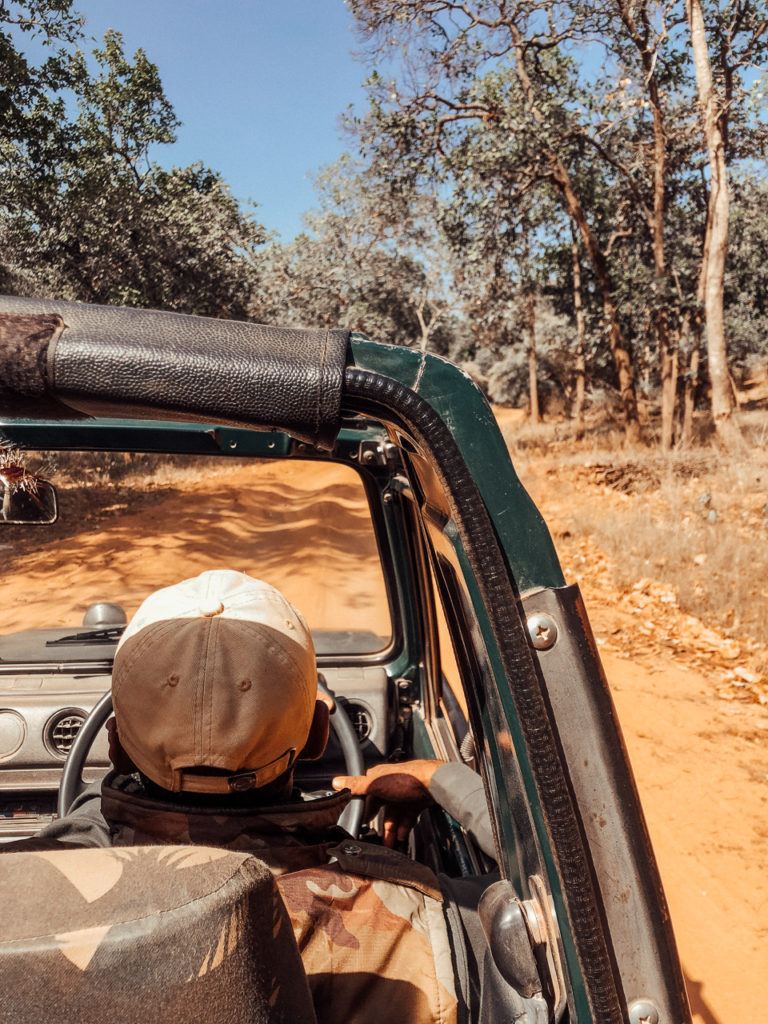 Bandhavgarh National Park safari accommodations range from super budget to super luxury. I stayed at Samode (review here) and they include the safari in the price and book it for you. It’s by far the most luxurious (and expensive) in the area. The Taj Mahua Kothi is luxury but pretty mid-range in comparison, priced at under $300/night. Pugdundee Safaris King’s Lodge is less than $200 a night and very very nice. If you look at these places, you’ll see that most luxury ones like this include the safari in the price (and food and drinks) so make sure you think about the inclusions to see what the best deal will be).

If you look on hotels.com and booking.com with Tala searched (it is on those links) you can see a wide variety of Bandhavgarh hotels and resorts from around 2,000 INR and up (under $50). Typically these budget ones will not arrange your park tickets.

2. Park tickets need to be booked way ahead of time

There are limited tickets for the parks. You must plan ahead of time for a safari. Bandhavgarh safari cost is the same for foreigners and Indians, even though it didn’t use to be. It’s 1,500 INR for the permit fee for a whole Jeep and then you have to rent the Jeep (and driver) which is 2,500 INR. You also have to take a government guide with you which is a few hundred rupees.

If you aren’t coming in a group, the permit fee is 250 (not taking a whole Jeep for 1,500. Bandhavgarh National Park charges aren’t that high in my opinion and even for a budget backpacker, this is something to make sure you put in your itinerary!

So if you are backpacking and want to go on your own, then you will get a single person permit fee of 250 then when you arrive, you will have to split the cost of the Jeep hire with whoever else is in the Jeep.

3. The park isn’t open all year – AND it does get very cold

The park isn’t open all year and closes for the monsoon months of July, August, and September. In May and June, it’s likely to see more tigers because it’s hot and they search for water, but it’s very hot on the safari for the visitors. December and January are peak months and so it’s crowded. I went in March and it was perfect, but honestly still crowded. The park is always closed on Wednesdays and some holidays.

The park is 105 square meters and divided into three “core” zones. Each zone can have 20 cars maximum in it at a time. The park is closed for lunch so you can do a morning safari or an evening safari. If you want to do an all-day safari it costs a lot more and you’ll need to get a special permit.

The core zones are called Tala, Magdhi, and Khitauli. There are also buffer zones. You don’t get to pick your zone if you go through a hotel, because they do it for you and it was explained to me it’s almost like a lottery and they don’t find out until the night before. You want Magdhi zone – it is the best currently. Tala was closed when I was there so they re-routed those cars to the other two main zones so it was extra-crowded but this happens often with the zones.

If you book online, you should be able to pick your zone from what I understand.

When a tiger is spotted within a zone, word travels fast and all the Jeeps go off quickly to get to the point the tiger is located. Imagine twenty Jeeps all speeding off together, then stopping altogether in the same tiny space. 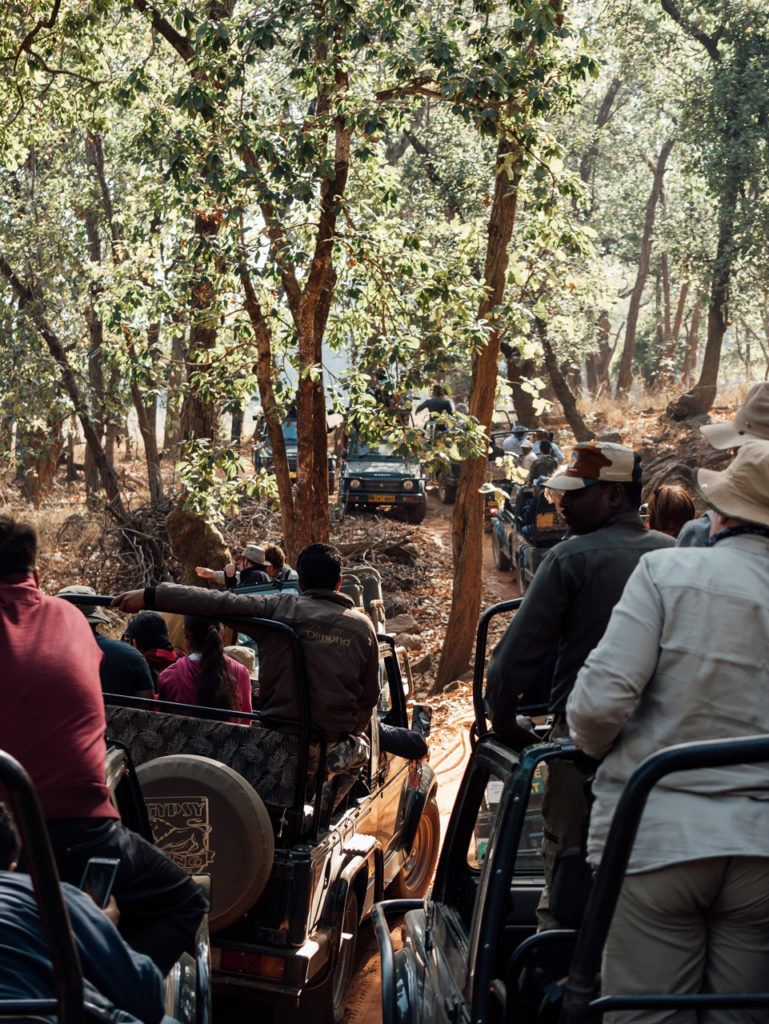 I was pretty surprised by how loud the fellow tourists were and that no one told them to be quiet. After all, we are paying a lot for this experience – because it’s MAGICAL – and it to me, should be common knowledge to be quiet and respectful. Yet, there are Jeeps that were full of tourists who were yelling, laughing, playing music on their phones, and arguing with other cars about views being blocked. I lived in India for years and am used to the noise and such but I guess I thought people would have been better behaved during such a special moment. I just wanted to shush everyone because all the yelling was ruining the moment, to be honest.

All the Jeeps make a LOT of dust and you’ll likely have a Jeep in front of you – the drivers sometimes spin the tires out and create more when going quickly to find a tiger that has been spotted. You will want a scarf to put over your face and maybe even hair. We didn’t have one on our first drive and luckily Samode had medical face masks. We looked crazy, but we didn’t care. 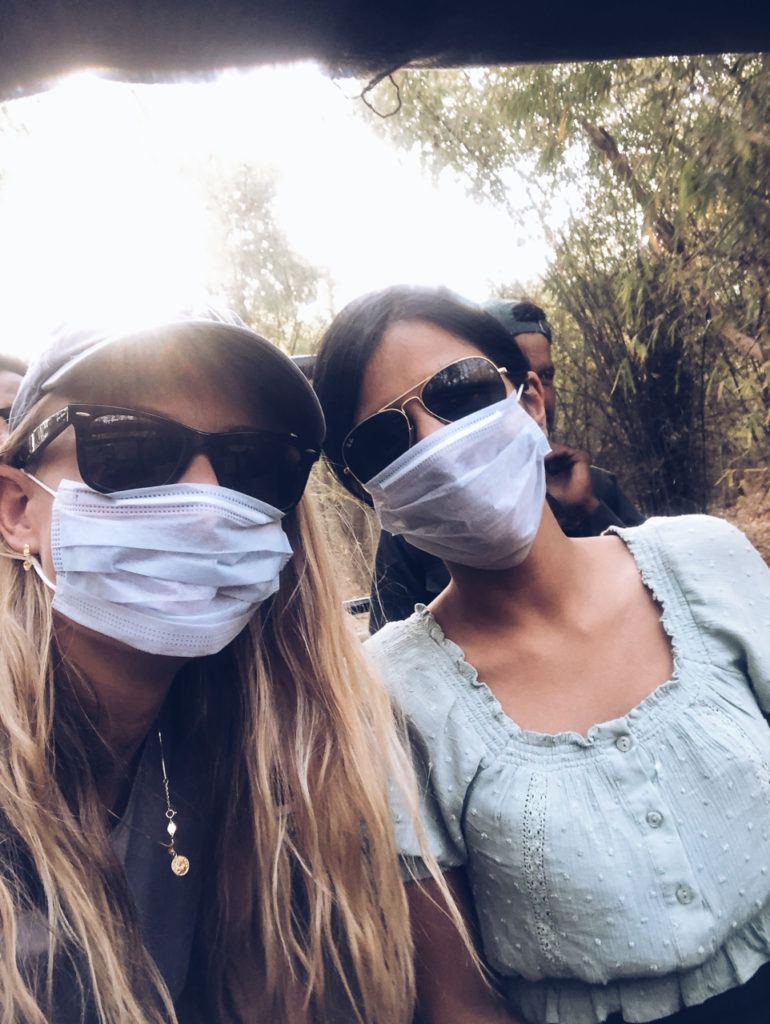 Check out my packing post (coming soon) for tips on what to pack and how to protect yourself from all the dust.

6. Tigers are hard to spot and you *might* not see one

It’s no guarantee that you see a tiger! While sometimes they come into the open and you can have a clear view, it isn’t always the case. The first sighting we had, I couldn’t SEE the tiger at first, after all tey are good at camouflage. I saw three one one safari ride and on another one, saw zero.

Can you see the tiger below? He’s there!

7. A government forest guide will go with you

Even if you stay with a luxury hotel that has it’s own guides and safari vehicles, you will still have a government guide go with you in the car. This is to keep things safe and make sure you leave the park when you are supposed to, don’t get out of the car, and they will help find the tigers.

8. Yes, it’s an open Jeep and no, the guides don’t carry guns for protection

The cars are Gypsy’s and they are open. There is nothing there for protection. If a tiger wants to attack you, it will. They HAVE jumped on the hood of Jeeps before – my guide told me! But, that was once so don’t worry. There is a limit of how close you can be to the tiger and while it could sneak up by you and has walked right up next to cars, that is so so rare. 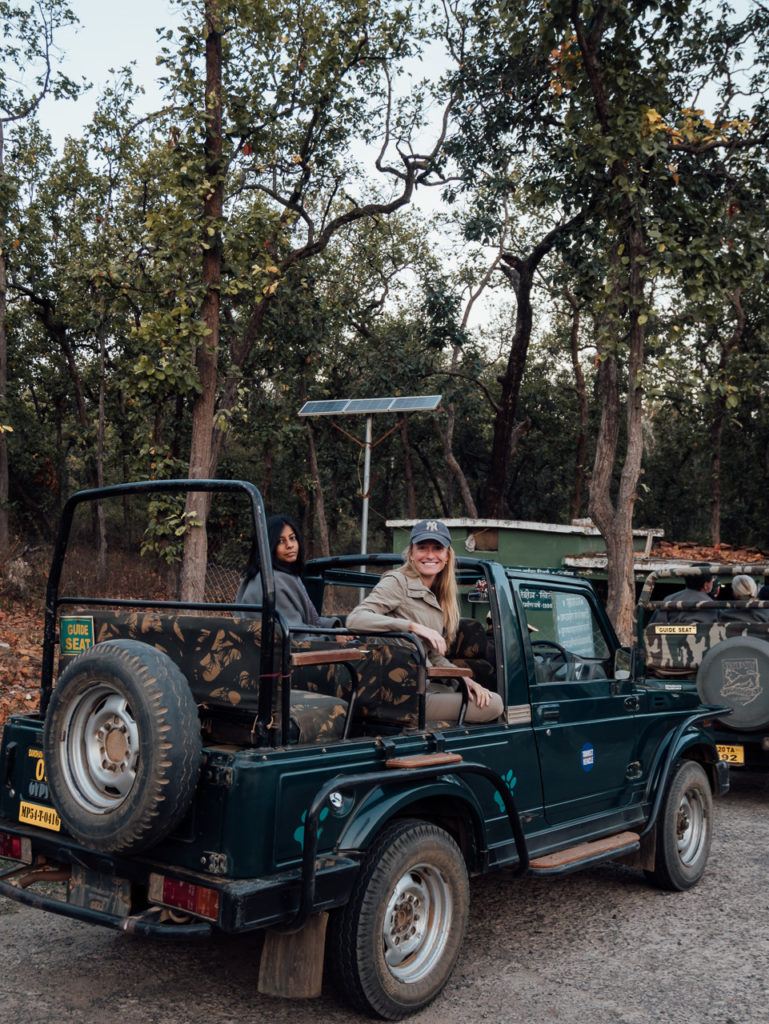 When you see a tiger coming toward you, it is the driver’s responsibility to then drive off. There is a distance they need to keep and the tiger is in charge so if it comes toward you, you must back away. 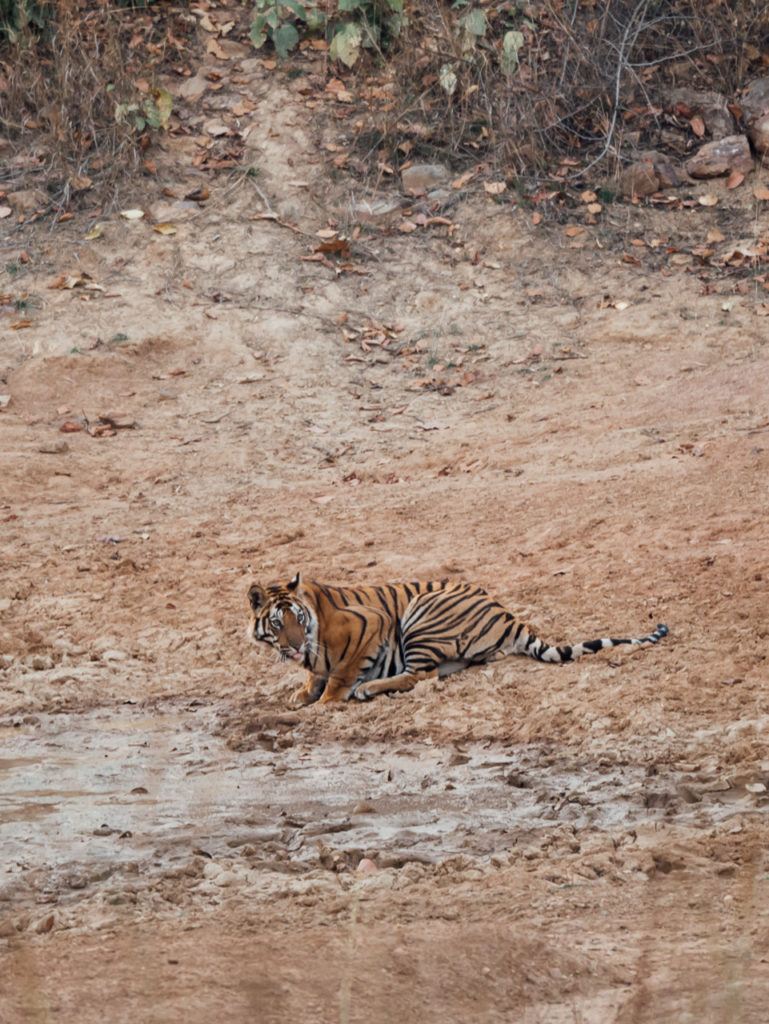 10. There are no wild elephants – and if they come, the zone will close

This park isn’t known for wild elephants. They just haven’t been in this area – but that doesn’t mean they don’t come sometimes. They are having their land taken and so they get displaced but it sort of messes up the vibe of the zones and is dangerous for the tourists because they will charge vehicles. They closed the Tala zone while I was there because a wild elephant came into the zone. 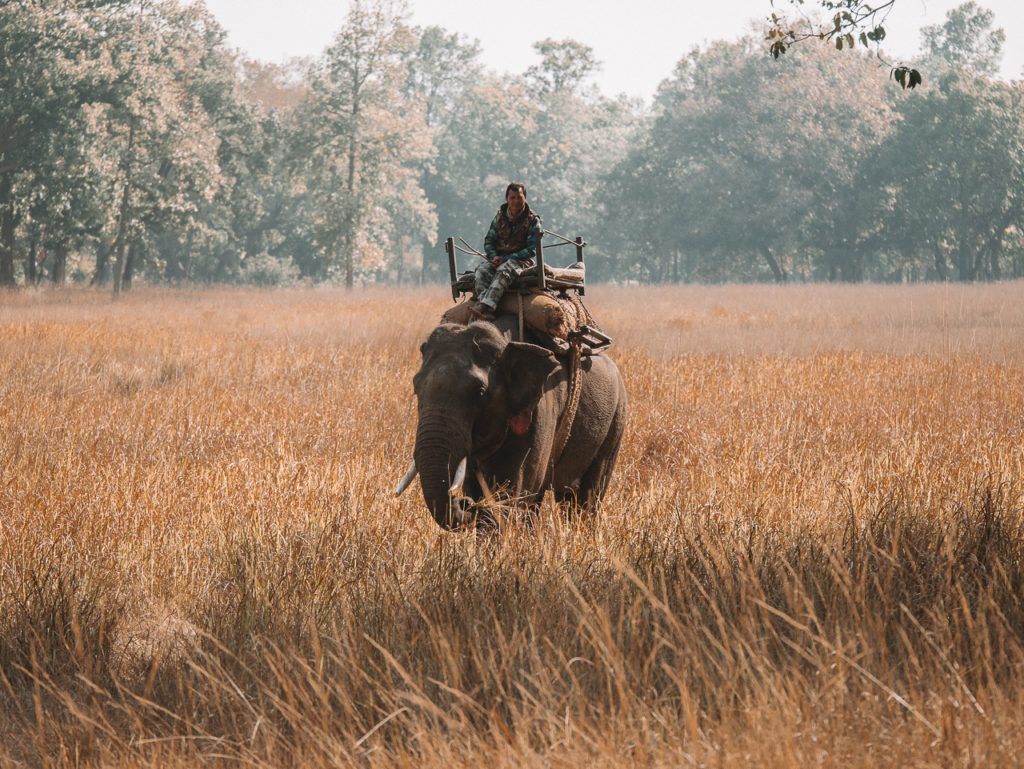 If you do a full-day tour, they might offer you an elephant ride. There are elephants that the patrol guides use to make sure the tigers are in the zones and not going out to the villages. They have tamed elephants for this reason forever and always will – but taming this for tourism isn’t cool. While I’ve read there are elephant rides, I did not see any there and none were offered so I hope they have stopped them. Avoid the elephant rides if it is offered to you.

Pin these tips for Bandhavgarh National Park safari in India for later! 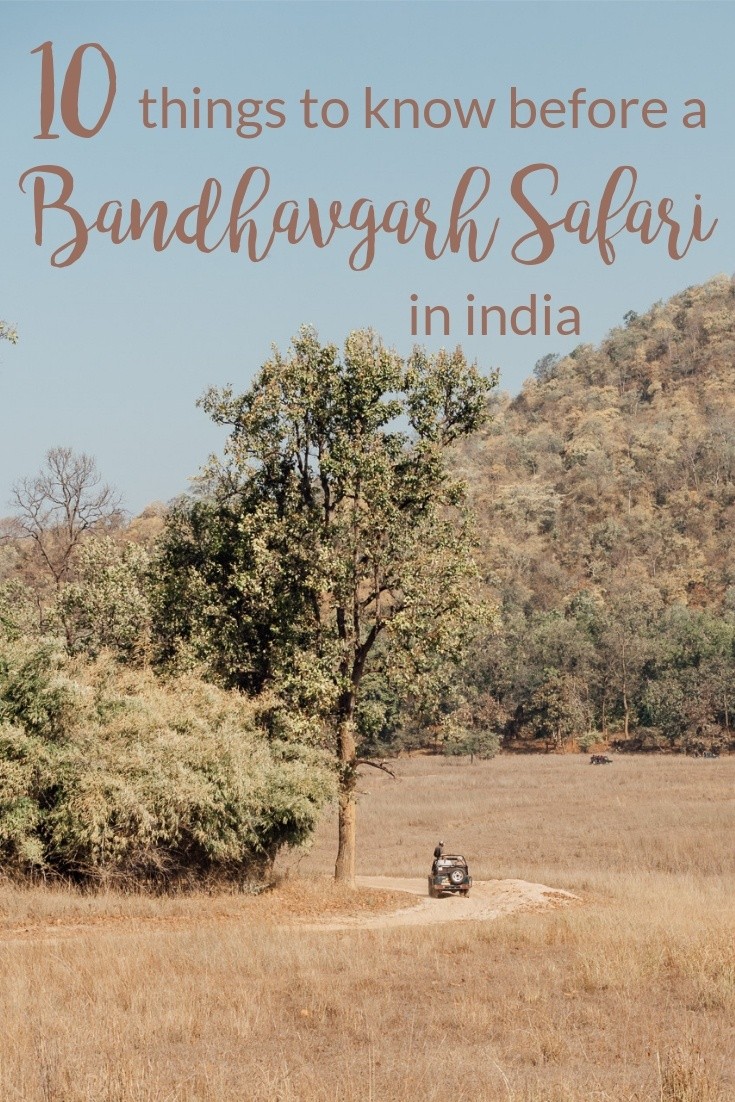 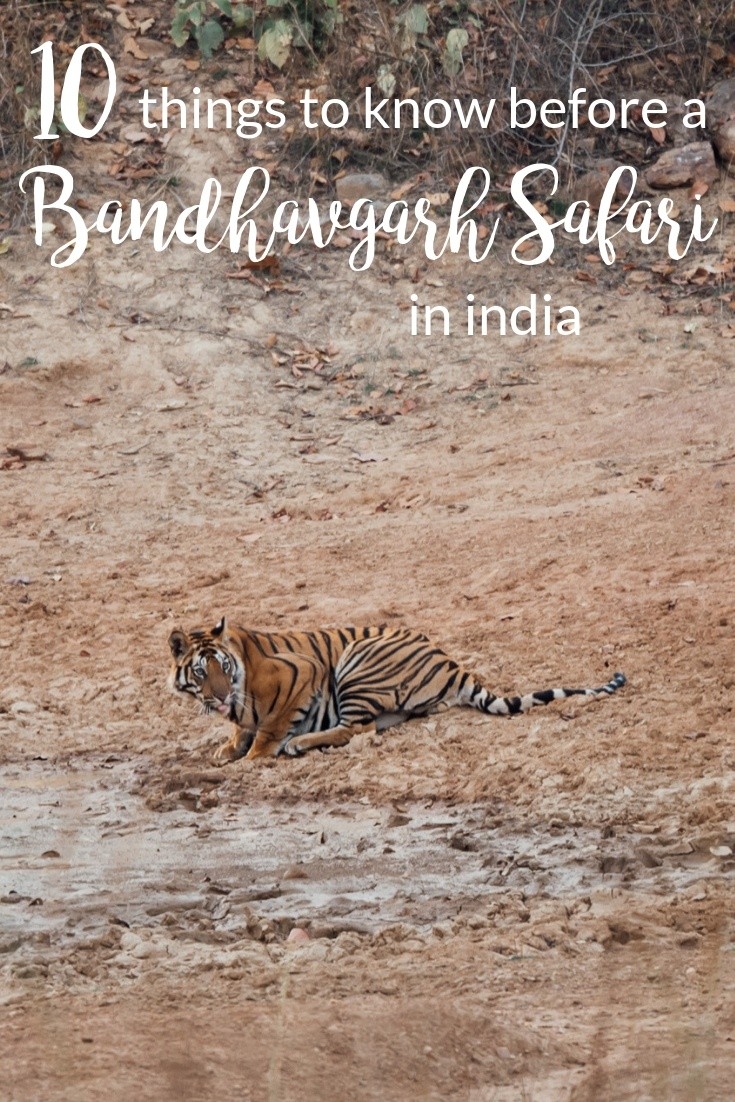