There are thousands of cenotes in the Yucatan. Cenotes were actually made when the asteroid that killed the dinosaurs hit earth! You can read about the giant crater the cenote created, the Chicxulub crater, at that link. Living in Merida, there are so many cenotes near Merida to choose from. While it’s fun to tour around and check out small off the grid ones, like this one, sometimes you want something *perfect* that will be good for when family and friends come to visit you. 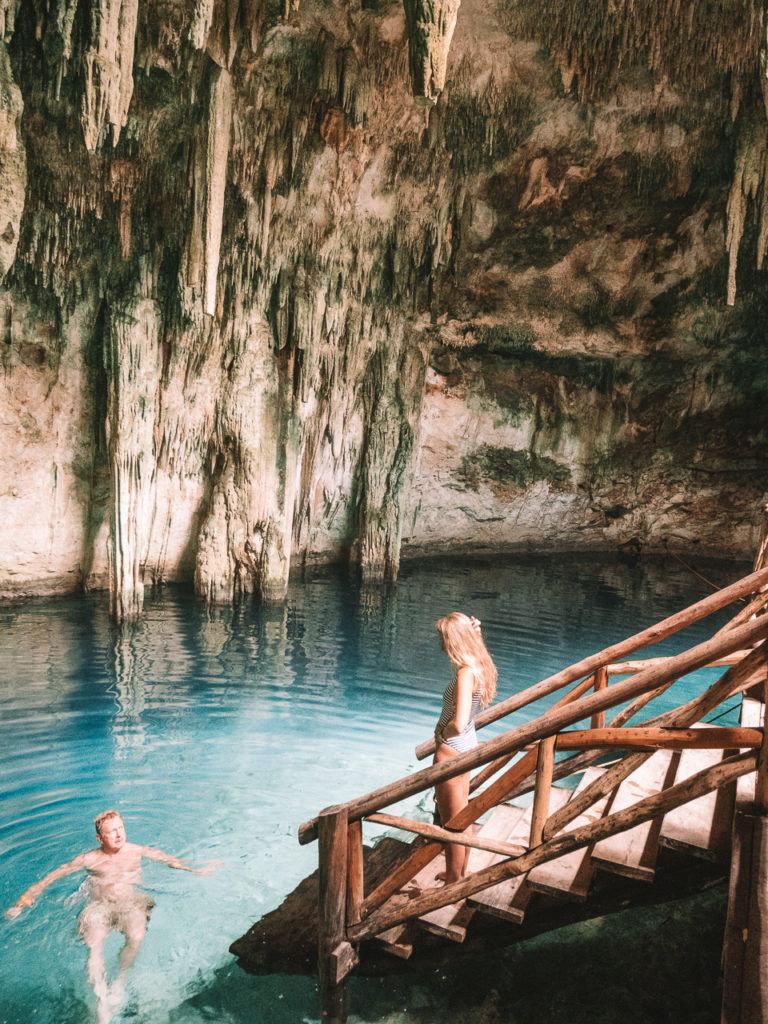 For me, the best cenotes in Merida to take my family to are the Santa Barbara cenotes at Homun. If you ask most locals which is your favorite cenote, they will often say “Homun!” without even thinking. At Homun, are the “Santa Barbara cenotes” which is a set of three cenotes.

Upon arrival, you can choose to tour just one or have access to all three. For three cenotes, the cost is 150 MXN ($7). For an additional 70 MXN, you can add on lunch, which I highly recommend. The cost includes access to three cenotes, transport between them either by horse-drawn carriage or bicycle and lifejackets. 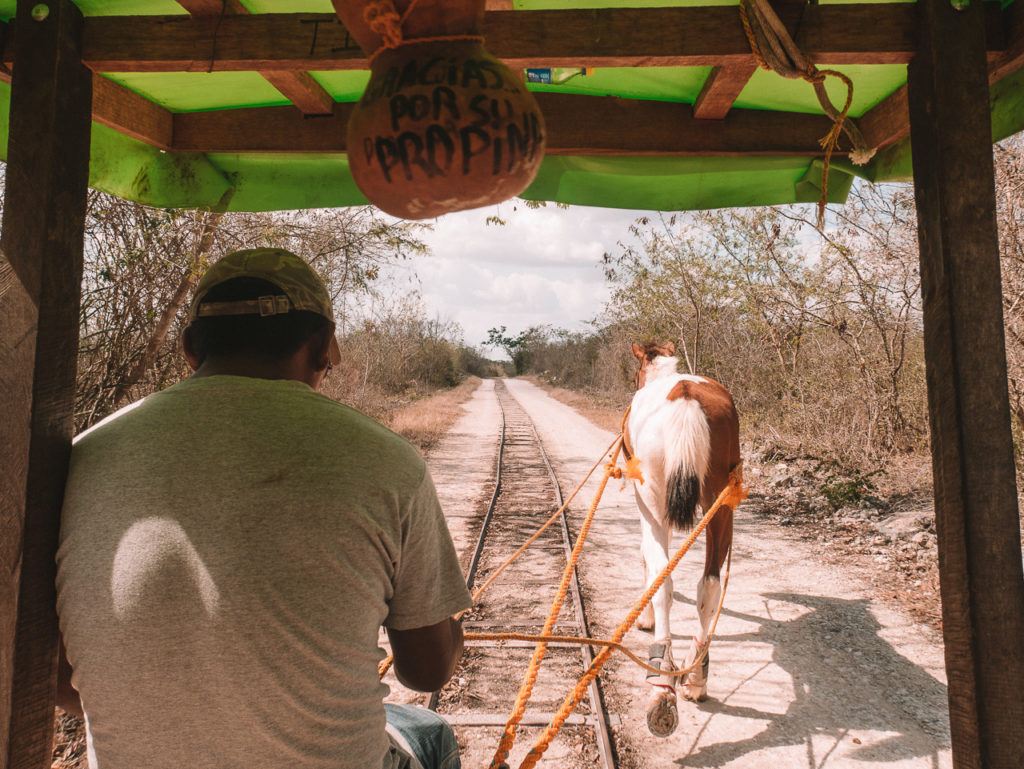 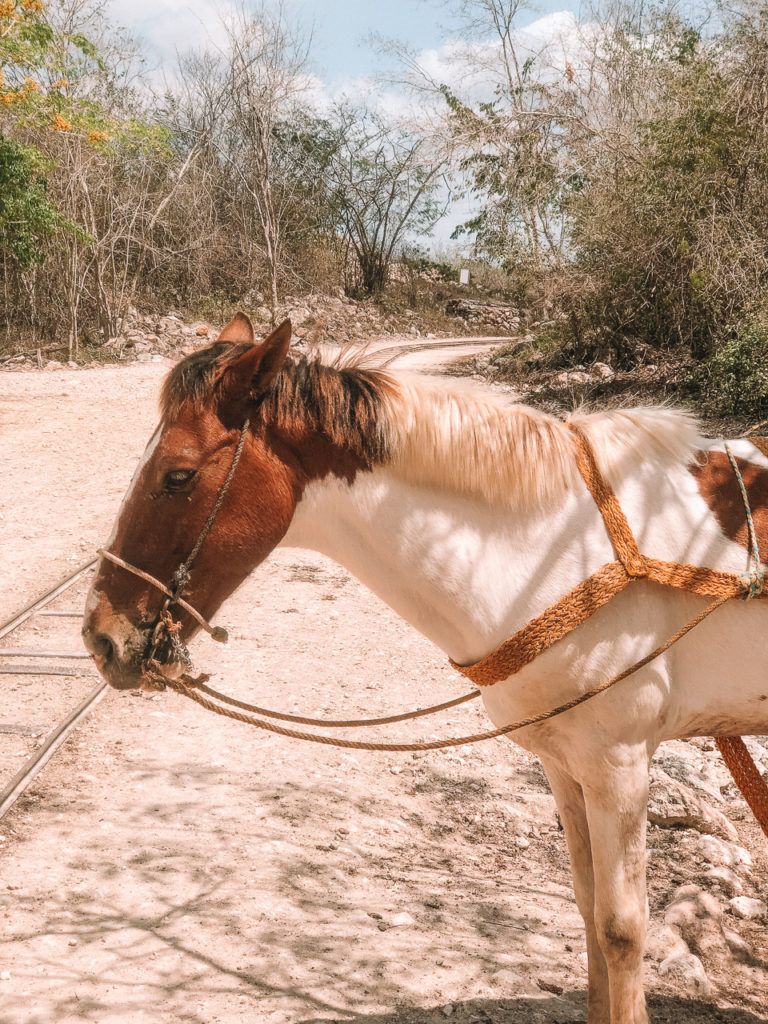 I grew up near Amish country and am very used to horse-drawn carriages but still felt a little bad riding in one. My mom did as well. I think if we went back we would ride bicycles which would be a lot of fun, but most families there used the carriages. The ride is just 3-5 minutes out to the cenotes, then you walk between the three, then you take a ride back. 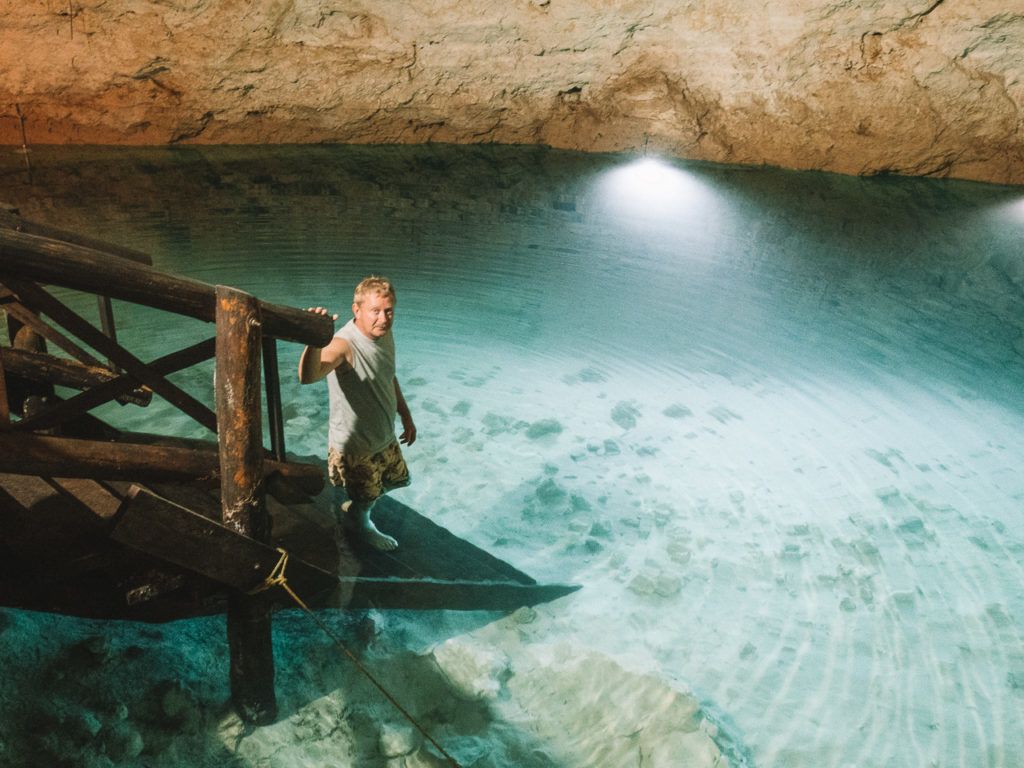 As you can see, no one is around! We arrived at 9:30. They open at 9 and we were the only ones there for the two hours we spend in the cenotes. As we headed back toward the restaurant, we saw a few families showing up and during lunch, tour buses started to come in. 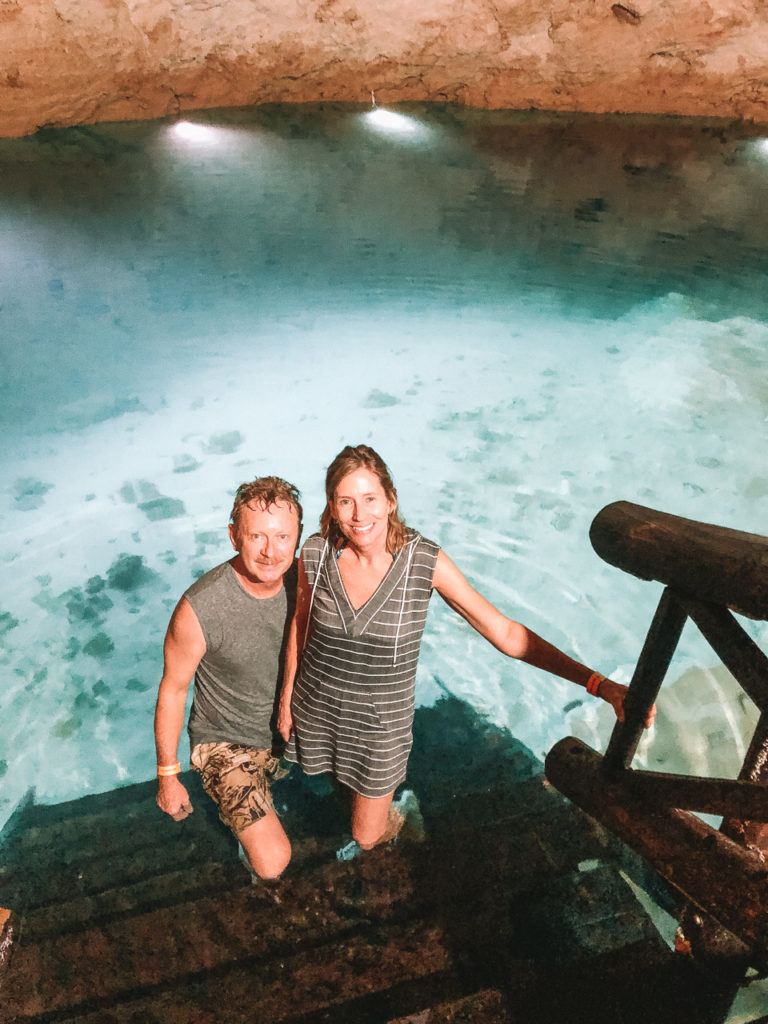 This is from the first cenote. It was dark down there in the morning! As we started walking down, even I was nervous but then the guy who worked there came and turned on the lights. It’s truly in a tiny hole. My mom was asking “are there snakes!?” but no, there aren’t. Once you get through the small hole, it opens up to a huge staircase and a beautifully lit up cenote. This was probably the coolest one.

The second cenote is just a smidge further down the path and between these two cenotes are bathrooms and a shower. There’s also bathrooms and a shower at the entrance but in case you wanted to rinse off here, it’s an option. There are picnic areas outside of the cenotes where you can sit your things and relax once you come up.

The second cenote has enough light coming down that there are no artificial lights inside. It’s beautiful. Because we got there early, we avoided crowds but that means the sun isn’t lighting up the whole place, so we could only really swim on the side that had light. 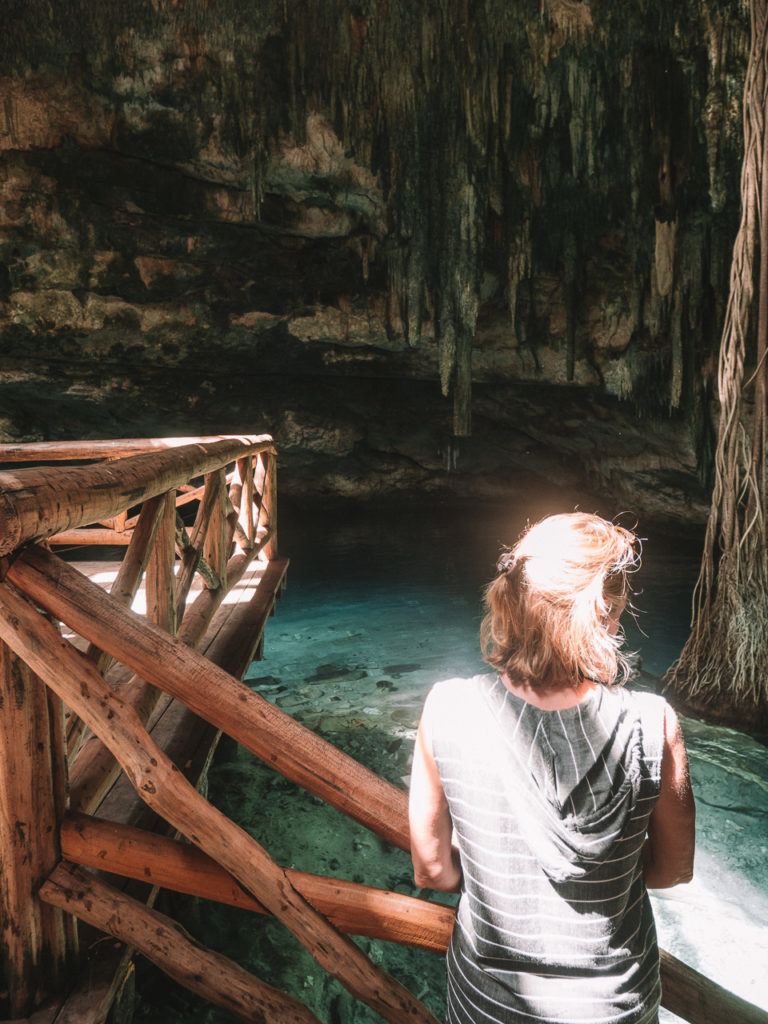 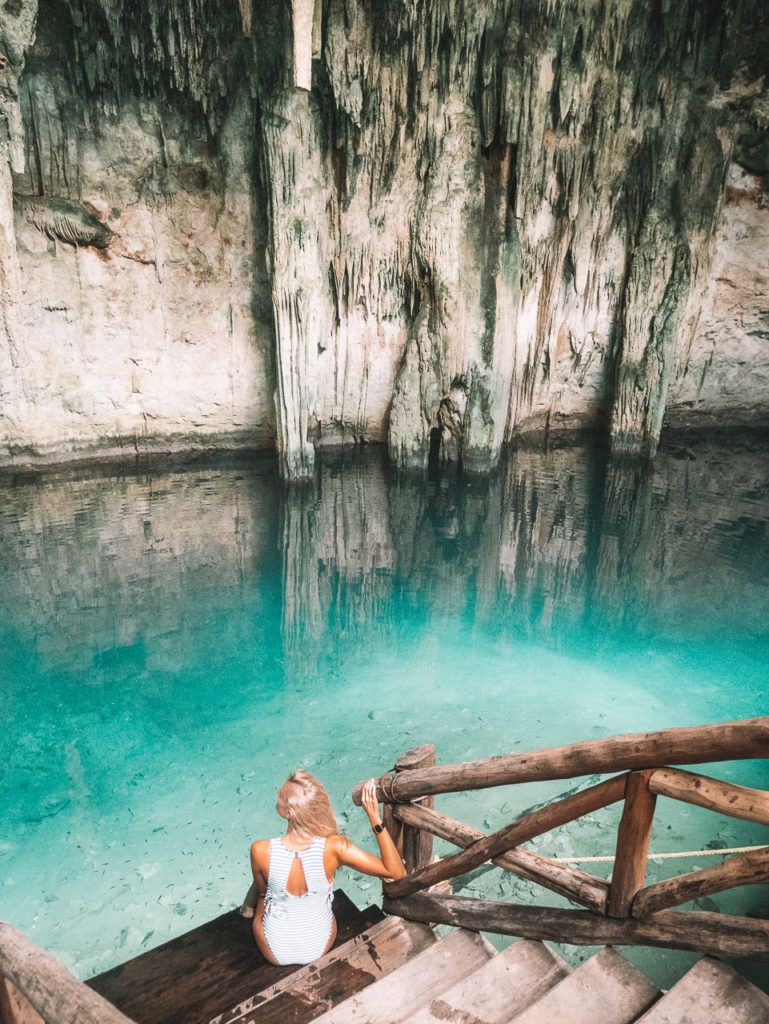 The third cenote is the most open of the three. Although it’s large, it’s maybe the least impressive because it’s so open and not really down in a hole. 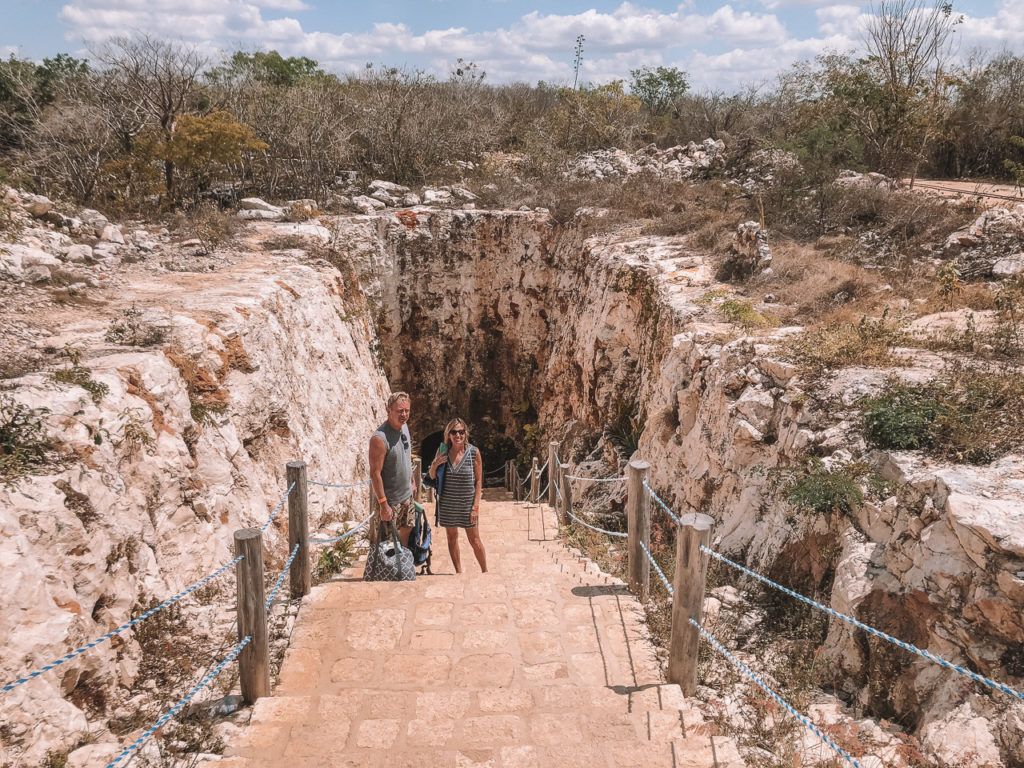 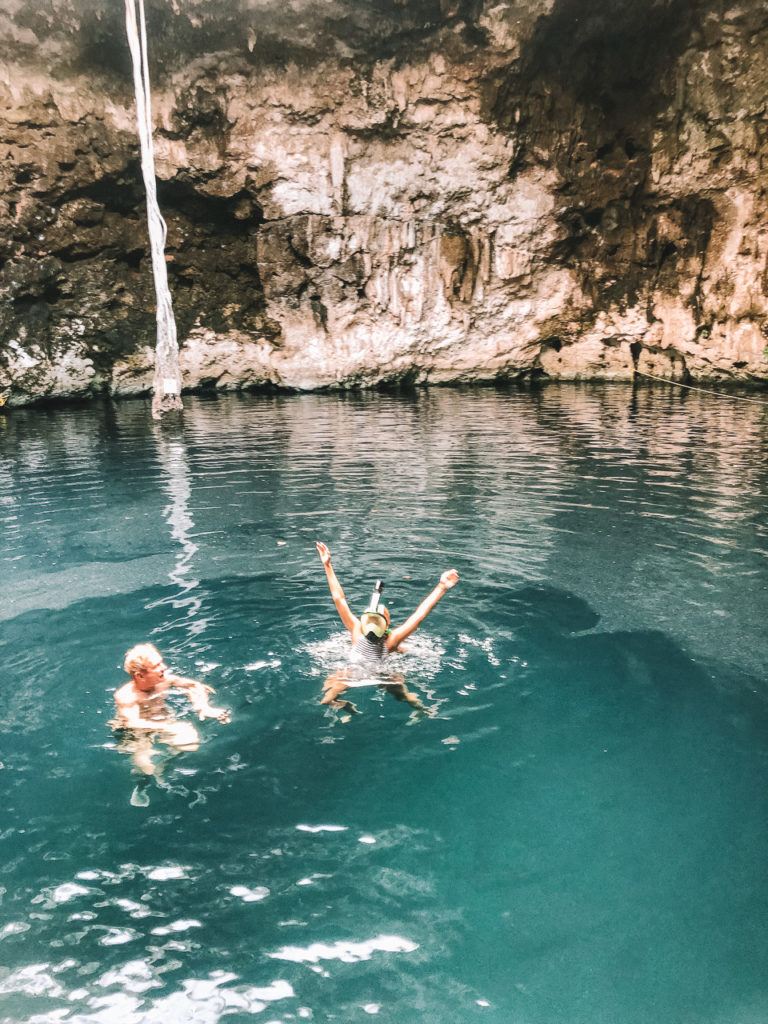 I brought the two Usnorks that I have so we could look under. These are snorkels that cover your whole face to make you look like a weirdo but also so that you can breathe through your nose or nose, whatever you like. You can also dive down and the snorkel can’t get water inside of it which makes them unique. I got it on Amazon, you can see [easyazon_link identifier=”B07G11XCF5″ locale=”US” tag=”Hipinhee-20″]reviews for Usnork here[/easyazon_link].

After the third cenote, we walked through the (not very impressive) gift shop into the restaurant. I wasn’t expecting much since it was just 70 pesos (drinks not included, but beer was I think 30 MXN) and a tourist site, but it was actually very good food. 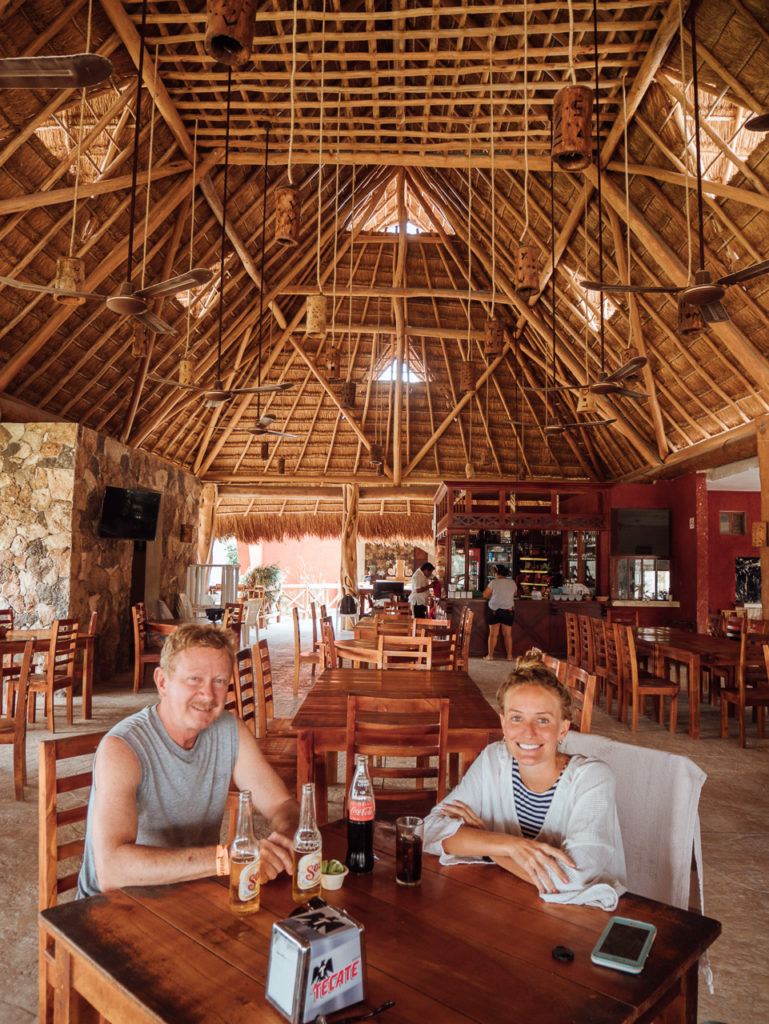 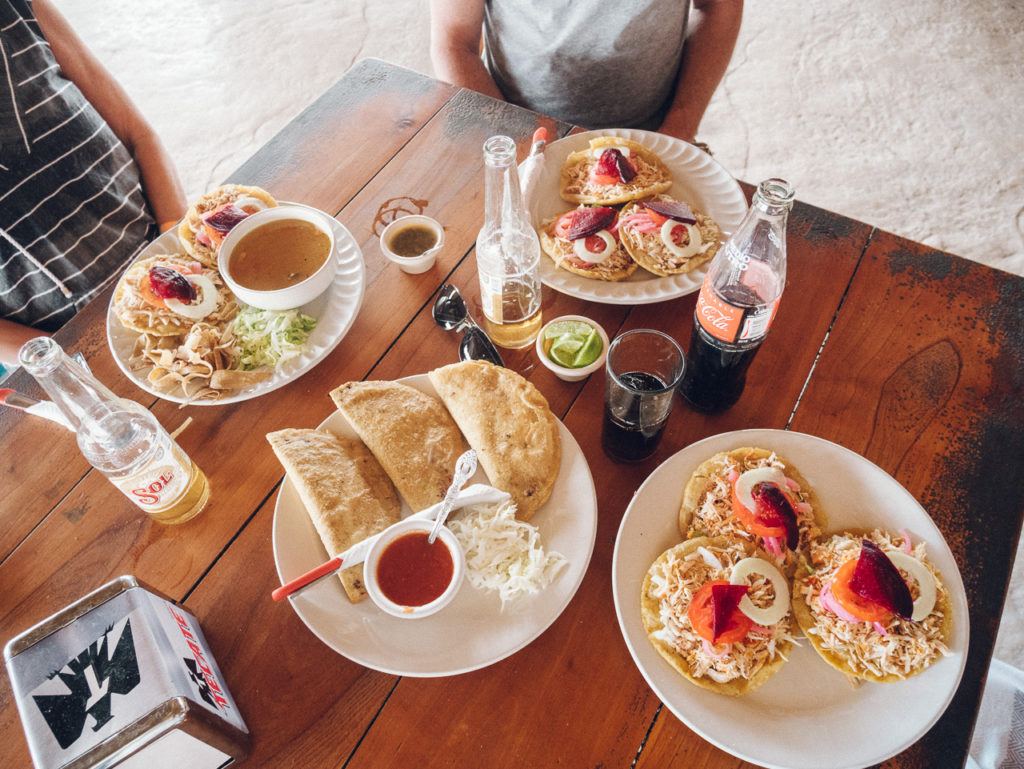 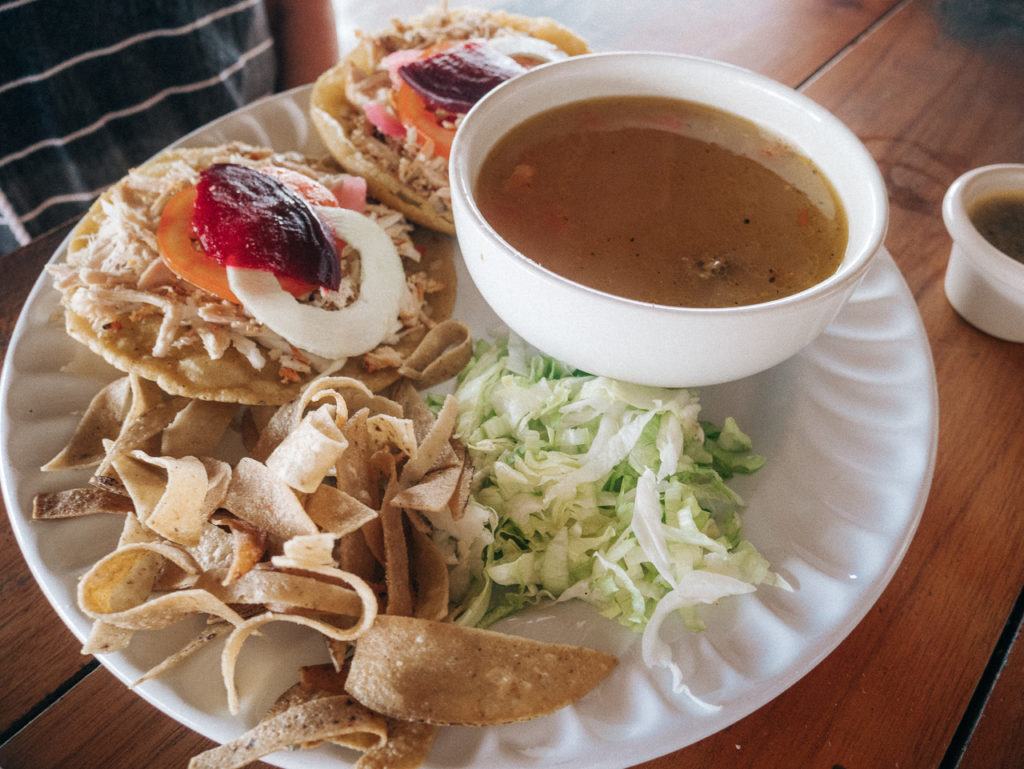 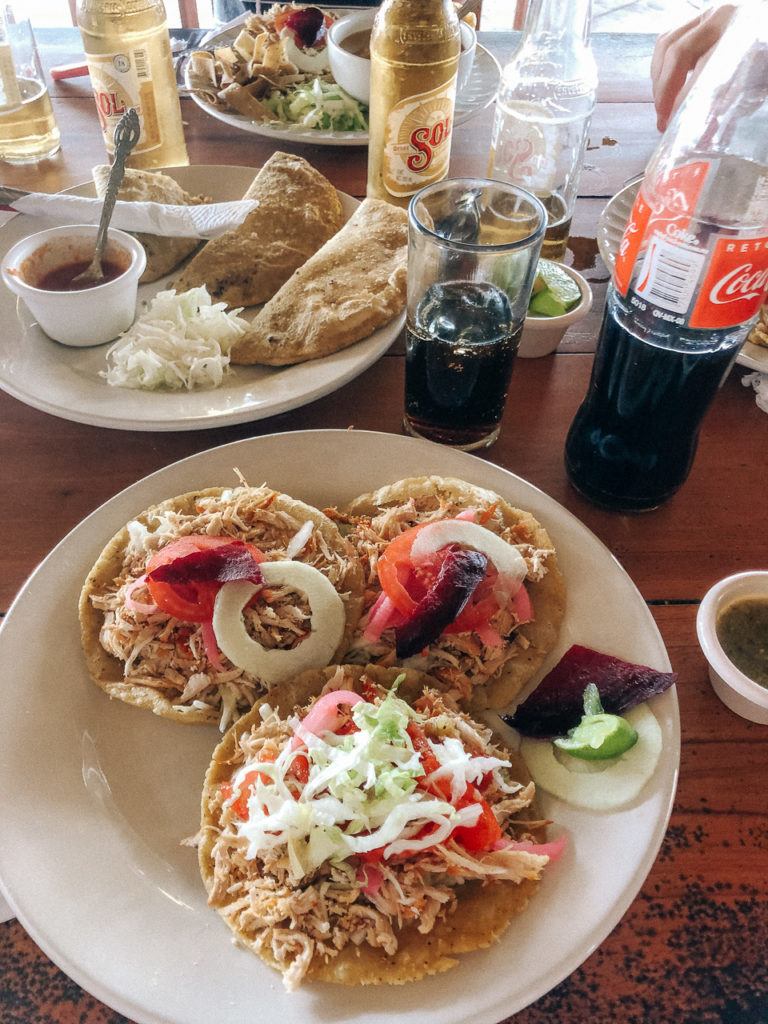 The panuchos were very tasty, the Sopa de Lima is some of the best I’ve had, and we had a starter of the beef empanadas that were very tasty. I definitely recommend eating lunch here! My parents loved the food as well.

Logistically, we drove here because I have a car but you could also rent a car which would be the easiest way. A car rental for a day can run you between $1-20 (yes, for real, tips on booking here). You can also hire a local tour company or driver for the day from many of the agencies in Centro.

What to take? The wind does make it a little chilly so bring something to cover up with after you’re done swimming. Take a hat, sunscreen, water shoes if you don’t want to go barefoot (you can go barefoot from the steps can be slippery), snorkel, and a towel.

I’ve been to many cenotes around, but you know what you are getting with this set and there are three in one place to check out, so I’d say this is the best cenotes in Merida for a day trip with a traditional lunch if I *had* to choose just one.

Pin my favorite best cenotes in Merida for later: 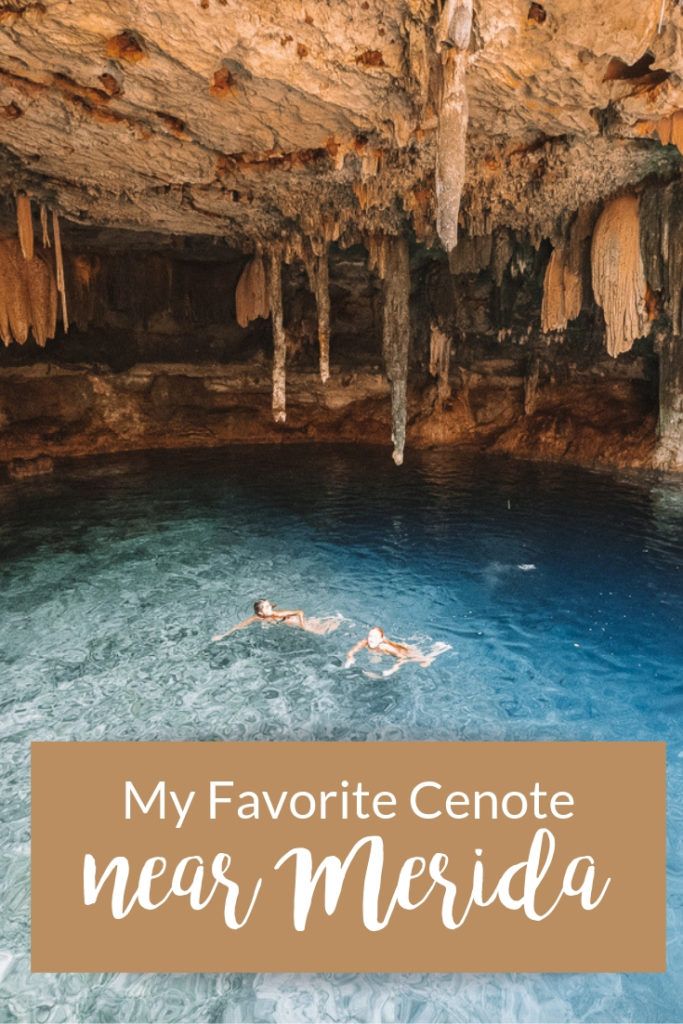