Dog Sledding in Finland was the most exhilarating thing I have done in a long time. I think part of it is because I love dogs so much and huskies are so cute especially when they are in the snow! 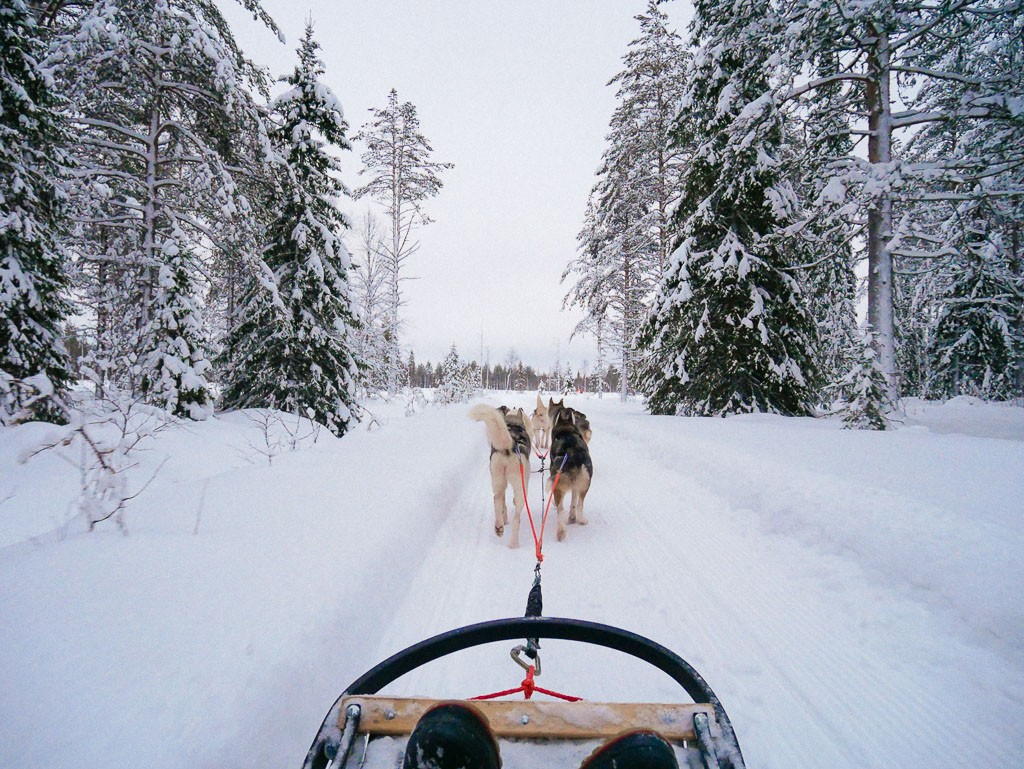 I did this activity in Oulu, which is about an hour’s flight from Helsinki. It’s in Lapland, Northern Finland, which is a region that crosses over to Sweden, Norway, and Russia. It’s the Arctic circle area.

When you think of Lapland usually Santa Claus, Reindeer, and Northern Lights come to mind. And of course, huskies! This was what I was most excited about in Finland. 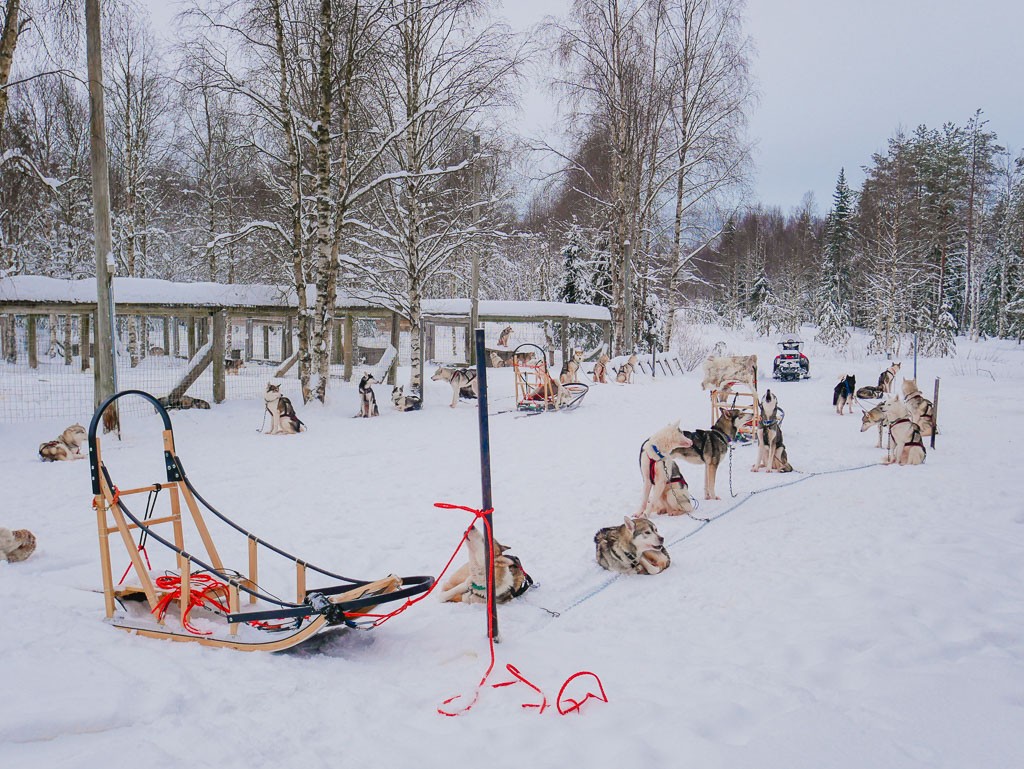 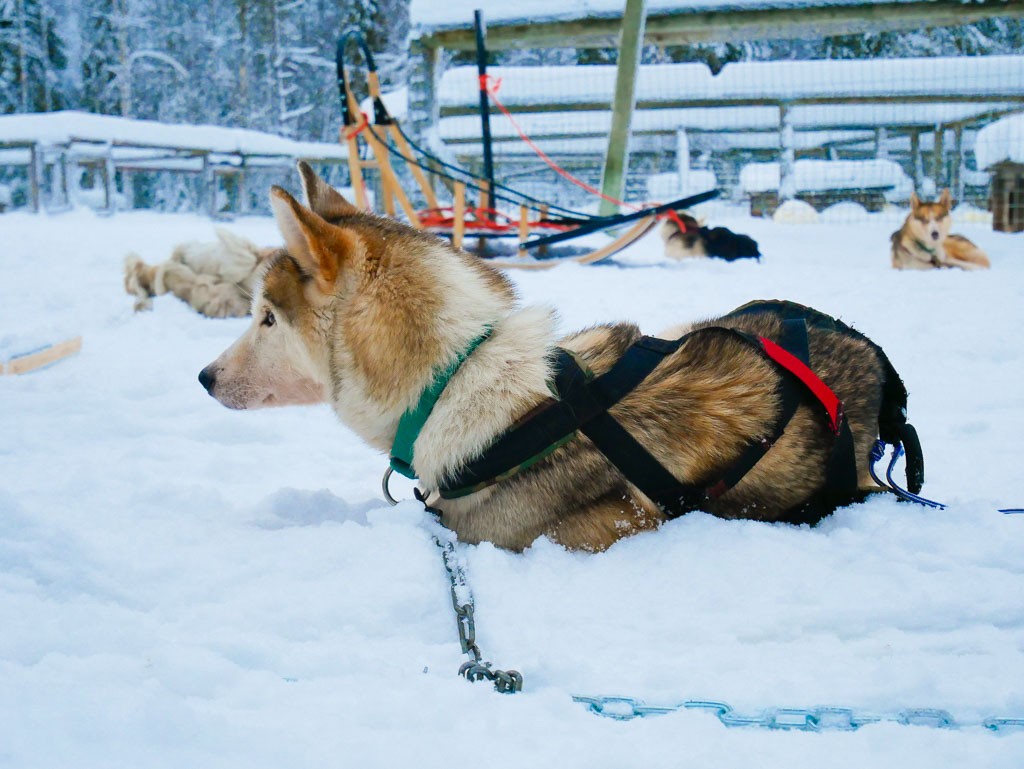 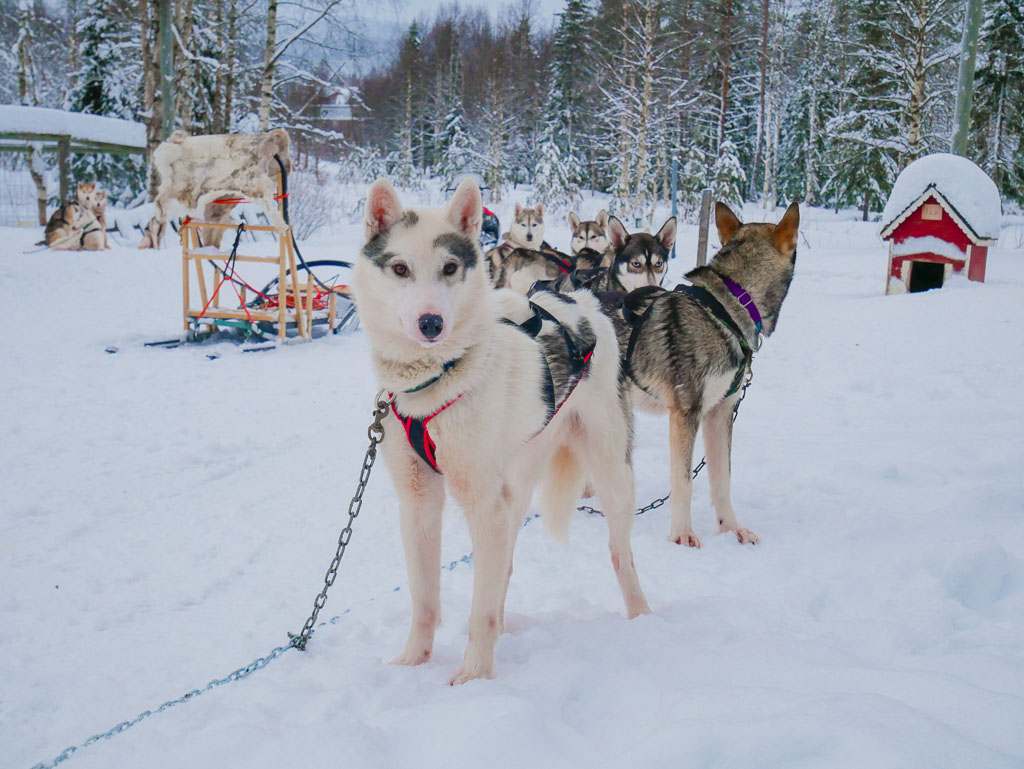 These dogs actually LOVE the cold weather and it is okay for them to be in the cold; in fact, they would never come inside and sit by a fire. Their feet are made for cold weather and their little hairs are all hollow and allow for a kind of insulation.

The woman in charge, Husky Mama, loves her dogs. She knows them each by name and after our dog sledding adventure, she sat while we drank cocoa in a Lappish tepee and told us stories about some of the more outrageous things and trouble the dogs had gotten up to! 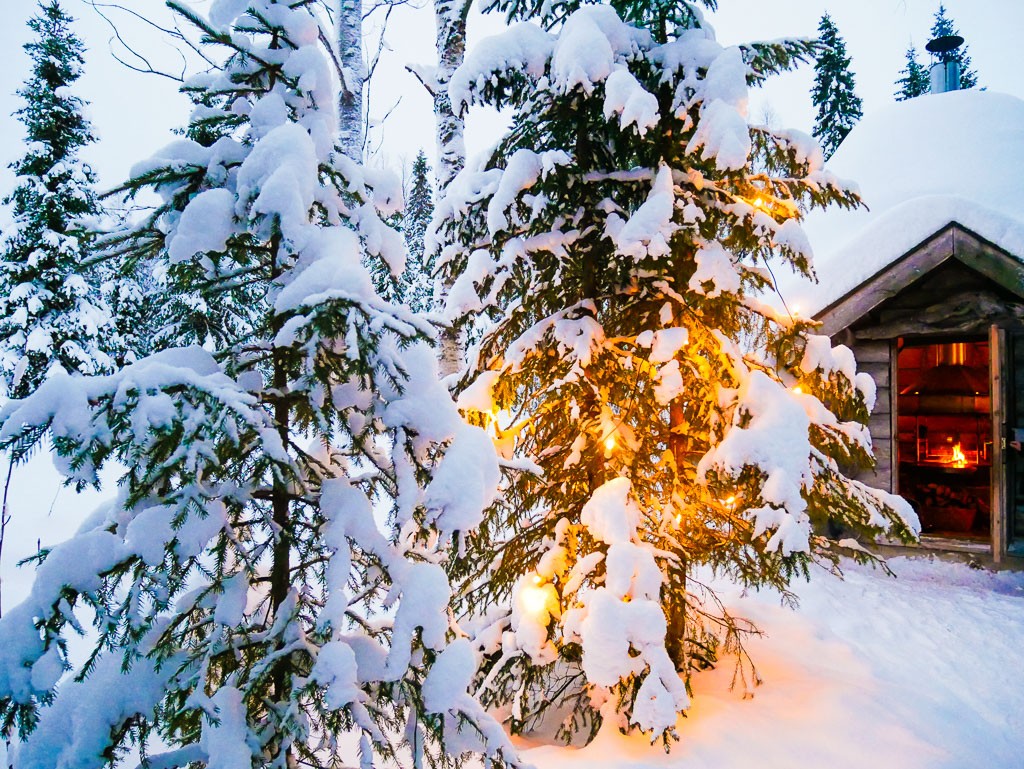 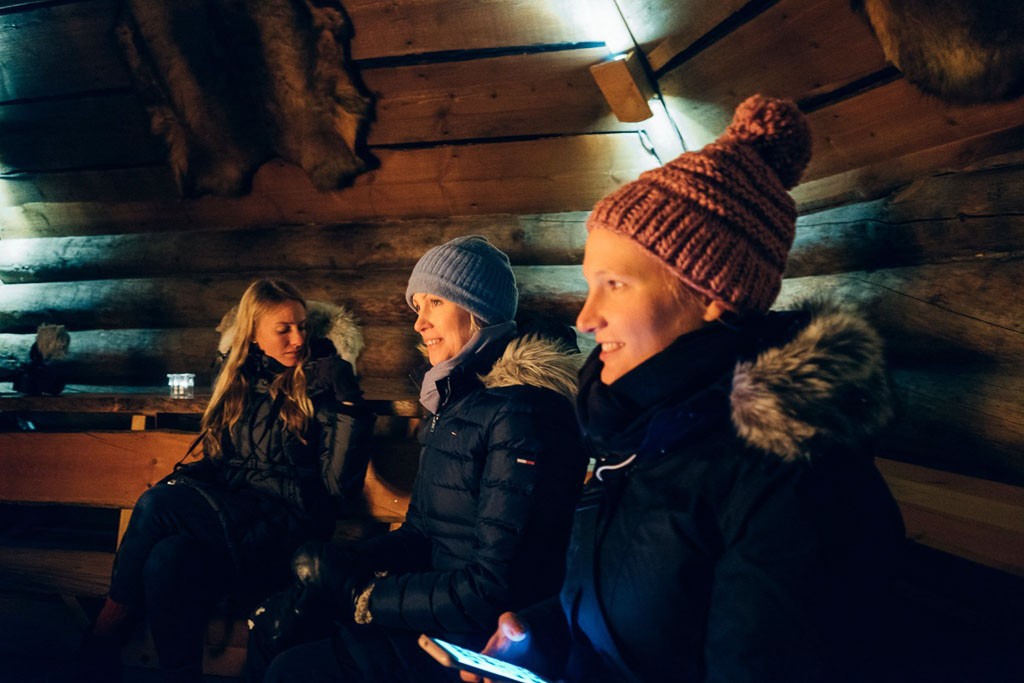 What it’s like husky dog sledding in Finland & how to prepare!

So, we showed up with our winter clothes on and were quickly told that we should change into their snow jumpsuits. It was about -12 but the wind made it feel a lot colder. We changed into the safari’s boots and snowsuits, plus added on their gloves and hats before going outside for our lesson. 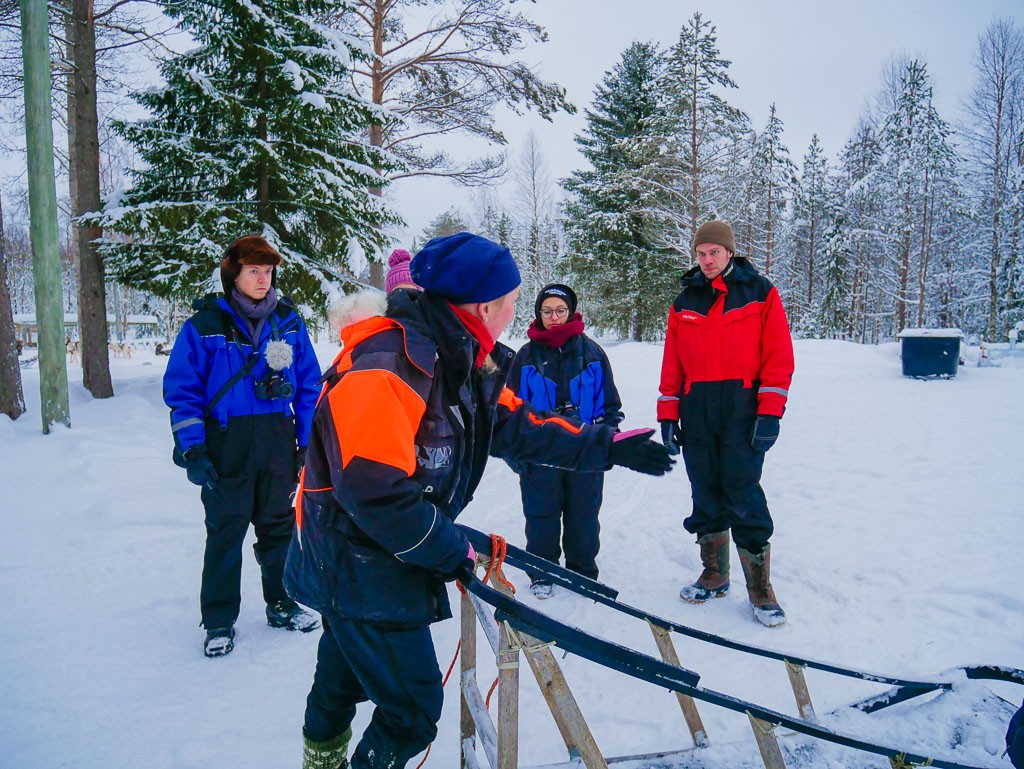 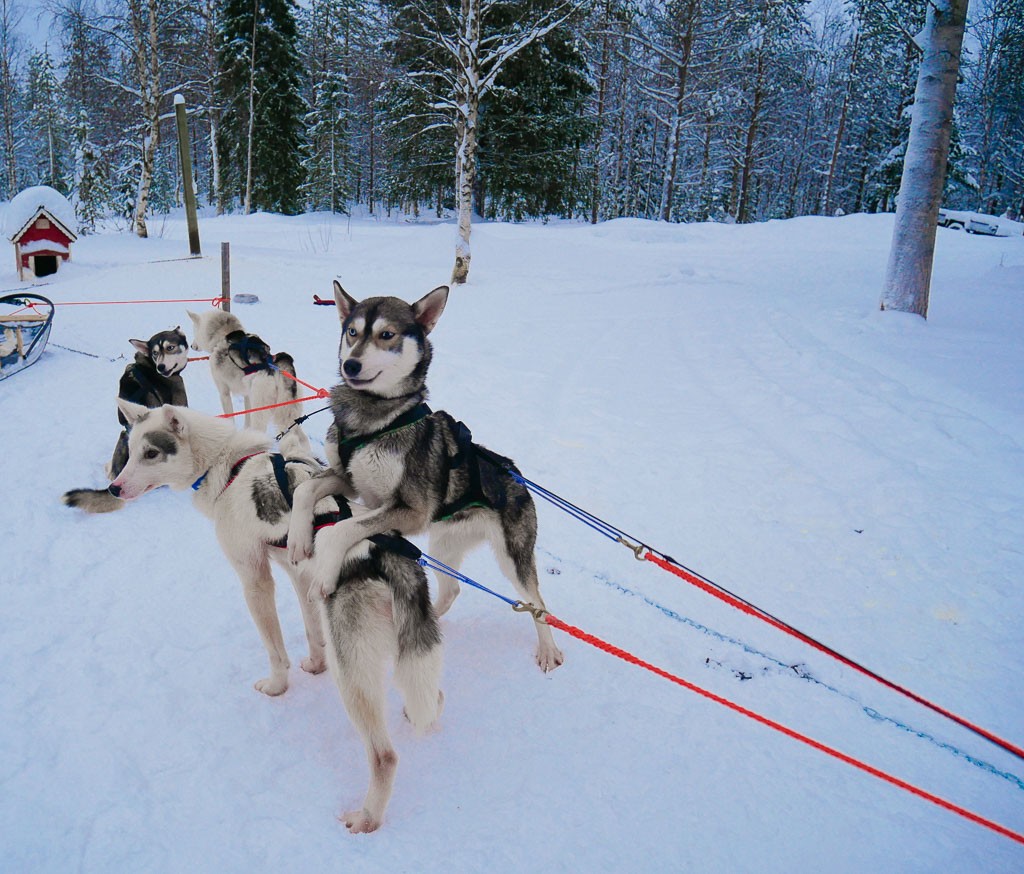 So, you actually DO have to listen to the instructions before you start because if you don’t pay attention not only could you fall off and be left behind, but you could accidentally hurt the dogs.

You stand while you dog sled, which I didn’t realize ahead of time. You stand on the two sides of the sled and in the middle is a brake. So, when the dogs get any slack on their leads, then you have to brake a bit so that you can pull back the slack or they could get tangled and trip. 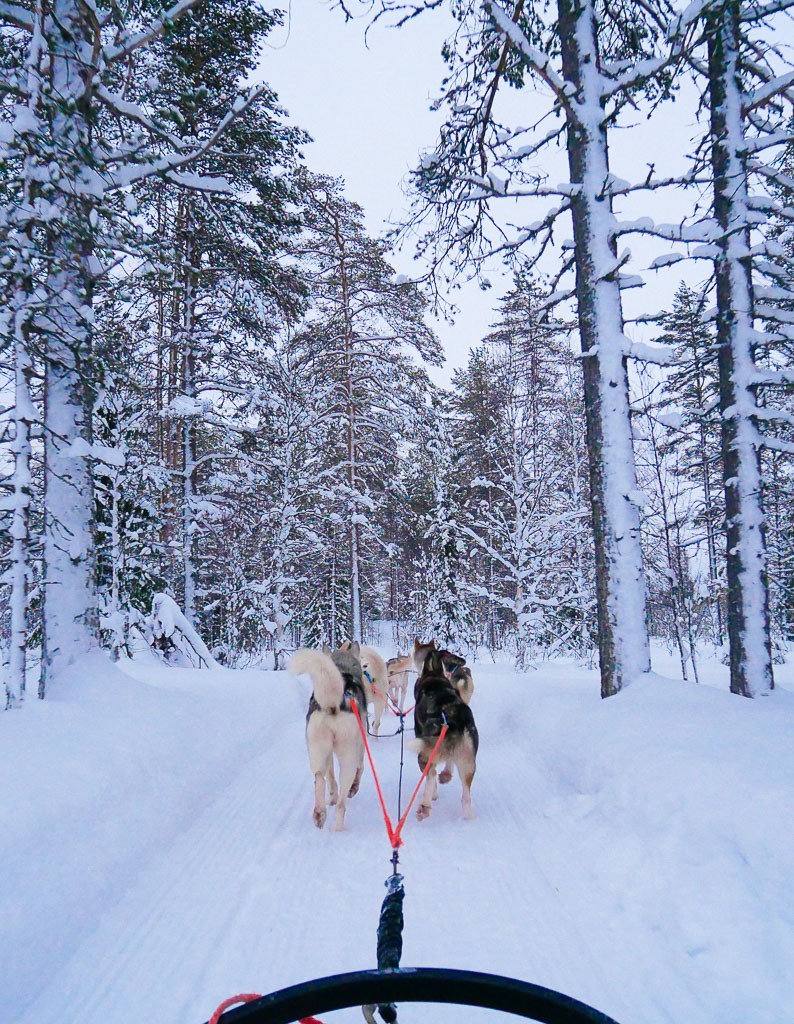 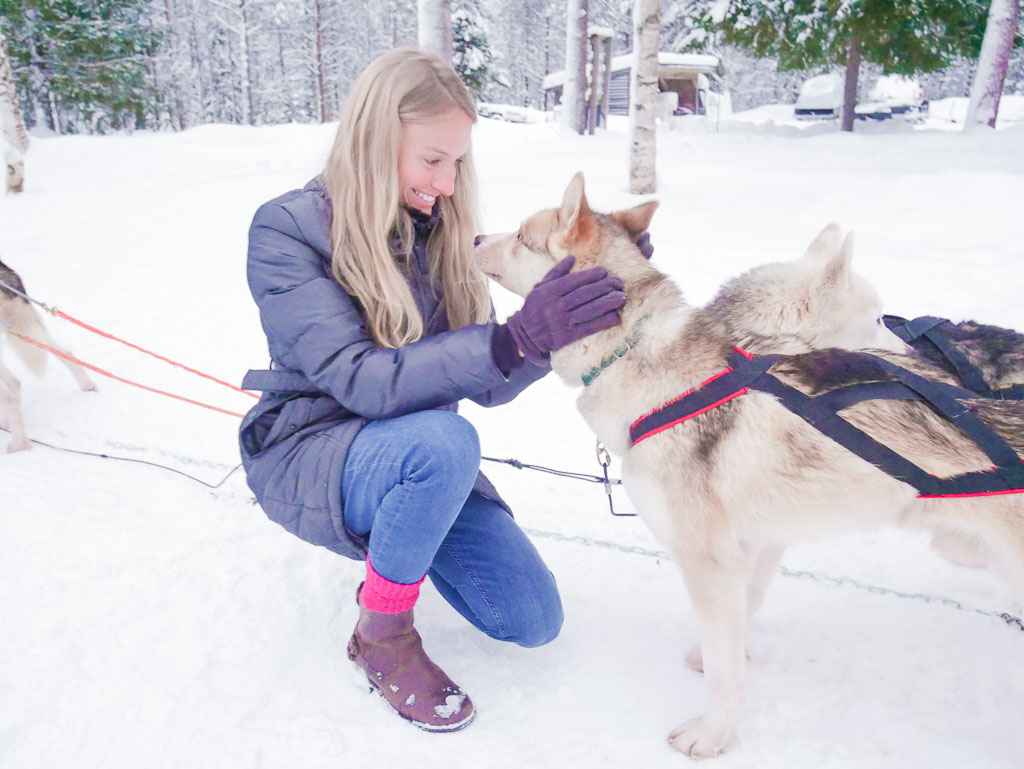 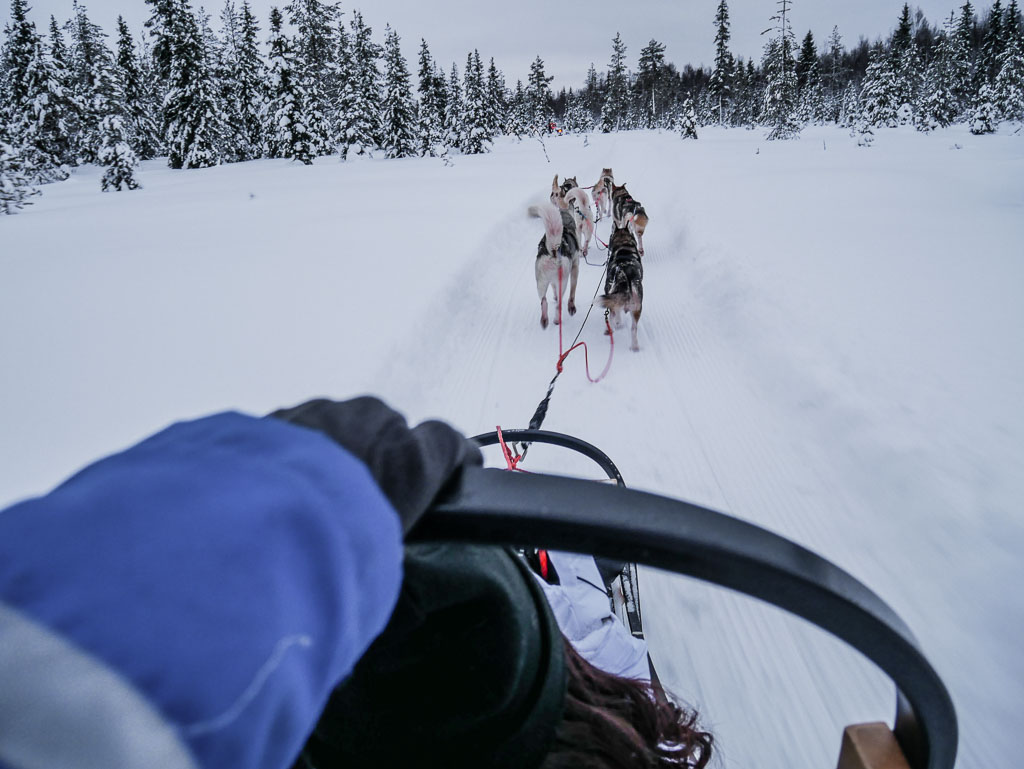 If you fall off, the dogs will just keep running; they won’t wait for you or even know/care you aren’t on the sled. But you’ll be left in the cold all alone! haha!

Before we took off, the dogs were tied to a pole so they couldn’t run off. They were yelping and crying just like my dogs do before I take them for a walk. Once that strap was released (and I was already standing), they took off like bats out of hell. You could just tell they were DYING to pull. It was fantastic! Such an incredible feeling. 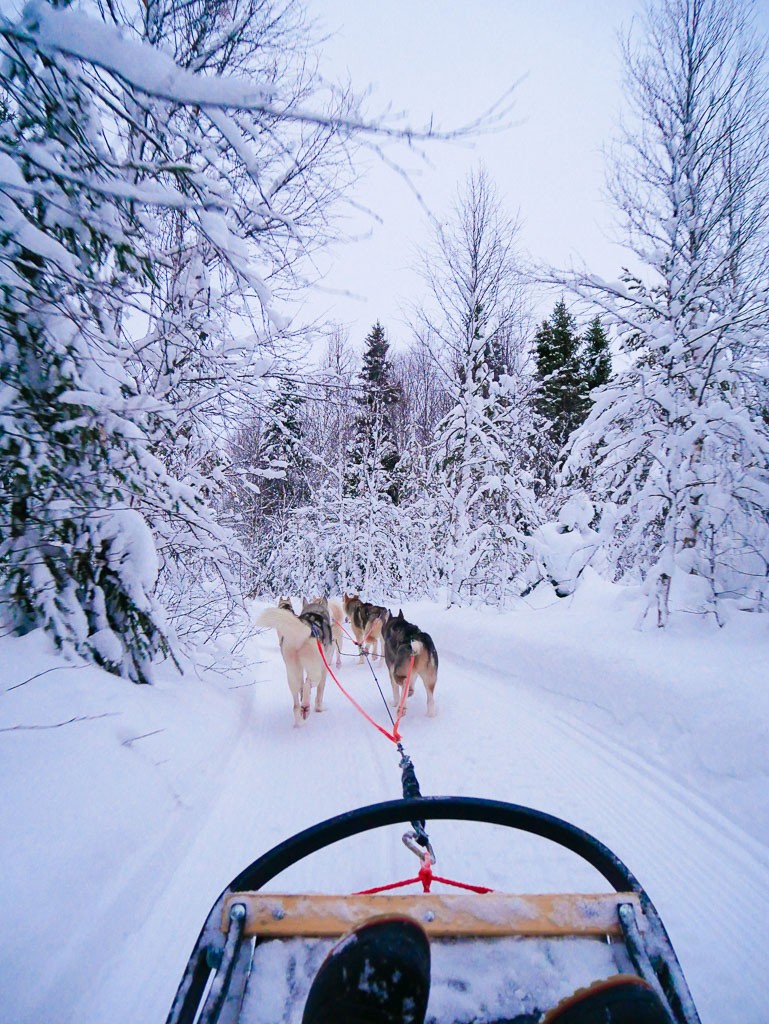 It sounded like a little bit to worry about, but once we took off the dogs just know what they are doing. At one point, one kind of started to veer left, so the other dogs did, too. Then, we fell off the side of the path into the really deep snow and got stuck. But, you can’t get off the sled because then they will leave you, so you have to kind of stand on it with one leg and try and pull the sled up from the snow with the other. It worked but was nerve-wracking! 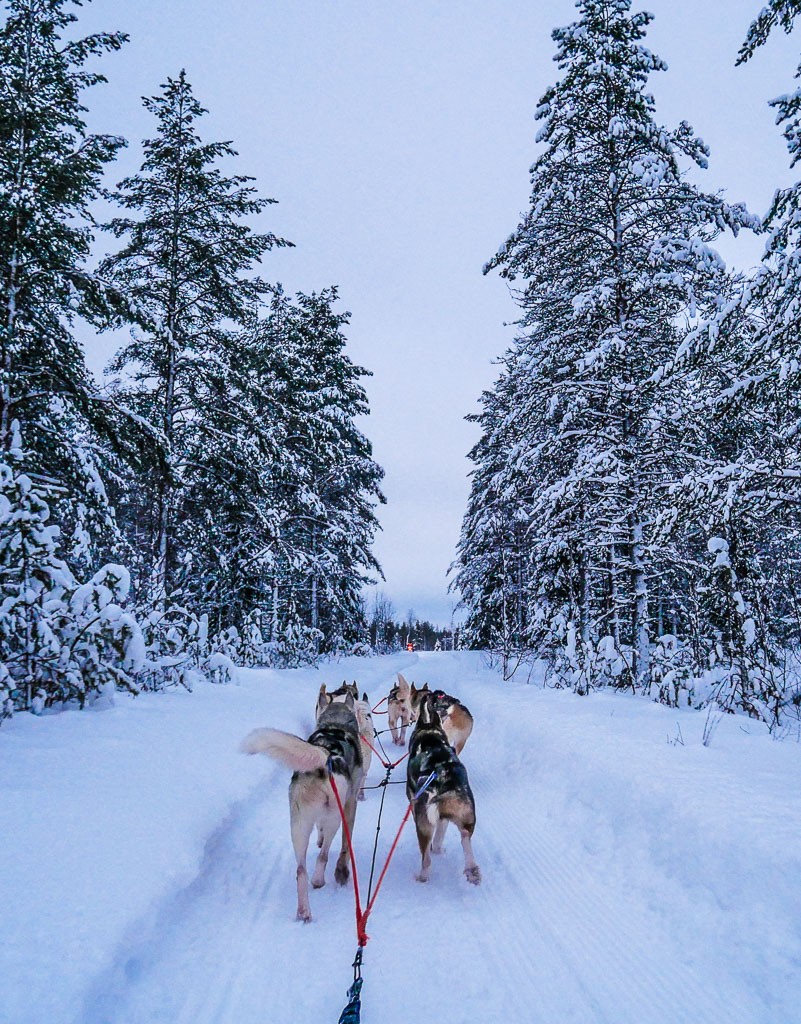 As you go through the paths, the husky mama is on her snowmobile leading the way. I am not sure the speed we were going, but it was fast. The trees were drowning in snow and it was just stunning. Really, it was the coolest thing I’ve done in so long. 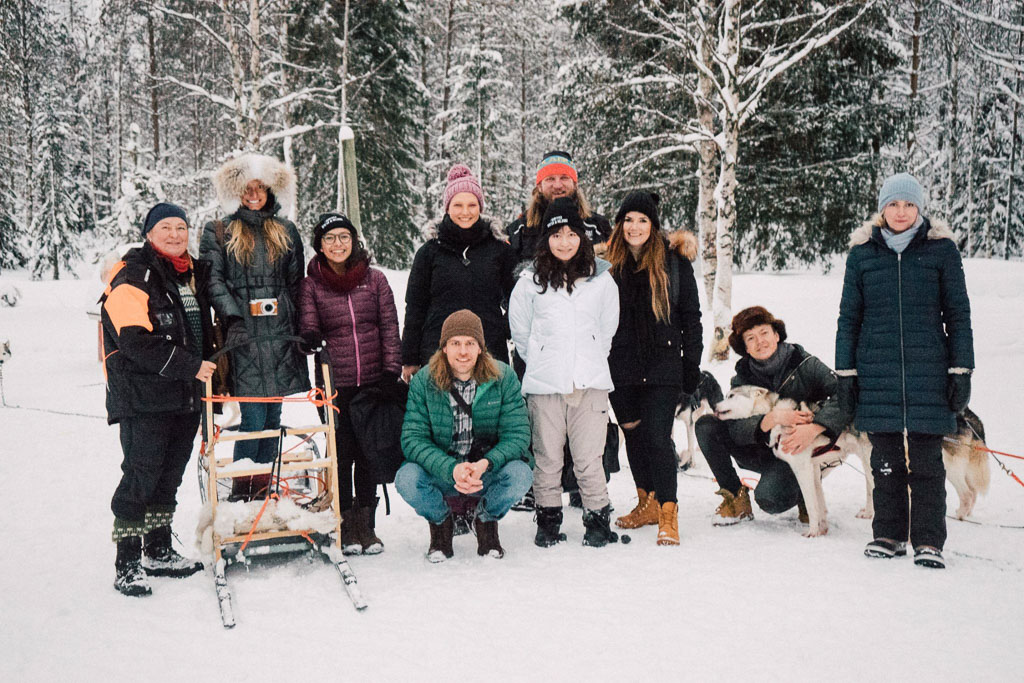 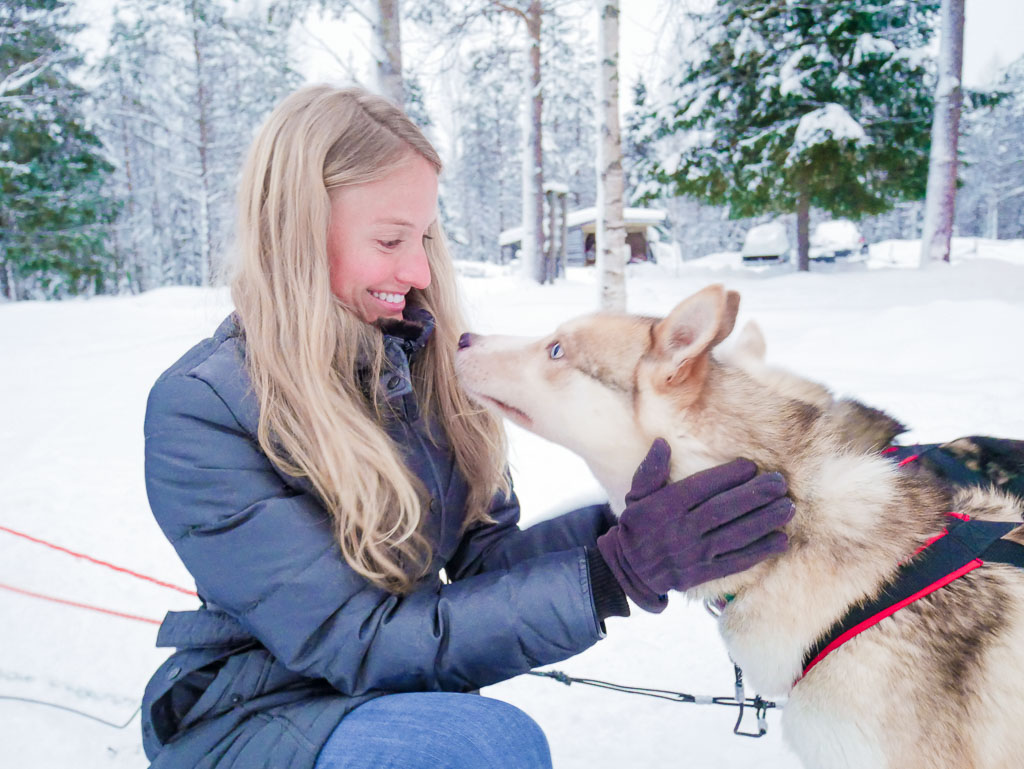 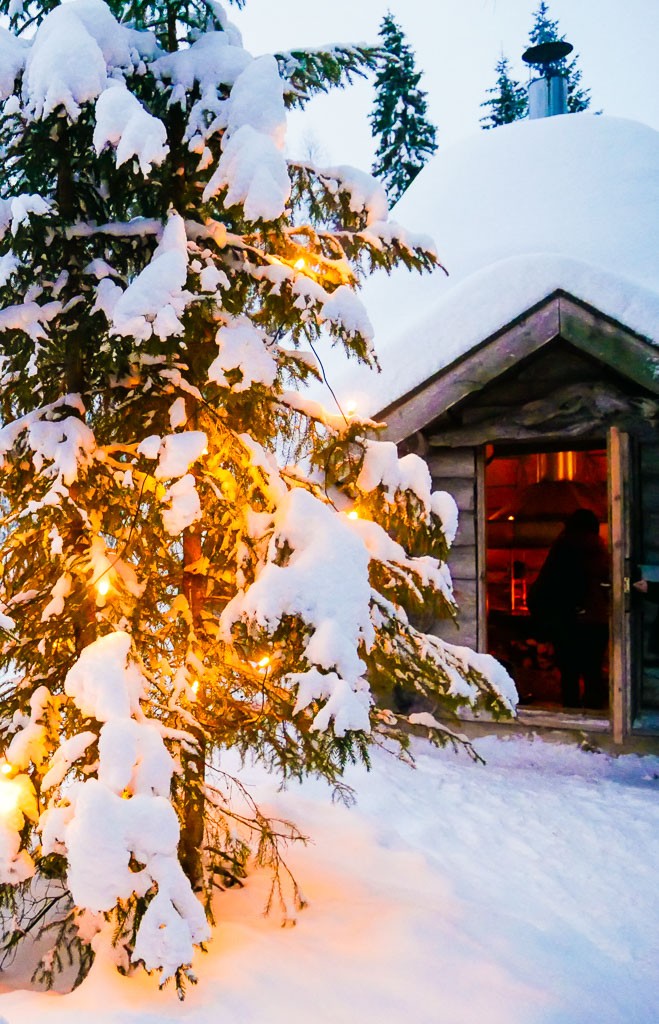 I went sledding at Syötteen Eräpalvelut and only have nice things to say. It was fantastic and the people working there were so clearly loving their dogs. They have over 100 Siberian huskies here.

You can go early and help get the dogs set up in their harnesses. There is only 3-4 hours of sunlight in the winter, so you’ll want to plan accordingly.

There were puppies when we were there but they were too small to see guests. But, if you’re lucky you can play with husky pups!

We stayed in Oulu at Lapland Hotel, which was wonderful and right near the center of town – you can walk anywhere.

Read about more adventures you can have in Finland. 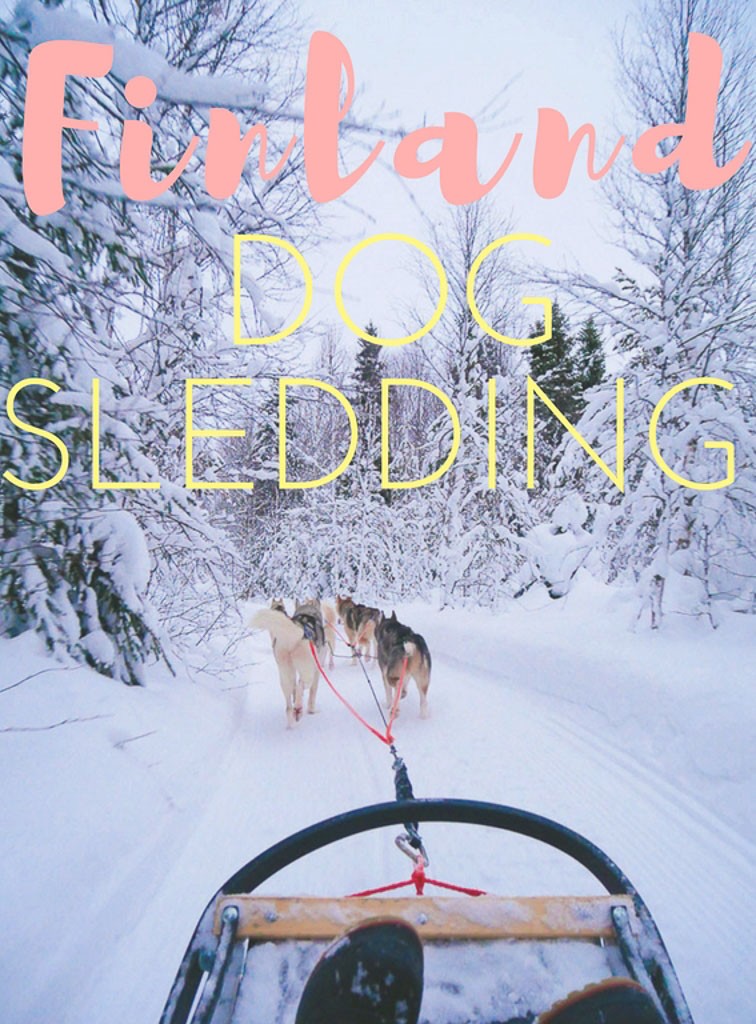