I WARN YOU THERE IS A GRUESOME PHOTO IN THIS BLOG POST!

(Adding some spaces so you don’t accidentally see it if you don’t want to.)

My life lately has revolved around dogs! Playing with the dogs around my house in Assagao, and helping out little ones in need here is something Ben and I are always doing and I wanted to share a recent encounter we had with a dog outside Cream Choc in Anjuna plus a few other stories about local dogs!

First I’ll start with the story of the Cream Choc dog.

We had just gotten some Gelato by Orchard Supermarket when we walked outside right in front of the shop was a dog dripping in blood from his paw, licking his leg. 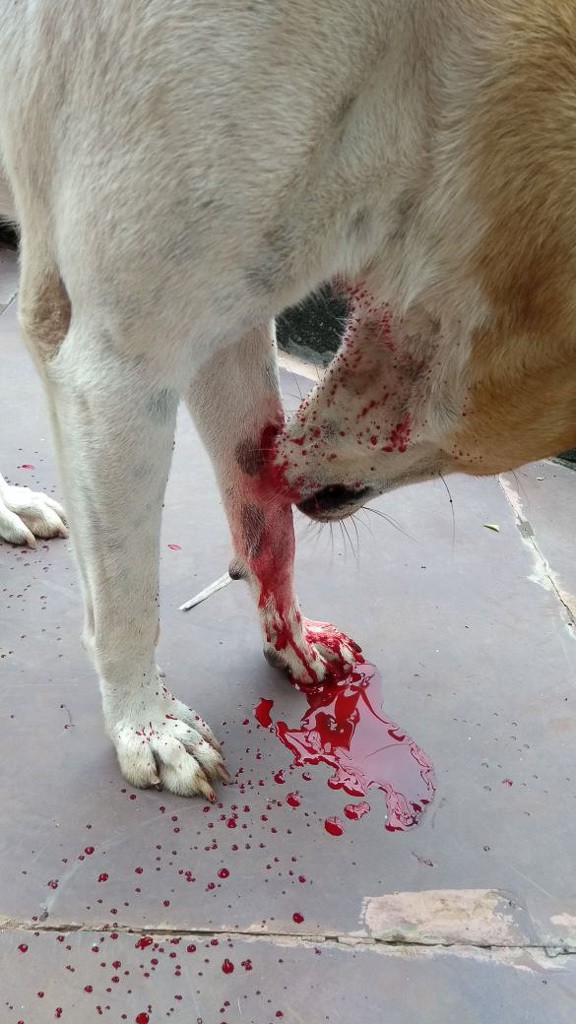 Don’t worry I didn’t see it then just take a photo, this was much later after much chasing around. He didn’t want to be helped and was recognized as a dog that often fights in this area. But, it was clear an artery was knicked and although we don’t know if it was a fight or a car (likely a car or bike though), it was bleeding really badly and just shooting out in sprays. He was licking it, but it was gushing.

It was a catch-22 because if we tried to get him, he ran which caused the bleeding to go faster. Ben ended up chasing him through the houses back behind a church, through people’s kitchens. Finally, we got him and tied a rope around him.

We called International animal rescue which is now called “Hicks” (number: 095525 57632) which is the best place to call in these situations. They said it would be 30 minutes and we all collectively thought he’d die before that. The only other option was to take him to their place which was 10 minutes away.

The guy from Cream Choc had bought some gauze and supplies and Ben tied a tourniquet which did stop the bleeding and wrapped it up.

We put him in the back of the jeep. 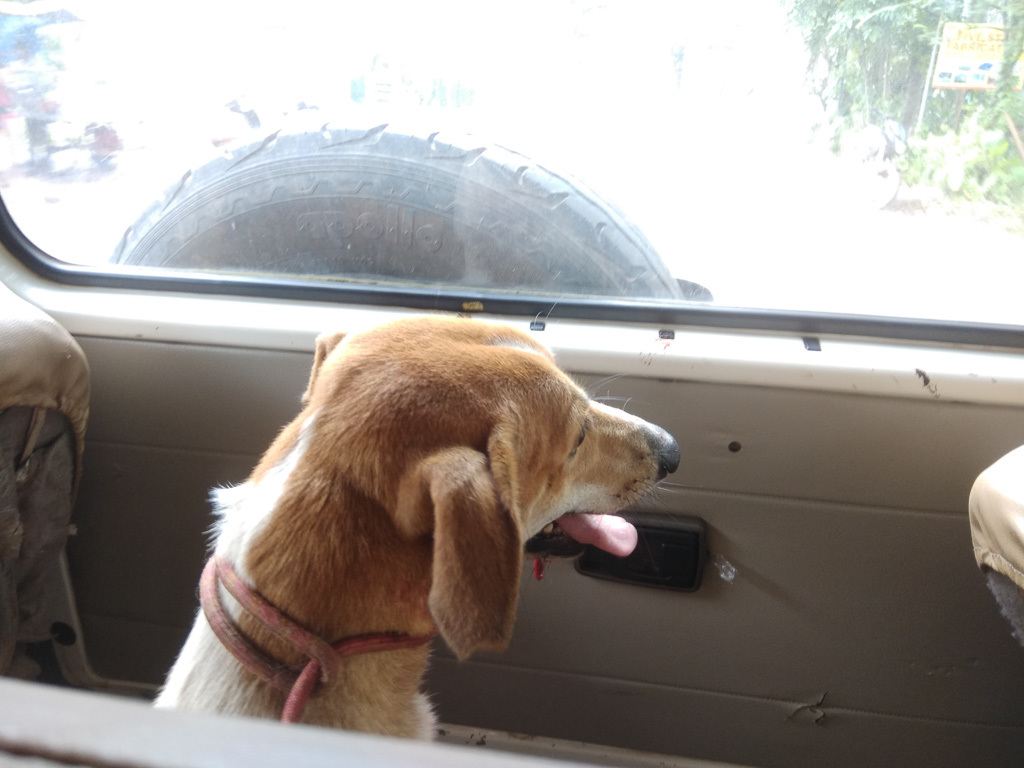 He went from nearly looking dead to suddenly very alert because he was in a car (maybe for the first time). Poor guy had blood dripping from his mouth and was looking out the window at the cows and cars passing by.

We got him to the rescue center and they initially said it was definitely be amputated but later decided that would be only if they could not stop the bleeding. They took him in for surgery and did stop the bleeding, but found his leg was broken in a few places. They casted it and luckily for this guy he got to live and keep his leg. 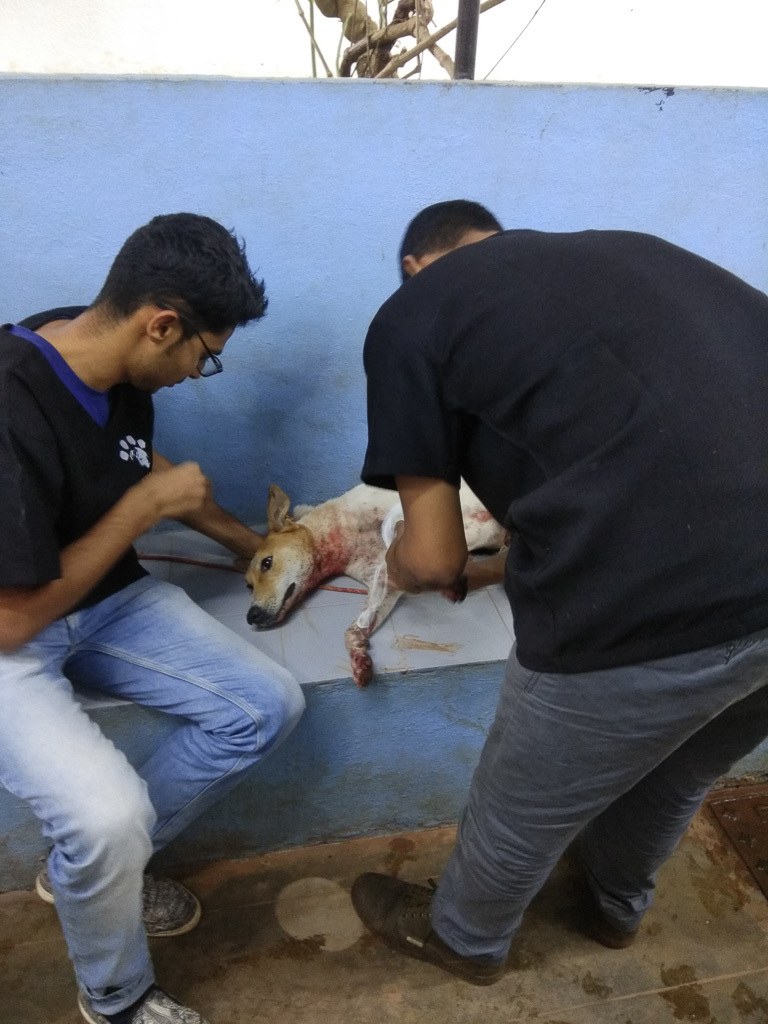 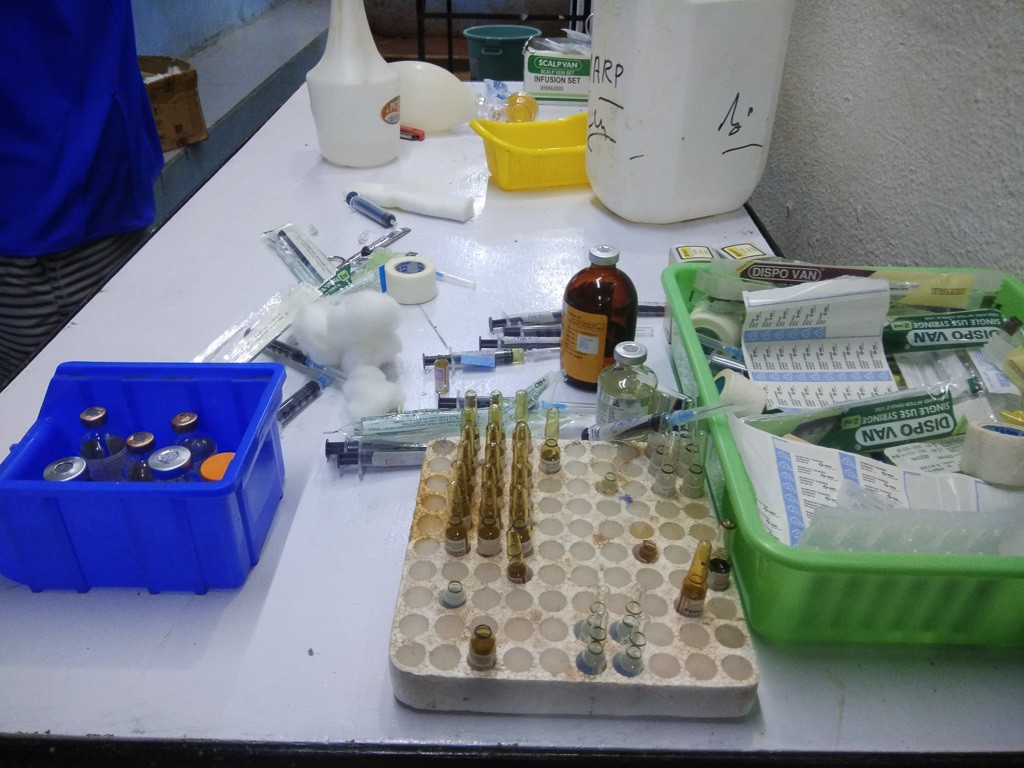 Because he could not go back on the street injured, and could not stay at our house with our dogs who would want to fight him, he has to stay at the rescue center for at least a month to be taken care of.

Once he’s better, he will be dropped back off at Cream Choc and be back to doing what those dogs do: chase scooters and fight. Give him a pet if you see him!

We go check on him occasionally and take him treats and extra food. He looks okay but is really swollen.

The other dogs there are so sad to see, and it’s all just heartbreaking. Here’s how you can volunteer with animals in Goa. 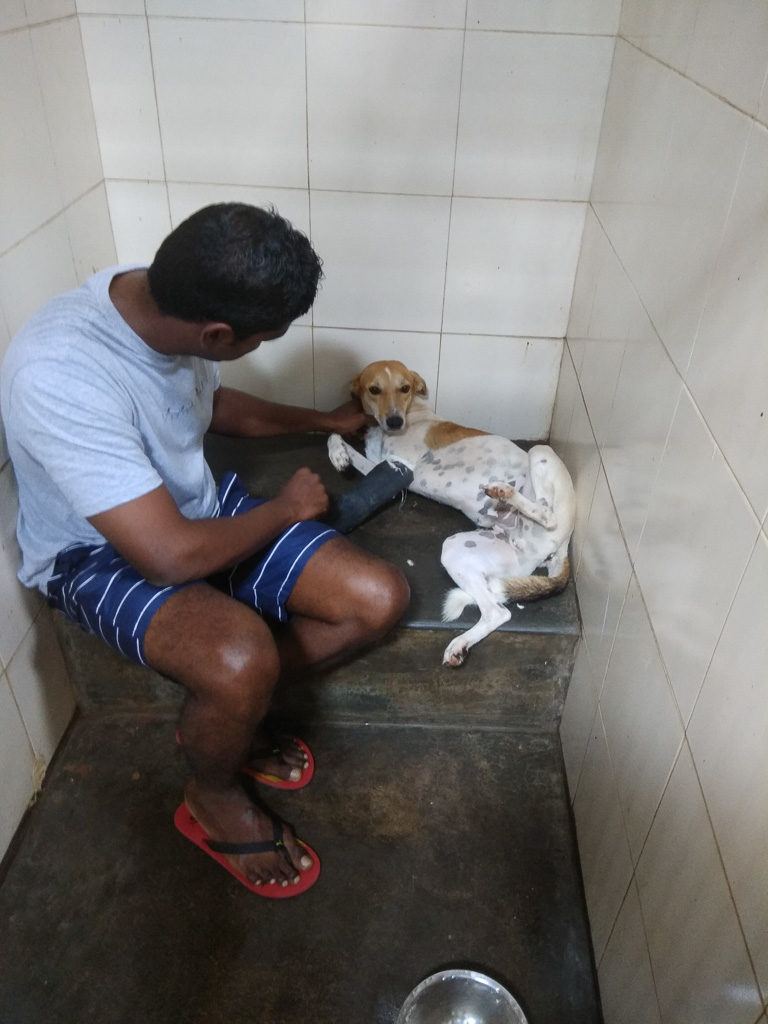 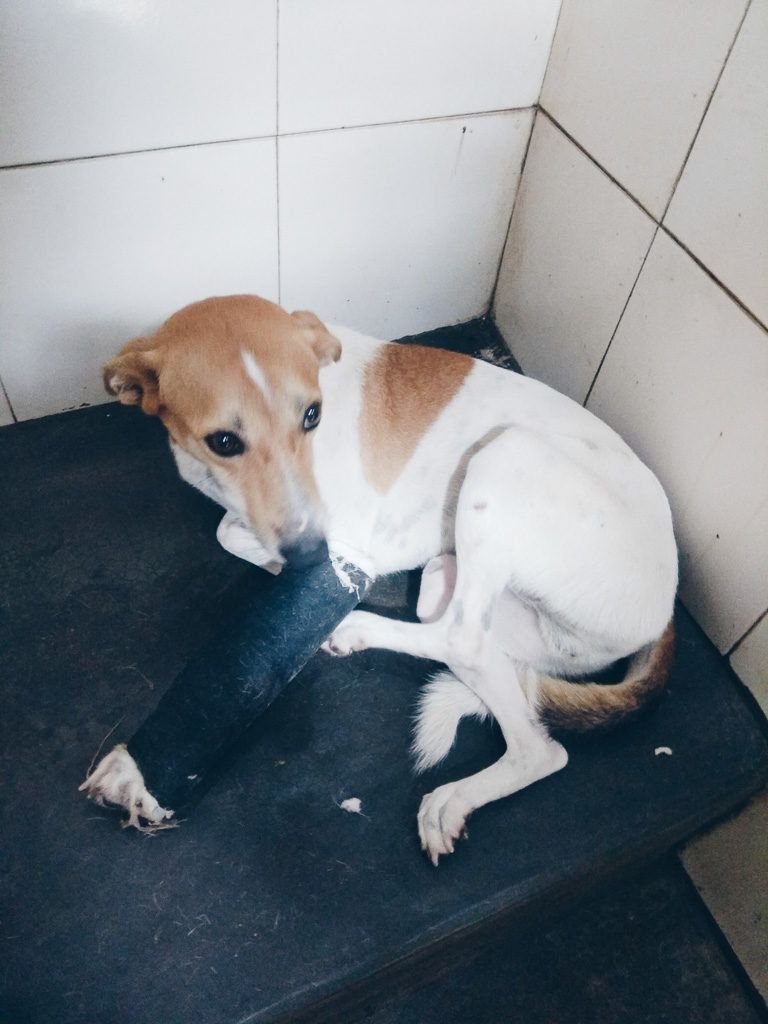 There are so many dogs around that need help in Goa, but it’s really impossible to help them all. Ben and I usually focus on helping just the dogs around our house. There is this little girl, who is the cutest and helps take care of the puppies here. 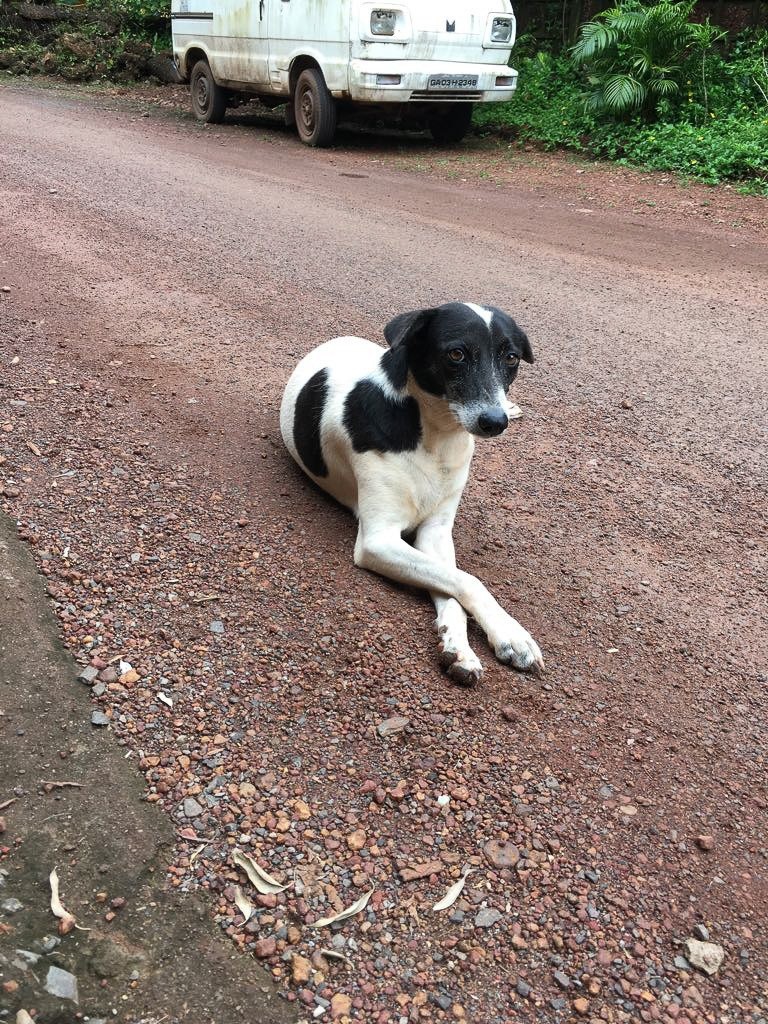 There was one VERY cute little puppy a couple months ago that we were feeding but that one was sadly hit by a car and killed.

There is a new puppy though, the shoe-stealer who become the black and white dog above’s little buddy – but was terrified of people and wouldn’t even let us come near enough to leave food. Omni, one of our dogs loved this puppy though.

The puppy would go behind the wall behind our house and Omni was on our side of the wall and they would literally cry for each other. Omni would jump the wall and lay with the puppy (and our stolen flip flops). We tried to catch him little dude for a couple weeks, but he was always too deep in the jungle which is thick this time of year. 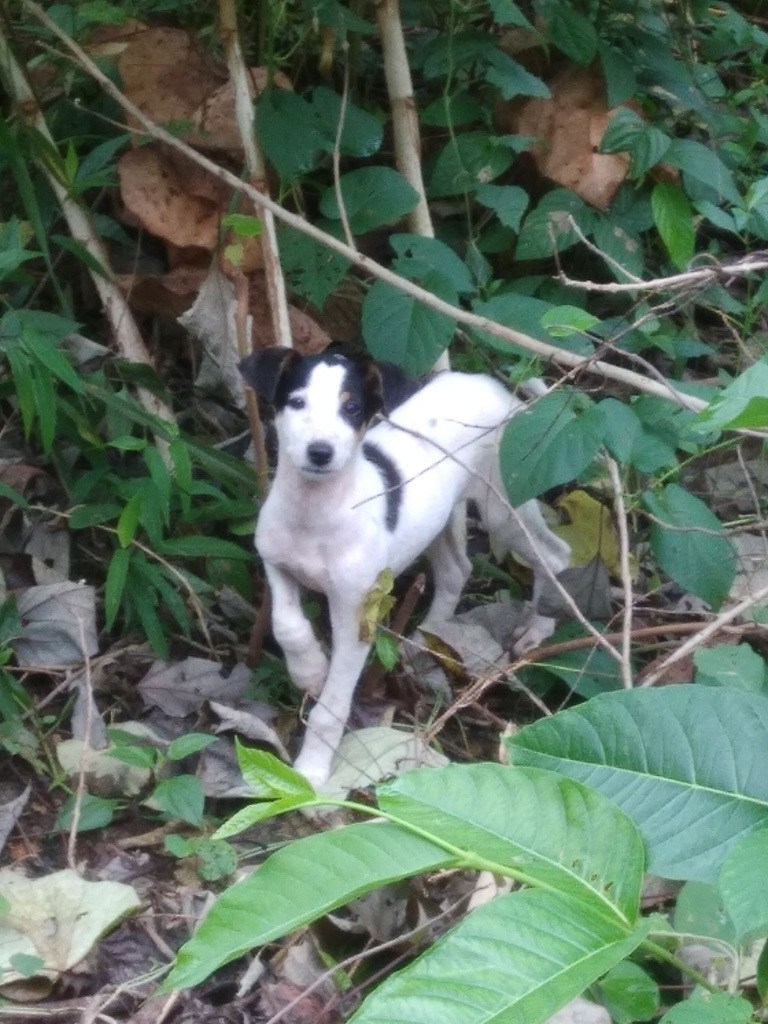 After some time, he was finally caught and got some shots at animals rescue. How cute is this guy!? We call him Yoda because of the giant ears. 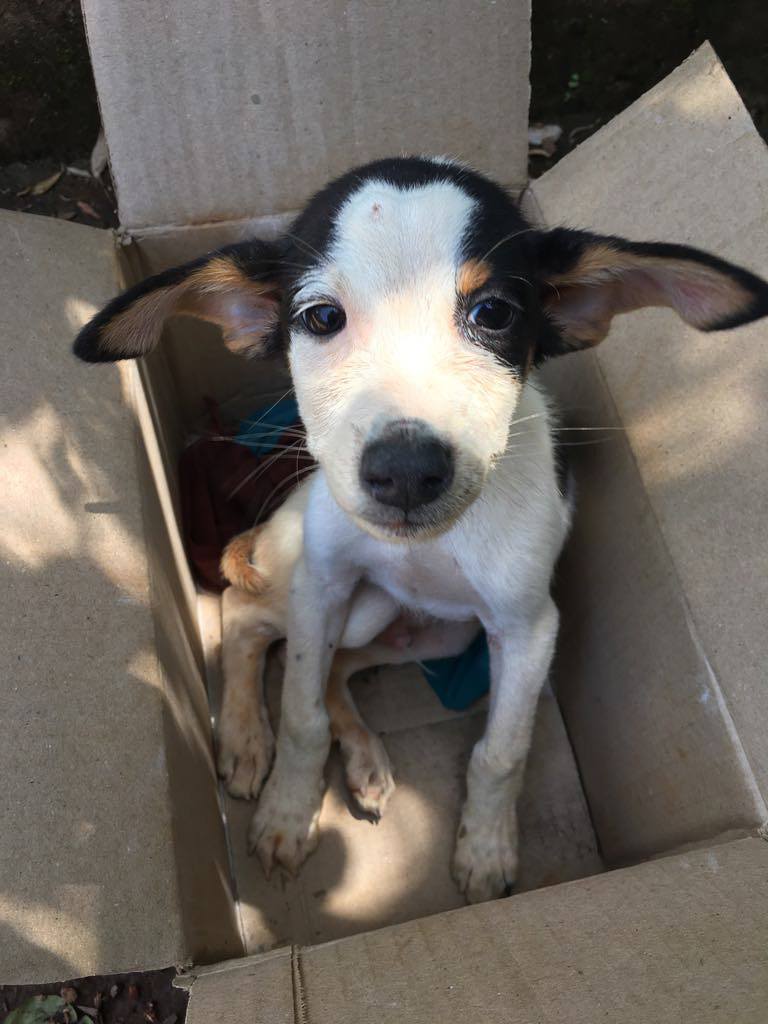 One guy who lives in our complex offered to keep this puppy if we could catch it, but he lives in Mumbai mostly, so we caught him a week ago and have been taking care of him. He isn’t afraid of people at all anymore. 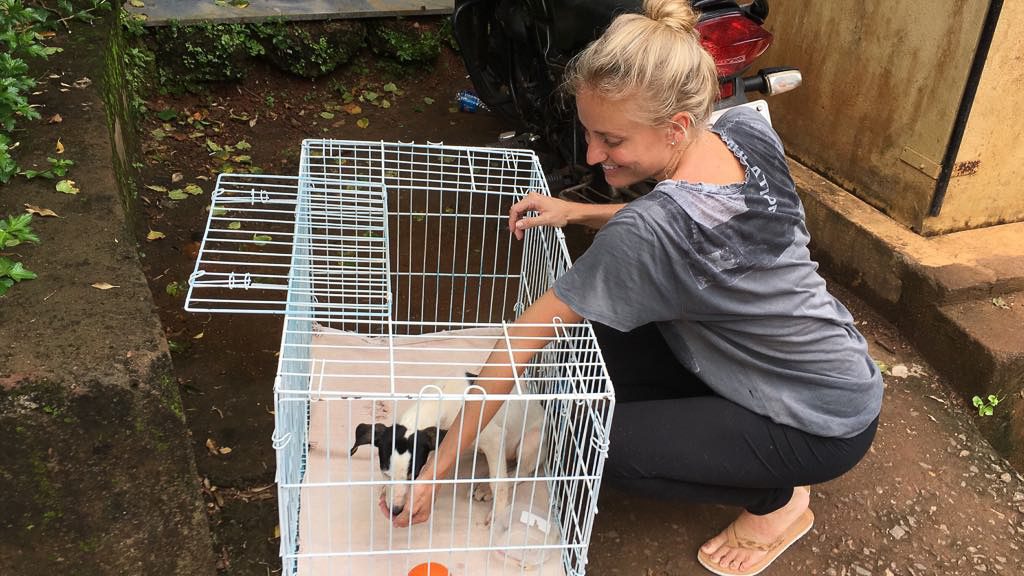 Running in the jungle with my friend Ryance catching this puppy was scary because we have seen pythons and cobras outside our house! My heart was pouding. Ryance was scared too but moreso of the German Sherperd barking at us from the other side of a wall. 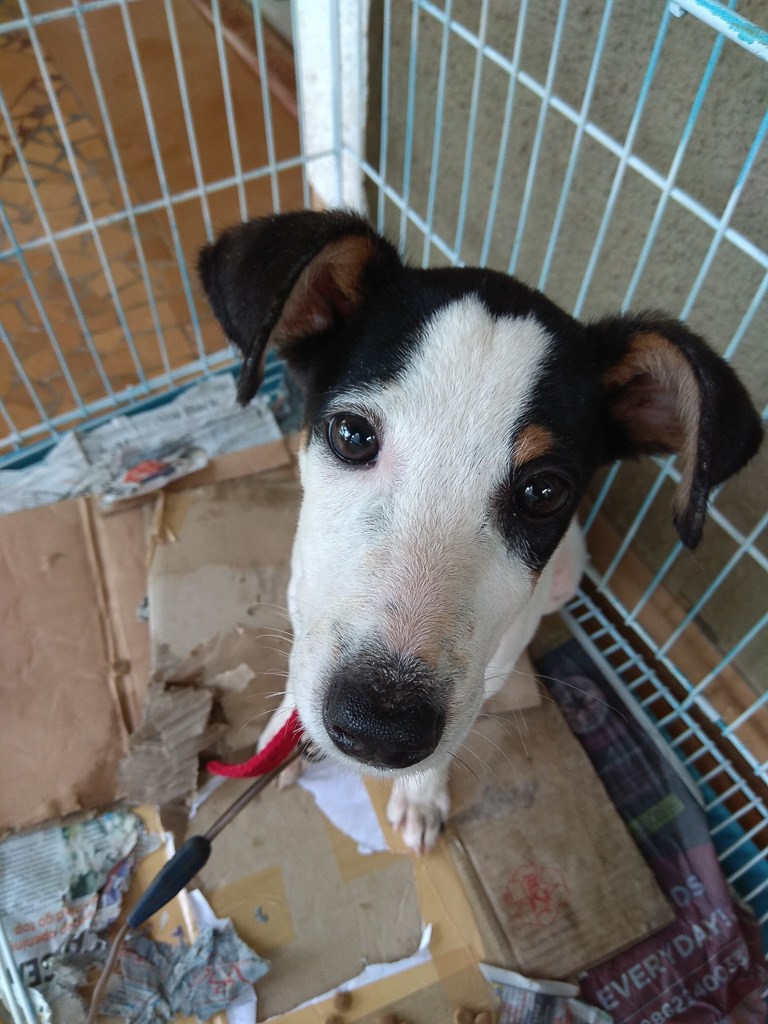 Shanti is not happy that this little puppy has stolen her cage, though!

At our house, we still have Shanti the Keralan, Omni the local dog who used to chill outside our house, and Kitkit, who we got in Olaulim. 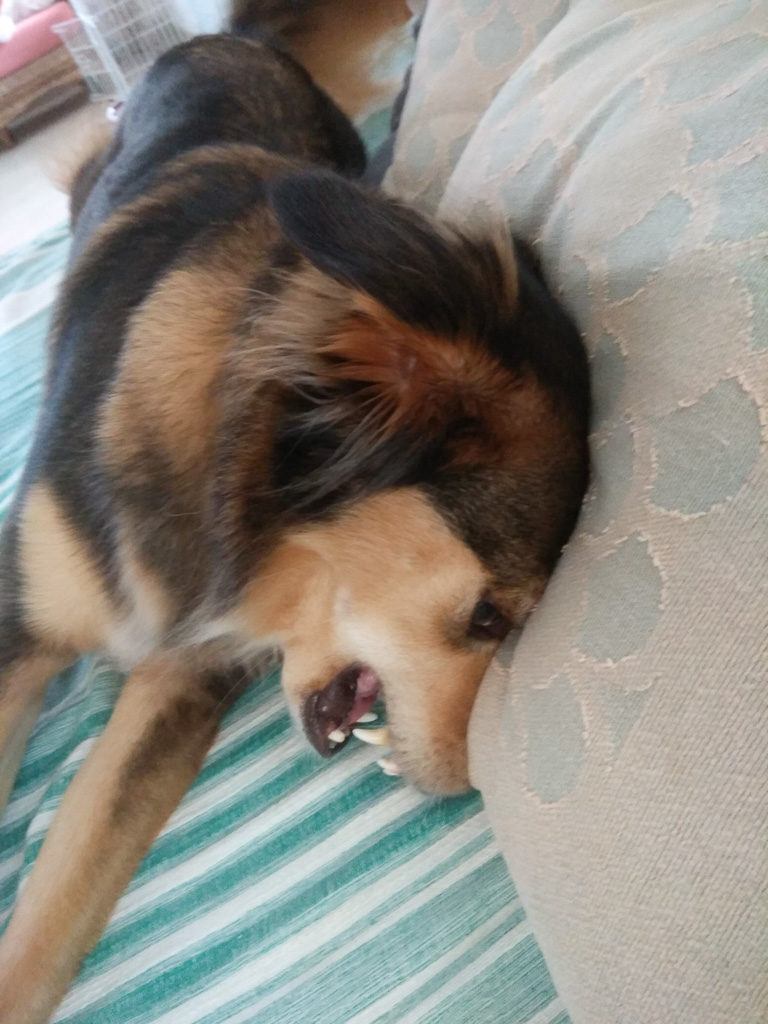 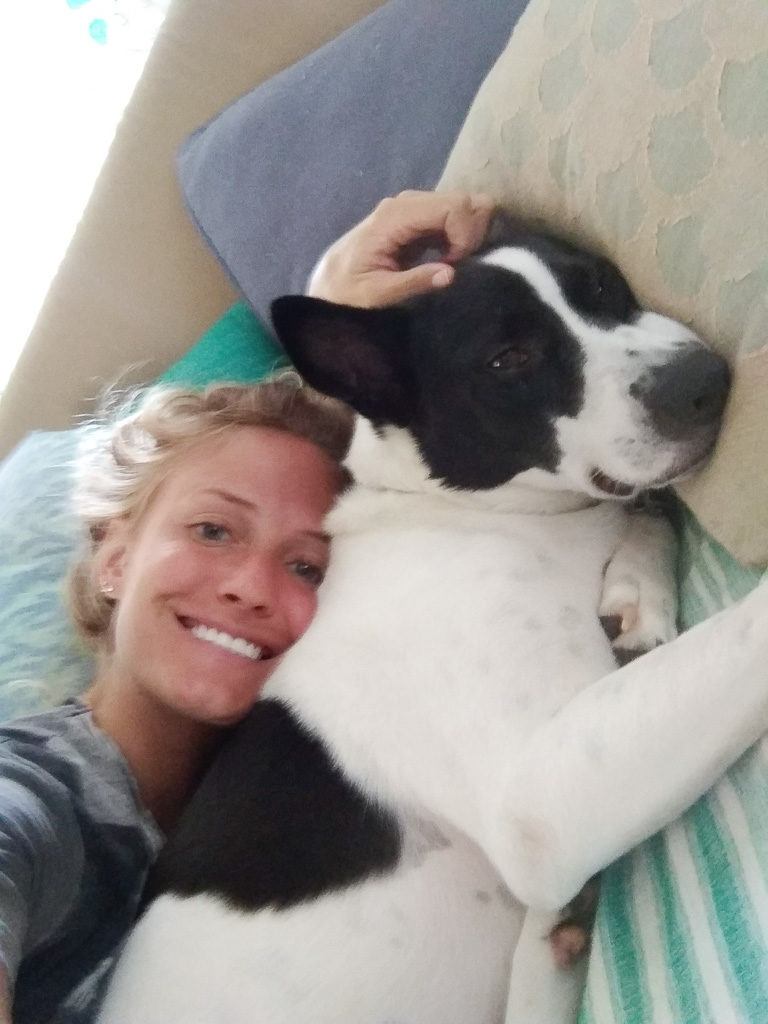 To top it off, there are always monkeys outside the house making all the dogs go crazy. The house next to ours has a German Shepherd and it actually killed a monkey! They can get crazy, especially when they come onto the balcony.

This is outside my window. 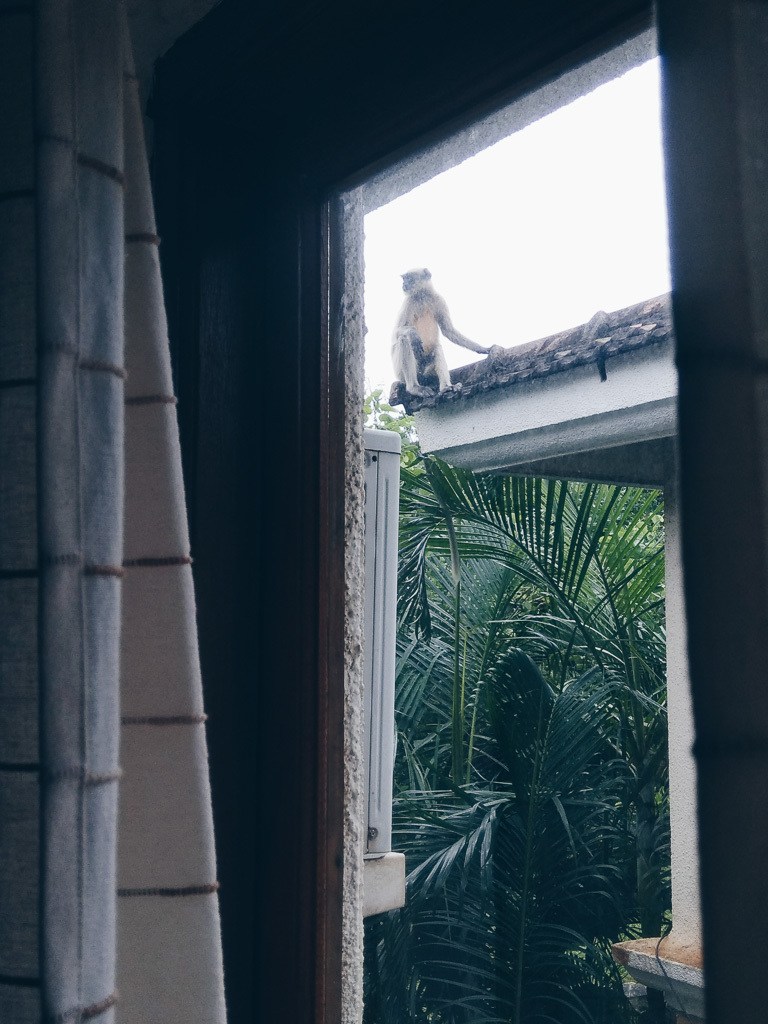 Omni likes to stare out at them. If you look in the top left, you’ll see a big monkey on the wall. 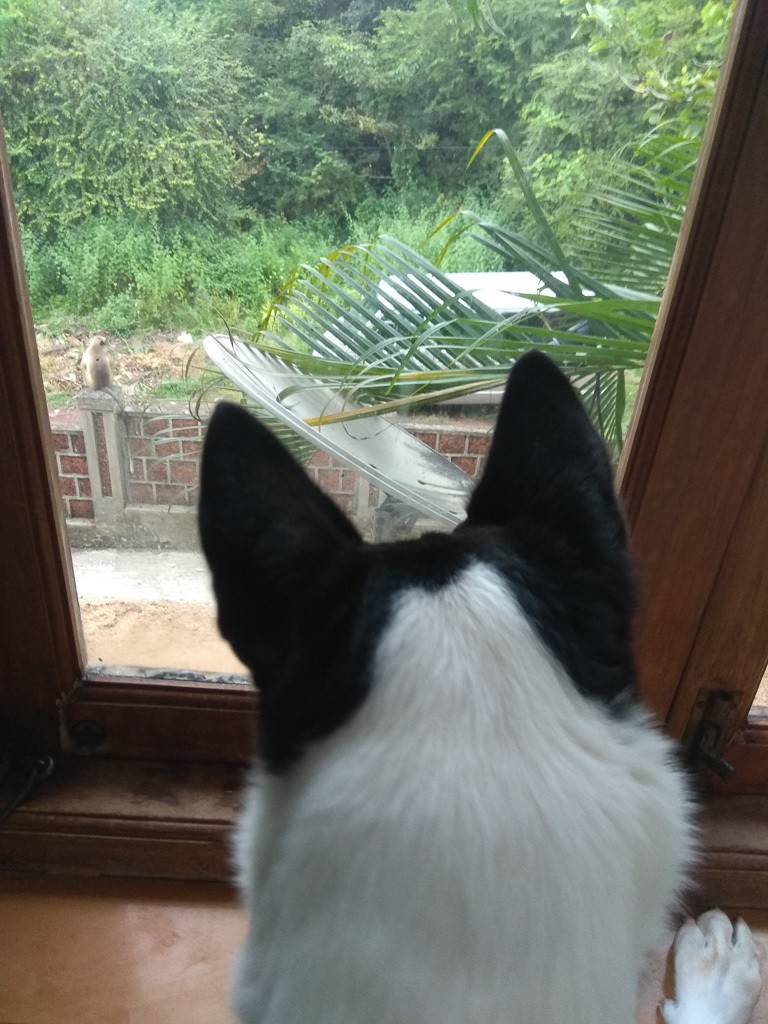 Then, last night to top it off, the dogs were going crazy and woke me up, I looked outside and there were a bunch of dudes outside the house. I came out and asked security what was going on and someone had hit a cow with their car and drove off. So, our neighbors were searching the jungle for the cow, who’s leg was smashed.

Not the cow pictured, but they are all in the streets like this so you should drive safely here. 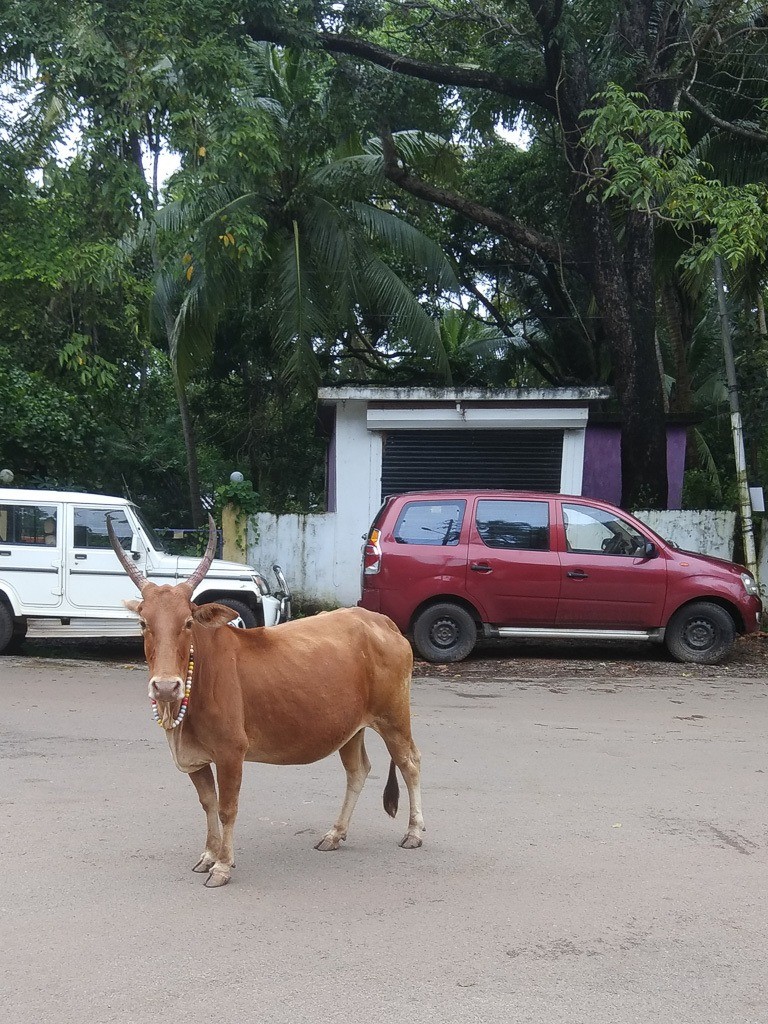