From a G6 to an Omni | Driving in India

I LOVE to drive (I even like driving in India).  A month after getting my license, at 16, I flipped a Tahoe a few times. I wasn’t going to let that little snafu discourage me. After a truck, and some Dodge thing, my little Pontiac G6 arrived. Her and I have logged many hours on the road, just the two of us.

We’ve taken many trips from Ohio to Charlotte, my first apartment on my own. Drove to Chicago and DC in the same week, made it to SC and Florida. We’ve done the old route 66 road trip for a week, and came back across the northern states from Seattle back to Ohio.

I’ve driven through the Smokey’s and the Rockies in some pretty treacherous weather (“why does everyone else have chains on their tires…?”) I have all my phone chargers, iPod docks, extra loud speakers, and the sunroof open as I wander around and collect speeding tickets and occasionally back into poles/fences. 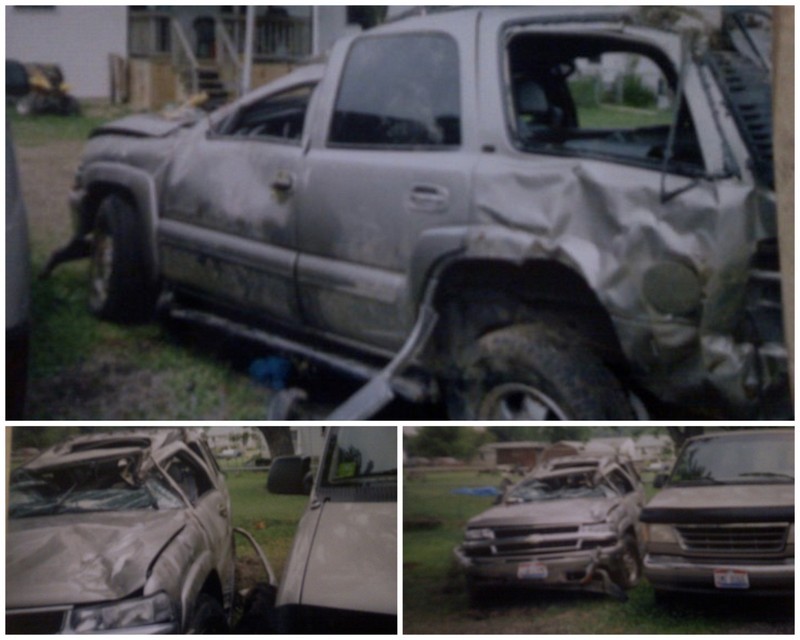 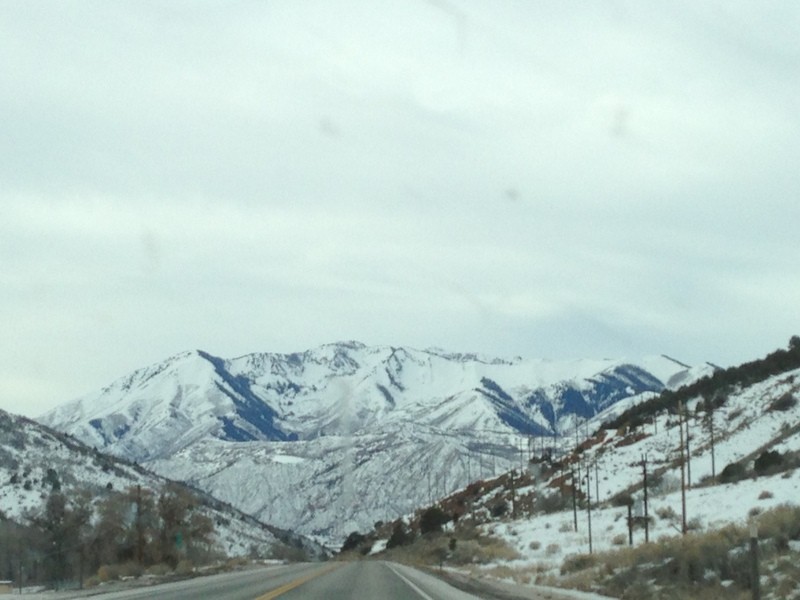 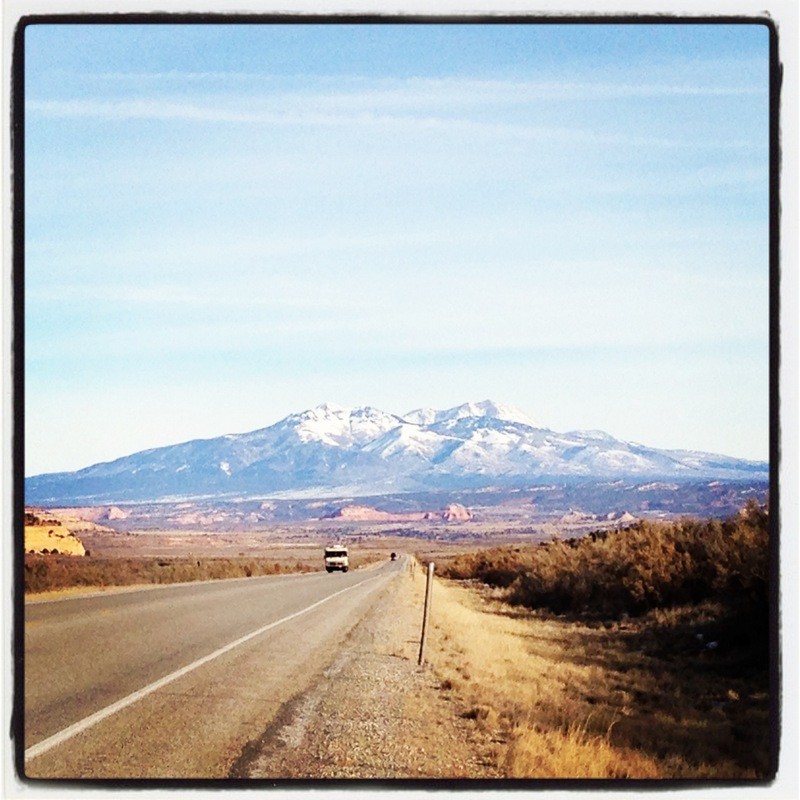 My New ride in India… 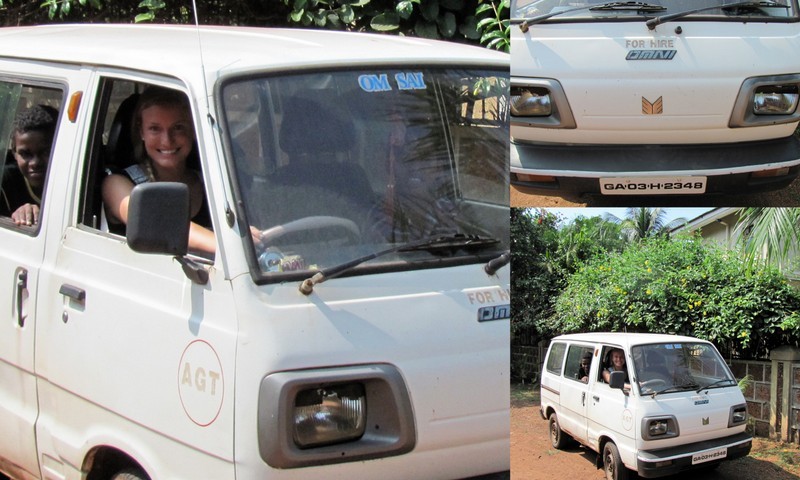 Now my car sits lonely in my parent’s driveway and I’ve been given an Omni to drive by my boyfriend. I had gone from a G6 to an Omni. Something is always broken on it: brakes completely out, horn out, battery needs adjusted before each start, missing handles, doors that won’t open… An Omni is a typical Indian taxi van… although; I’ve also seen it as a Hurst. You can still see the “For Hire” signs on ours if you squint through the mildew covering the paintjob. People flag me down for a ride and as I get closer I see the usual “what the f*$% is that blonde chick driving an Omni around my village for?” look. It’s illegal on so many levels (shh), not to mention I don’t know how to drive here. 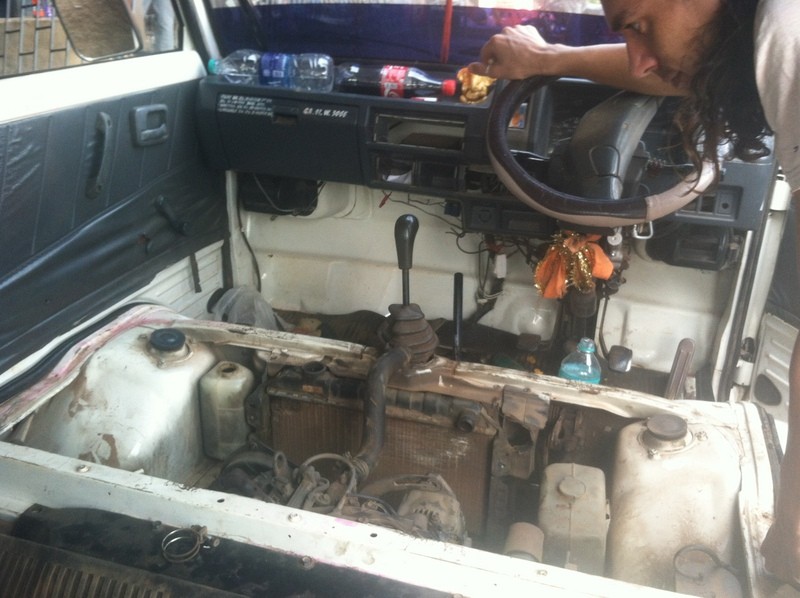 the engine is right under my butt! the seats don’t latch properly, so it’s always too hot

No power steering, drivers seat is on the right, driving on the left side of the road, an E-brake I actually have to use, a third pedal, and a gearshift I have to use every two seconds. So I’m starting to get good at it… with no traffic and no people. But at that really serious moment when I have to turn into the hair salon in front of a semi-truck, I WILL STALL. It’s a given. I must cause more traffic jams than anyone in Goa. It’s really not something I want to be known for. I’ve come to accept that at the most dangerous moment, I will stall. Then there’s the times when I come back to find my car squeezed between two others and have to ask someone to back my car out for me. Soon I’ll be known as such a bad driver, cars will know not to park next to me. 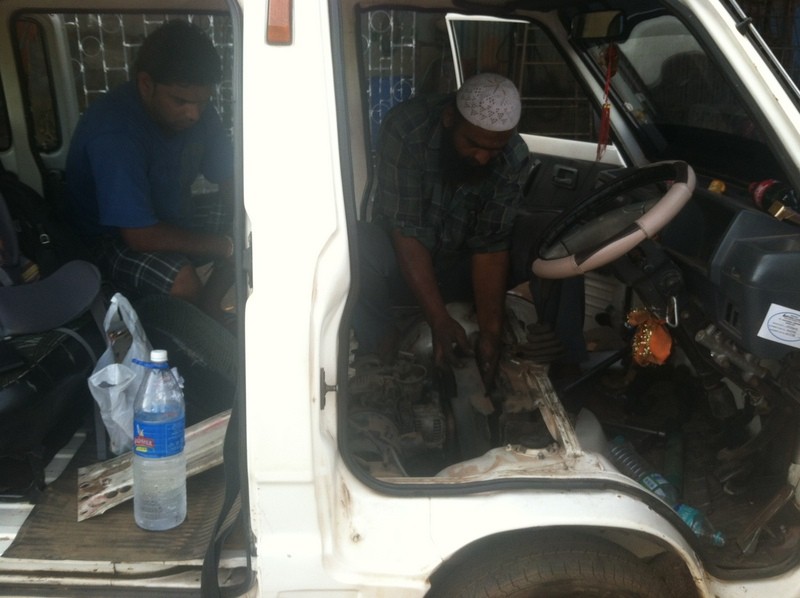 after breaking down we called Sai to come save the day.. which was done for less than 10 dollars

The cars here are pimped out. Tinted windows (illegal, but nothing a police bribe won’t fix), lights on the roof, home air conditioners on the roof, Hindu gods scattered on the dash, fur décor conveniently covering the price sheets, and extra speakers in the trunk. It doesn’t make the Indian traffic less INSANE or bearable.  India has over 1.2 BILLION people all sharing the roads. They love their horns, as anyone who has been here knows. 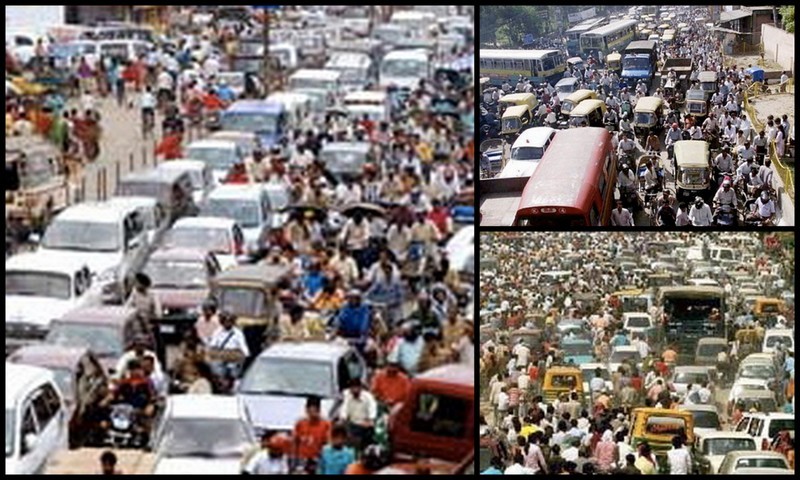 The backs of trucks all say “HONK OK PLEASE” so that they know you’re passing. I have lost my cool in 105-degree heat and screamed at traffic from Bombay rickshaws during rush hour. That was only after many days of Bombay stealing my soul. There is absolutely no chance that honking will make this traffic jam go away. I always said that I would never be a “honker” here. 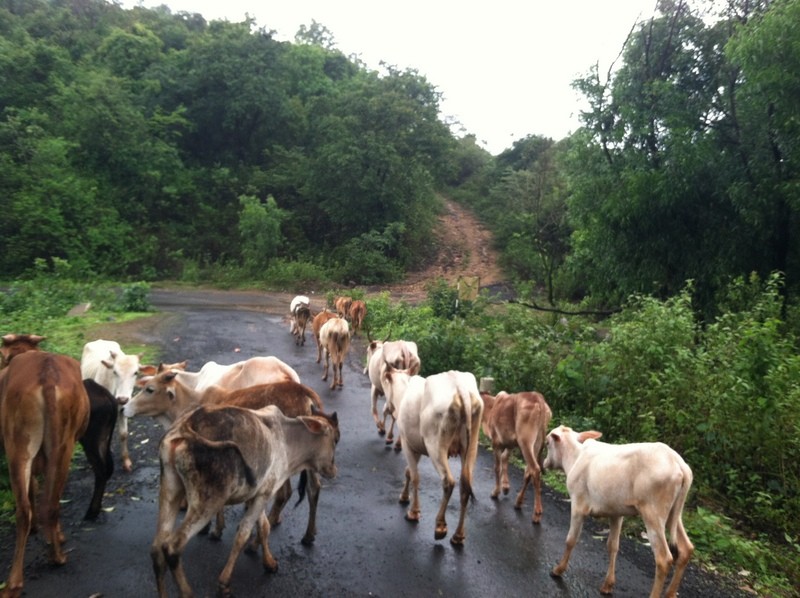 There are no traffic laws (that are followed) and round-abouts are everywhere (THOSE are stressful!)  You have to dodge kids on motorbikes, stray dogs, and drunk drivers that have been partying at Curlie’s all day. When you break down and are pushing the car across Panjim bridge expect honks, not help. You have to speak cow language to the herds in the road to get through (sounds like saying all the vowels in a deep grunt aaa eeee iiii oooo uuuu… really easy to learn). My boyfriend, Tarzan, is a pro. Occasionally, a speed bump isn’t a bump it’s a python. No big deal right? 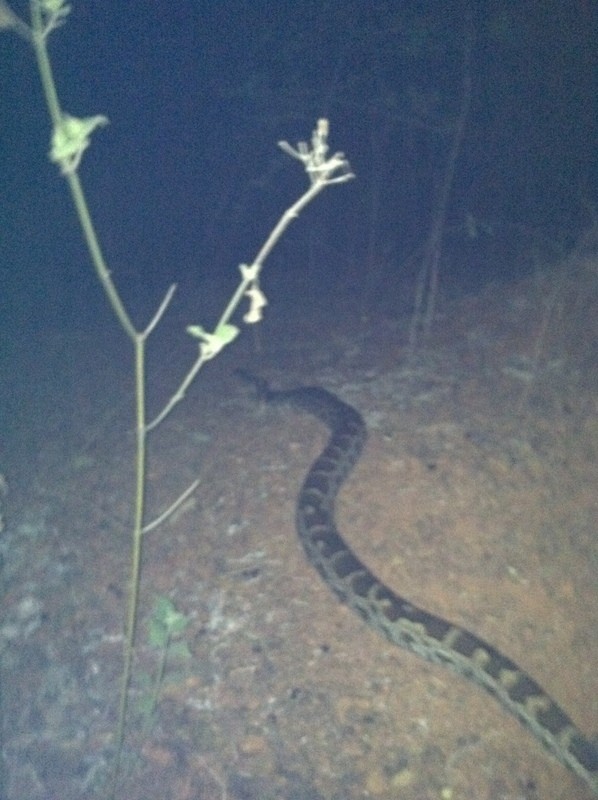 SERIOUSLY he was stretched out across the road, but the boys chased him back in to the jungle

I am still working up the courage to get a scooter, but I tried that in Hampi and before I left the parking lot, I drove straight into a wall. Plus, everyone I know has had intense wrecks on them. I also realized that because of the no followed traffic laws, if I don’t honk before an intersection, I will collide with someone.

So, sometimes I honk my way around Goa, drive like a grandma, and piss off everyone in my path, and other times my awesome driver, Babu, takes me so I can save myself from multiple near heart attacks and homicides. I wish I could drive around when I get back to Ohio, but in the real world you need an active license and insurance for that, two things which I lack in all countries. 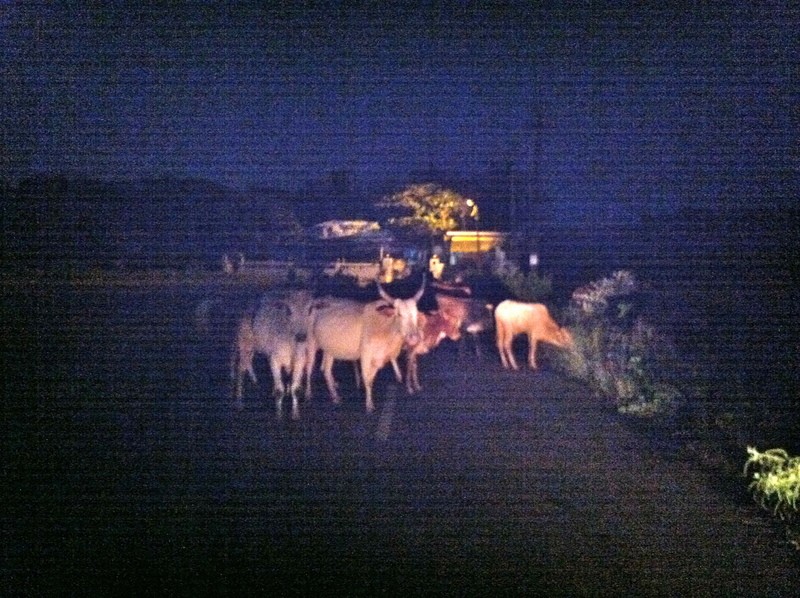 I still dive the omni, so much so that Ben has rented a scooter. I’m actually not bad & my Delhi friends get a kick out of pretending I’m a taxi driver. My parents and US friends were probably a little overwhelmed with the bumpy ride and fumes. In the last two years, the omni has lost a door (replaced), got a broken gear box (fixed), popped tires, two windows don’t close, and the back boot doesn’t latch. All in all it’s a fun ride and I don’t want it to die because I’d hate to have to get a boring nano :p

Do you drive in another country? Tell me about your experiences!