This post is in a paid partnership with Rosetta Stone.

I love being an expat and being thrown into another culture, learning to live the way they do. I did this is Goa for over 5 years and it definitely taught me a lot about life! I’m now excited to do the same thing in my new home of Merida, which includes learning Spanish.

When I moved to India, I was keen to learn Hindi but quickly realized after a summer of classes it wasn’t necessary as everyone spoke English in Goa or the local language, Konkani. Moving to Merida, Mexico is completely different and I knew before moving I would have to learn Spanish – fluently.

Where I am now living is a totally Spanish-speaking, less touristy, and it’s important for me to learn the language as I don’t want to be seen as an outsider, want to show I can speak it as a sign of respect, and it just makes life easier. It was hard to communicate when I first visited. 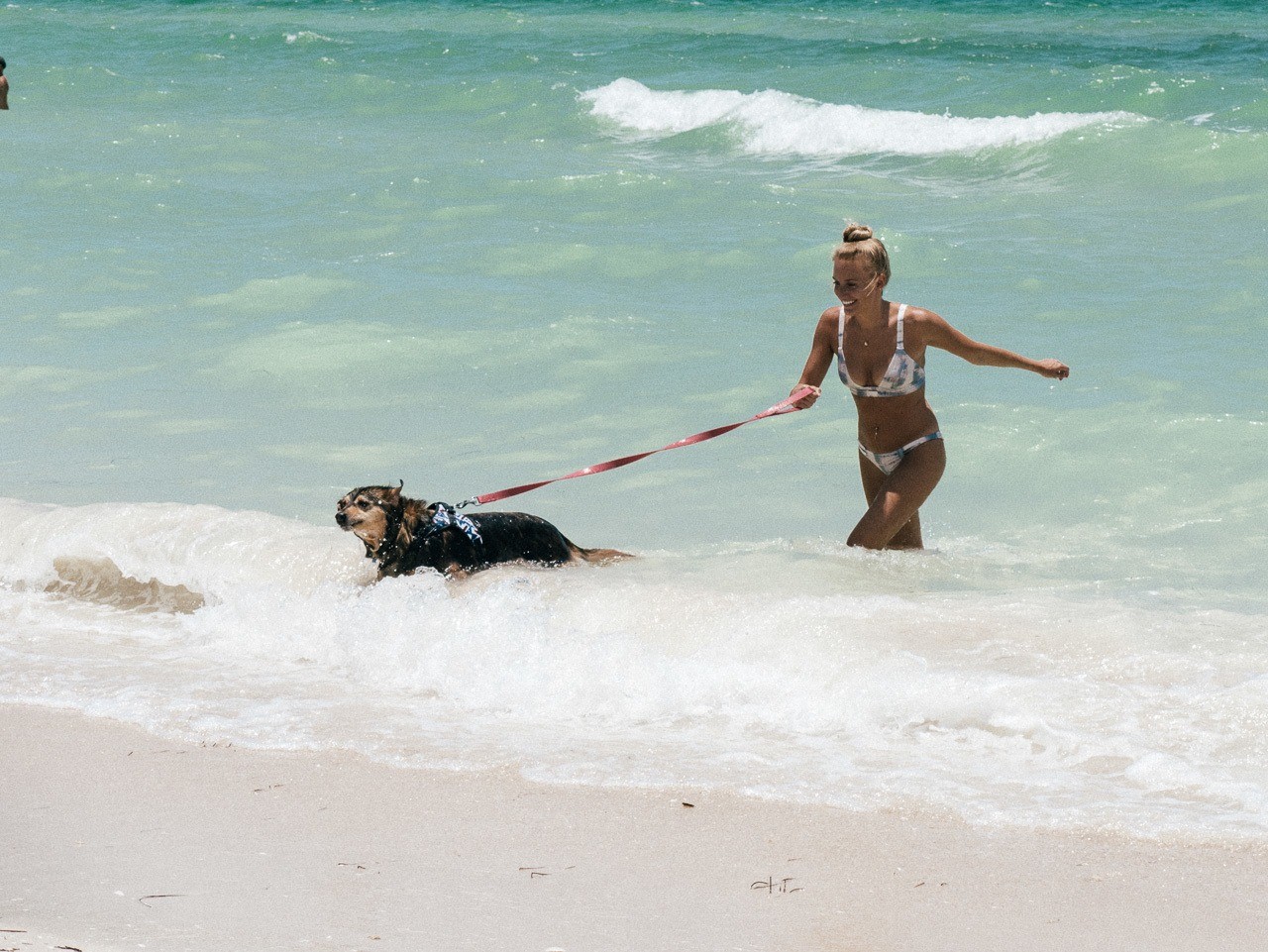 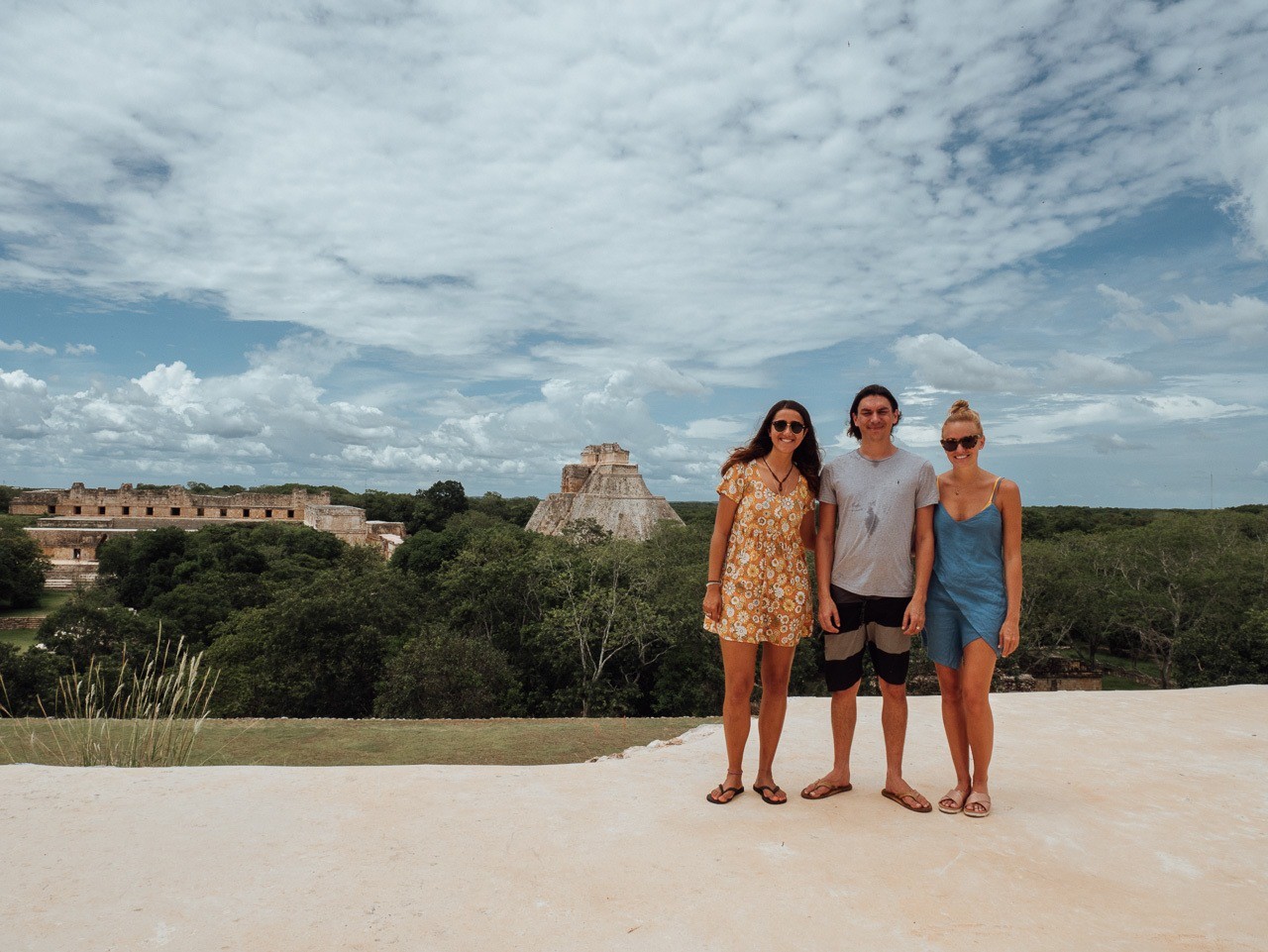 We love showing friends around the Yucatan and taking our dogs out to the beach, and speaking to locals make it all so much easier.

We visited Merida in December when we looked into moving there. I knew right away I would need to brush up on my Spanish so I started re-learning it immediately after that trip. I took Spanish for 5 years in school but that was 10+ years ago and without using it after that, I definitely “lost” it. While some came back to mind, it was very elementary, I couldn’t get my point across, and I definitely couldn’t understand replies. 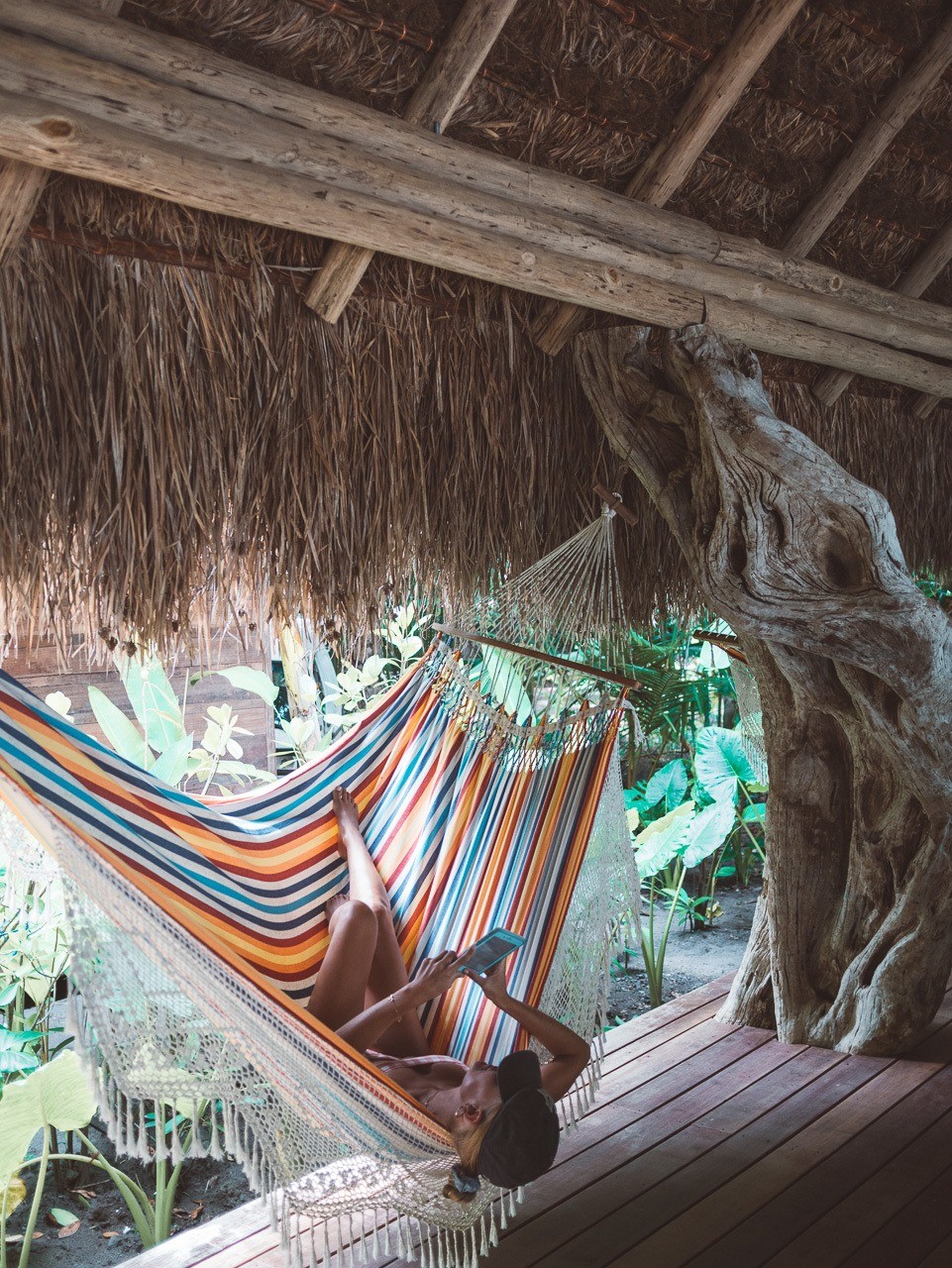 Practicing my Spanish in Chiriqui!

Why I chose Rosetta Stone for learning Spanish

I have known about Rosetta Stone for at least 10 years and it’s definitely the go-to language learning software I know the most, and trust the most (from knowing others, like my brother, who have learned using it). I downloaded a free app to try and learn, but it was tedious and I wasn’t moving forward at all yet the app told me I was 48% fluent (as if). I wanted to try my free options first – and it was sadly a bust.

In Merida, I thought it would be better as I could sign up for private classes. They offer quite affordable classes at the University but with my frequent travels, it was going to be impossible to join a class. Private tutors were too expensive.

With not just living in Mexico, but planning trips like the one I just did in Panama and others I have planned in my mind around Central and South America, I really wanted to be fluent in Spanish. Rosetta Stone was by far my best option. It wasn’t a tough choice since the free app was not working for me and Rosetta Stone is much cheaper than taking a class, doing online lessons, and I can move at my pace – which is fast. I wanted to breeze through things quickly, not be at the pace of an entire class or tutor’s curriculum. I actually had a lot buried in my brain and wanted to be able to fast-forward a bit.

You can buy it as a monthly subscription so fast learners can save money. It’s on your phone and you can choose to download it or use it online. I recommend the best value option, which is a 24-month plan at $7.49 a month (or a one-time payment of 179.76). This is if you use my link to sign up as I have a discount price for you!

It’s usually $10.38 a month (or a one-time payment of $249). This was much cheaper than private classes and I considered doing one year but thought that with one year costing $131.88, I’d rather do a bit more to have it for a full two years.

The app has an iOS rating of 4.8 out of 5 which over 23,000 people ranking it and it’s available in 24 languages. I love that you can gift people the app and it’s actually going to be a great present for some friends this Christmas! 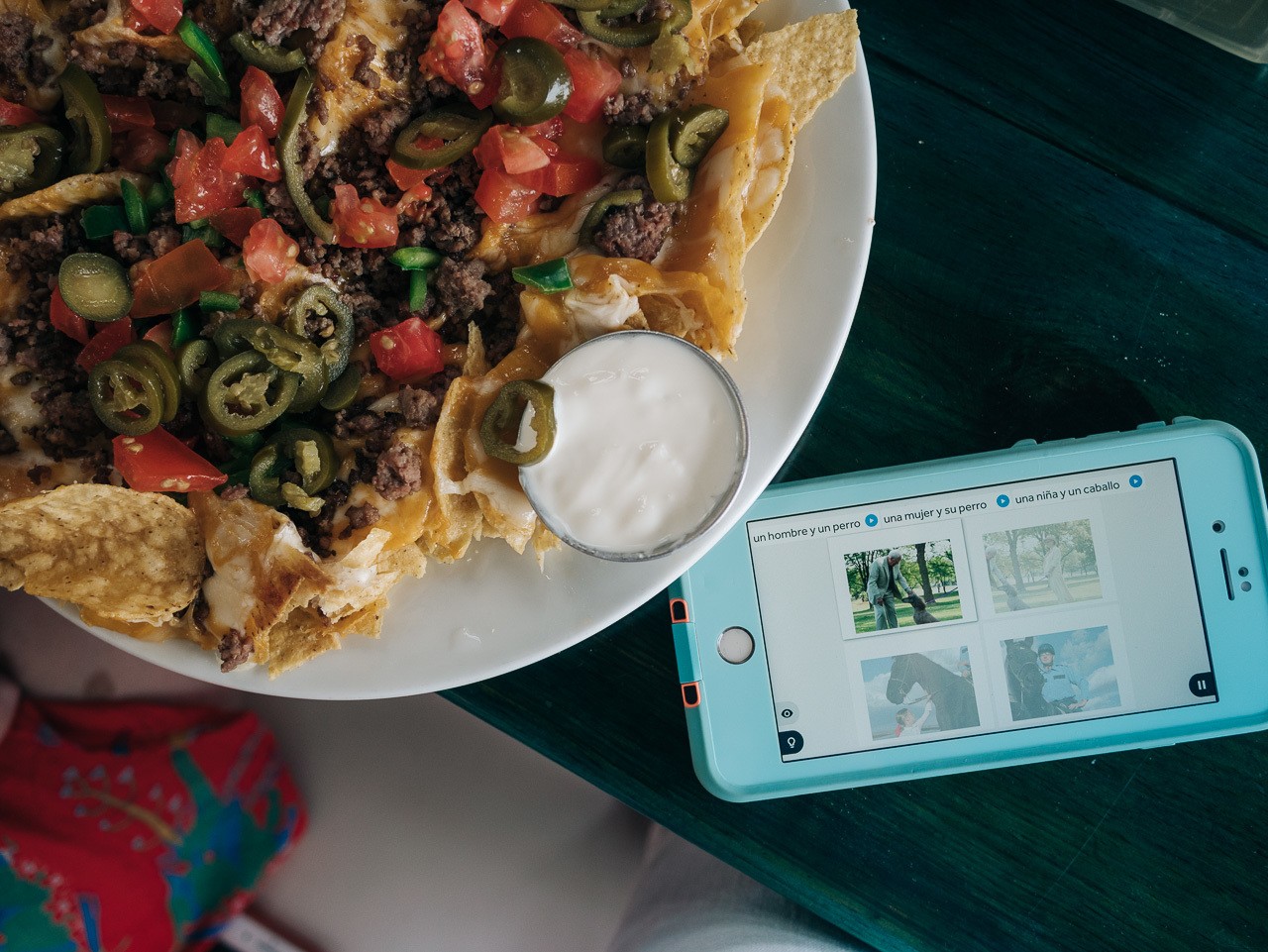 While waiting for food to come or dining alone while traveling is the perfect time to practice, like here in Bocas Del Toro! 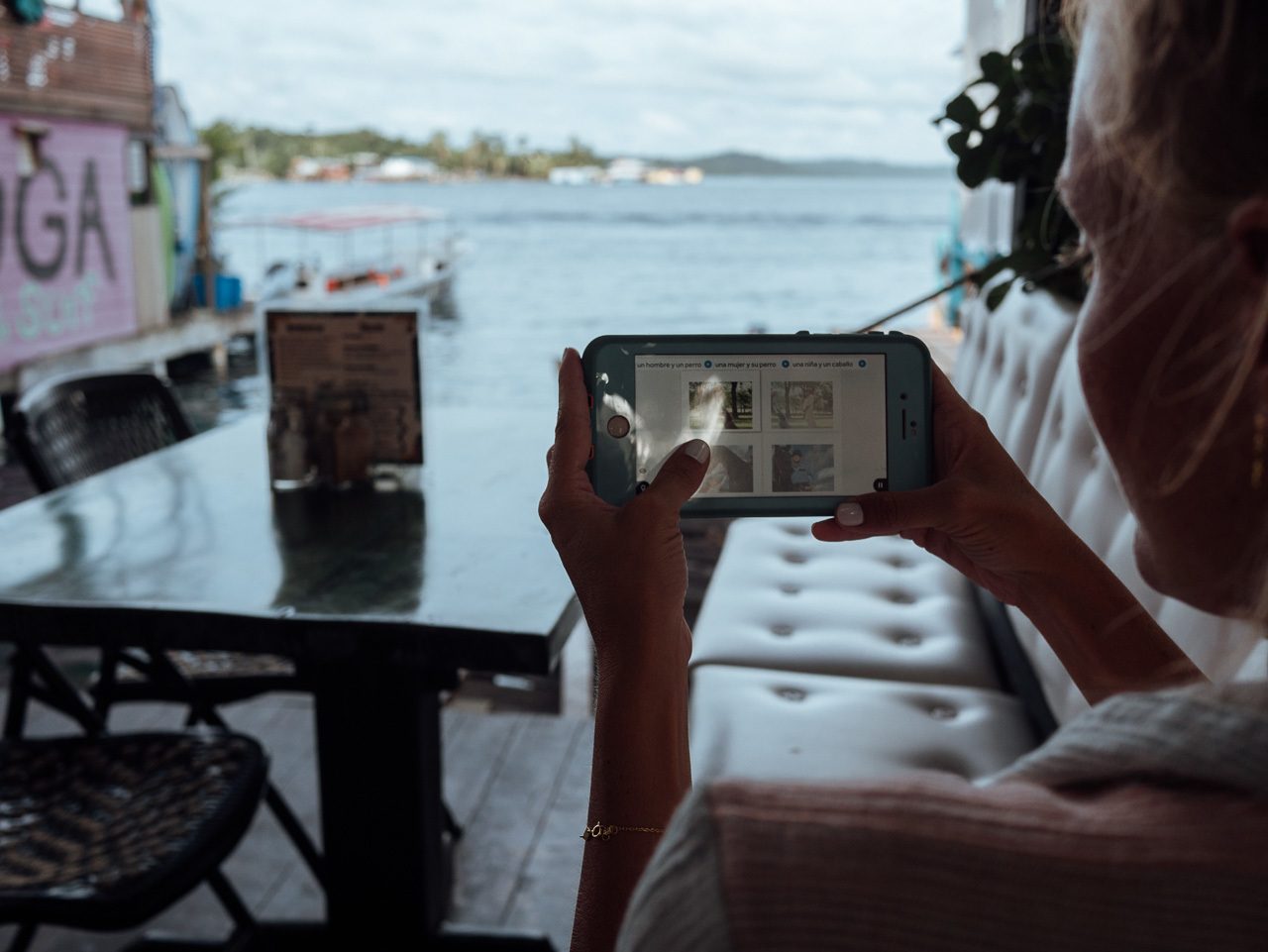 I breezed through the beginning on the content as I knew a bit going into it, but it is a relief to go through it again (at a fast pace) so that I know I actually DO know what I think I know – it’s a little bit of confirmation rather than just skipping ahead to where I think I am in Spanish. You can skip ahead – I’m just kind of OCD and wanted to do the full course.

The app is like a game – it’s easy to get through, is fun, and it’s repetitiveness isn’t too much (there is a fine line between repeating enough to remember it, and taking it too far to where it gets boring).

The app has TruAccent technology so it can listen to you speak and give you a green light if you are saying things right. This is key because if you don’t speak with the accent correctly, locals are not going to understand you. Even some common words I thought I knew from school are actually said differently than I thought!

There are speaking, listening, and “game” activities. There are stories and phrasebooks and various learning tools in the app, outside of the lesson you are in. The Phrasebook is unique as it allows you to access the most common words used in real life situations. I love that I can download sections at a time to use it offline – but that I don’t have to download all the lessons in the app which would take up more space on my phone (that should instead be full of photos of my dogs and my travels).

With the app, I am relearning some of the core verbs and nouns that I once knew but not in a boring way of learning one verb, conjugating it, and being stuck on that – but instead it would be learning the verb in a sentence with new nouns, which photos showing up the version of the verb like “I” or “they”. This app is a 180 from the free app I tried and I got through a 28 part lesson in one night because it is addicting, similar to a video game.

These are the 20 units so you can see what topics are covered in what order: 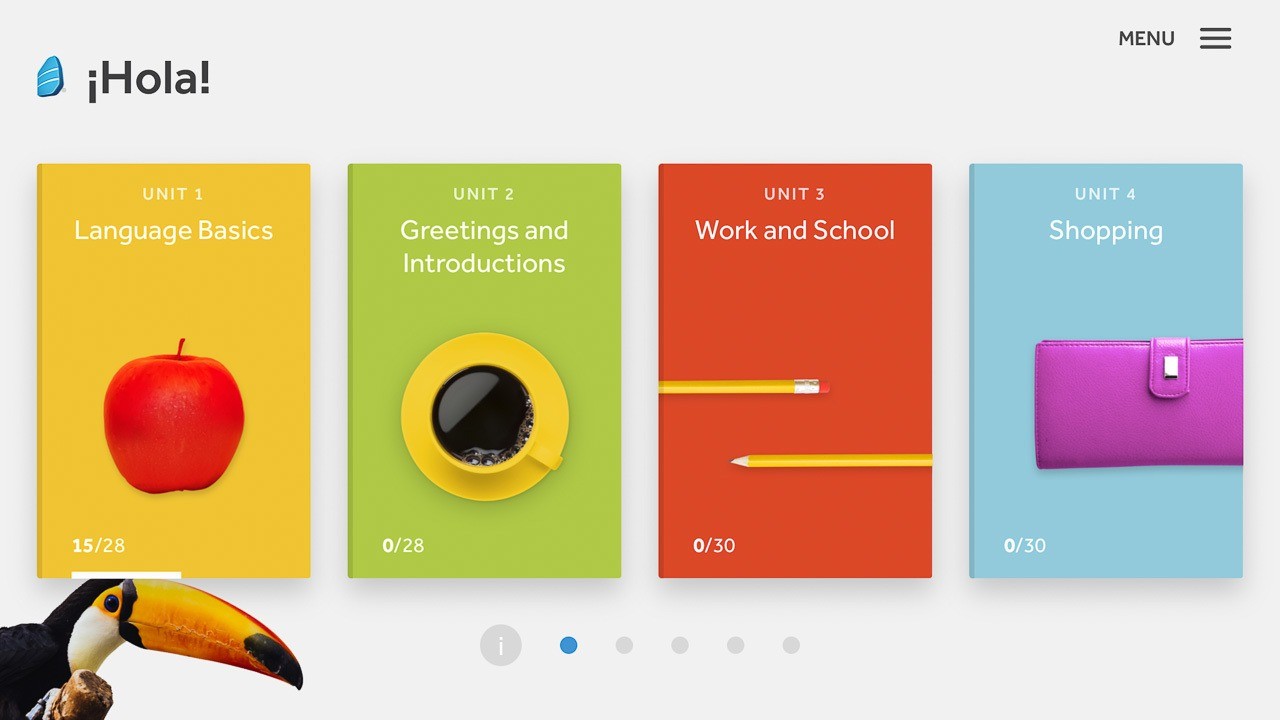 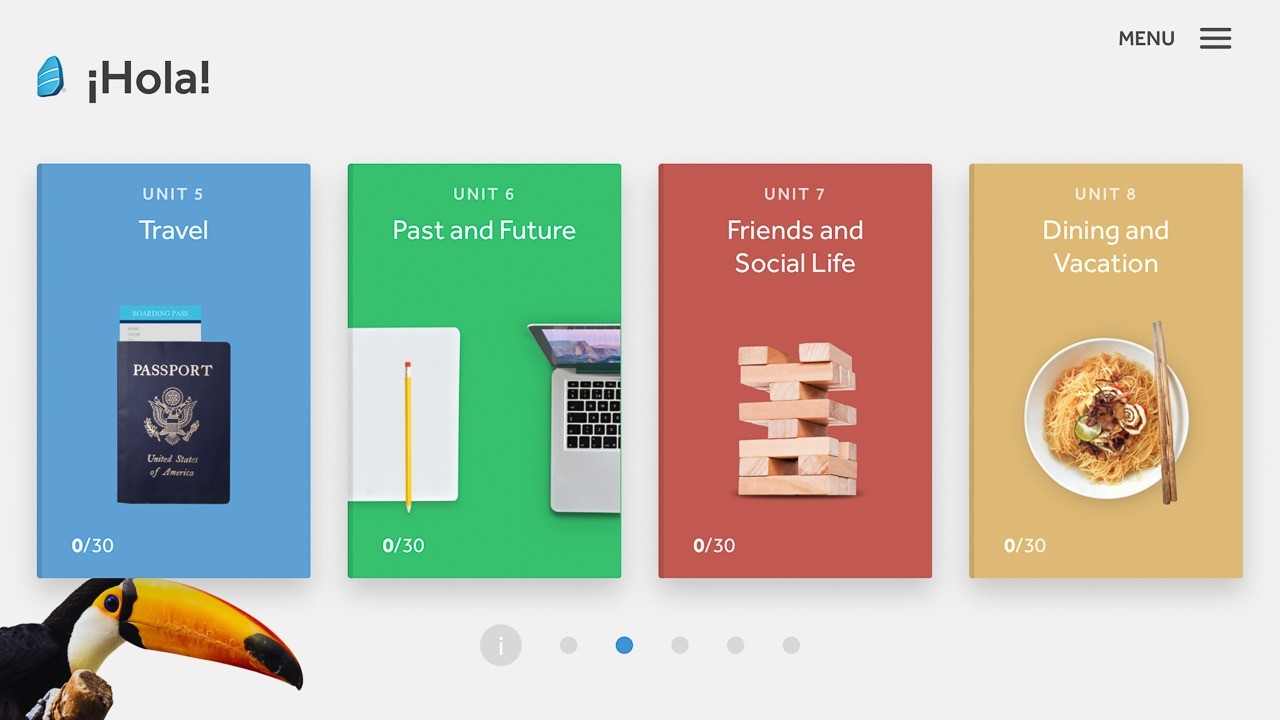 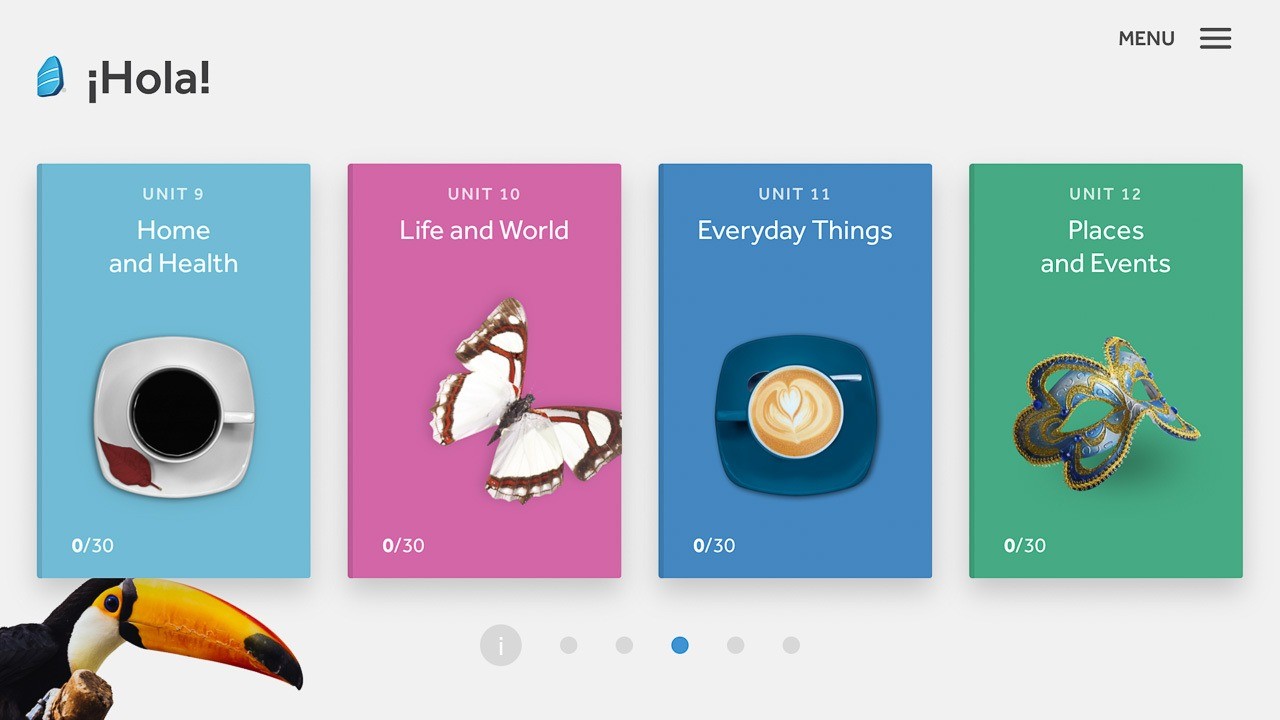 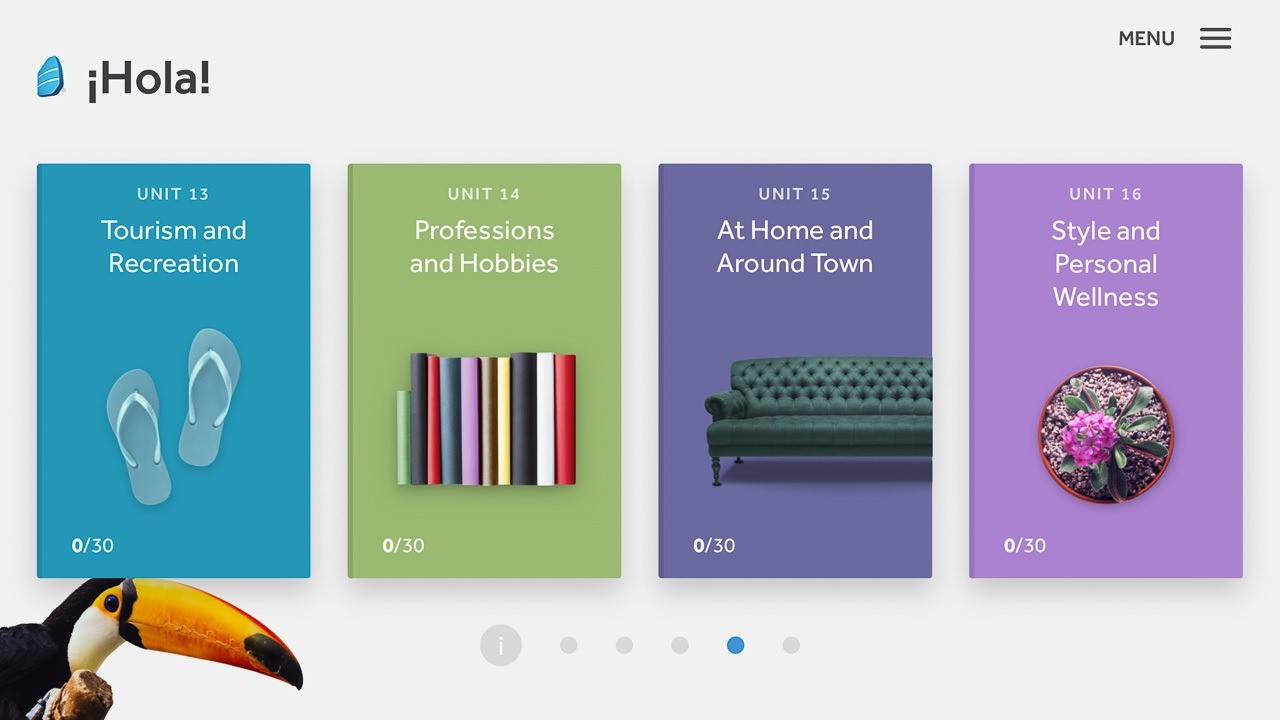 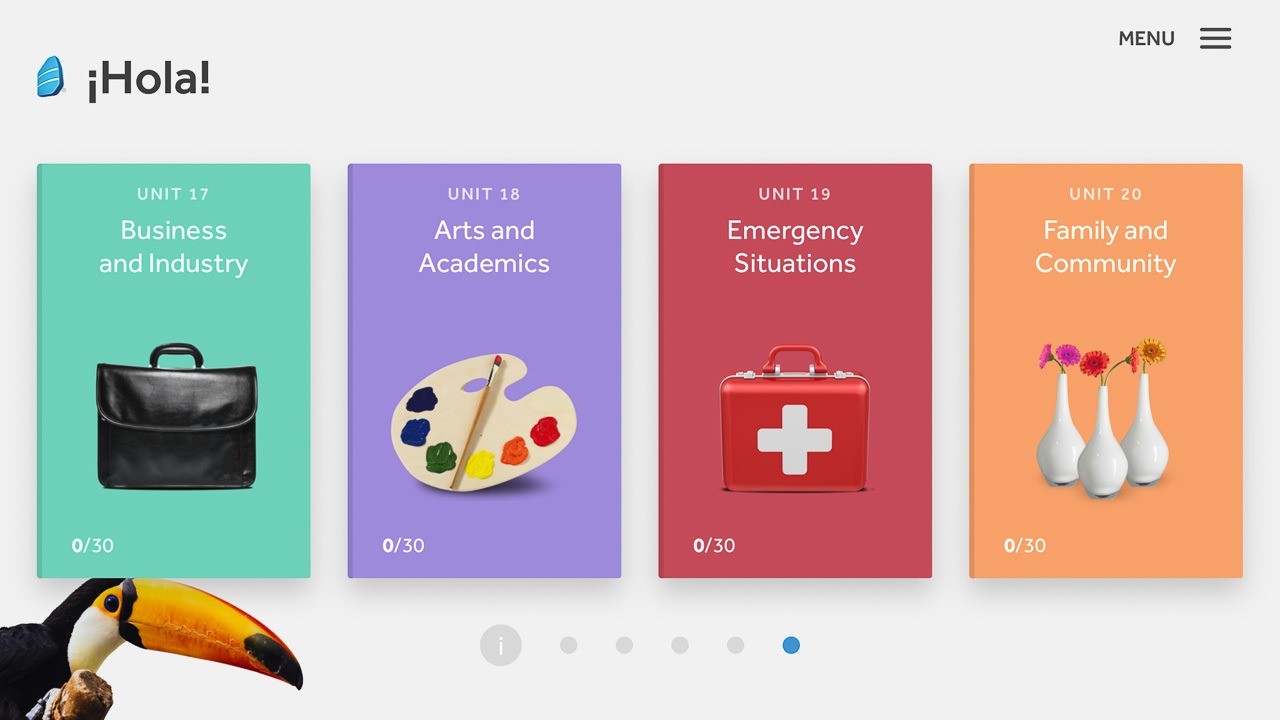 While they recommend 15 minutes per day to get through it at a good pace and become fluent in a language, I am trying to get through a lot faster. Their website says that on average users spend 1.15 hours per week on the app, in case you want to know what is “normal”. I was worried moving fast that I wouldn’t retain but since I’m living in Mexico and traveling in Latin America, I’m using what I learn in my everyday life, just reiterating what I’ve learned that day in real life conversations.

As you go through, you’ll be inside a “unit” but inside are SO many lessons, usually around 30. It keeps your progress for you so you stay organized. 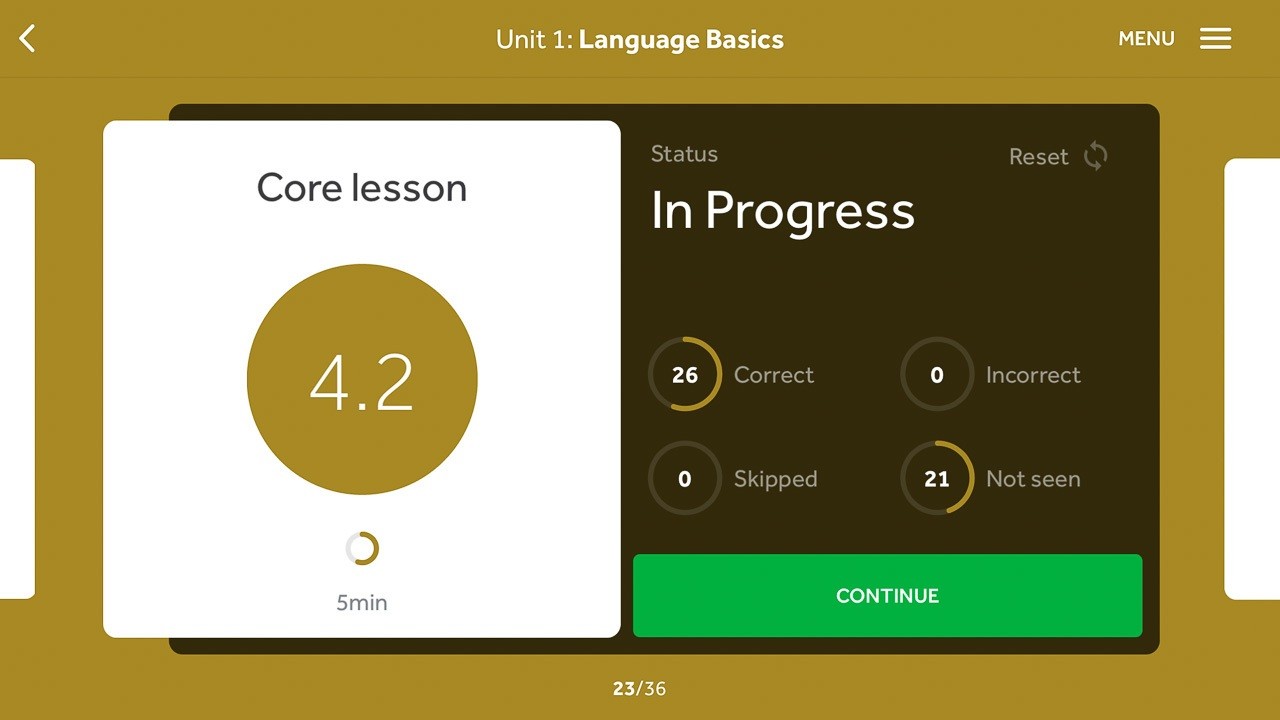 The hardest thing about another language for me is listening and being able to translate that. Most learning apps or classes speak slowly so you can understand, but the locals aren’t going to do that. Instead of listening and translating, Rosetta Stone (to me) encourages understanding the language being spoken without needing to translate it word for word, while they talk at the same pace a real person would – by using their Dynamic Immersion method which allows you to learn the language, not just the words. So necessary! 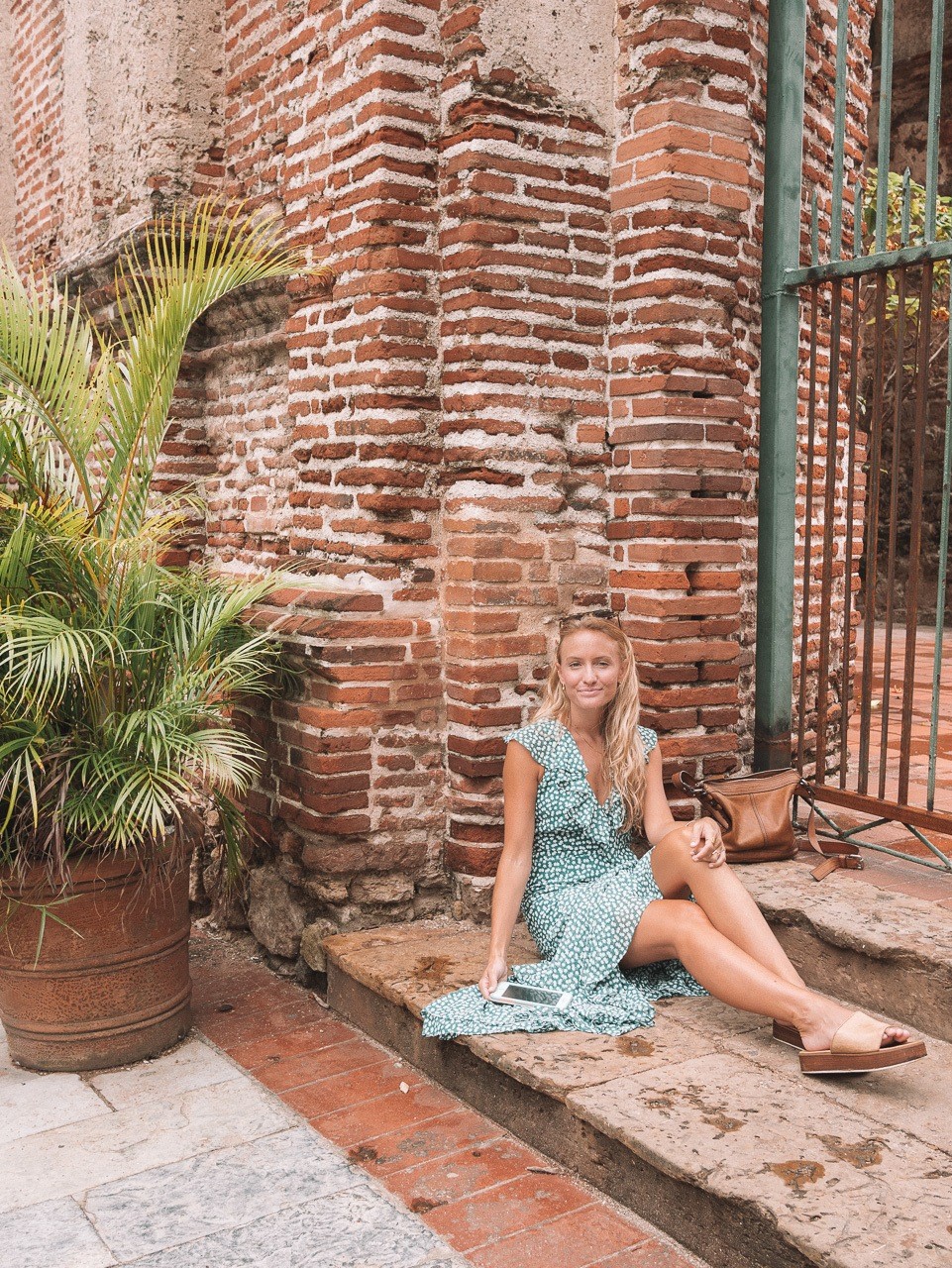 Downtime in Panama City, waiting for a taxi with my app out!

A look at the lessons

I think taking a look at the styles of learning is important in deciding if the app would work for you, so I took some screenshots of the various learning styles they use. I can’t really explain how the speaking and listening goes, but hopefully, these can give you a sneak peek.

So, as an example of how one little lesson might start. In this case I had already learned the word “la mujer” (woman). They were teaching “lleva” and “zapatos” now, which are first being introduced. Since you know “woman”, you can figure out the rest with the images. 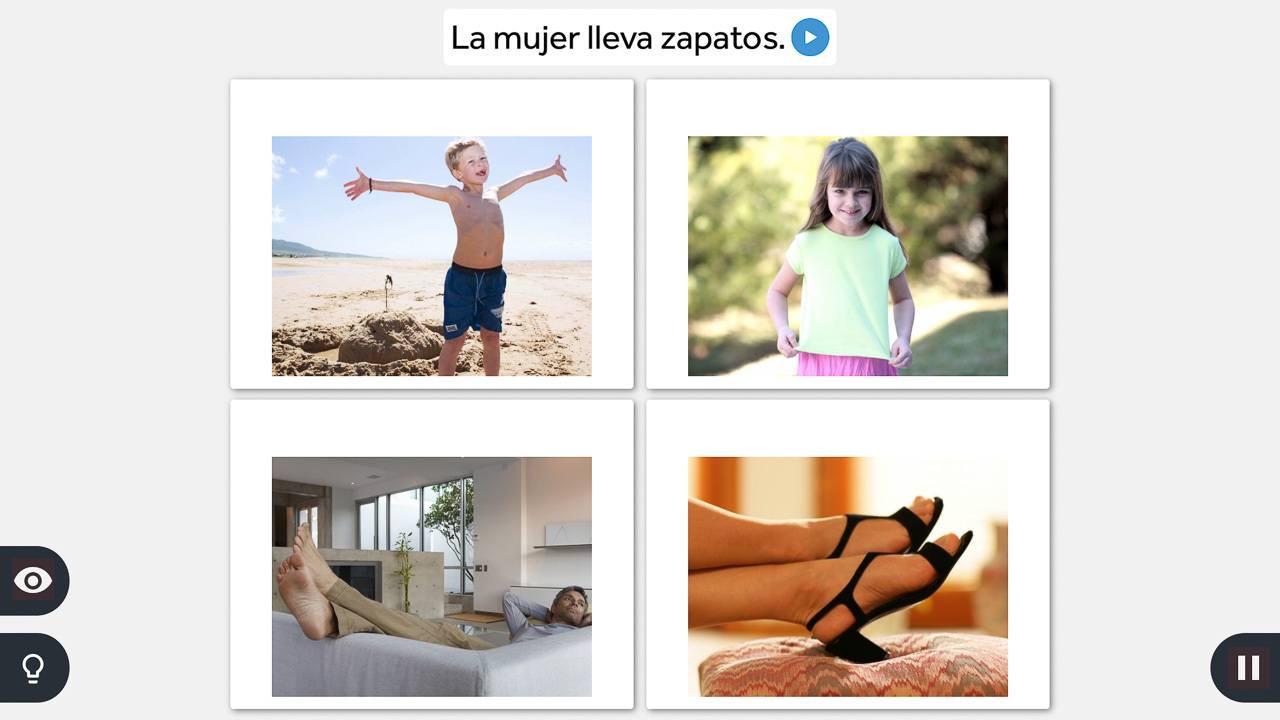 Then, after you match that text, another sentence comes up. Again, we know “child” already in this case (el nino). So, we know that the girl must be wearing a shirt – so we just learned the rest of those. You’ll match all 4 images with text. 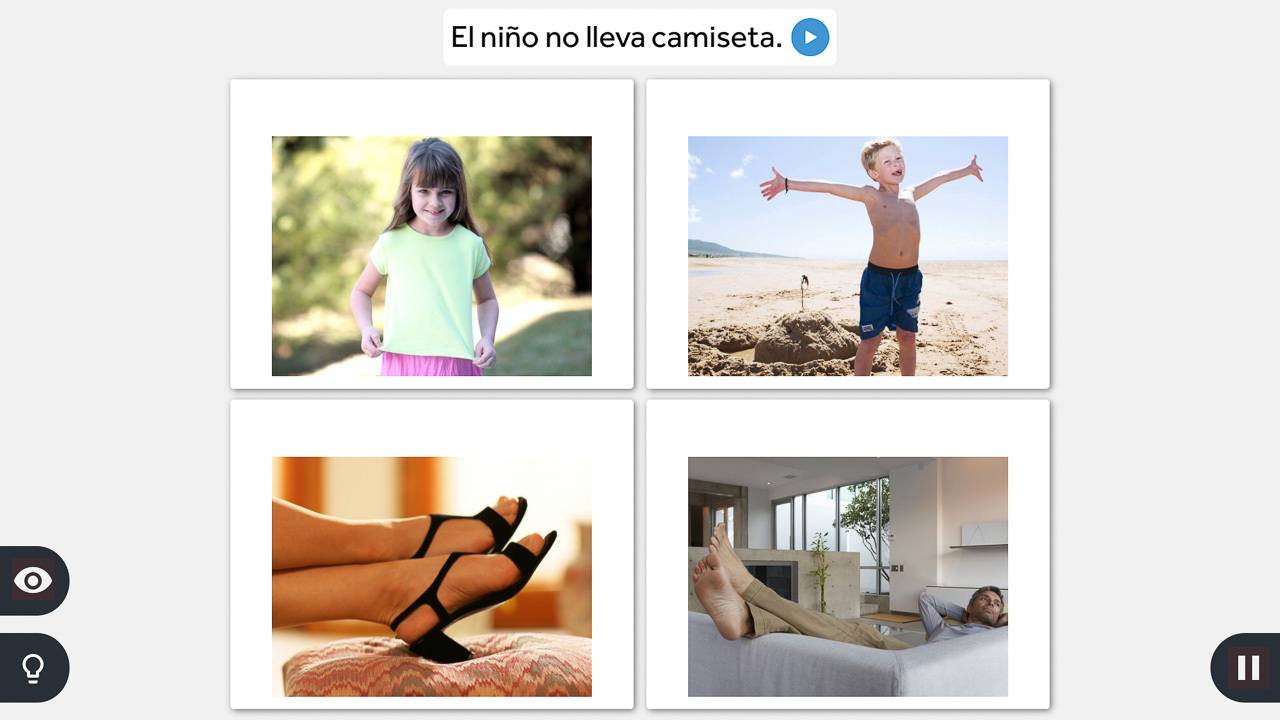 The next images will come up. This time they are throwing in numbers, groups and conjugating that verb. It picks up like this through lessons while teaching you new words as you go along. I love this style of learning. 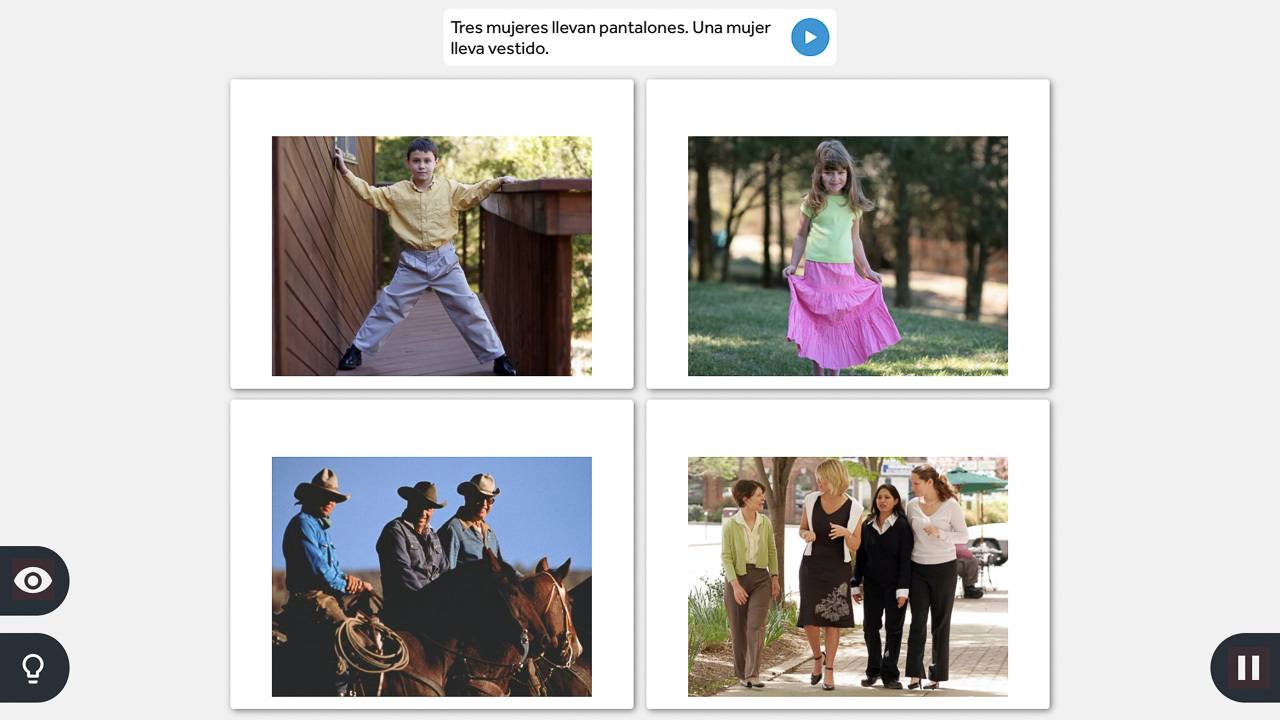 For more information, I think this video is really helpful.

How it’s been going and what’s next

I started learning in June so it’s been going on all summer. I’m happy to say I feel confident talking to people in restaurants, asking for help finding something in a grocery store, talking to my taxi driver about not just directions but asking about life (where he’s from, if he’s married, etc) and getting inside scoop on cool secret places to go in Merida!

I now can have conversations like this confidently and not in a joking “I’m bad at Spanish way”. I don’t have to intro a conversation with “I’m really bad at Spanish but I’m trying to learn…”. I can just speak and they reply without it being a big deal. I’m not nervous to speak Spanish.

Right now, the biggest thing I need to learn is phrases that are used that don’t translate, more vocabulary, and more being able to understand others. I’m glad I took that app for 24 months so that I can now slow down a bit and pick up some vocabulary each day. I hope that in around six months I can say that I am MUCH more conversational and will be able to write a follow-up to this and eventually write a post about being fluent!

Learning a language as an expat is KEY to fitting in, but it’s also the biggest thing to make travels easier. I can’t express how important it is to know the basics before you travel somewhere, especially if they don’t speak English there but even if they do, to show respect and in return get respect.

If you want to try learning a language with Rosetta Stone, you can click here to see their monthly subscription rates for Spanish or you can go to their homepage to see what other languages catch your eye! If you want to give someone the “gift of learning”, a year of Rosetta Stone is literally the best gift ever. 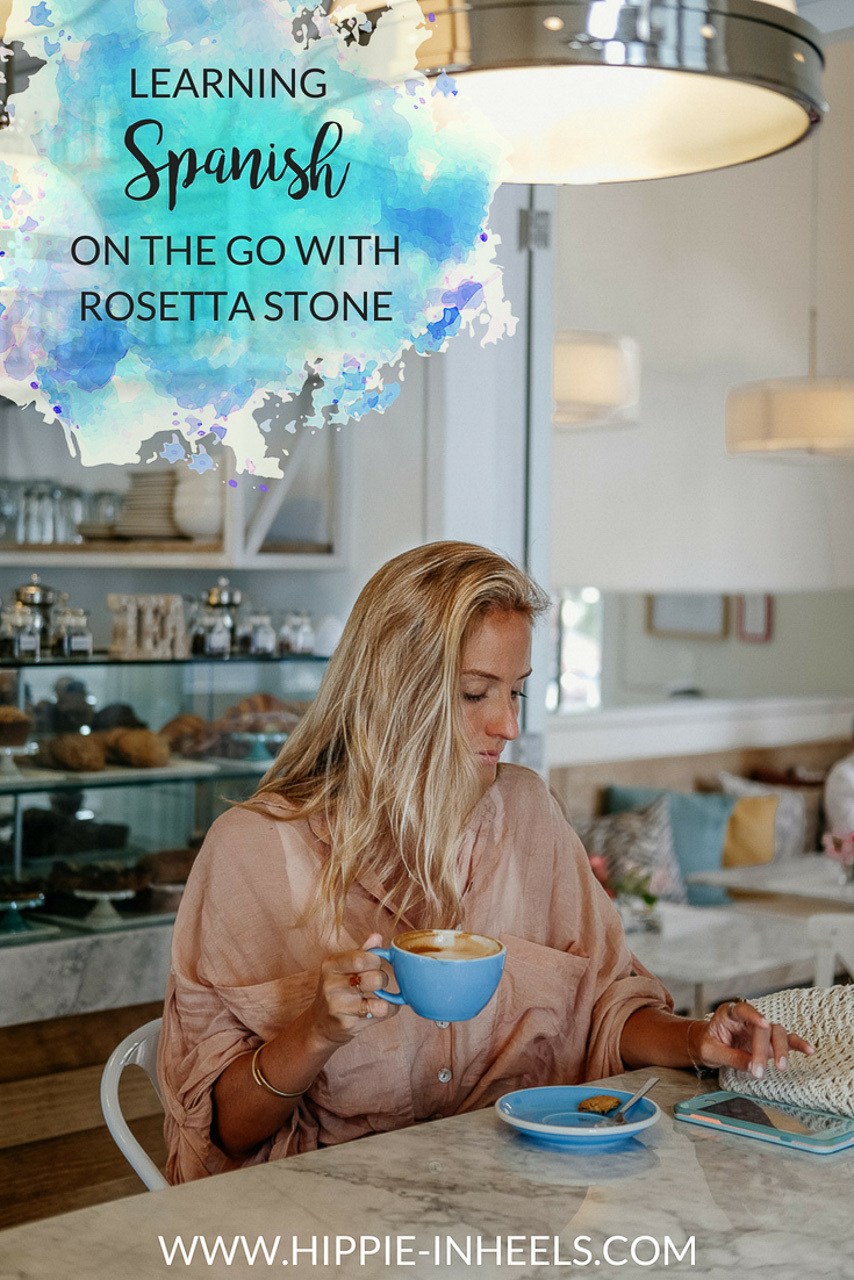