How many mornings start out with you opening your front door to a bucket of blue water in your face? Followed by a sneak attack bucket poured from the balcony… It happens every year in Goa and this was my first year to celebrate.

I have a video of our day at the bottom that I just LOVE! 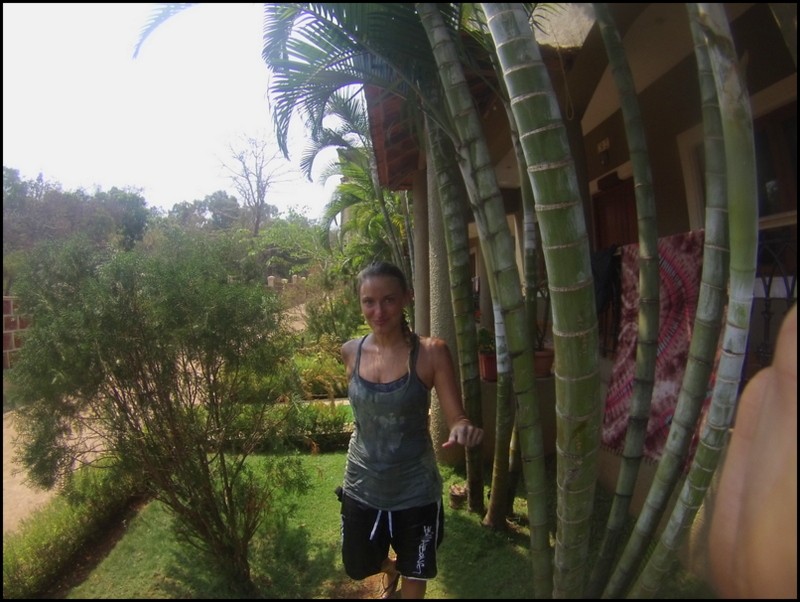 After my water attack. Yes, as Ben kept reminding me, I do look like a 12 year old boy. I had to borrow his shorts because I didn’t want to ruin mine!

The springtime festival Holi, also called the festival of colors or festival of love, is most Indians favorite time of the year whether Hindu or not. The festival signifies good beating evil and a time for forgive and forget. 9/10 Hindus I asked had no clue why Holi got started- but wiki tells me Holi is about being devoted to Vishnu and his triumph over his evil aunt (Holika).

The color is because Krishna was born cursed with blue skin, which he was quite insecure about. His mother had him approach a girl, Radha, and color her face so they could become a couple.

Kids and adults alike run around all day chasing and “playing holi” with buckets of water and fistfuls of colorful powder. You might get it thrown straight into your mouth and eyes or you might get it gently wiped on your cheeks- it’s all fair game! The water is sometimes died with powder. We had bucket upon buckets of water thrown into our car as we drove around with the windows down.

I can’t imagine this holiday going over so well in America.

Everyone is in high spirits and most people are the street are playing, not watching. You can throw paint on a 100 year old woman if you want to, no disrespect there! You can take a random baby and spin them around; people will laugh! People run around with squirt guns and drive around (like we need) sneaking up on people.

People will play music from big speakers at parties set up along the street. Holi is a time when bhang (a form of cannabis) is encouraged and not an arrest-able offense. Most people are drunk.

Some men will use this as a time to grope women. Gross, but true, as one guy tried and failed with me! You can see Ben push him off in the video, so he goes for Ben instead. It’s such a happy environment it leaves the girl wondering if she should get mad or just pretend it didn’t happen- which is exactly why the men choose Holi to do this. Bummer. The other environmental negative is some villages lose days worth of their water supply.

Goa Holi Video (make sure to watch in HD)

It was a chaotic day! You’ll see a party in Mapusa, the villages of Parra, and a restaurant in Assagao. This was my first GoPro attempt and I loved filming! Hopefully will get better at editing on the next one. Also, after you watch it my other youtube video might play (a ladyboy crew singing Moulin Rouge). I tried to change it, but really- you’re lucky I could even figure out how to use iMovie and get this video up! Baby steps…

Holi paint will eventually come out of your skin and dark hair. It came out of some of our clothes but not all, so wear something old. If you wear nail polish you can prevent your nails from staining. As of yet it has not come out of the lightest parts of my hair. I should have put coconut oil on before but didn’t realize how badly it stained. I shall have purple tips on my hair until I cut it off! The paint is not up to the same standards as the west (like you would get at color run) and the chemicals can harm animals so don’t put it on them. 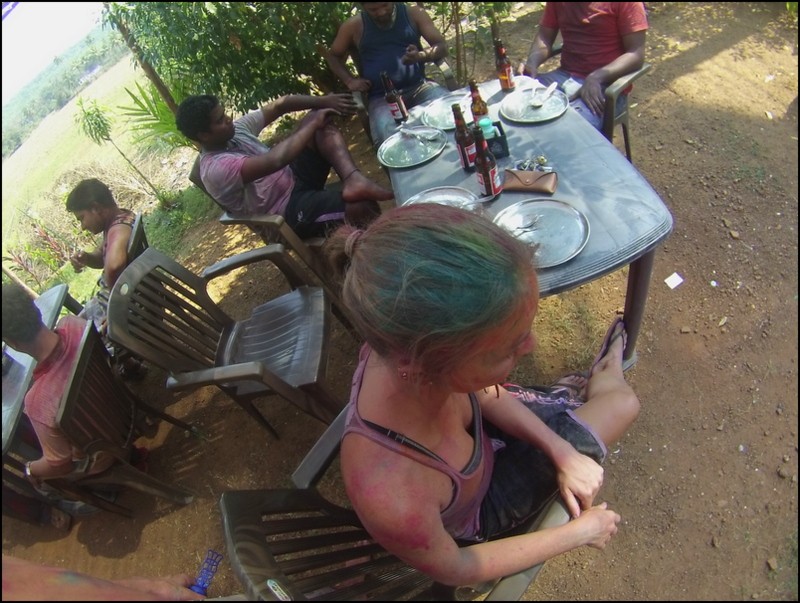 Things I tried to get the color out of my hair (that didn’t work): coconut oil, apple cider vinegar, lemon juice, oil based shampoo. The internet lied to me about all of those. It’s worse on colored or damaged/dry hair.

PS: Coming to Goa? I wrote a 170-page e-book, Insider’s Guide to Goa. After five years of living in Goa, I am confident this book is the most comprehensive, up-to-date guide to Goa plus it has all my secrets inside. Click here to buy it now.