Exactly How to Start Teaching English in Seoul, South Korea

I’ve asked a fellow travel blogger, Ashley fromWanderdolls, who has been teaching english in Seoul, to share her experience with you guys. She is sharing it in a 3 article series, starting with how to start teaching English in Seoul. Feature image from Carmine.shot.

How to Start Teaching English in Seoul

Upon finishing university all I knew for sure is that I wanted to travel. A speaker came into my lecture one day and had mentioned teaching abroad as something she did upon finishing school.

I did some digging and found it was a pretty popular choice for those fresh out of school and looking for ways to travel – and of course among those who went into the education field.

I took a Teaching English as a Foreign Language (TEFL) course that was hosted at my school but turned out I didn’t really need one. Sure, some places required them, it looks good on your resume, and I felt more comfortable teaching because of it. Buuuutttt… unless it’s a true college course, part of your major or you’re a licensed teacher, most schools don’t care if it was thousands of dollars in class or a fifty dollar online course.

Side note: Although there are different acronyms – TEFL/TESL/TESOL there is virtually no difference in them.

Once I completed my course, I scoured the internet for ESL teaching jobs.

My TEFL instructor suggested Asia for first-time teachers, as the demand is quite high. Google took me to a few forums and job boards but the best results were found through Dave’s ESL Café.

The majority of the postings were from China and Korea but you could find jobs for anywhere – from Costa Rica to Poland.

With a little research, I determined that I wanted somewhere that I could make enough money to live on comfortably and send some home for student debt payments. This ruled out a lot of South America and Southeast Asia.

The salary would be comfortable to live on whilst there, but with exchange rates, it wasn’t nearly enough to send home.

After a few applications and back and forths between companies, I was beginning to get some job offers.

Some were offering me contracts without an interview – a big red flag – and this was primarily from Chinese schools. Others had very long drawn out applications that included essays on what I liked about their culture and why I wanted to teach there – this came primarily from Japanese companies.

I received an offer from a school in Hong Kong, and it looked pretty good, but the cost of living was just so high that without provided accommodation I just couldn’t do it.

Most companies from South Korea on the other hand, provide round trip airfare, accommodation, and even meals! This was great to hear as a broke recent graduate.

I received some job offers and had a phone interview and that was that. All was left was logistics and I’d be set for my first job in Korea at Seoul English Village.

Job hunting in Asia: they favor white North Americans with a ‘neutral’ accent. Adding a photo to your resume is all but mandatory (but you do send your passport in). This can be shocking to some when hunting for jobs and seeing titles like “Caucasian female teacher – US/Canada only – send resume and photo.” Also to qualify to teach in most countries in Asia you must be from a ‘Native English Speaking Country’ – Australia, New Zealand, South Africa, United Kingdom, Ireland, the USA, or Canada. 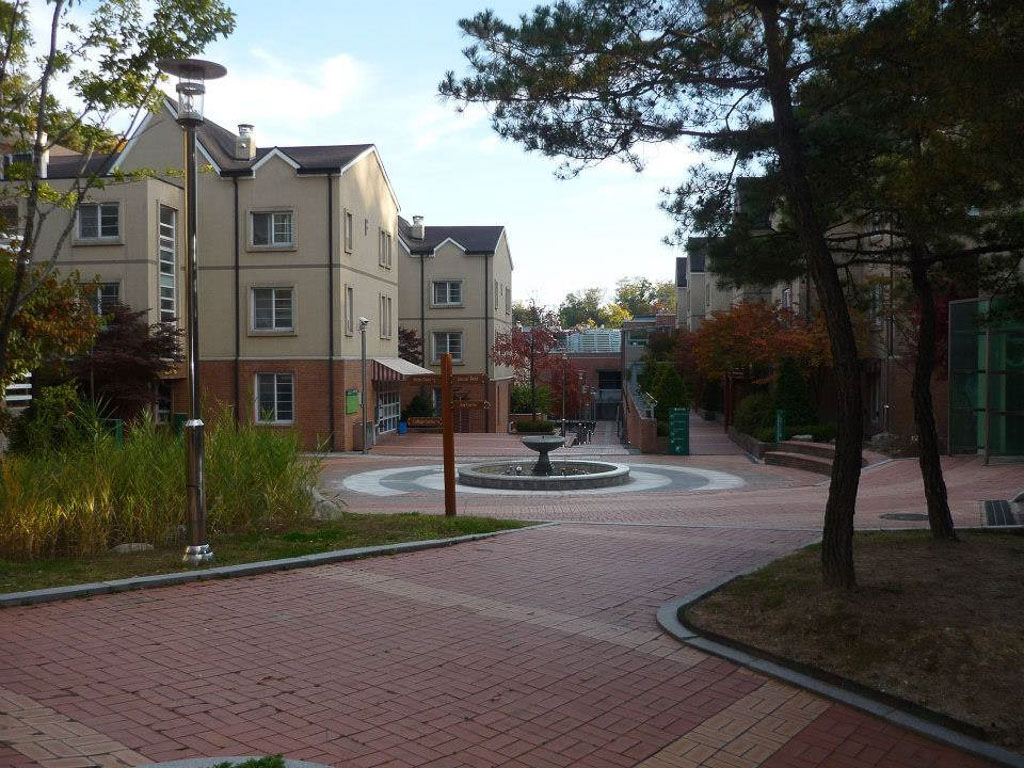 I was sent the contract the following day and thankfully already had most of my paperwork prepared. Most companies wanted assurances that you had all your documentation upon applying.

Your documents are required to be notarized and apostilled – check with your Korean embassy for exact details regarding an E2 Visa.

Off I went with my documents and signed contract to my Korean Embassy.

The whole process was completely underwhelming. Went in, took a number, gave them my papers and my passport, received a receipt like paper that said when I could pick it up, and left.

It took about half an hour. Luckily I was in driving distance from my embassy as I hate the idea of my passport being in the mail, but if that’s not the case for you, you’ll need to mail everything in and wait.

A few days later I picked up my passport to see it complete with a full page visa sticker! This is the first one I’ve ever gotten, so I was pretty excited. I emailed my future employer and they booked me a plane ticket! 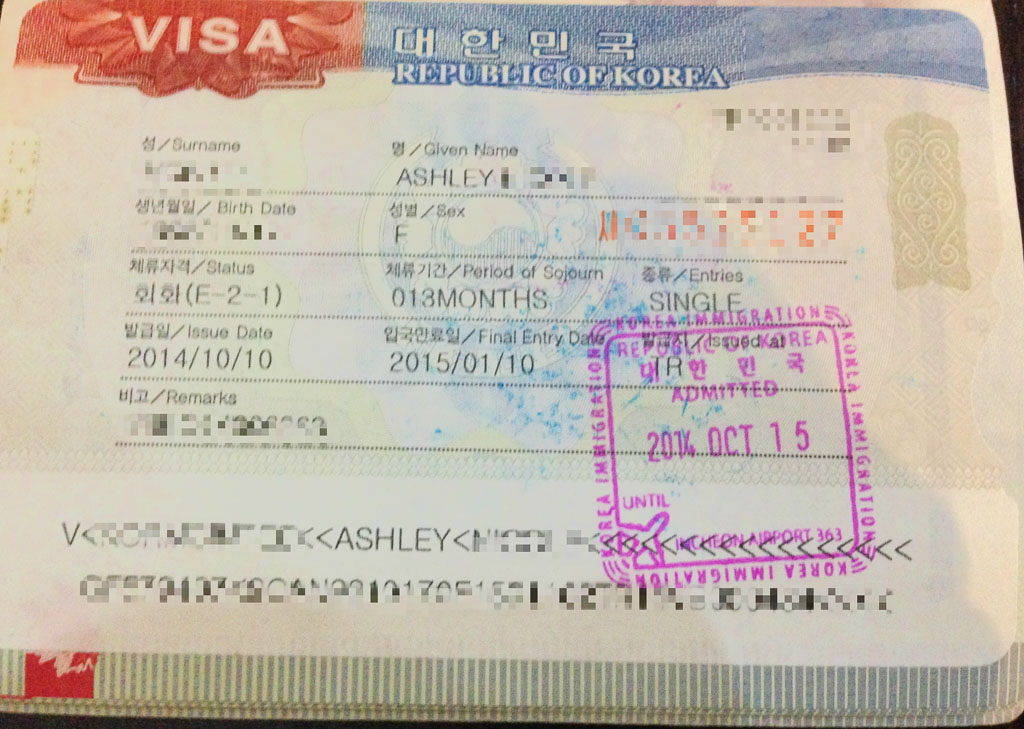 Everything happened really quickly. I was set to leave in only a few days!

I was so excited though, I got in as much family and friends time as possible, packed my bags and off I went.

Thankfully I had a direct flight from Toronto to Seoul but it was still painfully long. Fifteen hours of flight time. But then, I finally arrived.

Drowsy and confused I found my bags and went through immigration. Everything was in order. The Incheon Airport is fantastic and has multiple English speaking help desks.

Regardless of if you’re getting picked up or not (unfortunately I wasn’t), they’ll point you in the right direction. If you’re headed into Seoul, DON’T take a cab. It’ll be a long and expensive journey. You can take a bus or the train and end up central enough and then if need be take a cab.

Your first couple weeks at work will be BUSY. Not only will you have orientation with your school and learning how things work, but…

All of this while being super jetlagged.

You’ll get the hang of it though, meeting other teachers really helps the transition and spending time exploring is really exciting. Although you’ll be tired and things are new just put yourself out there. Accept that invitation for BBQ, or the lunch or coffee. Introduce yourself to the Korean staff so you don’t stay in a little foreigner bubble. You’ll thank yourself later.

Now that you know how to start teaching English in Seoul, check out post #2: what teaching and living in Korea is really like. 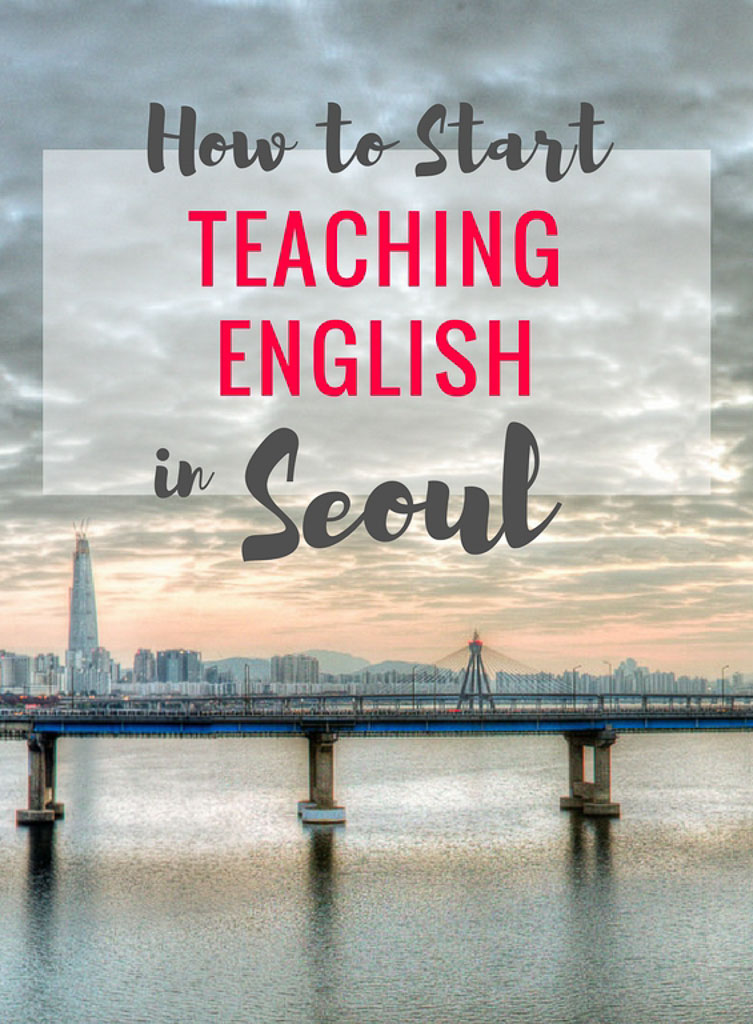