I briefly mentioned this back in another “This is India” post, but our driver got in a little fender bender that wasn’t his fault. The guy behind us hit the Innova pretty hard… twice. It was a group of Karnatakan guys down for Dasara holiday weekend. This is an example of how something small that would have been handled easily back home is handled in India. It’s also an example of now that I’ve finally learned to STAY OUT OF IT! Basically, even something this small can turn into a HUGE issue in India because of the phenomenon “rubber-necking” where some Indian (men especially) love to get involved in drama. They LOVE it. So, as a forienger it’s always best to stay in your car, keep your mouth shut, and don’t get out in take picture (whoops, I had to to show you guys!) 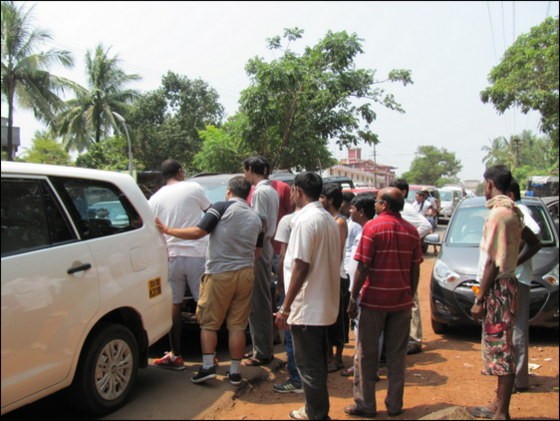 The Karnatakan driver denies hitting the car. He’s all “I don’t think it’s possible I’m the one who’s done that damage..” and our driver is all “umm, clearly you did and everyone here knows it”. So why wouldn’t these guys just give our driver some money? Well, they were denying because the man driving didn’t have a license.

Things started to get heated and this is when Ben and I sat firmly in our seats in the car avoiding eye contact with anyone.

The police were coming. Police are bribable in India as evertime who lives or travels here knows. As suspected, they watched from the sideline after marking the cars placements with chalk.

The driver of our car was the sweetest Goan boy. He had a lot of friends there that were local Goans on his side. The Karnatakans didn’t stand a chance… after all, this wasn’t their turf.

Seeing the desperate situation, one guy thoughT let’s just SLAP the shit of the karnatakans until they hand over the cash. And that is just what they did.

The police watched. The driver got his 2,000 rs. We drove off and finally traffic was no longer at a stand still- I mean, c’mon did you think we pulled over to the side of the road during all this?