There are two supermarkets in Anjuna: Oxfords and Orchards. I wanted to go to Orchards and Ben was all, “no it sucks”, but he is forever in my debt that we went because we saw this: Monkey Babysitting First of all, who doesn’t love monkeys? Second of all, who loves them more than Ben? No one. I was pretty sure we wouldn’t actually call them but like lightening Ben was on the case getting driving directions so he could play with these monkeys.

Before going we knew nothing about them or why they needed babysitting. Ben was like a seven year old on Christmas Eve. “How old do you think the monkeys are? Where do you think they come from? Wonder how many there are? Do you think I can keep one? I want to take one home. Can I?”

He started to drive very slowly because he can’t multi-task (like most men) and his brain was 100% on monkey talk. There was room for nothing else.

When we showed up we learned all about the monkey’s unfortunate situation- they are orphans and have to be caged or they would have been left to die in the wild. The owners of the house (well, mansion) are the people who started Animal Rescue in Assagao. It was in some backroads way past Siolim and very hard to find. The owners and monkey rescuers were on vacation in the UK so they had two Italians at the house watching the monkeys. The big ones need taken for walks, played with in the pool, fed, their cages cleaned, and more. The one little baby stays in the bedroom with the Italian couple and literally cannot be alone for a year. She has to always have someone with her or it will traumatize her.

Basically, the Italians need some time off and want someone to come be with the baby monkey.

Something new I learned is that monkeys HATE women. The male monkeys want to dominate women, and the female monkeys are threatened aka jealous! So, Ben could play with the big ones but I wasn’t allowed unless I wanted to lose a finger or more. 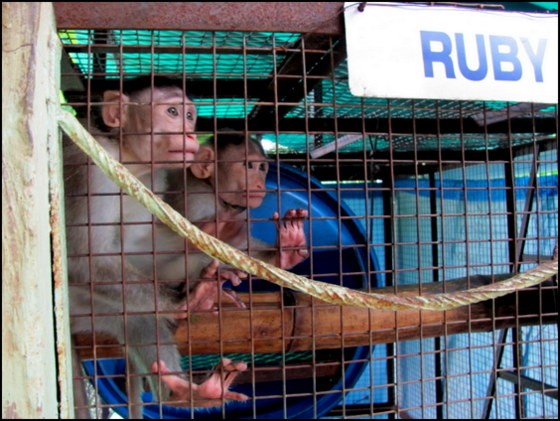 So, where do the monkeys come from?

Most are rescued as babies because their mom has been hit by a car or left the baby on it’s own. The babies cannot make it in the jungle alone so these people keep them. The other monkeys are ones that were brought into Goa as pets and then abandoned once they got bigger and hard to control. Some of the monkeys were very mean and were kept separate in cages.

Although the would have died on their own in the jungle, the alternative is that they are caged for life here. Once saved as a baby and taken care of like a child for a year, they cannot be reintroduced to the wild. It’s a huge project that the couple who own the place have taken on (imagine loving something so much you devote your whole life to it). What they do here isn’t easy work, so it’s all pretty amazing. There was a large wild monkey they were trying to get rid of (by catching it and letting it out somewhere else) because it was coming around and biting the caged monkeys fingers through the cages! If they let the monkeys out now, they would be attacked by wild monkeys.

We played with Nassi for an hour or so after we toured around the complex. She crawled around, ate okra, peas, and lettuce. She was very playful and you can swing her by her tail! If you try to pick her up though and pull her in close she’ll kick off your chest and run to her Italian mama. She did let me hold both her hands and throw her up in the air a couple times. So, that was my Monday morning last week.

Ben went back after that the following day and let the monkey groom his hair, and then had to wipe the little monkeys ass when he changed the diaper. I passed on all that… knowing most the monkeys there wanted to hurt me kind of turned me off the whole thing. I wasn’t really interested in volunteering as I’m too busy with work now, but Ben was really considering going in a few times a week, but alas work got in the way and he’s spent most of monsoon in Kochi.

To learn more about the Primate Trust India (the place I just told you about) or to donate check out the website. You can volunteer as well when you’re in Goa! You have to volunteer a minimum of one month though which makes sense because this isn’t a tourist attraction, this is really there to help the monkeys- and it takes time to learn HOW to help. Even in one day there, I felt bad that I only toured and didn’t take on more responsibility.

If you want to help and have the time, you should should out their site and see if you fit the criteria.