If there’s one thing you do in Langkawi, this should be it! I’d go so far as to say, if you’re on a gap year you should wait until Langkawi to do any jet skiing. All booking information is at the bottom of this post.

The tour is four hours long but you can go a little faster if you are pressed for time by spending less time at each place. There were multiple stops along the way which were all FREE so it’s not just the jet skiing, but the whole tour that is really great. 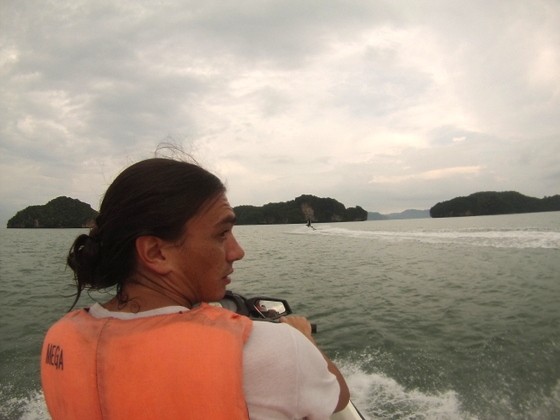 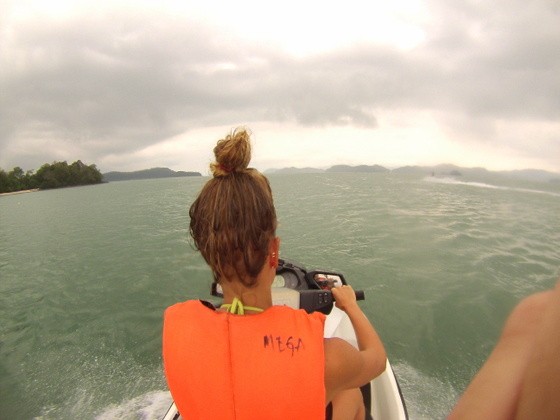 Our first stop was this UNESCO site. The area is called “pregnant lake” by the locals. Here’s the story/myth:

“There was a beautiful woman who the King really wanted to marry, so of course he did. He went away to war and came back a year later and she was pregnant… so it was NOT his baby. Angry, he turned her into stone and she cries still.” 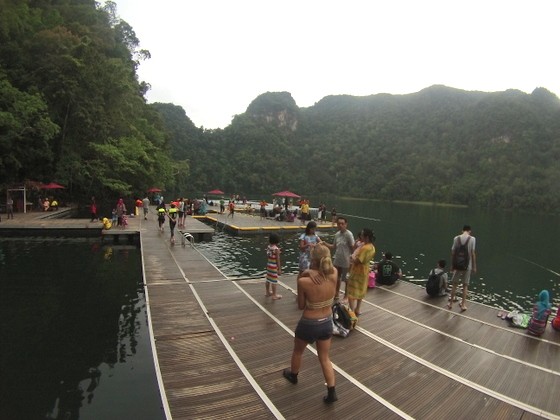 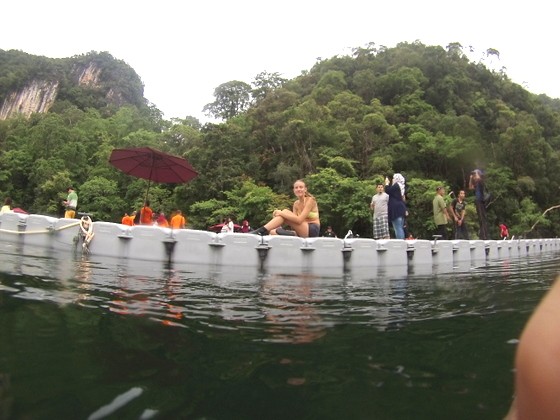 The rock does look like a pregnant woman lying down, and the sweet water lake in the middle are as they say, her tears. You can go from the jetty up some stairs to the fresh water and take a swim! You can rent little boats as well. In case you don’t like that story there is another one or 10!

“it’s a lovely fairy princess who married an earthly prince and got pregnant from drinking the water in the lake.”

FYI: bathing in this lake bestows fertility to barren women! That is if you believe these things ;)

Some of the rock formations are 550 million years old! You can see as you go around the many islands how the rocks are changing. Actually, Langkawi had more islands once but they fall into the ocean. The marble turns to limestone in the heat (metamorphic rock) and limestone isn’t that strong of a rock so the winds and salt water splashing take out bits from the bottom slowly until it’s gone. 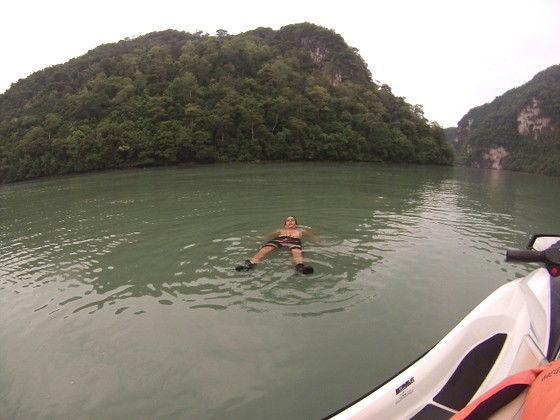 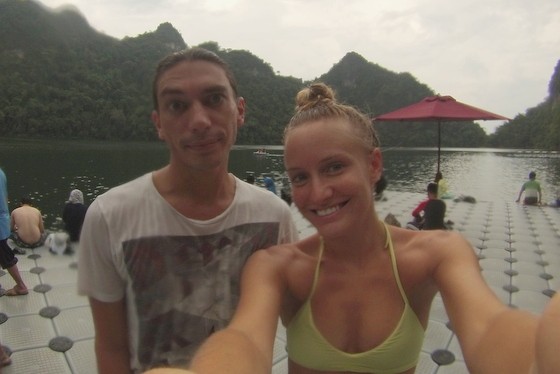 You get 20 or so minutes of “free go crazy time” on the jet ski. We were the only people signed up so got a bit more. We went crazy! You can go over 40 miles/hour… we were going nearly 45 just racing around the ocean and spinning out in circles. I loved driving that fast but just hated being on the back. The noises I was making were unnatural lol and Ben was just cracking up the whole time. I was almost always “about to fall off!” and I’d scream “BEN SULLIVAN STOP IT!!” and of course he wouldn’t. Our guide was laughing at us. We could have done that all day. Man, that was fun!

You’ll see 8 islands but not get off at all. These are beaches with snorkeling like Beras Basah island, private beaches with great views, areas of water very deep and famous for parties because there are no waves, and areas with high salt concentration you can easily float.

You can go up to the small island rock formations and go up under the protruding rock. I’m not going to lie, this part gave me MAJOR anxiety! You can see the black rock is very old, while the yellow is new where old limestone has fallen from the wind and rain. It’s scary thinking it could fall on your head.

You’ll go to an island were they feed lazy eagles chicken skin! There are 4 kinds of eagles and some are really big! 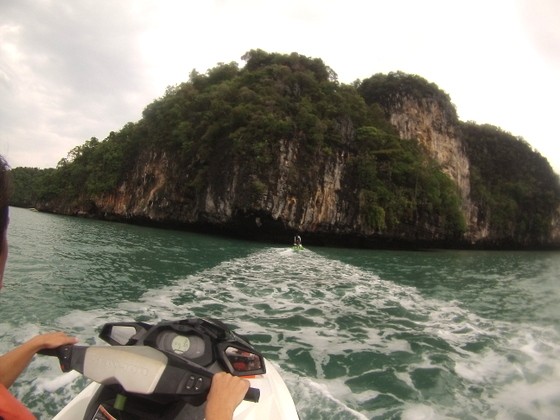 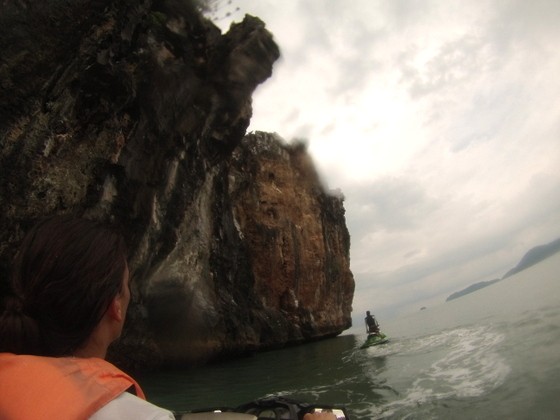 Near the Eagle feeding island is a closed camp. There was a death of a boy by python something like 10 years ago… it’s very sad but of course there are pythons in these areas and even in my home Goa. I think it’s great that Langkawi actually closed it down as a place to sleep. Some other governments don’t care as much about the people and more about money.

A word on animals: there are snakes and monkeys. Of course you shouldn’t wander into the islands on your own. There are also small komodo dragons! I didn’t get to see one. We were told there are no sharks or crocodiles, but in other areas there are so let’s just assume there are everywhere, right? 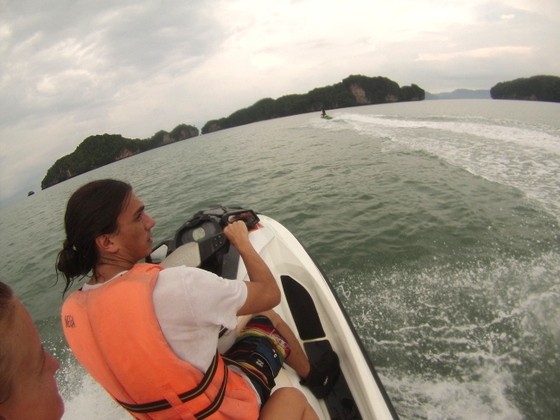 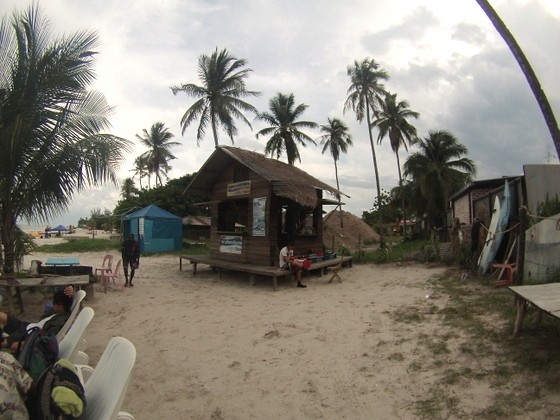