Maldives is the definition of paradise to many with its turquoise water, white sandy beaches, and abundant sea life. Little known to the world until the 1970s, its resort islands are now world-famous and attract tourists from all over the world. Before 2009, people can only stay on resort islands, but now you can stay on local islands as well. 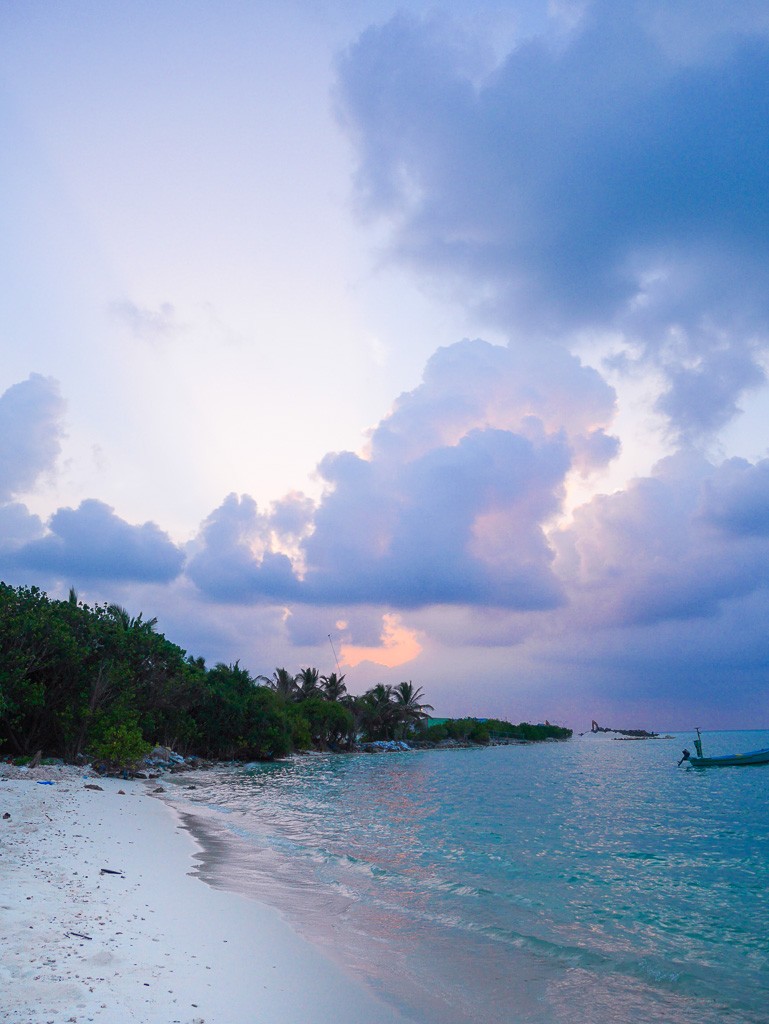 As a Muslim country, there a few rules that you should be aware of but the internet has blown a few points out of proportion. Having stayed on the island of Gaafaru with Mirian Sky Hotel for 6 days, I came to learn a few things as well as bust a few myths, the first being that you can have a budget holiday in the Maldvies! So here are the 7 things to expect when visiting a local island in Maldives:

Maldives Local Islands, What to Expect

1) It’ll take money or time to get there 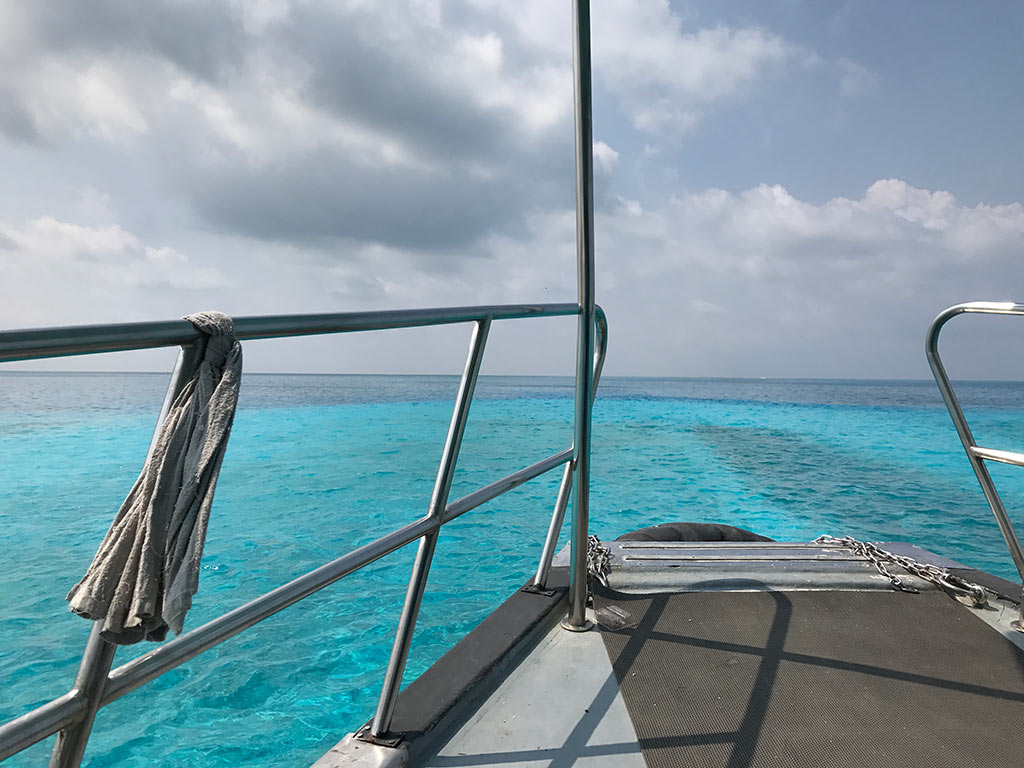 The Gorgeous blue sea near Gaafaru – photo from the public ferry!

Unless you are staying close to the capital, otherwise you’d have to splash some dosh and or time to get around. Maldives is one of the most dispersed countries in the world, with 289 square kilometers of land but only just over 200 inhabited islands.

You can get the local ferries, which are fairly cheap, from Male Ferry Terminal, however, these can take from 30 minutes to 14 hours depending on your destination. The slight more expensive option is by speed boat, which 1/3 the time but costs more and of course, there are seaplanes. 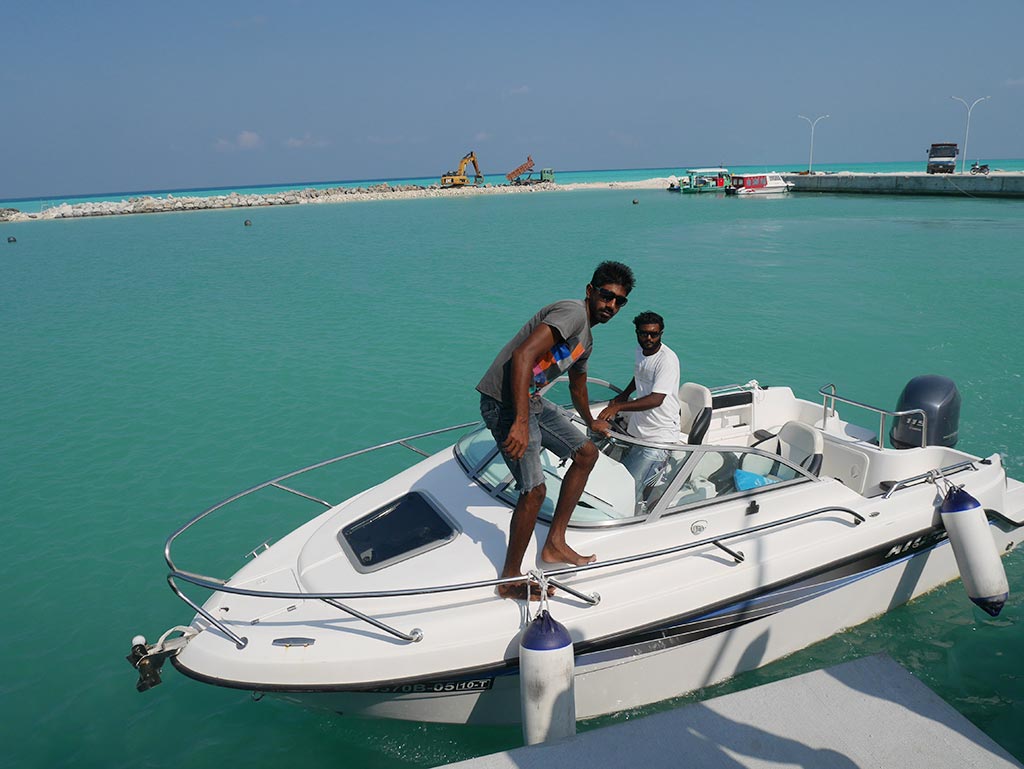 Speedboat is a fast but costlier alternative

For example, for me to reach the island of Gaafaru, it’d take three hours on one daily ferry that cost 5 USD. But if I pay 200 USD per boat for a speed boat, it’ll only take an hour.

I’ve talked to a traveler who took a 14 hour night ferry to one of the far-reaching islands to see the bioluminescent planktons. It cost him 900 rufiyaas as opposed to almost 500USD on seaplane.

2) Designated bikini beaches and cover-ups outside of it 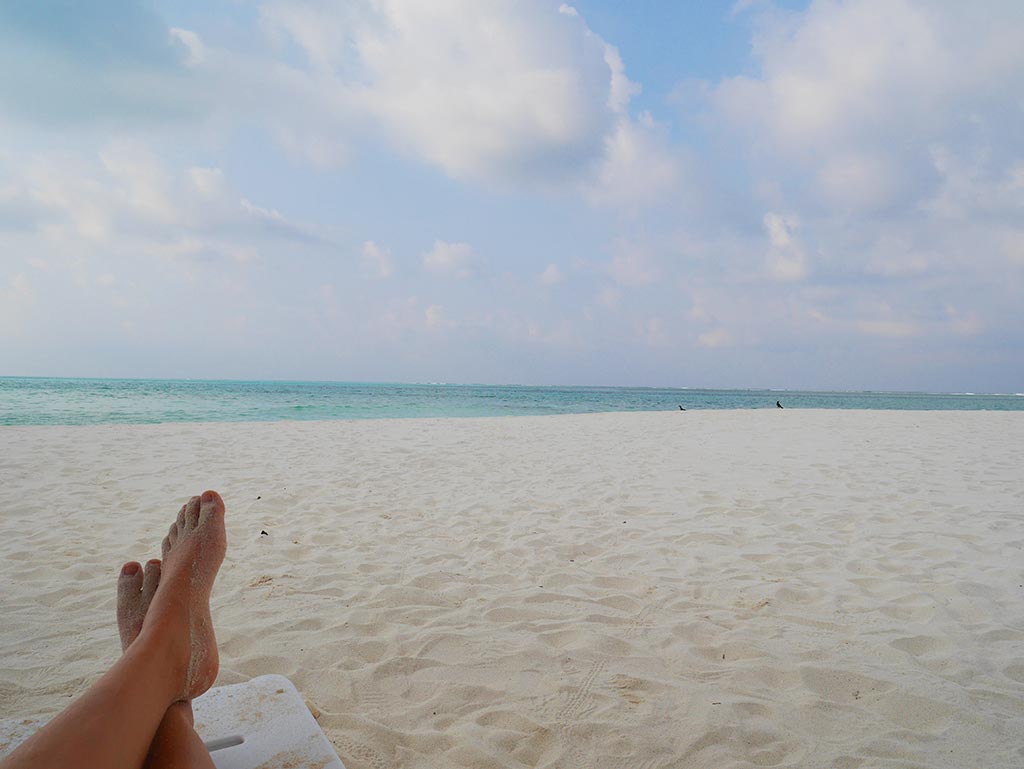 Chilling on our own private beach

A lot of people aren’t aware or forgets that Maldives is a Muslim country. How does it affect us? You might ask. It is forbidden for one to wear swimwear only outside of designated bikini beach on a local island. While it’d be respectful to cover your shoulders and knees as well, the rules regarding this to foreigners are much slacker and you are only required to cover up.

This goes for both male and female. I tried to at least cover up my knees or shoulders if I can.

3) A slower pace of life and spontaneity 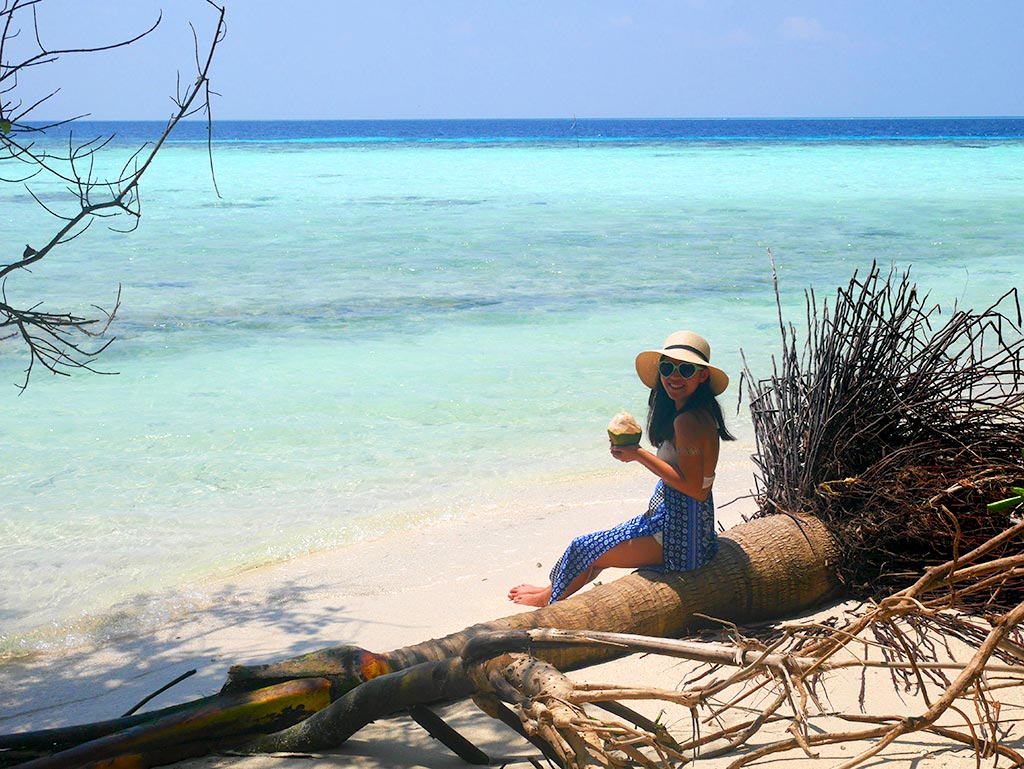 Everything it’s more relaxed in Maldives!

Having only stayed at Mirian Sky Hotel on Gaafaru, I’m not 100% sure this applied to every island. However, things were definitely more relaxed and spontaneous on the local islands. Whatever we wish to do is decide a night before or the morning of the day, and we were often surprised with a side trip along the way.

Take my first day, for example, I was only under the impression that we were going turtle snorkeling but we ended up visiting a sandbank and having a BBQ lunch on a local island as well! And that night, they decided to host a sunset beach dinner for all of us – talk about spontaneity! 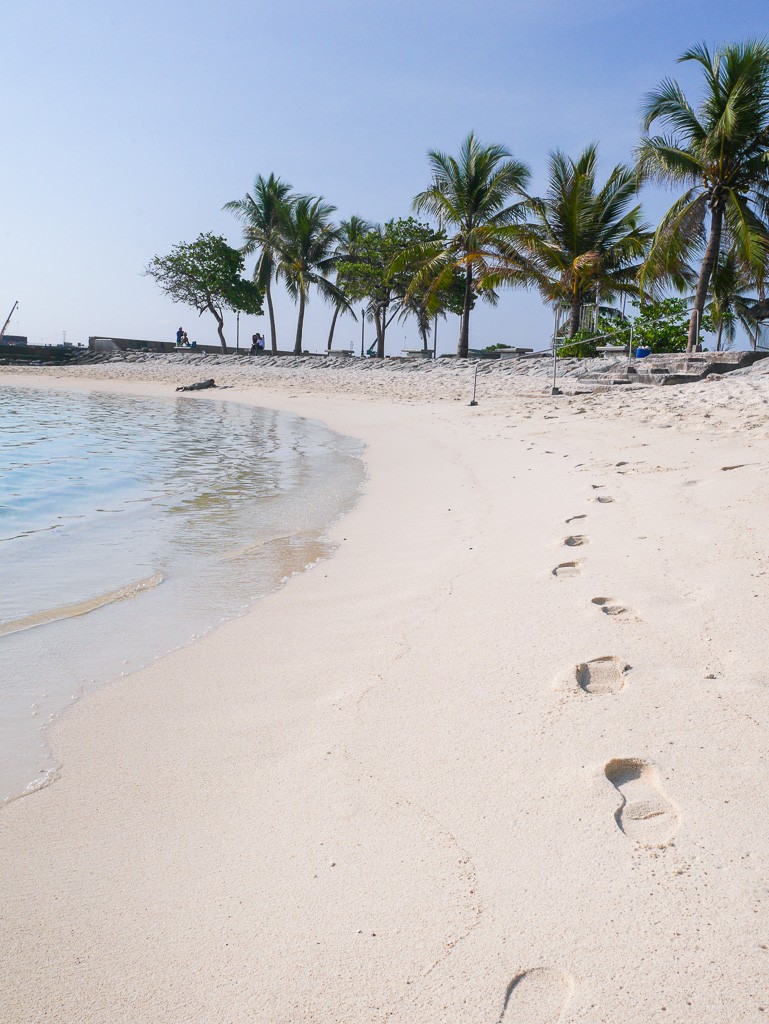 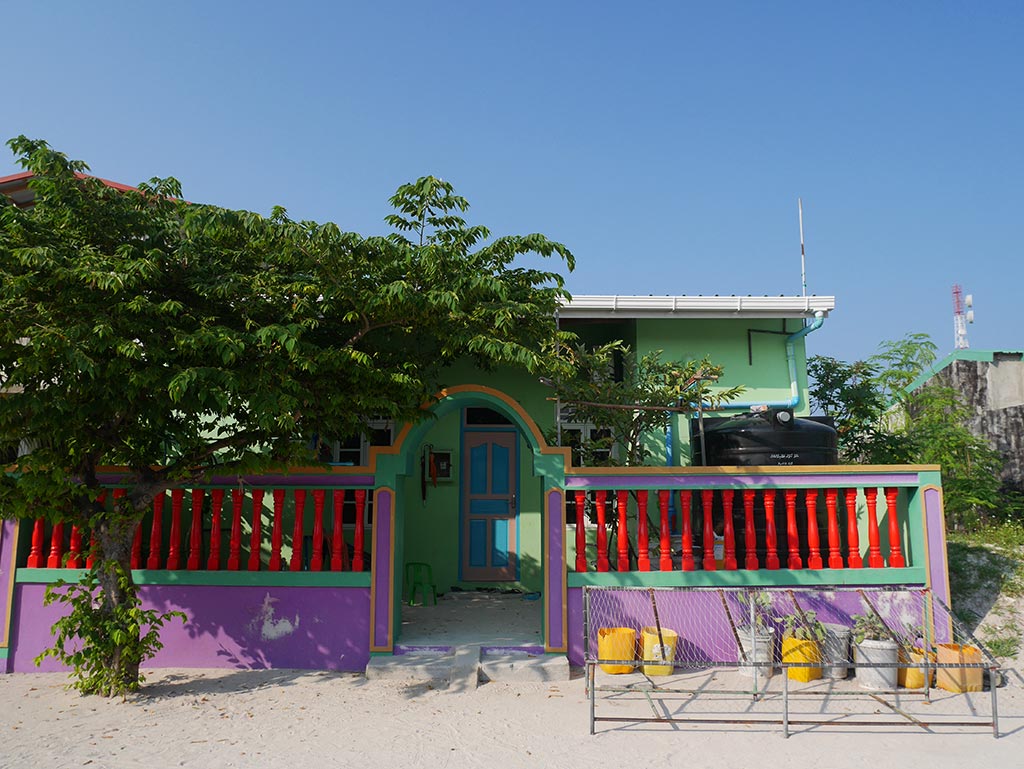 Only one of the many colorful houses around Gaafaru

Believe it or not, Maldives isn’t all blue and white. Nor is the overwater villa the prettiest building in the country.

Truth be told, I had zero ideas of what the local island architecture would look like, but I certainly didn’t expect it to be so colorful. 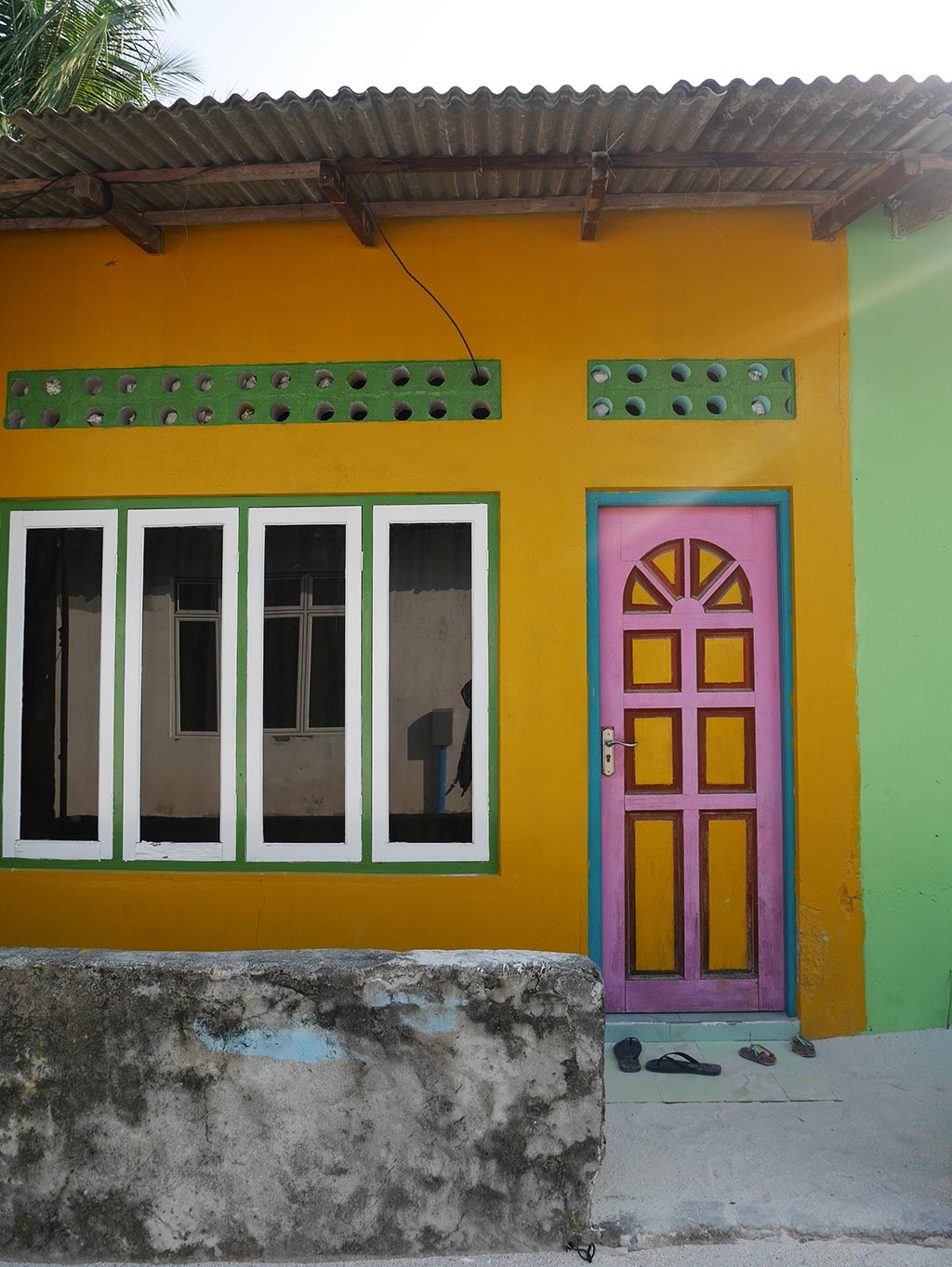 Freshly painted with vivid colors, the houses range from lilac to turquoise to orange, each with its own style and gorgeous window frames. 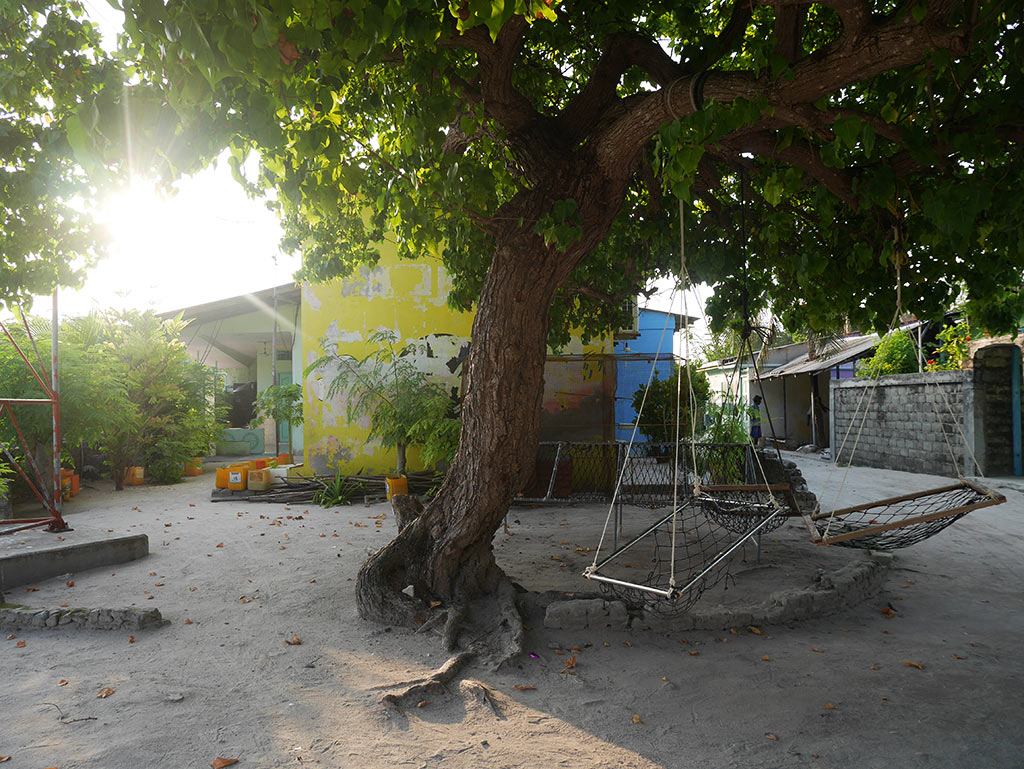 One of my most favorite things about the local islands are their Jorli. Jorli is the word for the netted, metal frame chairs that either form a row (Jorli fithi) or hang on a tree like a hammock. The Jorli fithi are sort of the equivalent to park bench, often found outside people’s home and in open spaces for people to sit and chat. They also double up as drying racks nicely. 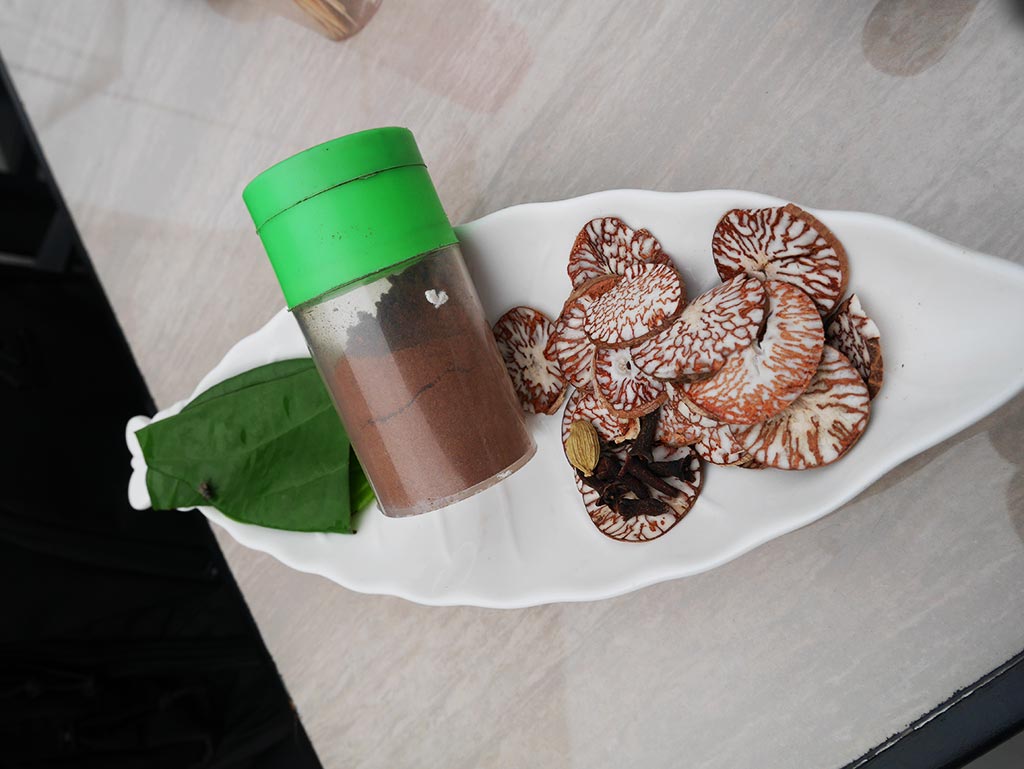 The ingredients for this “tray”

Analogous to the Indian Pann, I had never seen this interesting alternative to chewing gum before. Called “tray” in Maldivian (I failed to understand or write down its Maldivian pronunciation), it’s a quite common after meal addition. It involves rolling up a betel leave with areca nut, Hera Panna powder, clove, and cardamon inside and chewing it. You are supposed to eat it, but the areca nut has the consistency of wood so I ended up secretly spitting them back out… The taste wasn’t unpleasant, though it did feel like I was eating soap. However, it is extremely effective in cleansing the mouth odor. 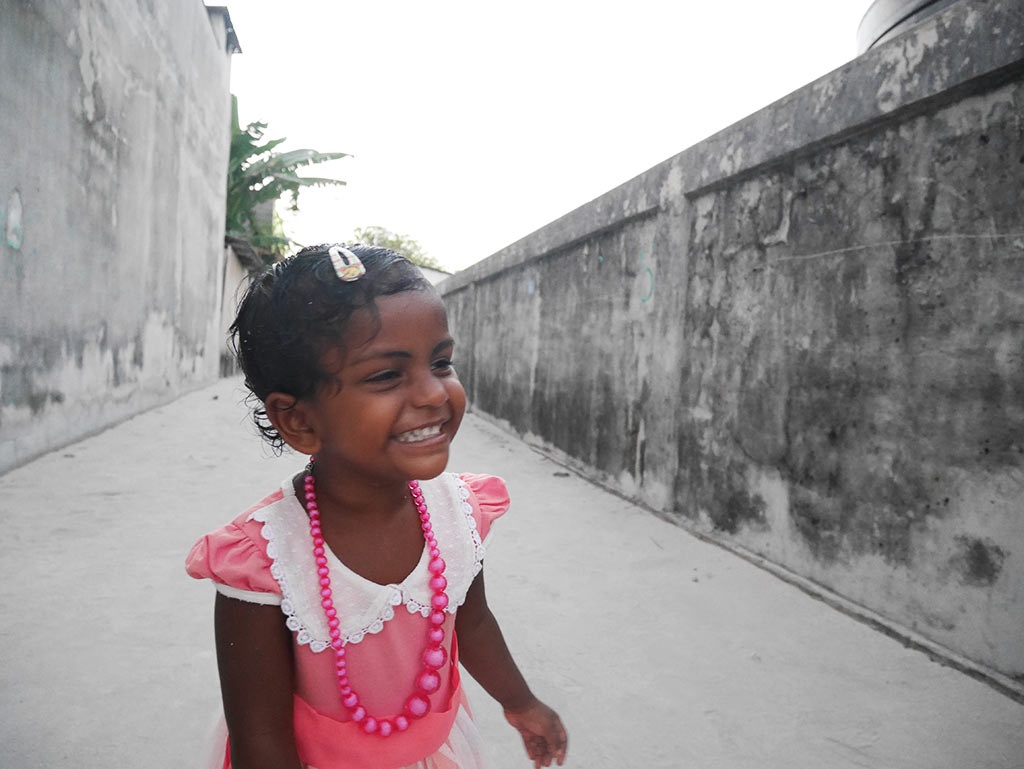 This lovely girl came up to say hi to me – twice!

Perhaps it was because I was one of the only few tourists on the island, but the local children love running up and saying hi to me whenever I walked around Gaafaru. A family had invited me to take a selfie together, a little girl had gifted me with handfuls of shells, and one toddler ran up to say hi to me twice as I walked down the street. Most of the locals are extremely friendly, pointing me back towards my hotel when I was lost.

In fact, I had never been to a place where I felt safer! Pin this article for later!