We headed off to Bangalore, or Bangaluru, the silicon valley of India, and the capital of the state Karnataka. Bangalore is the I.T. hub of India and many expats live here so there are a lot of “western” restaurants and shopping. Our mission was the NH7 music festival. We booked the tickets about 5 minutes after our friend, Nicki, told us she’d be there. I was excited to leave Goa, which is getting so crowded right now (and hot! isn’t is suppose to cool down soon?).  We were stoked to be on our way to Bangalore, the breezy comfortably warm city just an hours flight away. The ‘NH7 Weeekender Bangalore’ music festival is held here, among other cities, every year. We figured the festival would be packed, considering there are around 9 million people in this city, but something tried to ruin that first night… rain! We saw it as soon as we got our cab at the airport. Devastating. We danced through it the first night, and were rewarded the second with clear blue skies. 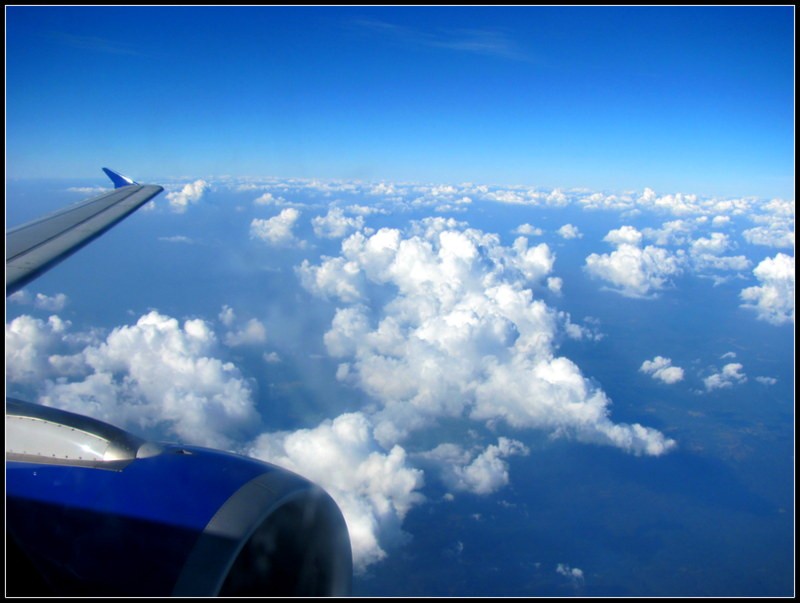 Flying into bangalore. It didn’t look like rain, but I’m not meteorologist.

Now for the logistics:

Where to Stay: The festival is closer to the airport than to the city. It is 40 km between the two. Plan the hotel you book accordingly. We knew we wouldn’t go out in town the two days of the festival, so we stayed near the airport. On day three, we shifted to a hotel in the center of the city so we could explore Bangalore. Of course hotels can boost tariff because of the influx of visitors, but luckily we still found rooms for about 4,000 rs a night. It’s better to use Make My Trip than the actual hotel’s website for a good deal. You should book ahead because everyone was completely filled up. We got lucky with our room- Soo lucky: we booked a suite at a hotel that was a probably a 2 star for only 3,000 bucks a night on Make My trip (which is an Indian booking company). They called us saying there was a mistake the room wasn’t available. They booked us one in a classy hotel that was 8,000 bucks per night on them! FYI I don’t always travel by plane or stay at nice hotels, this is a music festival extravaganza exception. 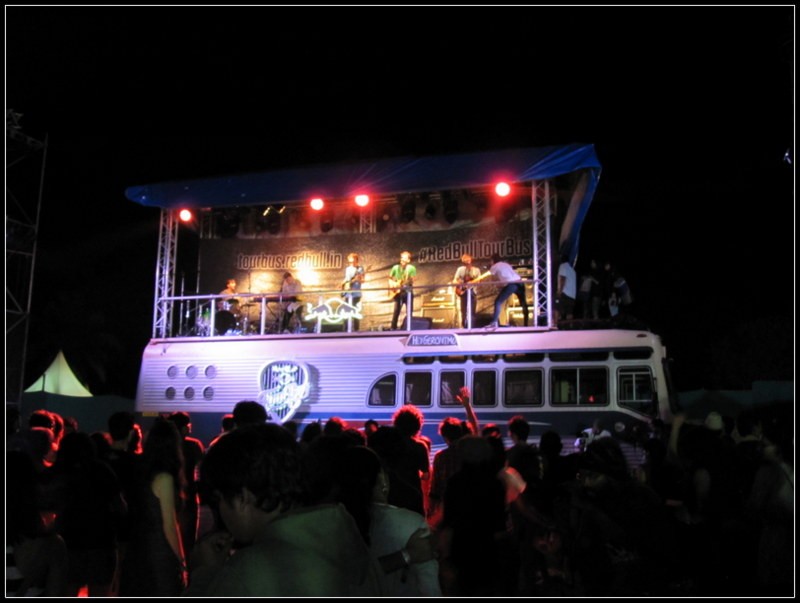 Time: 3 PM till 10 PM. The entire city shuts down at 10 because it’s a strict place, and the festival is no exception. After parties go on at hotels when the festival is over. The musicians stay at the same few hotels that the concertgoers do, so you’re likely to meet them.

Cost of tickets: 3,500 rs if you bought 2 days at once. You can buy these at the door or online. If you are going to hit up more than one festival (maybe you want to go to the one in Pune too) they offer special deals on that as well. Staff simply couldn’t sell us two days at once (I’m sure they could because the website and the sign said so), so we had to buy each ticket for 2,000 rs each day. Typical. Ben and I’s total ticket cost was 8,000 rs or about 180 USD.

Getting There & Away: You will have to hire a driver for the weekend. It won’t be cheap. Ours overcharged at about 5,000 rs for 2 full days. The festival is way out in the middle of nowhere; not only will you not find a cab, Mega and Meru cabs will tell you it’s a two hour wait. After the festival, there will be aout 10 rickshaws outside. So maybe 20 people will get lucky enough to go home. It’s best to actually prepare with a driver than wing it. Our friends got stuck out there. We got stuck at another hotel until 2 am and our driver was nice enough to wake up and collect us, or we wouldn’t have gotten home, so thank you Sayed! 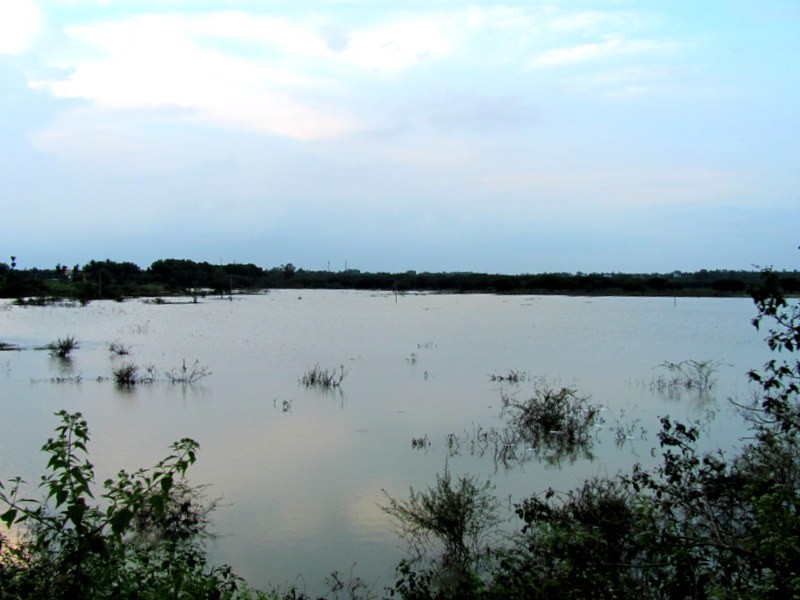 Driving into nowhere… we even passed a vineyard 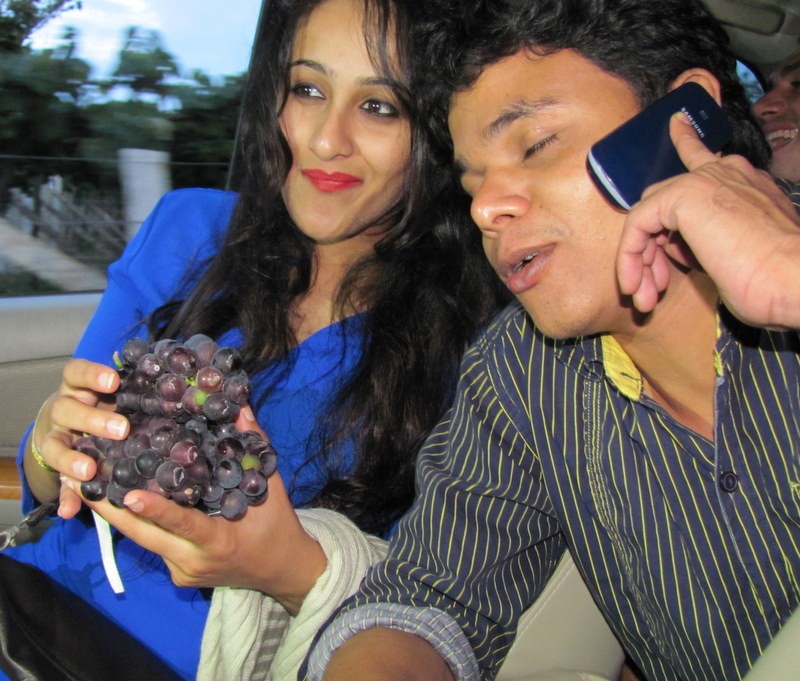 Drinks: The drinks were pretty pricey. You had to buy tokens that you could trade in for drinks. Each token was worth 50 rs and drinks were about 6-8 tokens. I think we spent as much on booze as the tickets cost. One major downside of the concert was NO BEER. Bacardi sponsored NH7 so you could have vodka, breezers, and rum. That’s just cruel. You’ll want to pregame! 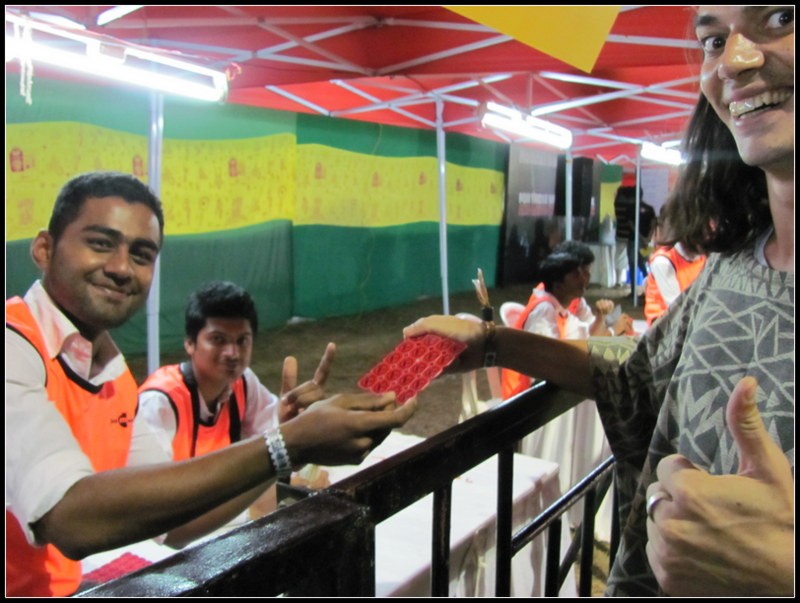 Food: Same as the drinks in regards to buying tokens. Everything was priced fair, at about 150 rs a dish. Options: Sbarro pizza, Hot Rocks BBQ, cotton candy, popcorn, cupcakes, wraps… you name it. There was a lot of variety. But really, Sbarro, no pizza sauce at all? Like you don’t even know what I’m talking about when I ask where’s the sauce!? Sadly, Indian Sbarro is not even close to the original. 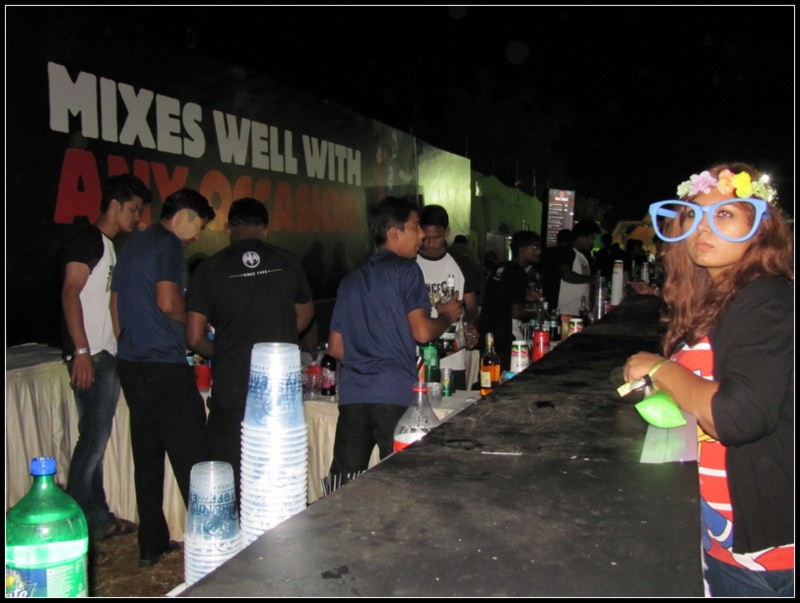 So is an Indian music festival like one in America? I’ve never been to the BIG ones in the states so this festival definitely was up to par. Ok, I’ve never been to really any festival now that I think about it. There was that one in Serbia… So this festival was really cool coming from someone who can make basically no knowledgeable comparison. There were 6 stages: Bacardi Arena, Red Bull Tour Bus (which actually had just stopped in Goa), The Dewarists, Eristoff Wolves Den, MTS Other Stage, and Breezer Dub Station. You reading this thinking, of course there was more than one stage- it’s a festival, not a concert. Good for you for being such a good festival go-er. Now I know.

So which stage did I love? The Red Bull one was pretty cool; they’ve been touring around India independently the last month or so. The Dub station was by far the most annoying of stations. At first, I thought it was awesome, plus I was drunk… but as the alcohol wore off it was still the same DJ playing songs that were so similar it was like a playlist on repeat. He kept yelling “Ba! Ba! Ba! Ba da ba!” really fast, like we might think he was saying actual words. I just don’t understand this electronic music; I don’t see the talent there. 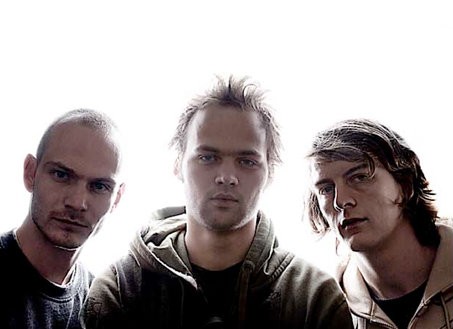 Most of the acts were electronic. In India, every club/concert I go to is trance/techno/psy or whatever other word you want to use for it. There was a time quite recently when people talked about psy music and I thought it was a Dj named ‘Sai’. I’m used to country music! Even little kids celebrating a holiday are listening to electro music. I don’t think I’ll ever get used to that; however this is the growing music scene with the younger generation, so I guess I should get used to it or develop a stronger taste for the hindi hits.

Much of the electro music at the festival wasn’t original; the DJ’s put his or her spin on a song someone else made. Like I said above, I just don’t see the talent there.  A couple acts were gorgeous, barely dressed, Indian girls bouncing around singing with little enough vocal skills that you can tell how they got famous (aka because men love them). At least they sang original songs though. There were a few rock bands from Australia, Sweden, etc that were pretty cool. Fortunately, there were some great Indian bands playing more traditional music as well. My favorite of the night was Raghu Dixit Project. They had backup dancers with giant lit-up headpieces, and throughout the crowd were dancers carrying giants on sticks. The band wore lungis which was awesome.

Overall, the festival wasn’t my kind of music, but it was still a lot of fun! Indians know how to party. Lots of people were tripping out for sure and drugs were being passed around like any festival but safety was no issue at all. People were dancing in the rain having a blast. You don’t see what you do in the U.S…. 20 year olds passed out on side of the road, or ambulances taking kids to the hospital with alcohol poisoning. After the exhausting couple days, we toured around Bangalore and got our fix of western food and shopping. Believe it or not, Indian cities are just as expensive as western ones… if you are living like a westerner aka not eating indian meals, etc.  The amount of money that was spent was pretty steep for music my boyfriend and I weren’t super fond of. I did however find Bangalore one of the nicest cities I’ve visited in India, and I’ll definitely be going back, although maybe not for the concert. 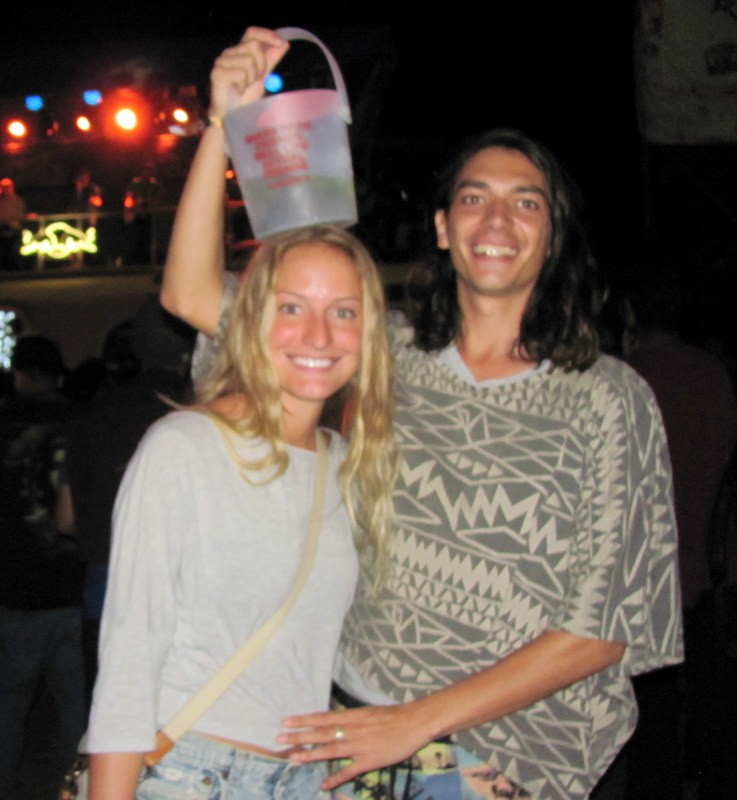 What’s the best music festival you’ve been to? This was my first big one!