Review of Offhotels | 5 Stars at a Bargain

Home » Blogging » Review of Offhotels | 5 Stars at a Bargain

As a frequent traveler, I’m sure you’re always looking for the best new ways to get cheaper hotel stays. Some booking engines are better than others, and some compare prices. The website offhotels does the budget hotel comparison and tells you if there are any additional promotion codes available. Once it searches the cheapest price and you click to book, it sends you over to that site to book. I guess it’s like the Skyscanner of hotels.

It’s pretty straight forward to use. I did some comparisons of hotels I frequent in India to test this out. As I hope you know by now, this blog offers advice and products that I actually believe in, so I would never want to steer you in the wrong direction. I had to do my research.

The first place I checked is one Ben frequents and I love in Mumbai called Sahara Star. Ignoring the economic suites rooms because I want a real room (although that’s great for the budget traveler), the best deal it claims to have found was from makemytrip, at 130 bucks. When I clicked over it came up even lower at 122, which was a nice surprise. 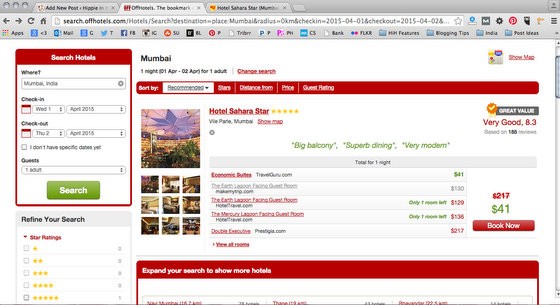 It’s updated daily, so I image makemytrip had just updated again. I checked makemytrip individually in another screen, searching the same date and room type and it was 122. So the rate was the lowest and equal to what makemytrip offered. Below is the makemytrip screenshot.

I think that the timing with updates will need to be done more often. Perhaps another had dropped even lower than 122, but it hadn’t been updated. The click-through price should be the same as what’s listed on offhotels. 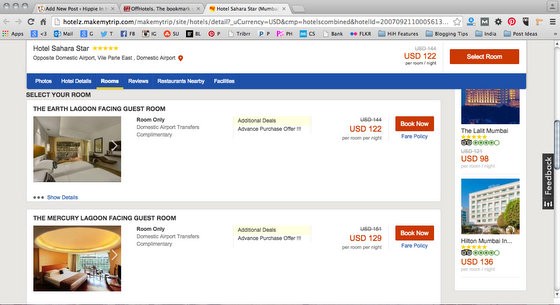 So, I tried another. I decided to search by destination and typed Delhi. The highest recommended had good reviews called Pearl Hotel. Offhotels found an Executive double for 30 bucks. I clicked to book and it took me to the website shoosh.com where it was listed as 30 dollars.

I haven’t heard of shoosh, so it’s not something I would have found on my own. 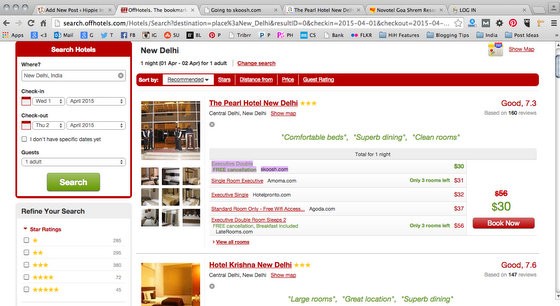 I went ahead and checked Agoda to find the Executive rooms started at 44 USD. That’s a pretty huge savings of 14 dollars. Imagine if you stayed for a week it would be 210 with offhotels compared to 308 with Agoda. It shows it’s always good to research other sites and not just go with the one well known for being cheap. 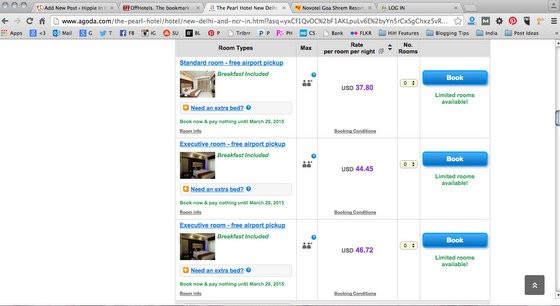 I went ahead and did a few more. I wanted to make sure that it was catching the lowest price and it seems to be doing so. As I mentioned sometimes when I click through to purchase I see the price is even lower, which is some kind of timing problem between the search engine with the updates, but I guess a cheaper room than expected is a good problem to have, unless you’re missing out on an even cheaper price.

I love checking out new sites like this when they first start because it’s good to be ahead of the game. One of the things I really like about offhotels is there is a face behind it, Stefan, and he also runs a website about visiting theme parks. You don’t get that personal touch much these days with booking sites.

You can see him in the little pop-up below. 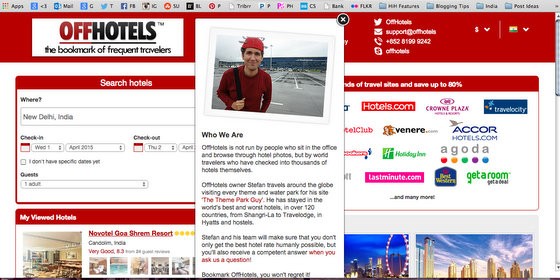 The other thing that I really like is that it sends you over to the website of the lowest price found so that if you’re in a rewards program or just like booking through certain sites, you still can. I guess it’s like having a travel agent of sorts. You can click on the discounts at the top and see a list of all the special offers of the booking sites.