I recently spent a couple weeks in Rajasthan and had the best time ever. I have a bunch of blog posts to share about it but while I was going through images there were a group of pictures that didn’t really fit into any blog post – they are all images of random stuff I saw while in the car!

I can’t sleep well on car rides in India unless it’s my Goan driver that I trust because the roads are insane so I’m always looking out at what is going on. I mean, you could be cruising along the highway and see a camel or have a bull run full speed at your car! It’s always something nuts.

At one point, we were driving the wrong way down a highway for 2 and a half minutes – I filmed the whole thing. The driver was taking a shortcut and we were in the fast lane of a highway (on the wrong side, divided by concrete) and cars, semi-trucks, and everything else had to get over in the nick of time.

I thought I’d share some photos of the road trip! 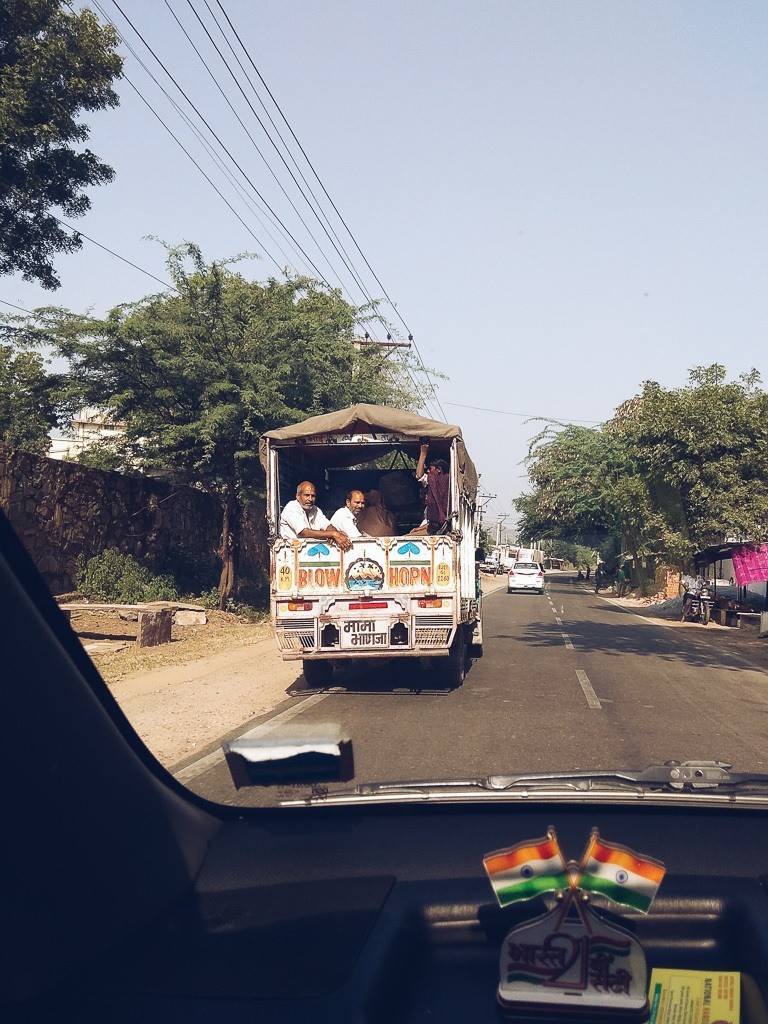 So this is just the most typical thing ever which you will see all day every day in India: people riding in the back of cars or hanging off of them or 10 people crammed inside sleeping.  When they are in front of you and you’re clearly a tourist (especially in villages) people will wave and say hi. 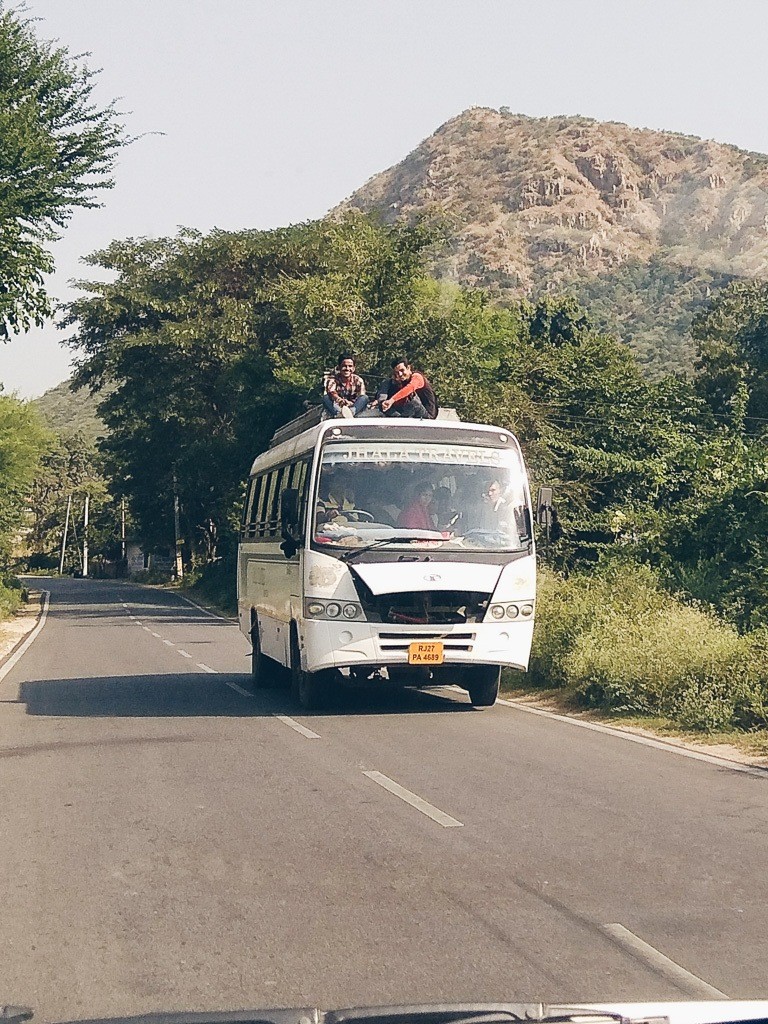 Two things in this picture… one there are people on the roof which is also pretty standard and not that weird. This bus was going really fast! But the second thing is that that front bit of metal on the car is open – they do this so it doesn’t overheat. It was over 100 degrees there at this time. 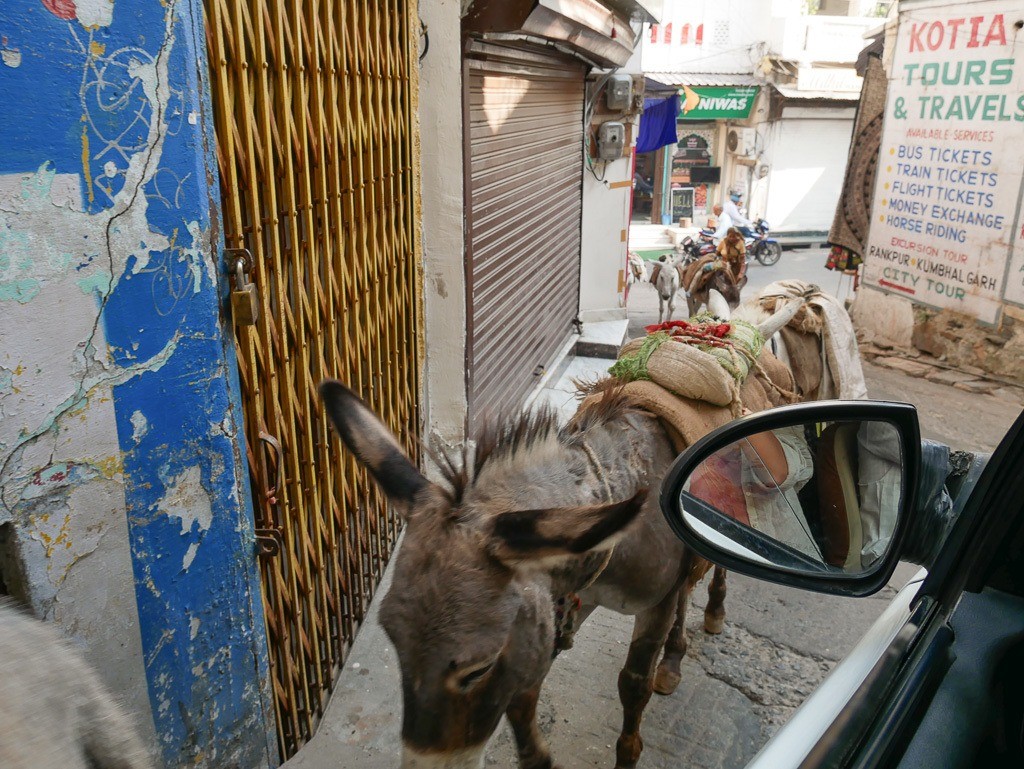 Literally, so many donkeys in Jodhpur to share the roads with. Horses, too!

I don’t mind this at all as it’s the way they have lived life forever so I know some people will call out “animal abuse” but these are working donkeys and India isn’t the USA so you’ll just have to accept this is their way of life :) 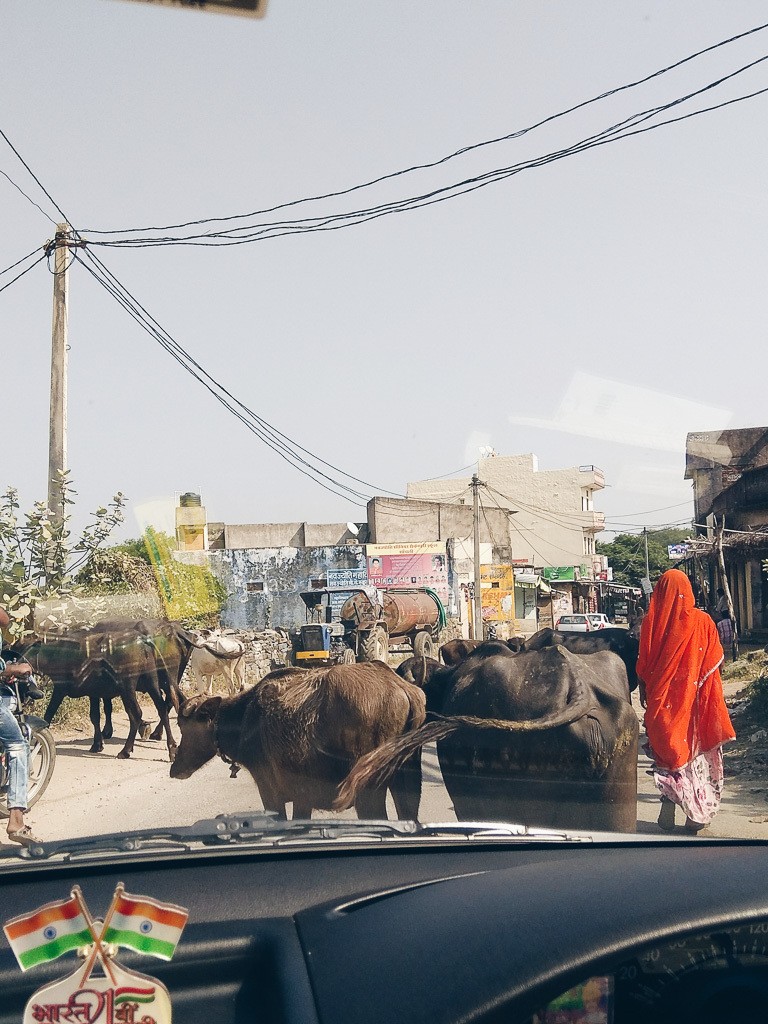 Traffic rarely stops in India because your driver will actually drive OFF the road to the left or right, wherever there is space, to go around roadblocks. Driving here is a game and the faster you go the more you win. The only time you really have to come to a stop is when there is a heard of animals in the way like those cows above which were getting out of hand and the lady ended up chasing them!

Or when there are some grazing goats wandering around: 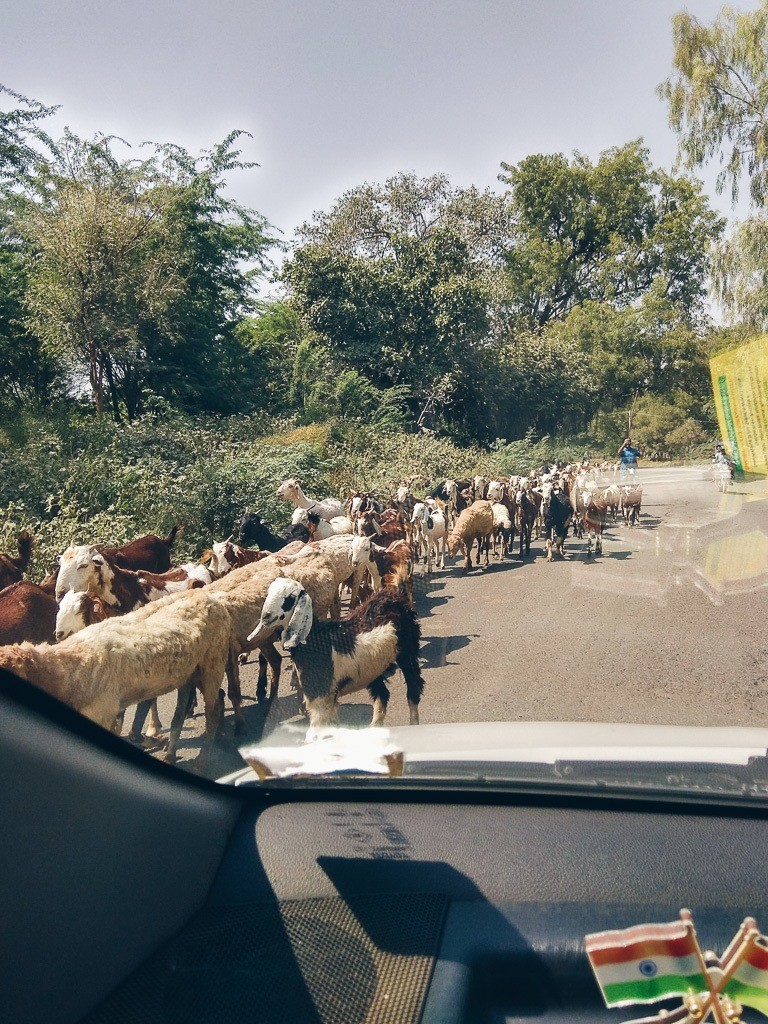 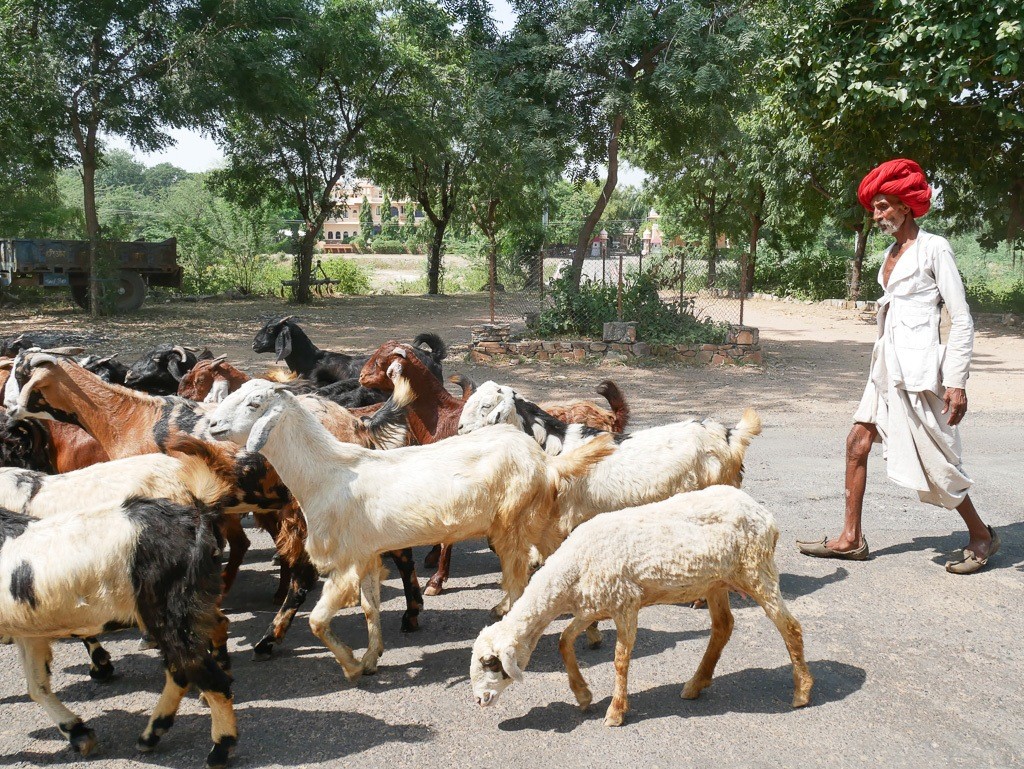 There are more crazy things that happen driving, but I am slow with my phone camera, haha which these are all taken on, and would sometimes miss a crazy moment and think “shoot, I should have taken a photo of that!” but people here drive fast and stuff goes by in the blink of an eye.

…of my driver’s nails. 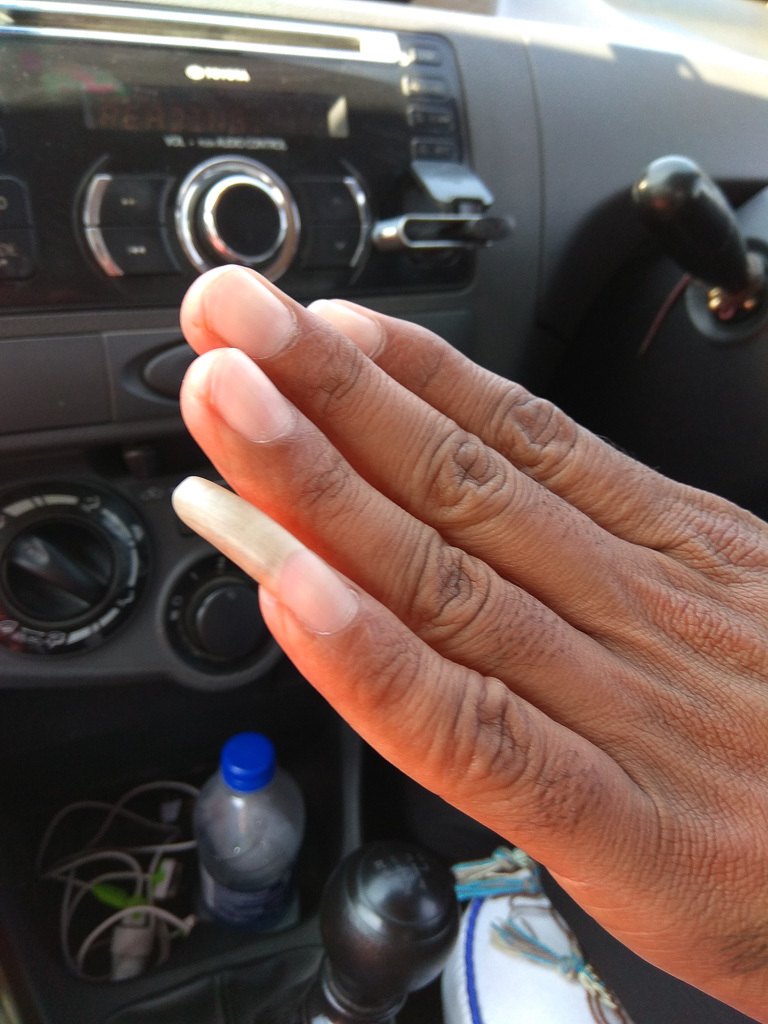 You’ll find in some parts of North India (and outside India too) that men keep their pinky fingernails long. I asked the driver why and he said to clean his ears, then he showed me. Other people have told me it’s a sign that they don’t have to do manual labor. But, he did say he’s been growing it since he was one but that it breaks sometimes.