Let me start with the fact that I feel like this story is pretty boring, but in my reader survey you guys were all saying you want more stories from India and that find even what has become mundane to me, a little interesting.

Living here as an expat comes with challenges and there are small things that remind you YOU’RE IN INDIA, not the USA and that often comes along during times you are dealing with sometimes customer service and things that involved paperwork (banking, etc).

As a blogger, I sometimes have items sent to me in India to try out, review, or wear on Instagram. I tell brands to send what they want but that I only promote it if I actually like it. I also tell them if they use the regular post, it might not show up. When items come into India, they then use tracked services like DHL and FedEx and usually send it “express” which costs a FORTUNE to make sure it actually arrives.

I deal with this importing packages a lot, and it’s always as annoying as this story is – but since this happened this week, I thought I’d tell you about it.

Getting items through customs and delivered is basically a battle. I do it at least once a month and it’s the worst. So, here’s how it goes down.

You have something sent to India with FedEx (let’s say), then once it reaches Mumbai, FedEx calls you to say it’s in customs and you need to submit “KYC” docs to clear it. So, you email them, the package clears, and it comes to your doorstep where you pay a customs fee in cash.

So, I knew I had a package coming which was sent from California. It arrived the next day in Mumbai.

But, I never got a phone call. So, I asked the company sending something for the tracking number, they replied with the number and said FedEx had called them two days prior asking for my phone number, which the company gave them. The package had been sitting in customs in Mumbai for days. I called up FedEx India who said they didn’t call me because they didn’t have my number – I told them that they did because they called specifically to requests it from the sender. They said, “Oh yes, I do see we have it…”

Okay, so not a huge deal. Realistically when you pay hundreds of dollars in shipping costs for express shipping, they should probably be on top of telling you when it’s reached customs and you need to take further steps.

So, the next step is to send KYC docs. These mean “Know Your Customer”. I have done this so many times, yet there are always issues with my documents. Years ago, I sent them in my name but I needed to show a lease with my name on it and couldn’t so the package was “auctioned off” in Mumbai. Another package was already coming with the same scenario but this time with a letter from “Ben my husband allowing me to accept a package in his home” (could only be permitted from a husband or father) which had to be NOTARIZED I was allowed to the package.

I learned from that and started putting Ben’s name since his name is on the lease. Well, Ben is not the same as Benjamin, so that next package was declined. So, I have to submit Ben’s passport, driver’s license, visa, photo ID, and lease.

After a couple days of back and forths and a letter to the customs agents, my KYC docs were accepted.

The FedEx tracking said the package would arrive the following day, after all, I’m only a 45-minute flight from Mumbai.

Two days later, no package and I called on a Friday saying “what’s going on, when is the package coming?”. They said 1000% it will come on Monday, madam, as they are closed on the weekends.

Monday nothing. Tuesday nothing. I called Tuesday to the Panjim, Goa office where the package had been sitting for two days asking why they didn’t bring it. They explained what should have been obvious to me:

They start work at 11 am, they have to stop at all the places before my house which is an hour away. They have lunch from 1-3PM. Work ends at 8 PM. They don’t have time to make it as far as my house because every day there are more packages to take which are closer to their office before they reach my house.

I asked: “but my package is express – doesn’t that take priority?” They said they just did things this way and no priority ones didn’t matter because how could they get the truck to me faster?

I was told maybe Friday they could bring it but it wasn’t guaranteed (and I was headed to Mexico) so they said it’s best I come to the office and pick up the parcel. 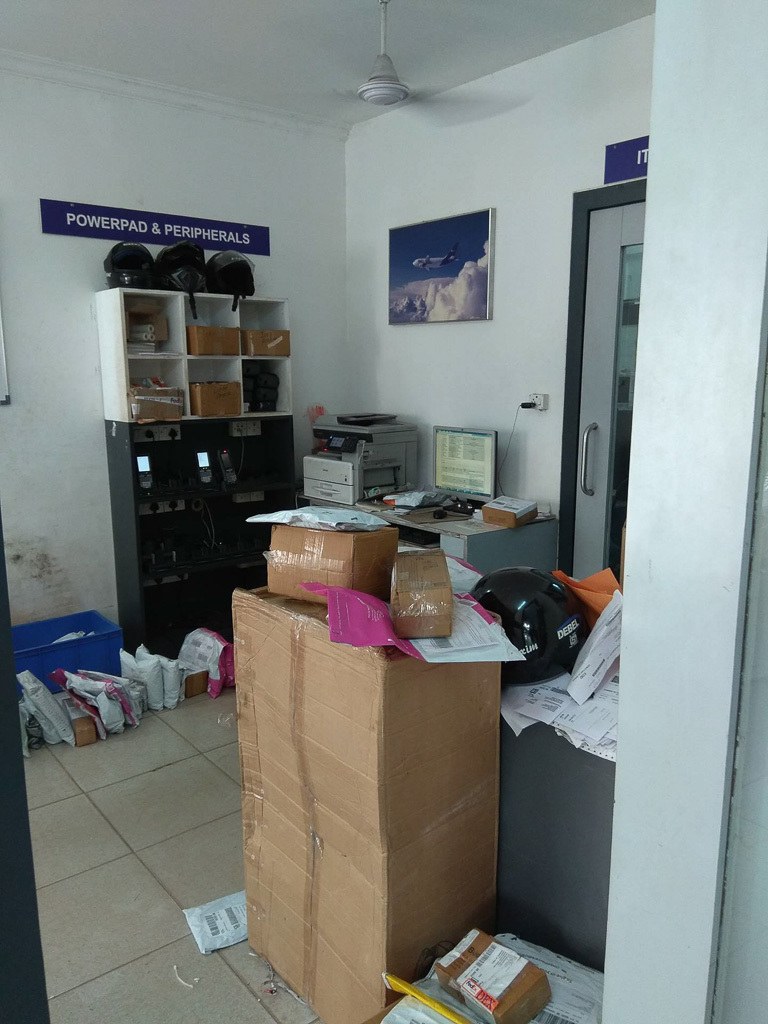 I had to drive almost an hour to the capital to pick it up in person and pay the customs fee. So, hundreds of dollars in express shipping and you get to pick it up yourself.

This has happened before when a package took two weeks to arrive from Panjim (also express) because they didn’t have enough people to deliver to my area of Goa.

Basically, this is just a small thing – getting a package isn’t a huge deal. But imagine this is how most offices are run… from the internet people to the gas and water company making paying bills a lot of fun!