I’ll just tell you right away I’m not going to tell you the whole story, but I will link an article here in case you want to read more about this incident. Yes, it’s the daily mail but it tells a decent story.

So, there are a few different mafias in Goa. Sounds nuts, but it’s absolutely true and everyone who lives in Goa knows which nationalities make up Mafia groups. It’s a bit of a touchy subject, so that’s why I’m not saying too much- but this was a huge event that shook me last year, and I wanted to share that on here.

In Parra one day, the village next to ours, a Nigerian man was brutally murdered by a group of boys/gangsters. It had to do with drug deals, that much was certain as that’s what all the mafia dudes fight about. There were issues with the cops possibly not dealing with the body and murder appropriately and a MASSIVE riot broke out. The Nigerians beat in the windows of the cop car with the body and grabbed it back out into the middle of the road. I think I remember the news saying over 200 Nigerians came to the scene in the next hour.

Live on TV we could see: Nigeria Riot in Goa. They blocked the street, had the dead body in the road, while locals and Nigerians fought. The Indian guy in charge (police person) said something dumb like “they are Goliath and we are David, the Nigerians are too big so we can’t help” while they let the huge mob of local dudes beat the group of pissed off Nigerians (some really really badly).

The locals were mad because Nigerians were bringing drugs and violence to them, and the Nigerians were mad thinking the police were on the locals side. It was a mess to say that least and absolutely is a story to read in the link above. There’s a lot more to it but I don’t really feel comfortable talking about it on here, so it’s better you read it!

What really shook me was that whether or not the Nigerian guys were really here on school visas, or if they were selling- they had been grouped into a “bad drug dealers” group and suddenly people jumped on this racist bandwagon. Trust me, I understand the locals side of view, but there were signs up at bike shops, restaurants, and bars saying:

“No Nigerians allowed, No Drugs” 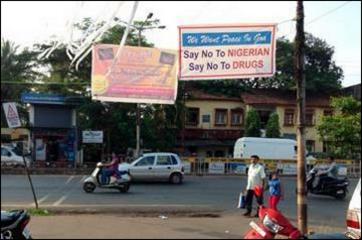 Places weren’t rented bikes to Nigerian people. They were afraid to come out because they didn’t want trouble. It really hit hard because it reminded me of how little control the law has in India in moments of violence and in dangerous situations. Luckily, tensions are down, but even in a place like Goa- nothing is perfect under the screen of “paradise”.

Did you enjoy this post? Let me know in the comments or by sharing it with the social media links! I’d love to keep giving you travel tricks & tips so feel free to subscribe by e-mail in the big purple box below. Don’t forget you can follow me on facebook, twitter, instagram & bloglovin’.