Maybe you’ve heard of the caste system in India. If not, you can read up here as it’s quite a lot to explain. If you read books about Indian culture, you may find that in the older days, the caste system was really harsh and there wasn’t much pity for those born in a lower caste.

It’s meant to be “in the past” and not followed like that today. In fact, some Indians may tell you it doesn’t exist anymore, as some have told me. Others will say it does, but it’s not talked about.

I have read about what it used to be like and have had friends some South India explain how it affects them, but I’m not sure how lower castes really have it in India. I don’t know if they are still treated terribly by higher castes… I hope not! (if you want to read a book that talks about it, try God of Small Things it’s really popular and touches on the caste system in Kerala)

There was a group called “untouchables” and in the book I just mentioned, I read that in the 70’s, the family wouldn’t let the “untouchable” walk in their house without walking backwards… and other mean things.

“Since 1950, the country has enacted many laws and social initiatives to protect and improve the socioeconomic conditions of its lower caste population. These caste classifications for college admission quotas, job reservations and other affirmative action initiatives, according to the Supreme Court of India, are based on heredity and are not changeable.. Discrimination against lower castes is illegal in India under Article 15 of its constitution, and India tracks violence against Dalits (untouchables) nationwide.”

I’ve also had friends explain that they have to marry someone from the same caste or maybe higher.

From what I know, Indians are meant to disclose their caste when applying for jobs and college… although its said that is so they are not discriminated against – which sounds similar to affirmative action which is something we have in the US.

There was outrage a month ago when this article came out from Times of India: Four Degrees in Hand and He Still Cleans Mumbai’s Sewers. Take a second to read it.

There are articles like this often though, and caste is sometimes even an issue when you try to get an apartment. A girl in Goa posted this, a photo she took of the newspaper with her phone: 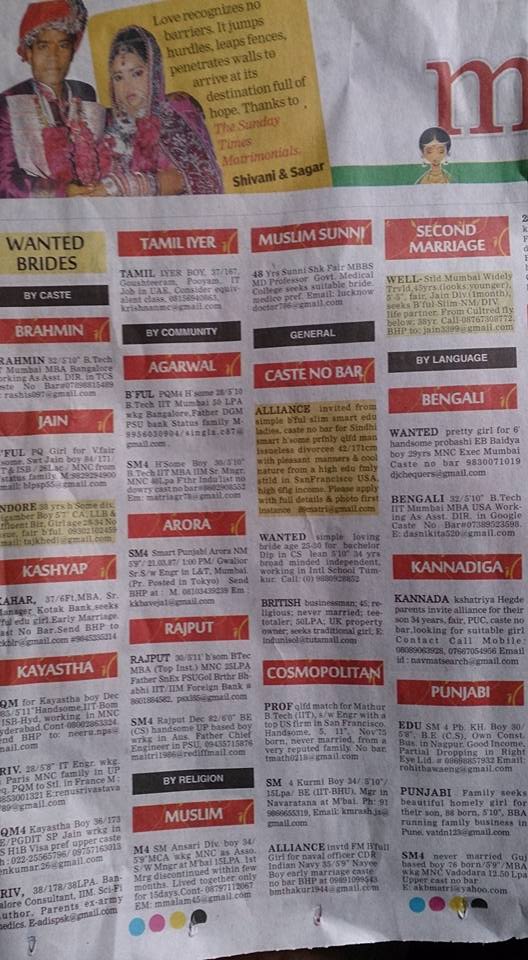 So, they aren’t exactly pretending the caste system doesn’t exist. Which makes it all very confusing!

What do you think of this? Any Indian readers want to shed some wisdom?