We stopped along our way to Itanigar at a house that is well known for being this long house with 4 kitchens for this man’s FOUR wives. It’s interesting for sure to see that way of life, and our guide from Holiday Scout took us to the house.

Unfortunately it was locked, and no one was home. This man’s pets however were home. We started to play with the little puppies, who were happily chilling out with the chicken, sheep and goats in the yard. 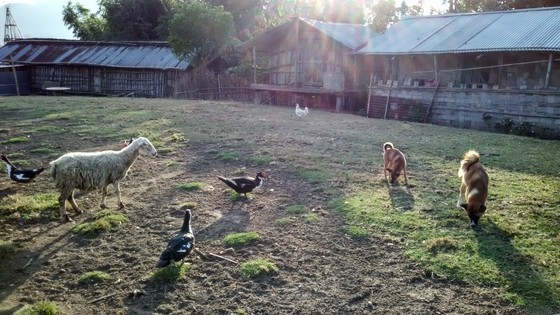 We noticed one of the dogs, the cutest one, was injured and looked pretty skinny. Sange had biscuits in the car so we started to feed them.  A man came over and Sange asked what happened to the injured dog and he said it was hit by a car. In these instances, this is “village life” and it’s sad (I LOVE dogs) but understandable that when people don’t have enough money for themselves, they don’t have money to take animals to vets that could be 50 km away from their home. I asked if I gave money to them to get the dog help, would they- and it was clear that they money would not go to the dog. The dog had to heal on it’s own. I asked if they got fed and it was reported that they eat what tourists give them and any leftover food. Again, it’s sad but this is rural India and it’s not actually as shocking anymore. The next bit was. 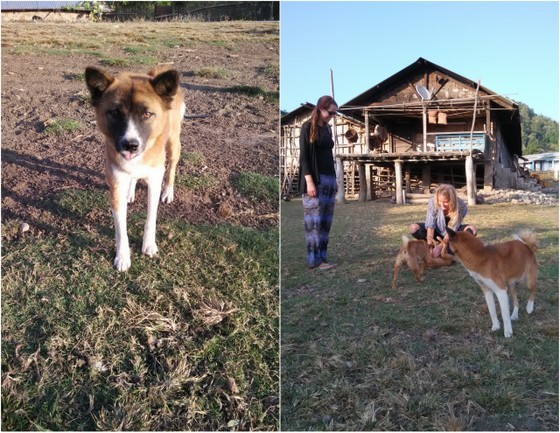 this dog on the left was injured, and couldn’t fight the other dogs for food. 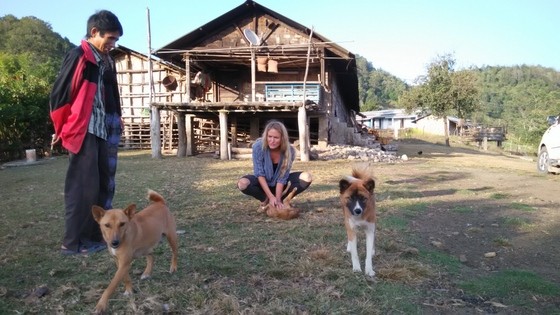 While we were playing three little boys from this village came to see what was happening. they walked up pretty close to us, giggling, seeming quite adorable. Then, one boy RAN at the injured dog full speed and kicked it. I shrieked saying NO! what are you doing! and they laughed… running in circles, coming back for more. The boys kicked at the other small dogs and threw rocks. I sort of grabbed one by the arm (really lightly just to stop him) and was telling him ‘don’t do that’. Sange was upset telling them in their language to stop, that it wasn’t right. They were only 4 or 5 years old I’d guess. So, who taught them to hurt innocent animals?

It didn’t stop and I stood near the injured dog, ready to block out a four year old if necessary… I know it sounds crazy but I just started crying. These little shits (I know, you shouldn’t call children little shits….) were having the best fun hurting these dogs. It was so uncivilized and effed up. The mom came to watch over the fence and I wanted to tell her off, but what would I accomplish? Then, Anna went toward the fence to take a photo of sunset and the boys threw sticks and rocks at her! She threw a stick right back (not hitting them just to make them go away) and they laughed and laughed.

It was seriously depressing and after I stopped crying (I mean, I wasn’t sobbing, I was just upset), I told Sange let’s go. There’s no way to fix a problem like this. Perhaps the people have so little food, they don’t want the dogs getting food. Perhaps they just hate dogs… I don’t know but I was angry. If I were a kid and kicked an injured dog, I’d have been spanked and grounded and told what a little shit I was for sure!

In the US, a kid who hurts animals for fun, is seen as a future sociopath… On the TV show Criminal Minds, they do these flashbacks where the serial killer is torturing a cute bunny or something and I think okay these kids can’t ALL be sociopaths, but what is going on here?

It’s not the first time I’ve seen a kid hurt an animal in India but this one just got to me. Luckily, Anna and Sange didn’t think I was crazy for crying, they were sad too. Sad it happened, and sad to leave the animals near this. But, if those dogs were hurt that badly, I suppose they would leave (and they don’t; they live here) or they would bite humans who came close.

What do you think? 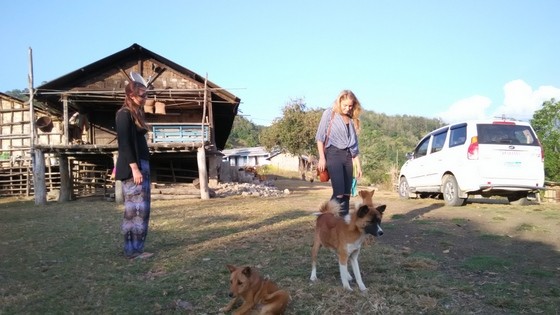