This is India! (six)

Did you know anything is possible in India?

Sometimes when you think the objective is impossible, especially in the chaos of India, you get a big surprise.

I spent a lot of time in airports which sucks because they are my least favorite place. I don’t even like airplanes. Trains, buses, and cars are better. Yaks, camels, and elephants are better.

What’s worse than the aiports in India are the long-ass lines at customs. Now, I should explain that Indian customs officials are very thourough…

It was a crowded day in the old Bombay international airport. The customs line was longer than usual; way out into the main walkways. 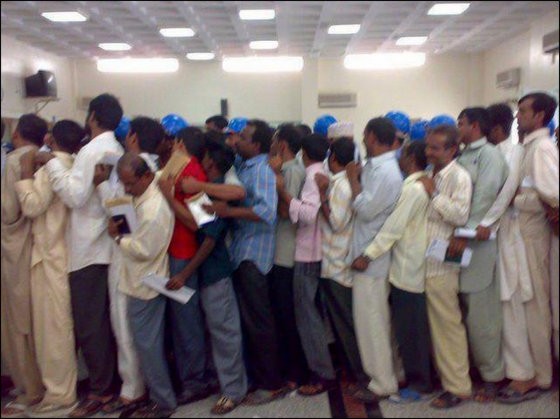 There were at least 10 booths open and it seemed to be going pretty fast, until…

One guy didn’t have the right paperwork. He was in the fast line for business people/rich people (someone tell me how to get in this line!). The customs official was all, “you shall not pass!” He was right, of course, if the guy didn’t have what he needed.

The problem that arises is “rubber-necking”. When someone has a car crash, lots of people want to not just STOP, but pull over, get involved, and argue over who’s fault it was while causing a huge traffic jam. All in a days work. 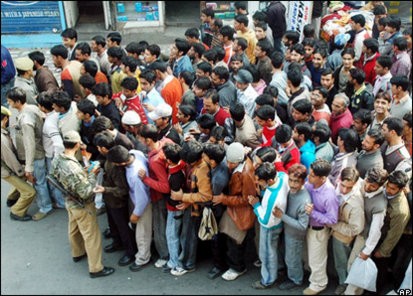 Because of the angry passenger yelling, which is more typical than you’d think in an Indian customs line, the official in the booth Ben and I were in line for stepped over to see what the problem was.

That made the guy 3 booths down curious. He then left his position to see what the fuss was.

Booths 4 and 5 started feeling left out so those officials skipped on over to add their two cents.

Now, there are 10 officials in 1 booth which is held up because the man doesn’t have his paperwork. 1,000 people are just standing there watching, not moving.

An Indian man in the initial line starts to yell, “You embarrass India! This is why people say India is bad! Look how dumb you are all standing here so NO ONE can get through!”

Well the Indian people in line started to yell at him for being so anti-Indian. Then they start yelling really freakin’ loud. There were at least 30 men trying to yell louder than the others.

I cannot explain in words the chaos that ensued. I’m pretty sure in the U.S. someone would be tasered (okay, not tasered, but something!).

Ben and I just stood there, staying quiet, but sort of laughing to ourselves until finally the customs officials all determined the man didn’t have his paperwork. They sent him away and all went back to their booths.