My Handful of Tips for Visiting Helsinki

Helsinki is easy to get around and not somewhere that’s difficult to travel, like most European cities. But its way up North so people get nervous! Here’s a little intro to Helsinki to help you get ready for your trip. This is titled my “handful of tips for visiting Helsinki” instead of a guide to Helsinki for a reason. I was only there for a week, so I didn’t really get to see everything there is to see. I will share everything I know, though! 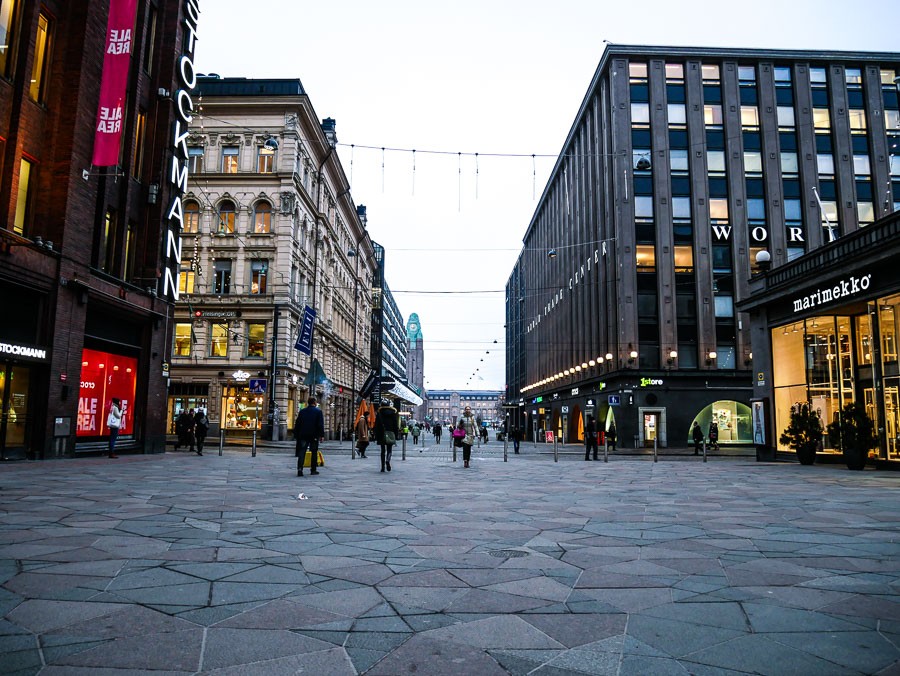 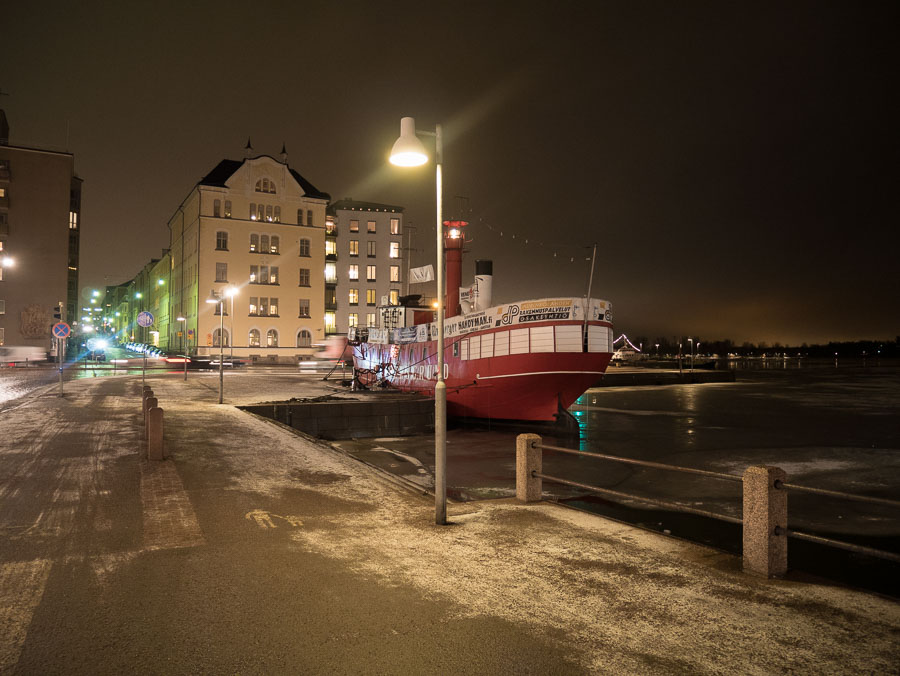 Finnish people come off a little shy and maybe more like introverts as they often joke about. But, unlike other places in Europe where they do double cheek kisses, they mostly offered me huge hugs! 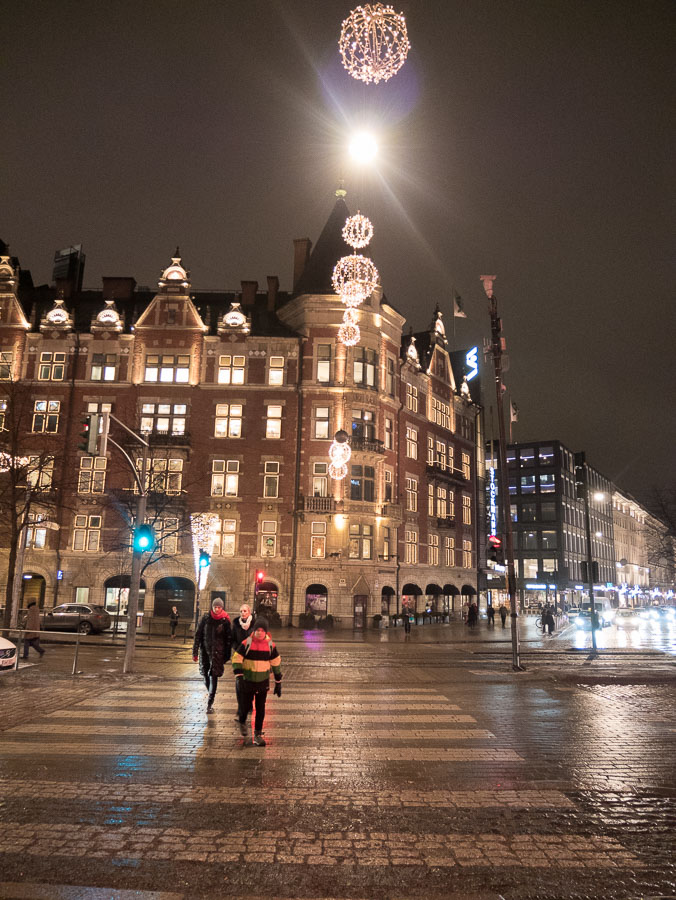 Helsinki, to me, had a very hipster vibe. It is hard to sight-see and have the energy to go out because it was only sunny like 4-5 hours of the day.

When people visit Finland they go for Helsinki, the North (Lapland), the Lake region (Turku), and the

Places for tourists to see in Helsinki

I feel like in Helsinki its more about just experiencing life rather than seeing landmarks, but there are some places you might want to check out.

Helsinki Cathedral – It seems like this is the biggest attraction. It is pretty impressive but I only saw it in the dark. 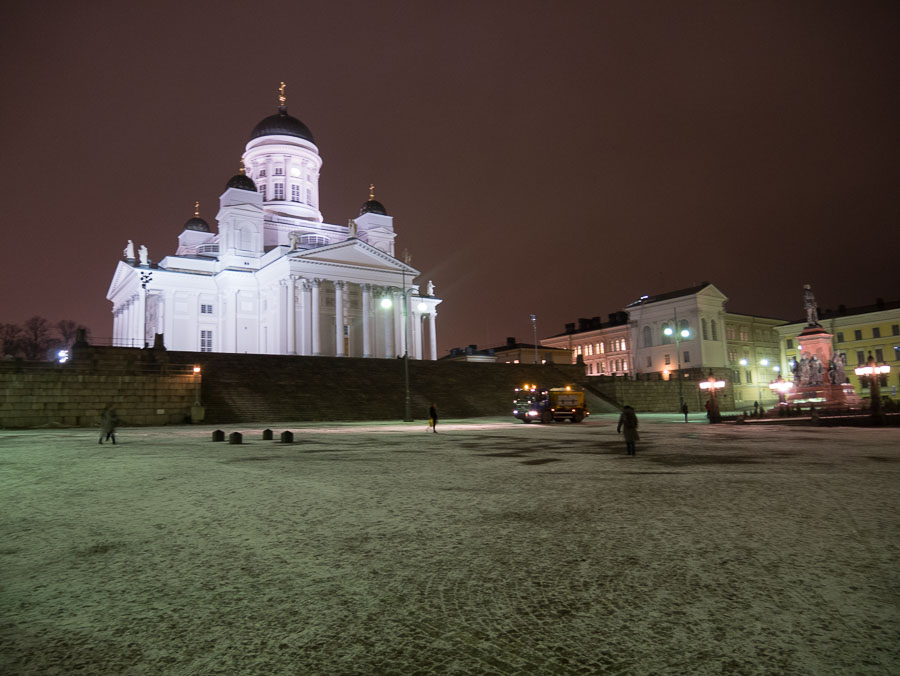 In the Sokos Hotel on the 10th floor is a restaurant called Loiste. A local told me it had the best viewpoint and she was right! 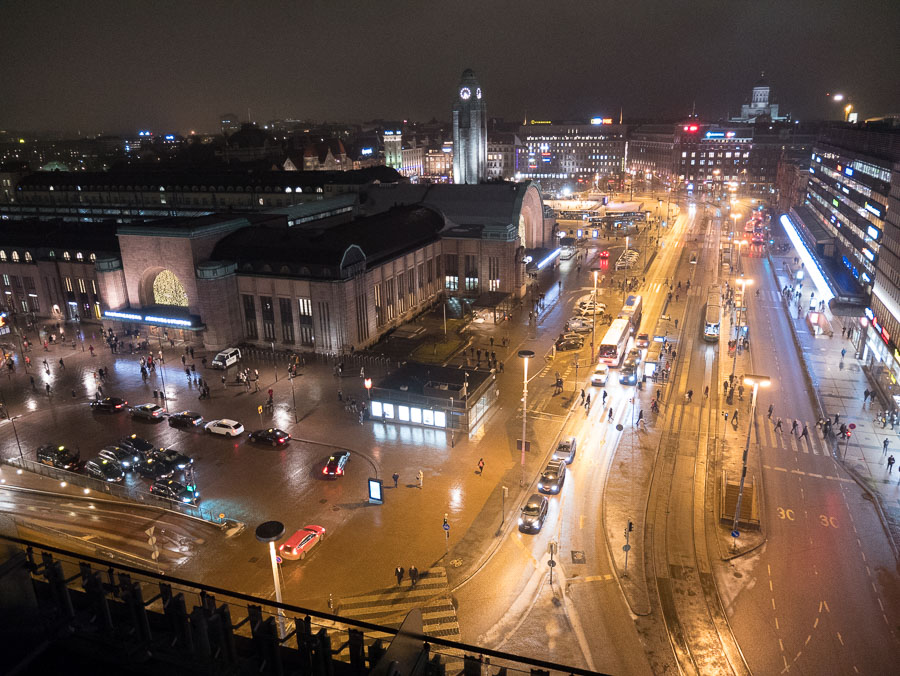 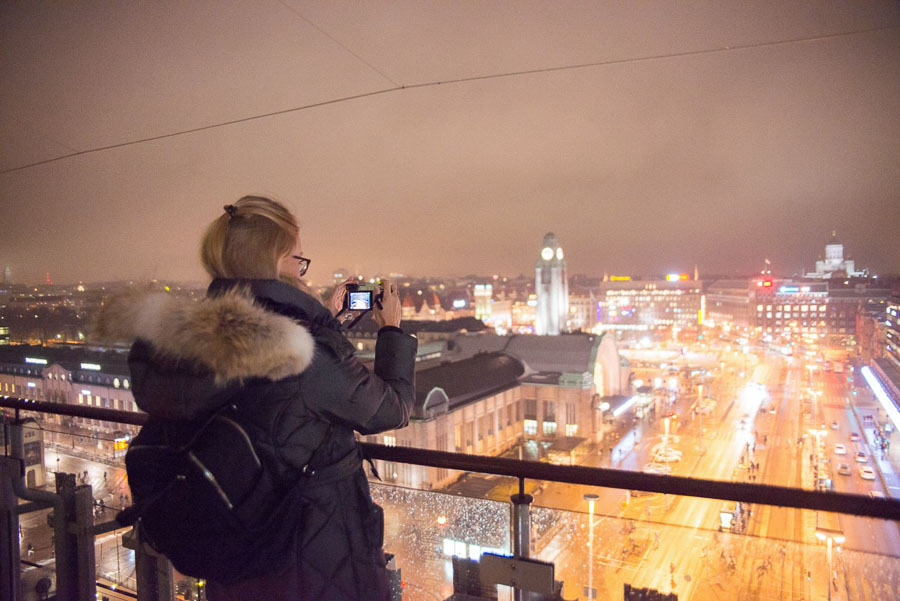 Visit a sauna! You HAVE to do this in Finland because they invented them and it’s a serious part of their lives (seriously… they are mad about them). There is a huge modern public sauna called Loyly that we went to. You eat dinner, sauna, jump in an ice lake, and drink.

If you walk to Aleksanterinkatu Road, you’ll see the Christmas lights while you do some shopping. It’s great! 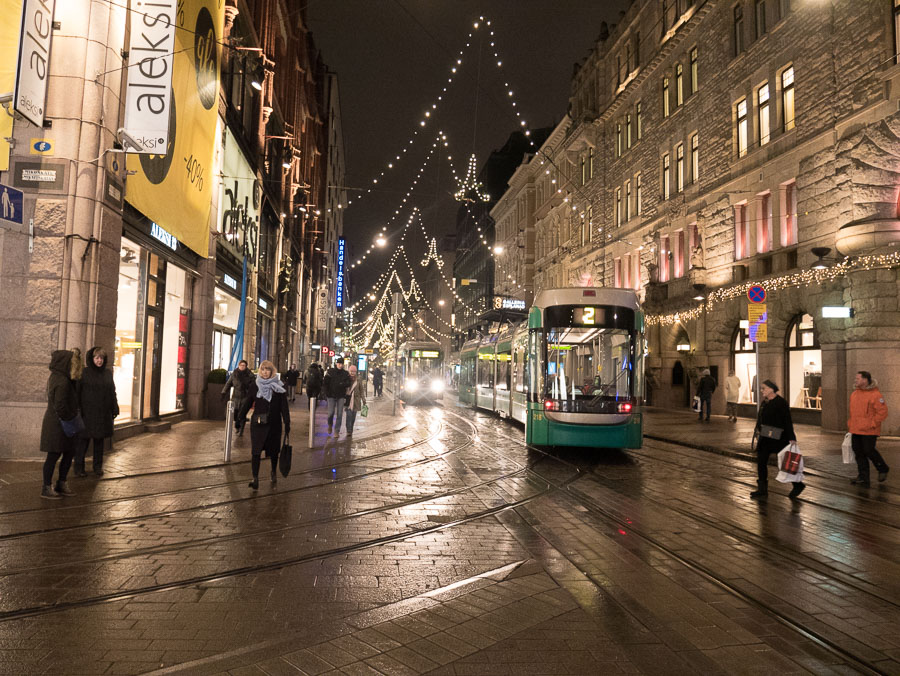 You can also check out the Ateneum Art Museum, Kamppi Chapel of Silence which is a gathering place, Old Market Hall to see the local produce and seafood, and visit the Suomenlinna Sea Fortress (UNESCO site) which I saw other bloggers do and their photos were amazing.

There is SO much to see outside of the city center and I highly recommend you focus on that rather than being in Helsinki all the time. There are SO many day trips and you can see them all in the Finnair stopover program as it’s their focus. I got to do two as part of the Nordic Bloggers Experience and I’ll be writing about that in two separate upcoming posts: Vantaa & Piece of Forest.

Here is a list of the day trips that you can take outside of Helsinki. 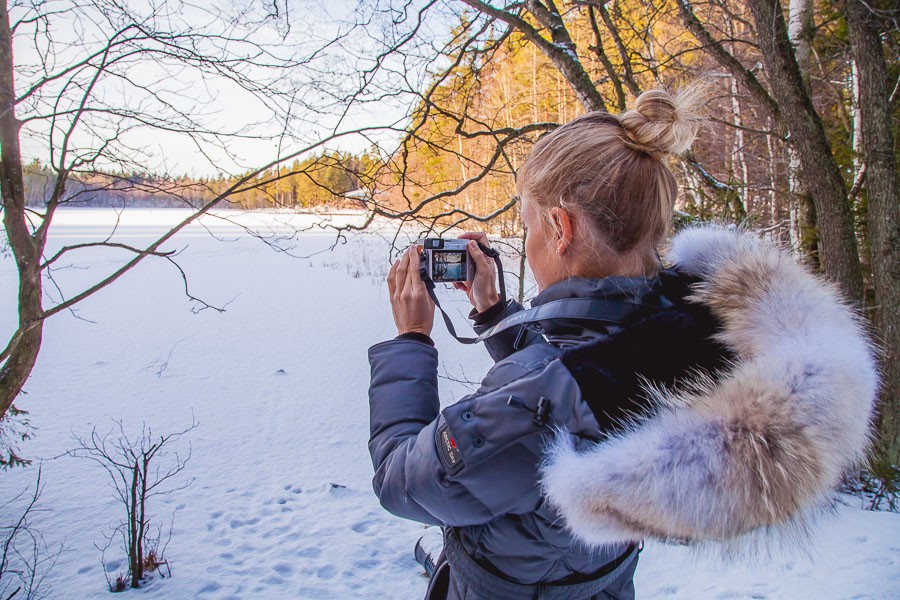 I found that food here reminded me of the freshness of Latvia. Breakfasts were yogurt, rye breads, muesli, berries, and fruit. Meals consisted often times of reindeer, salmon, and potatoes. On Finnair they offer blueberry juice and they even put blueberry flavour into their tea.

Finns are OBSESSED with coffee. It’s a full addiction over there. They also drink it out of the cutest little wooden cups that many of them carry around. Seriously!

We had a great meal and party at a place called Shelter. 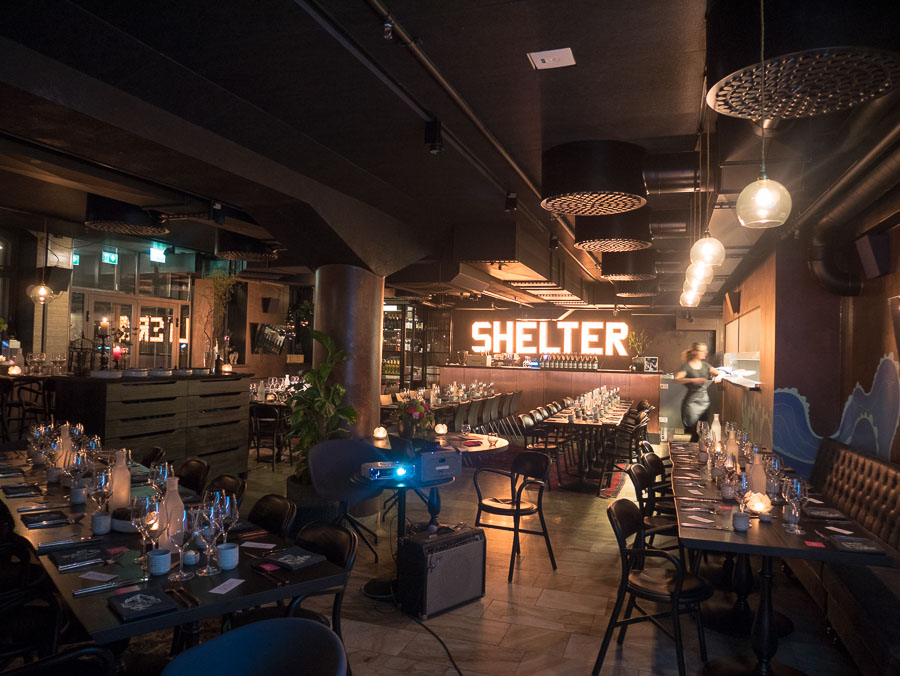 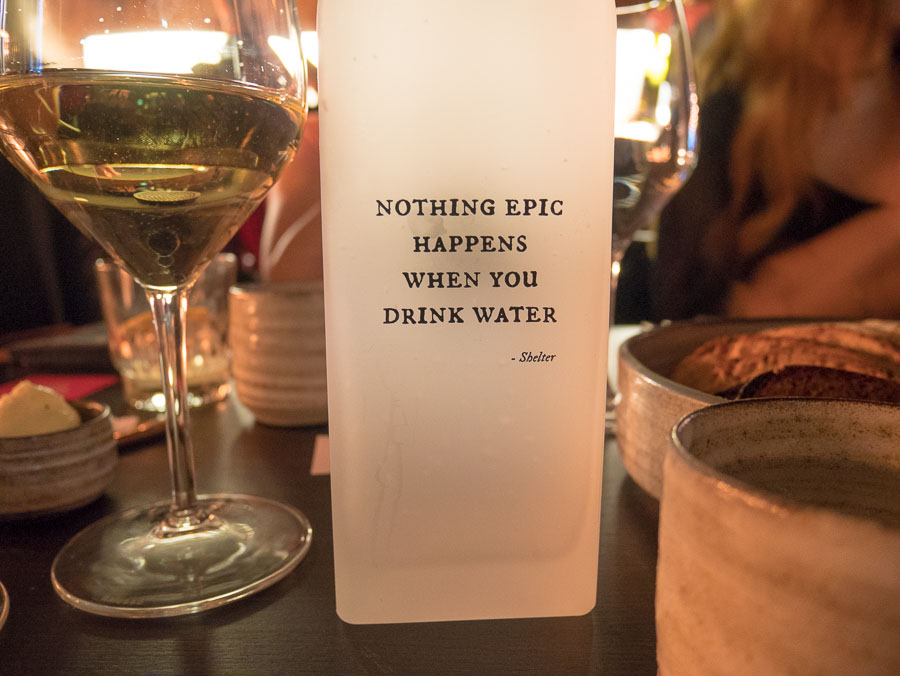 Getting to Helsinki & Away

I came from India, so for fellow India-based people, you can fly Jet Airways to London, Paris, or Amsterdam and connect from there. I connected with KLM (their code share partners), but you can also connect with Finnair and other airlines.

I’ve flown Jet dozens of times over the years. There are many reasons I keep going back to them. 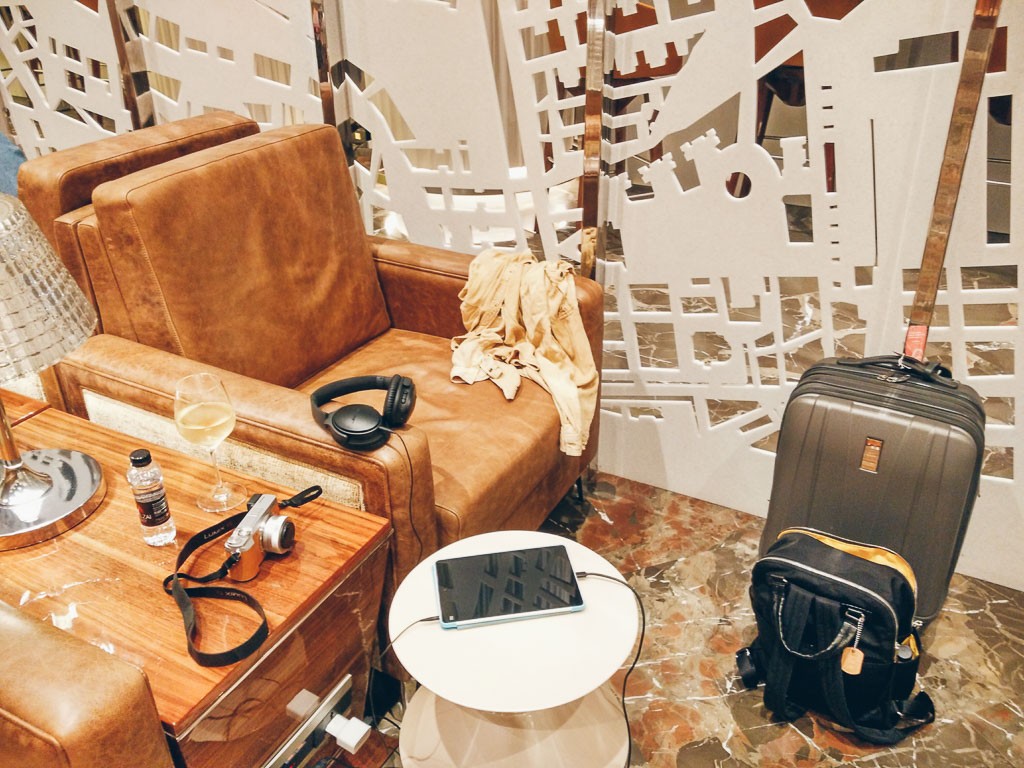 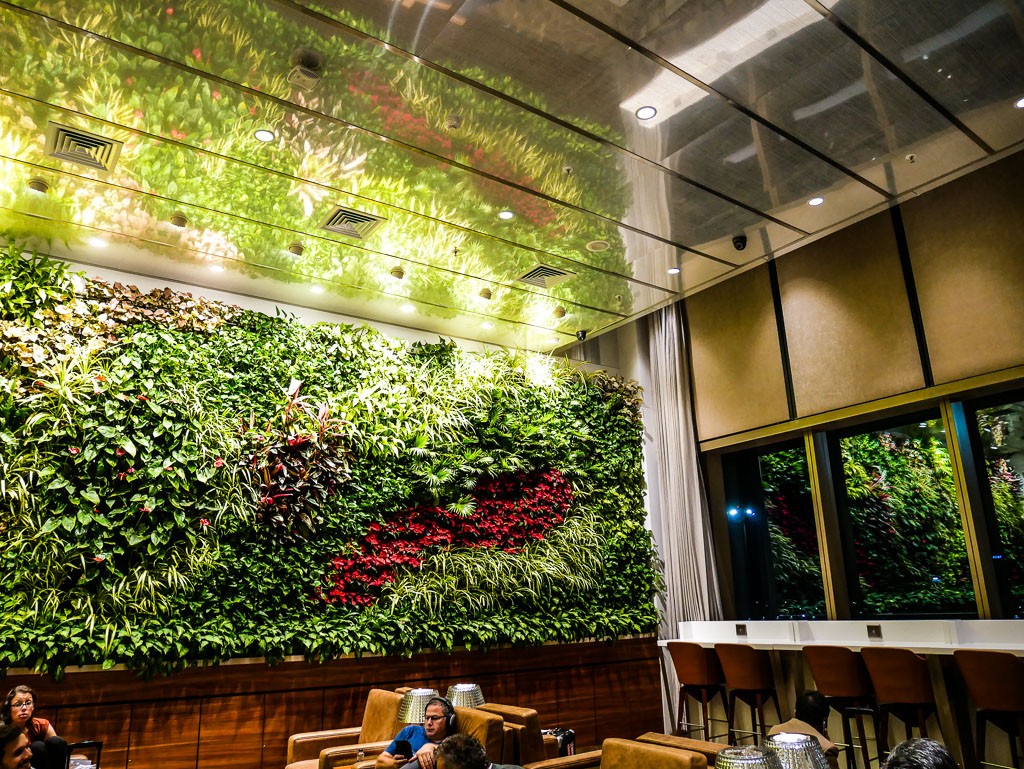 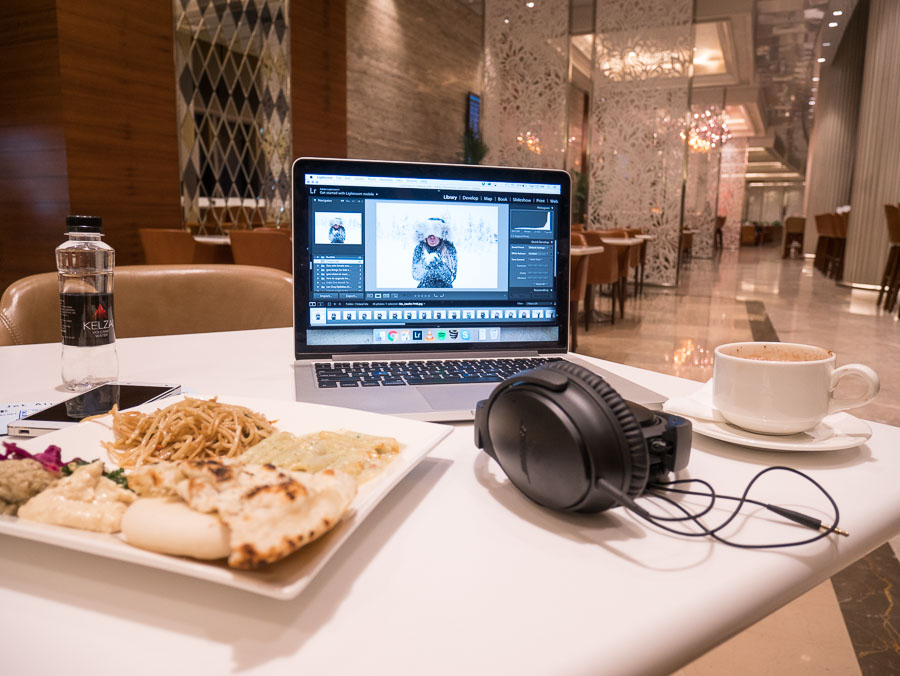 If you’re coming from the USA, you might consider Finnair as they have a stopover program and you can go onward through Helsinki. I checked out the Finnair Lounge when I left Helsinki as they invited all of us bloggers to try it. The food was good, chairs were comfortable and I had cocoa – but it was very crowded and noisy as it was in a small space. 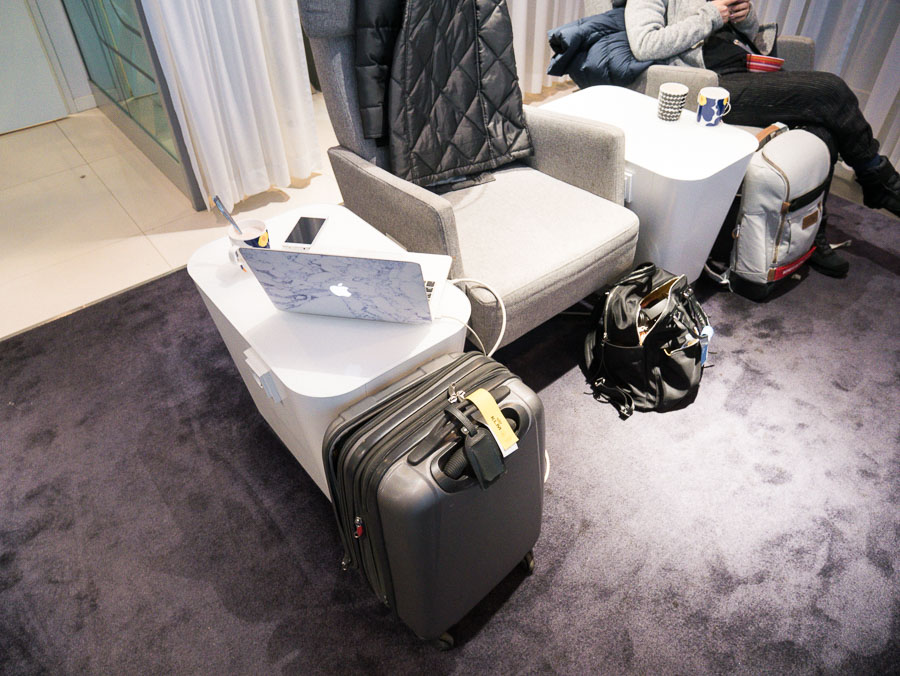 There are taxis around town, but you can also download and use Uber while in Helsinki. I partnered with Helsinki Limo (not in an actual limo) and they arranged my airport pickup and drop-off, which is great for business travelers. 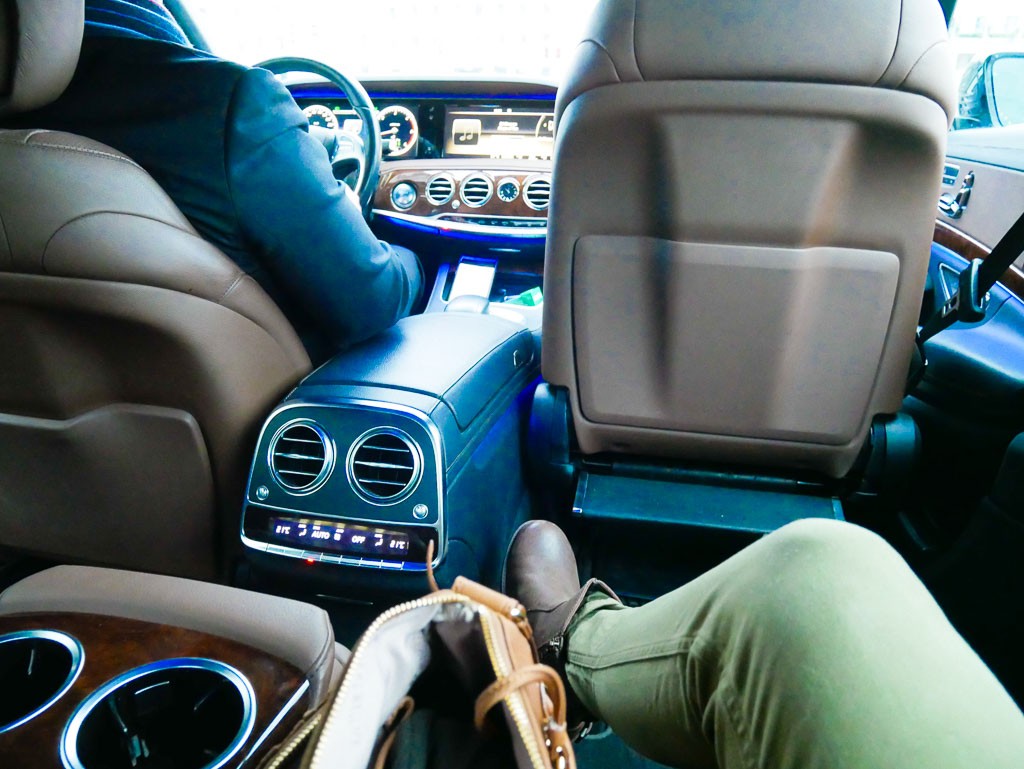 You can walk almost anywhere in the city center. It’s not very big. There are also local buses, trams, metro, and trains you can take to get outside the city center. I noticed bicycle lanes too but didn’t see any rental places. 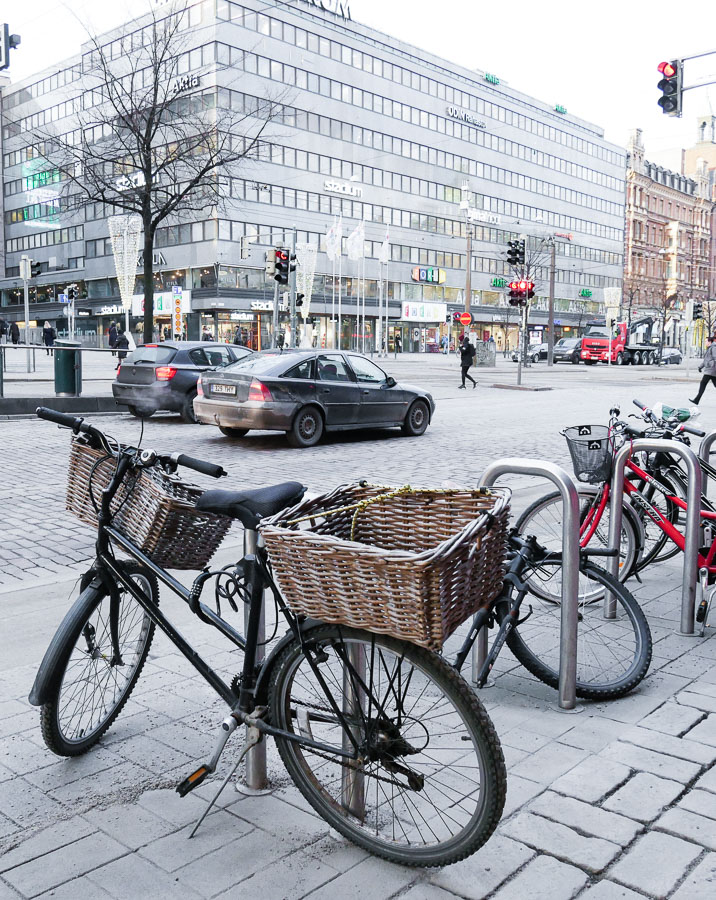 *During my layover in Amsterdam, I stayed at the Hilton Airport Hotel because I had 12 hours and it was just a 3-minute walk from the terminal. It was my first time staying at an airport hotel! I will definitely do that again. So much better than being exhausted in a lounge.

Where to Stay in Helsinki 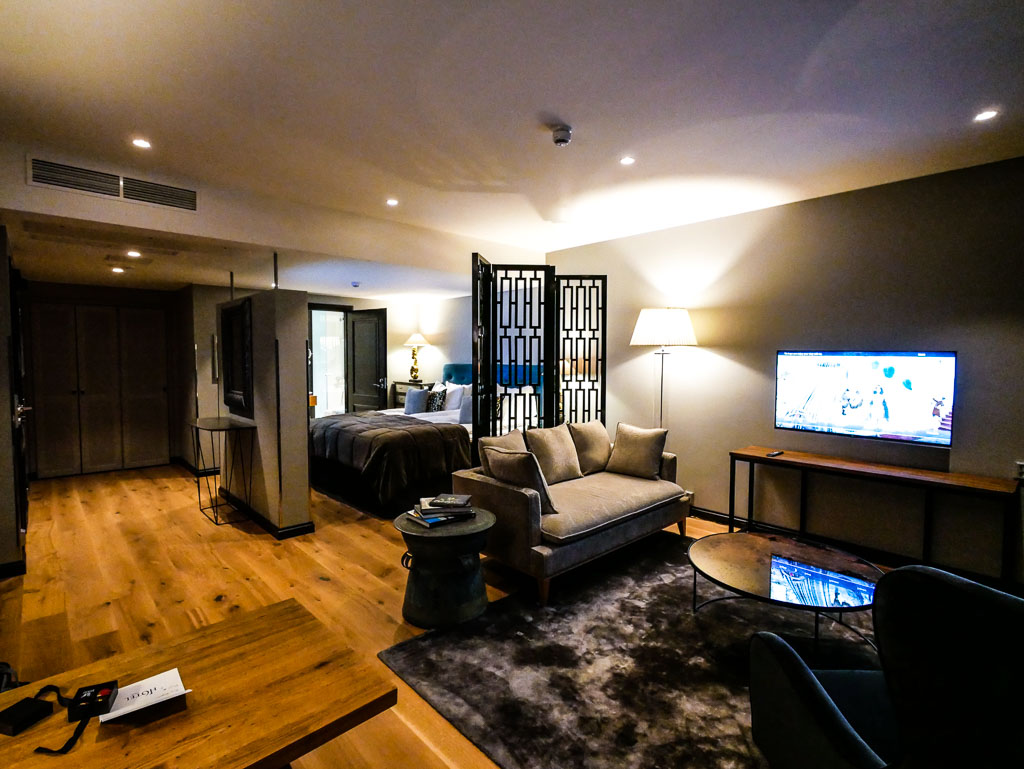 I stayed here just one night before heading off to Oulu. It’s the newest boutique hotel in Helsinki. I wasn’t asked to, but liked it so much I wrote a whole review about it. Book here

These are “pop-up” apartments that many of the bloggers stayed at. I didn’t. Sylvia from Heart My Backpack did and said it was nice but basic. Breakfast wasn’t included here. Book here 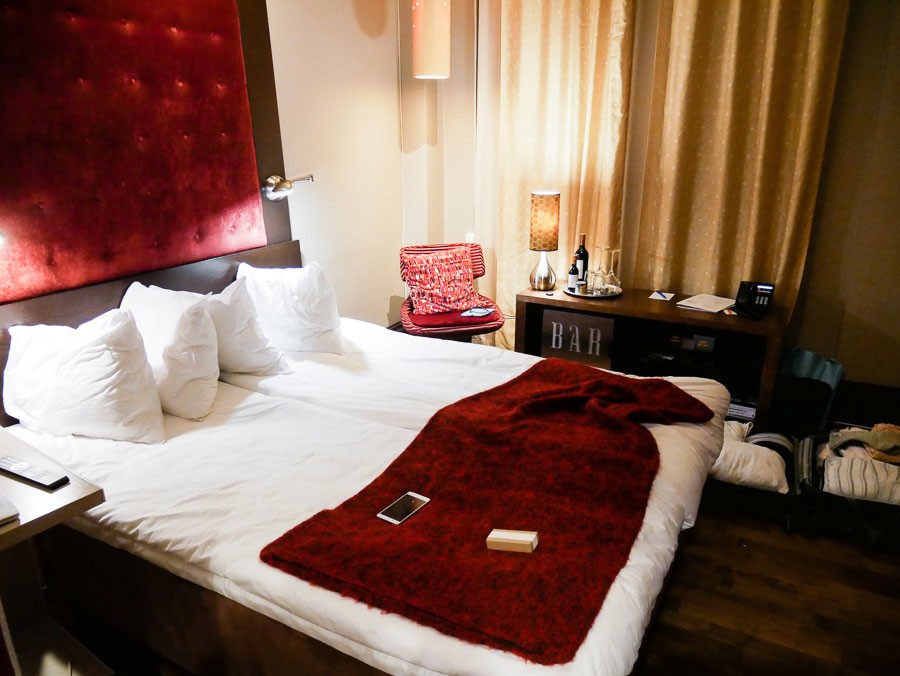 I stayed at Klaus K Hotel for 5 nights. It was a great hotel. The breakfast was SO good. The rooms were a little small, but I think I had the lowest rate room, so you can always upgrade. The location was great and it’s a design hotel. Book here

This is brand new and has a crazy amazing pool. We went here just for the closing party but many bloggers stayed here and raved about their huge rooms and bathtubs! Book here

I hope you’ve enjoyed my little tips for visiting Helsinki. There is so much nature and beauty to see just outside the city center, so don’t let the darkness get you feeling like it’s not a cool place. It’s got a LOT to offer (and some killer coffee shops). 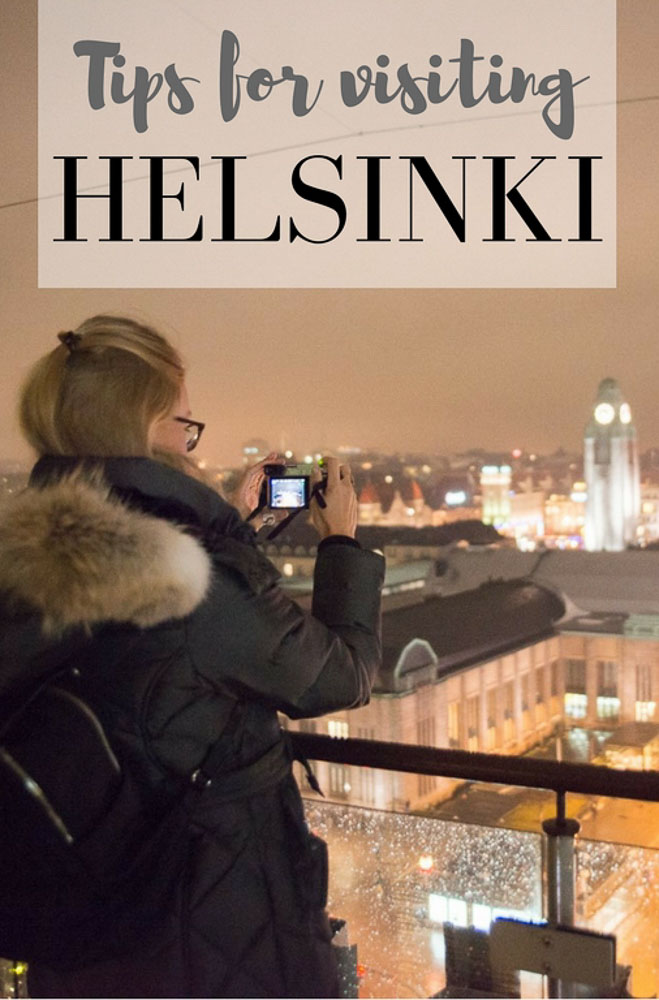 disclaimer: I was given a complimentary flight by Jet Airways, who I fly with consistently in and out of India. They are a favorite airline of mine and all opinions are my own!