Goa has some of the best intercontinental food in India. Because so many foreigners moved here and never left, there is a culinary influence from all over the world. My top 5 restaurants in Goa are Greek, Italian, Japanese, German, and Indian. These are literally the only places you need to eat at and you’ll be happy. I eat out pretty much every day because it’s sometimes such a hassle to cook in India, and going out is sometimes cheaper and obviously more fun- I never get tired of these restaurants! PS don’t think of this as a guide for food in India, because clearly it’s mostly non-indian. When I was backpacking I ate mostly Indian, but now that I live here, I act just how I did in the U.S. and eat what I crave… which are usually these restaurants! (I have since made another list, 10 more best restaurants in Goa). 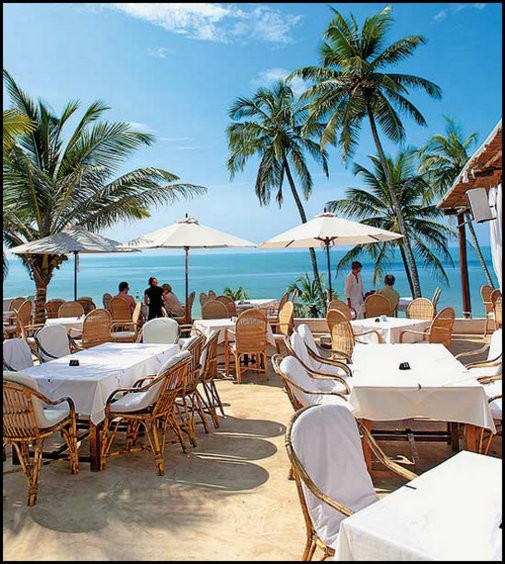 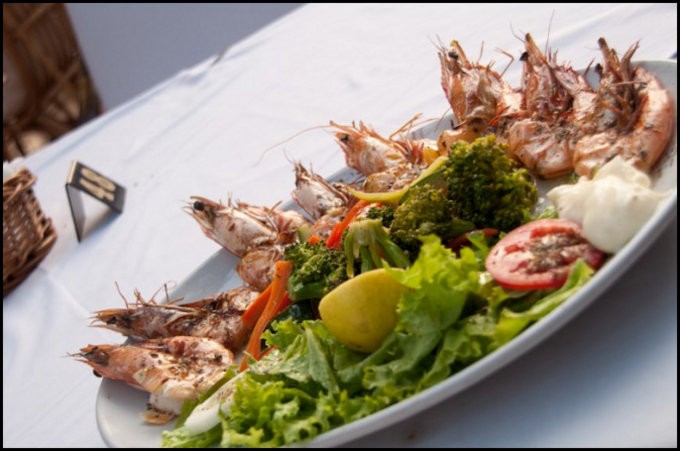 This is BY FAR my favorite place to eat. I always wanted to have a “spot” that everyone knew me and I could feel cool like on Cheers or something, and Thalassa is it. It isn’t hard to feel that way, because Mariketty is like everyone’s mother and will come give you a big hug when you see her. Lucky for me, during monsoon, she kept me stuffed full of lamb chops. Her Greek restaurant overlooks the sea with what I think is the best sunset spot in Goa. Thalassa is known most definitely as the best place to eat in Goa. It’s where Robert De Niro chooses to eat, as well as all the Bollywood stars. If you have an important meeting, or even a wedding, this is where you want to book it. She recently teamed up with Olive in Bombay for a pop-up Thalassa to appease her Bombay customers that come to Goa just for her food! Her imported lamb and beef are worth the splurge (in Rupee, but in USD it’s a steal!). I usually get the chicken saganaki, grilled halloumi, or greek sausages as a starter. For mains, either the lamb gyros, a wrap, or one of her seafood specials like king prawns. She makes a mean beef stifado, a beef tenderloin slow cooked in red wine sauce served with creamy mashed potato. Right now she has taramasalata, which Ben goes crazy over; it’s a traditional greek fish egg dip. On holidays, you can find all the locals at Thalassa drinking and eating lamb off a spit. This is where I started off my New Years Eve this year. Wraps are as low as 300 rupees, and imported meat will be closer to 800 rupees. Dinner comes with a show, as Mariketty breaks plates, and the Greek and Italian guys that grew up here in Goa (including her son) do a traditional dance that makes all the girls swoon! 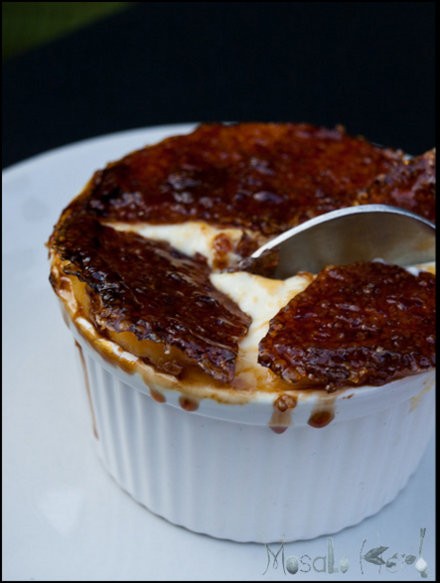 Hidden in a back alley in Anjuna, this tiny Italian restaurant will require a booking during high season. Italian food made by Italians that have been in Goa since the Golden years= perfection. Ben usually special orders a pizza with bolognese sauce instead of marinara, and I go for the bolognese tagliatelle or  the creamy broccoli pasta. They have amazing starters of spicy clams, bruschetta, and fresh salads with amazing olive oil. For desert, the rich chocolate mousse I order never gets finished because I’m so stuffed, but Ben’s crème brulee is gone in two seconds. He can order a second one and act like the first one never happened. According to him, it’s the best in the world- you need to pre-order one because they run out! Goa has a few very good Italian places to eat, but Basilico does have the best food and a very chilled out vibe. The price here is about 300-500 rupees per meal. 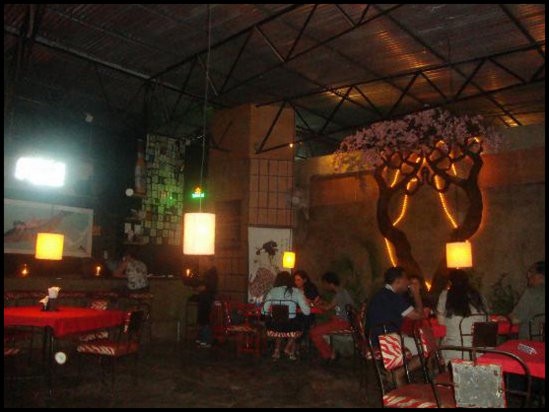 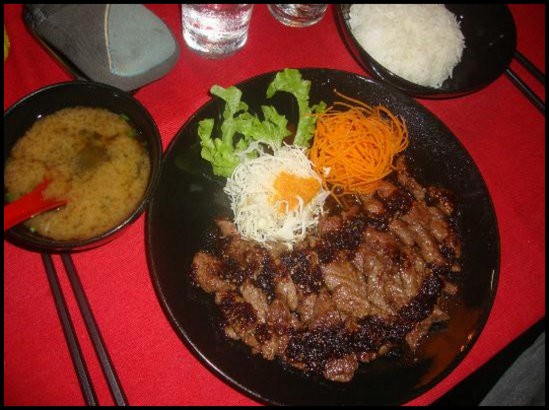 Mmm, I’m almost too hungry to write about Sakana. I think I might have to go there tonight. The owners are a wonderful Indian/Isreali and Japanese couple who lived in Asia before settled in Goa. They KNOW good food. I had a tried almost everything on the menu (except sushi, I don’t think my palate has grown up enough, but Ben loves it). Regardless, I always order the same thing: fried beef momos as a starter and the beef yakiniku which is served with a ginger salad, rice, and miso soup. For both, it’s about 600 rupees or 12 USD. Ben’s go to is the chicken katsu which is SO delicious. They are very well known for their sushi and the restaurant has a cozy Asian vibe with a flower tree that magically grows across the roof each year. During high season you might need to book a table ahead here, so sometimes we get take-out and eat this at home. It’s located in Vagator near Roma pizza and Bubble Brunch. 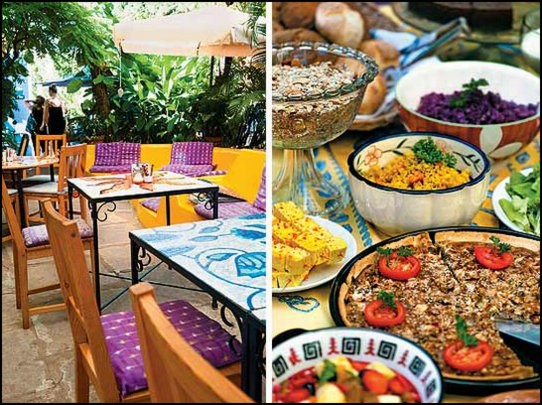 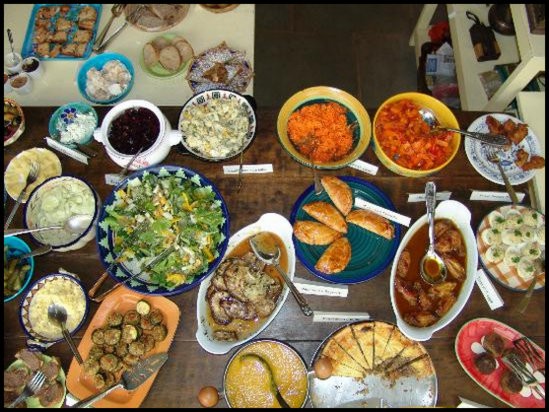 This is just one minute down the road from me in Assagao, and I’ve just recently found out that means we live in the “Beverly Hills” of Goa. Run by a German woman, they serve pretzels, bagels, cream cheese & smoked salmon, sandwiches with imported cold cuts, and German meatballs with potato salad, pastas, and soup, among MANY others. My favorite thing to order here is a salad. They are the one place that understands I like lettuce as the biggest part of the dish, instead of tomatoes with a lettuce garnish. It’s all cleaned twice with filtered water so I don’t worry about getting sick, and they serve a wonderful chicken, pomegranate, pineapple, and cashew salad that I have at least once a week. The paninis are a little small so Ben usually orders two. You won’t believe how low your bill is at the end; it’s all so decently priced. She makes great “detox” juices. On Sundays, she does a scrumptious brunch, featured above, with coleslaw, deviled eggs, chicken, salads, breads, cakes, etc. for 600 rupees per person. Sunday brunch ends at 5. It’s a great place to pre-order birthday cakes as well. The ambience is my favorite: comfy benches with pillows and sheer curtains across the top to keep it cool. It’s a nice place to meet friends for a long lunch. 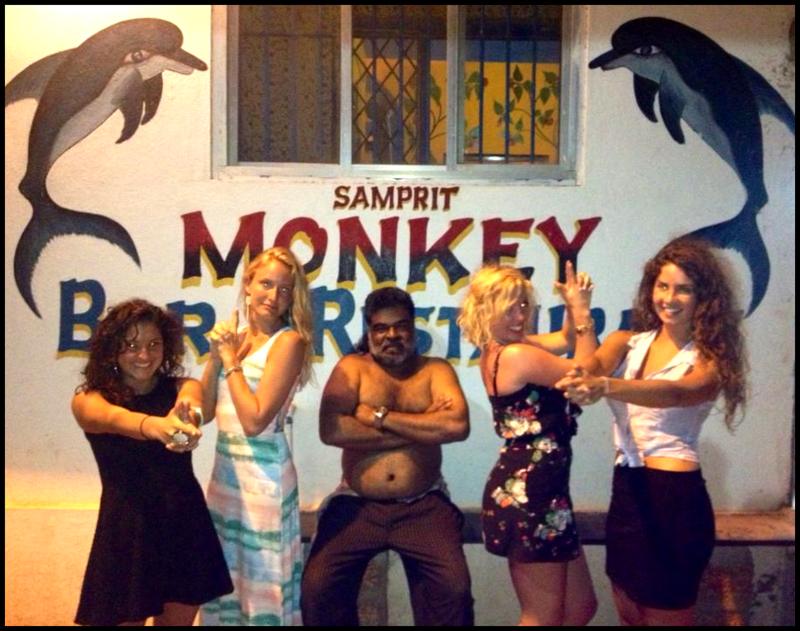 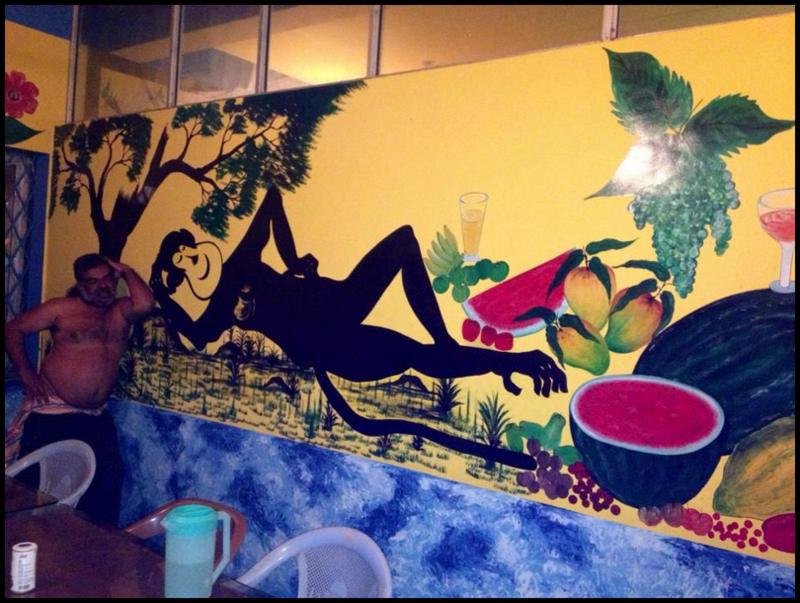 you’ll be lucky to meet the multi-talented Chandu: what can’t he do!? he’s a model, an arm wrestling champ, and dancer. 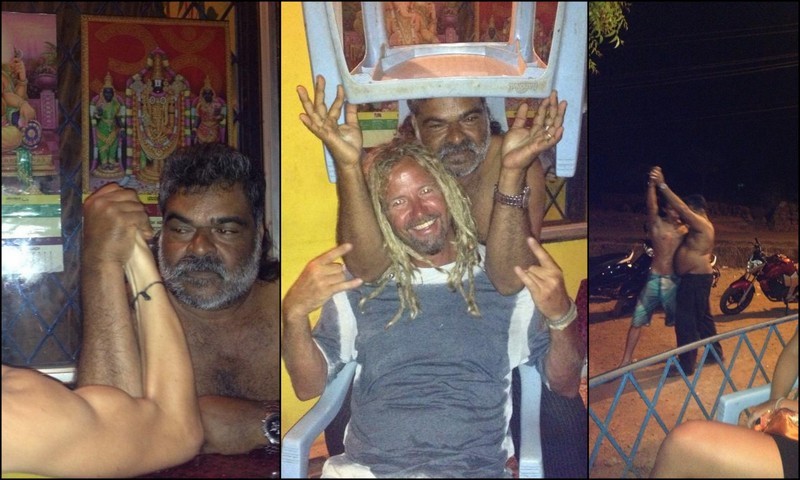 Now, what kind of blogger would I be if I didn’t tell you my secret place? If you want local Goan seafood, Monkey Bar is the place to go. I am not one for beach shacks; I absolutely have never had a good meal at one (except Brittos, but I don’t like the crowds there). Monkey Bar is very local and serves up masala or rava-fry kingfish, ladyfish, mussels, calamari, garlic butter brawns, and whatever else Chandu creates that day. Located in Anjuna behind the police station, the owner Chandu will make sure you have a good time by filling you up with “medicine” and cashew feni, the homemade local drink (that will destroy your liver and ability to walk after just one shot). You’ll feel right at home when he shows you his photo albums and tells you the story of “f*ck the chicken… It’s a place to go for the evening, have too many drinks and laughs, stuff yourself with fish and chat with the locals. When Ben and I have friends come we always take them to Monkey Bar, but they never remember it the next day.

PS: Coming to Goa? I wrote a 170-page e-book, Insider’s Guide to Goa. After five years of living in Goa, I am confident this book is the most comprehensive, up-to-date guide to Goa plus it has all my secrets inside. Click here to buy it now.