Why Trekking in Nepal Should Be on Every Traveler’s List

As I was driven through the streets of Kathmandu to my hotel on the outskirts of Thamel, I was fondly reminded about why I had fallen in love with Nepal 10 years earlier. The narrow streets of Thamel, lined with food stalls and trekking shops didn’t look very different now, to how I remembered them. The sometimes smothering, sometimes pleasant aura of Tibetan incense was all over the streets and this, coupled with the heavy aromas of the many spices used in Nepali cuisine, nostalgically took me back to my first trip to the country. This time though, I was here to participate in an adventure trip! Rafting and trekking in Nepal were on the cards and excitement was slowly building up. 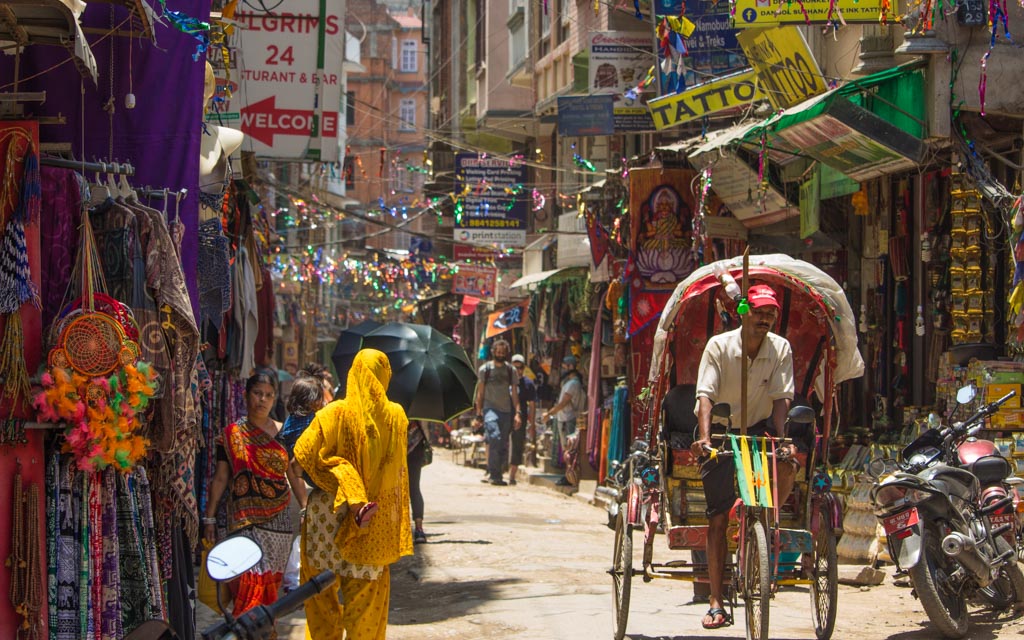 The chaotic streets of Thamel, Kathmandu

Here is why trekking in Nepal should be on every traveler’s list.

For those of you who are not familiar with Nepal, the country is a small, very unique nation wedged in between India and China nestled high in the Himalayas. It is home to 8 to the world’s 10 tallest mountains including Mount Everest, the highest, for which it is most famous. Nepal is much more than Everest though. The country is also blessed with gorgeous landscapes, national parks with tigers, elephants and rhinos, rice terraces, beautiful temples and monasteries, diverse ethnic groups and some of the friendliest people that I have ever encountered. 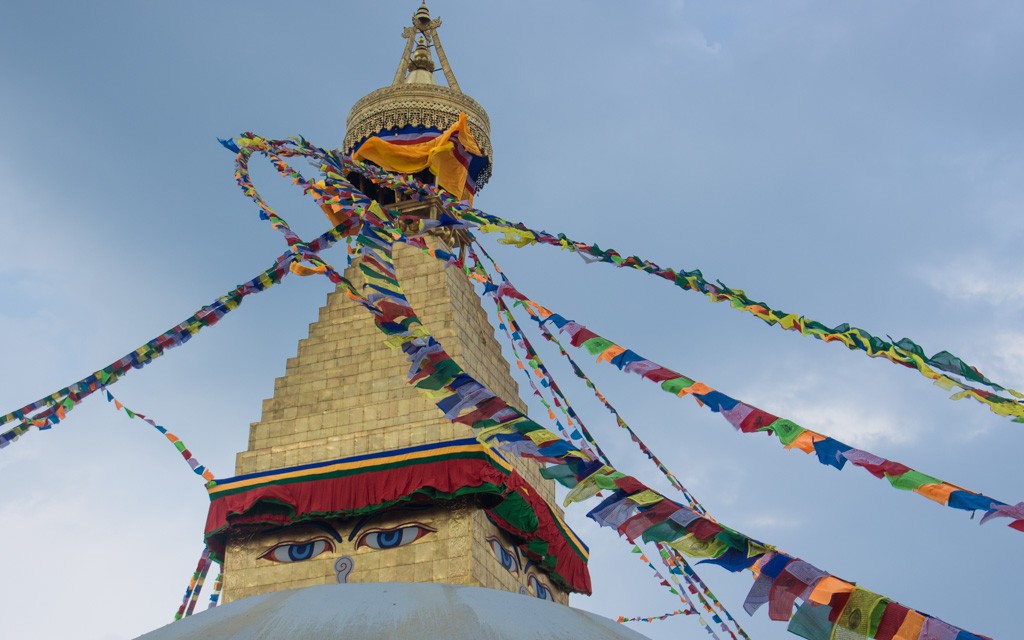 The day after I arrived, we drove from Kathmandu to Pokhara, stopping for a rafting experience on the Trishuli river on the way. Exhilarating is an understatement! The country’s waters rush straight down from the Himalayas creating gorges through the mountains, hence giving rise to great white water rafting opportunities at different levels. As we got soaked, prodded each other with our paddles and laughed our way along the river, I realized that this was a great way of getting to know the group of people that I would be spending the next 6 days with! 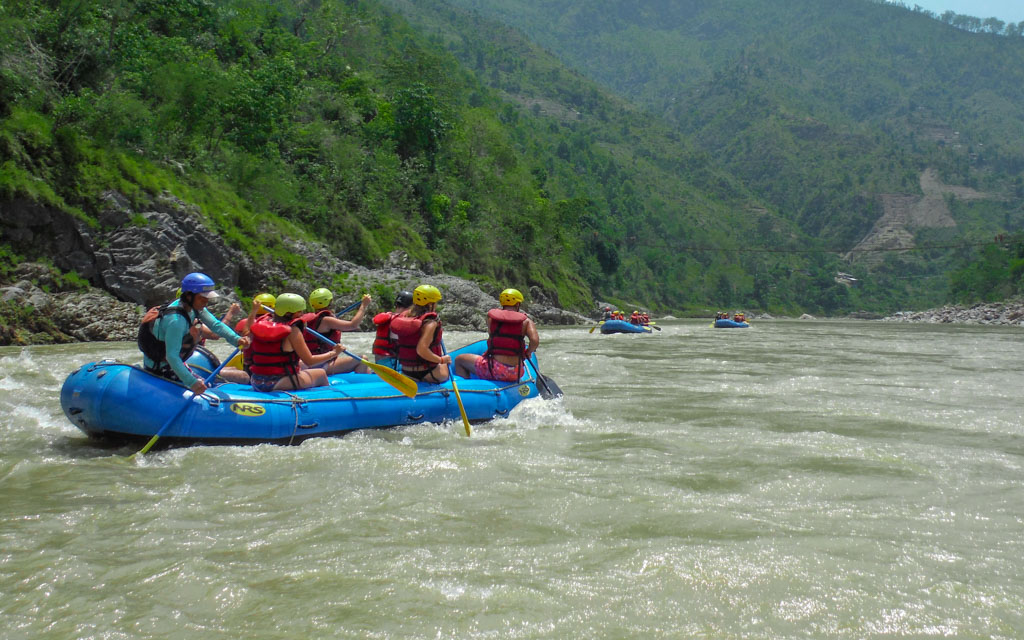 Rafting on the Trishuli river is such a fun experience!

The next day, after having spent the night in Pokhara, we were driven to Nayapul from where we would start our trek. We were on the Poon Hill Trek, a four-day hike across the lower Annapurna region which involves trekking for most of the day, stopping for lunch breaks and finally arriving to a tea house or basic guesthouse where we would spend the night.

We were advised to carry only light daypacks, filled with water bottles, a raincoat (essential if you’re trekking in Nepal during the rainy season like we were!) and a few snacks on the trek; porters would be responsible for carrying the rest of our stuff packed in waterproof duffle bags all the way to the teahouses where we would be spending our nights. Since I have always carried all my own stuff on multi-day treks, this seemed like a great arrangement to me! 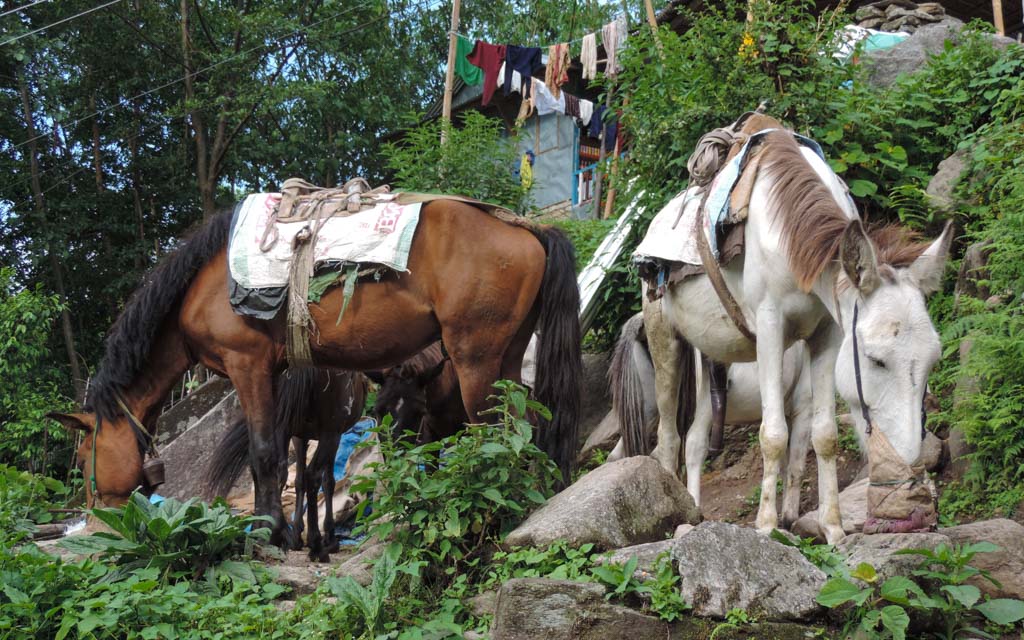 Horses during the trek

My first day of trekking in Nepal was as pleasant as it gets. The route to a little village called Tirhedhunga was up across a moderate incline which was easy to hike. Our walk took us over suspended bridges, on little trails by the river, through bamboo forests and besides waterfalls, where we encountered cows, donkeys, goats and some beautiful horses which made the hike all the more interesting. We stopped for lunch at the Mountain View Guesthouse during which it unfortunately it started raining and although we would have liked to wait for it to stop, our guide insisted that we “zam zam” (let’s go). And right he was since it didn’t stop raining all evening. We were trekking during the rainy season where afternoon rains are expected and common. 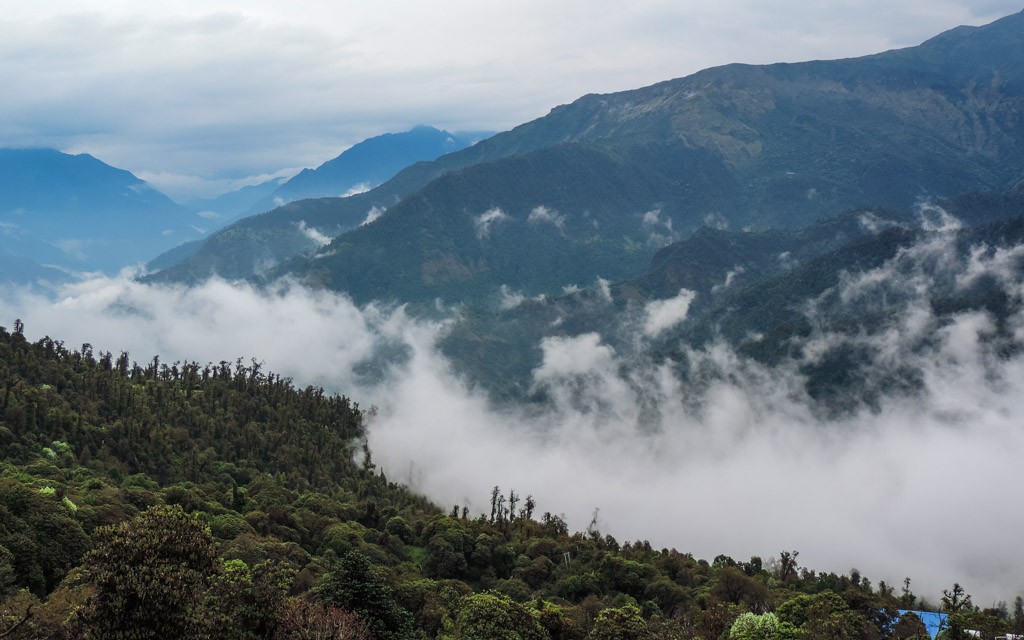 One of the many beautiful views during the four-day trek

It was only an hour’s walk to Laxmi Guesthouse where we spent the night in basic, yet comfortable rooms. We had been told that day two was the hardest day of the trek since we would need to climb up 3767 steps possibly in scorching weather conditions so we filled up on noodles, swiss-style rosti and of course everybody’s favourite snack, momos to prepare our bodies and souls for the next day’s climb. It was here we noticed that the dinner menu was identical to the lunch menu at the previous teahouse, and every other menu thereafter would be also be identical. This “generic” menu was pretty vast though, and every teahouse had their own individual style of cooking, so we never actually got the same dish twice! 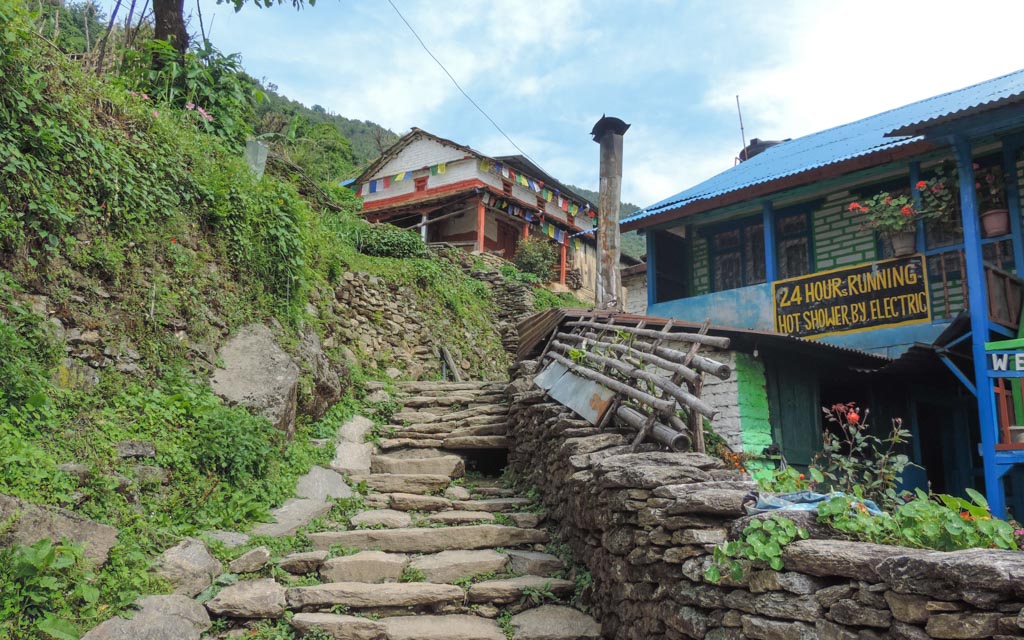 As expected, day two of the Poon Hill trek was indeed the hardest. Although we had been warned about the stone staircase of 3767 steps, this was not the final number of steps for the day but rather the steps included in one single stretch of the route. The final number surely must have exceeded 5000 steps, which took us up to a height of 2900 metres and although I was exhausted by the end of it, I was happy to have survived a sorely-needed workout!

Luckily, the cloudy weather protected us from the scorching sun and although we did not get the best views, since it was so overcast, we did avoid a much-feared sunburn during our climb. We spent the night at Hotel Hill Top in Ghorepani where I devoured a well-deserved yak steak (with more momos on the side of course!) 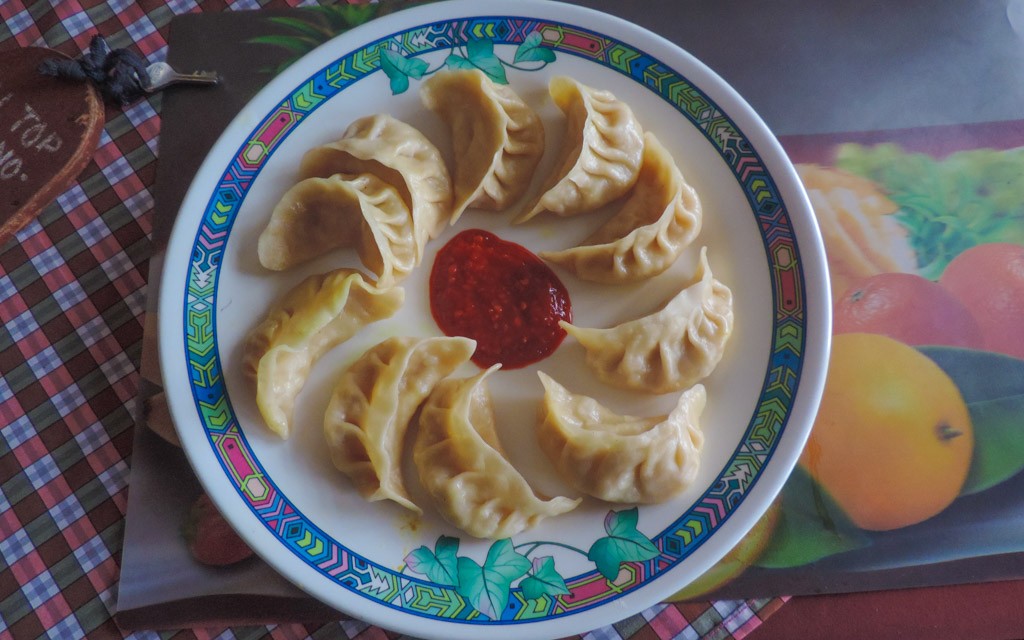 Day three was the most beautiful of all the days we spent trekking in Nepal. I had set my alarm for 3.30am to be ready in time for an hour’s long uphill trek to Poon Hill to watch the sunrise. Unfortunately a storm pretty much destroyed our sunrise plans although we didn’t complain about the few extra hours of sleep we got, as we groggily went back to our beds! Our climb that day took us up way above the clouds across paths lined with prayer flags and later into foggy forests which added a very eerie and mystical feel to the experience. Fishtail Lodge, our guesthouse that night is well known among trekkers for its coffee and indeed, it was the best I had in Nepal! 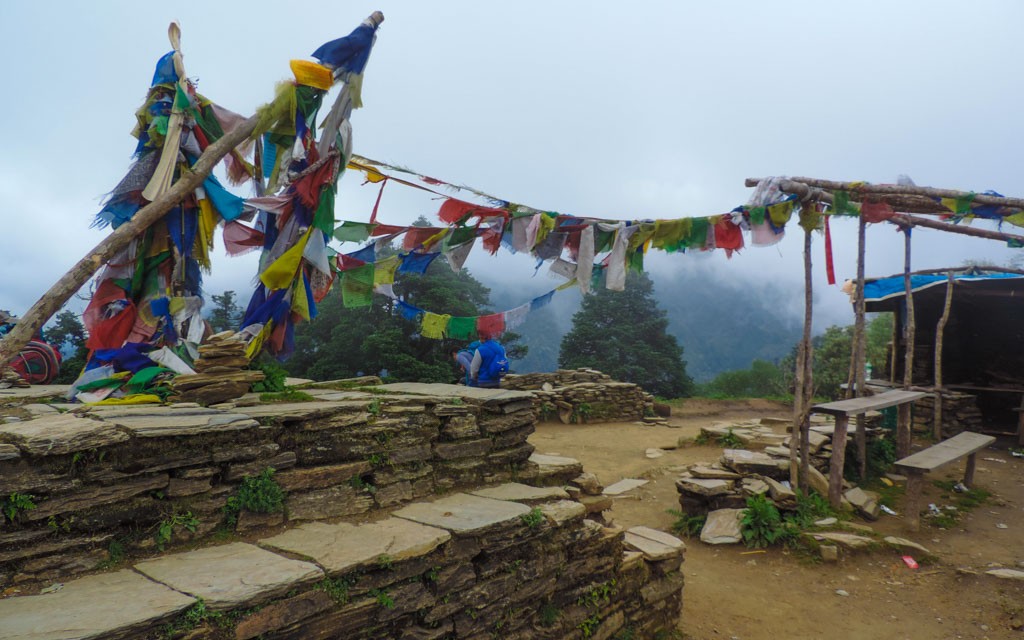 The highlight on day 4 should have been waking up to snowy mountain views including a view of the Machhapuchhre mountain with its infamous fishtail peak, but the day was cloudy already and the mountains invisible. Luckily, just before we set off on the last trek, it cleared for just about five seconds so that we could catch a short but sweet glimpse of the snowy mountain peaks which Nepal is so famous for! 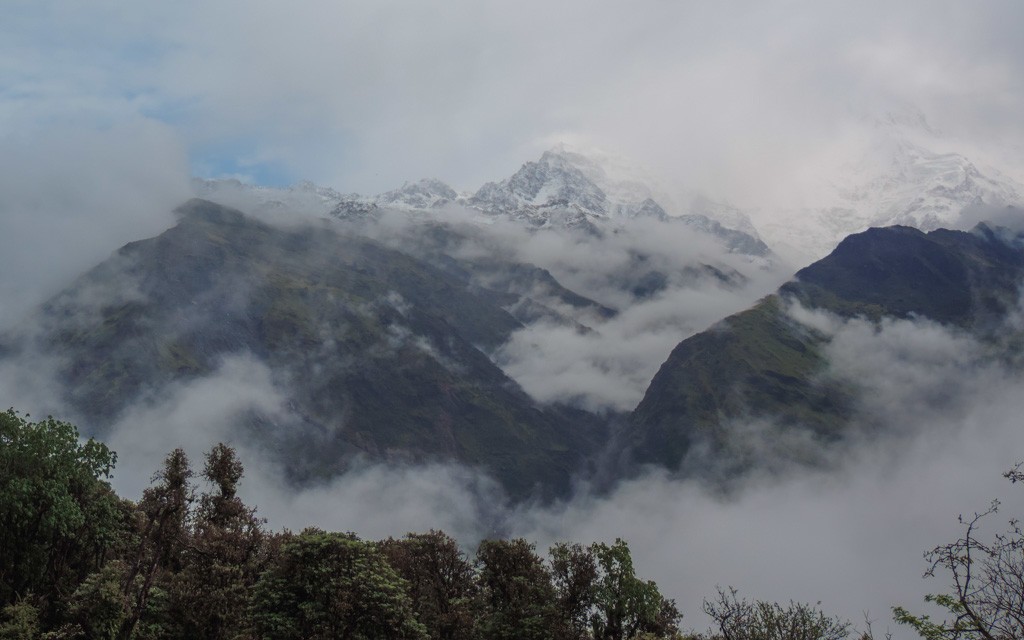 We woke up to this view on Day Four – snowy mountain peaks at long last!

This pretty much set us all in a good mood for the rest of the day. The trek on the fourth day was mostly downhill, and because I find that going down so much easier than going up, I skipped and jumped my way across lush fields and rich forests until we reached the small village of Kimche with gorgeous views of rice terraces. 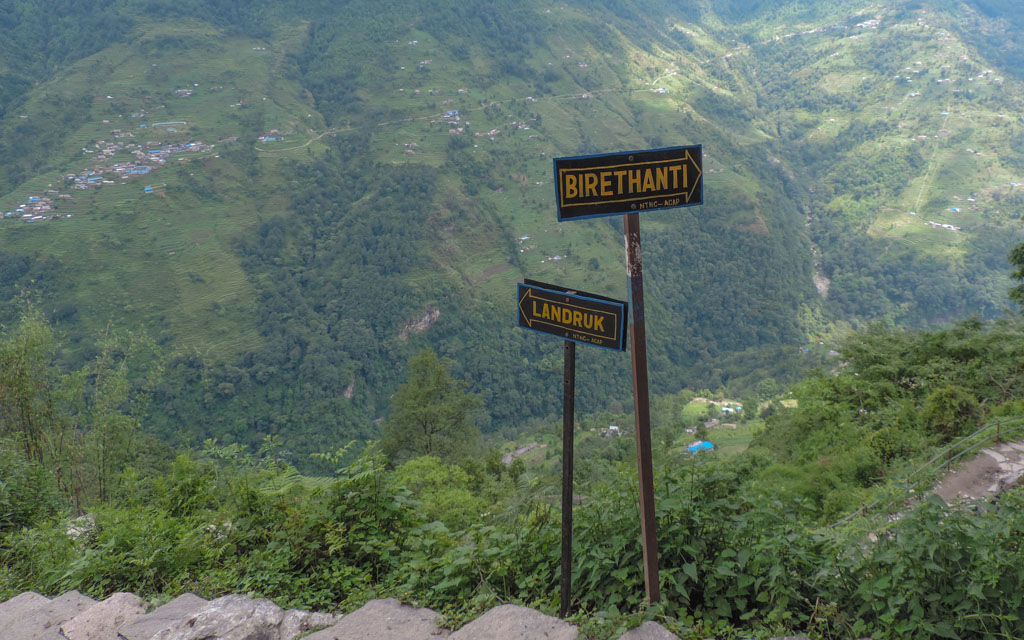 Just outside the village of Kimche

This was our final stop and as I sat in the van on my way back to Pokhara, half asleep after the strenuous activity I had endured during the past few days, I promised myself that I would come back to Nepal for the third time, for a longer trek, perhaps right up to Everest Base Camp, so as to enjoy more of what the beautiful country has to offer.

Meanwhile, I was looking forward to spending the next couple of days relaxing in the Hotel Pokhara Grande where I could get cleaned up properly and get some laundry sorted, and to enjoy more of Pokhara and Kathmandu over the following days.

A hot bath followed by a steaming mug of coffee in the comfort of a luxurious room never felt so good! 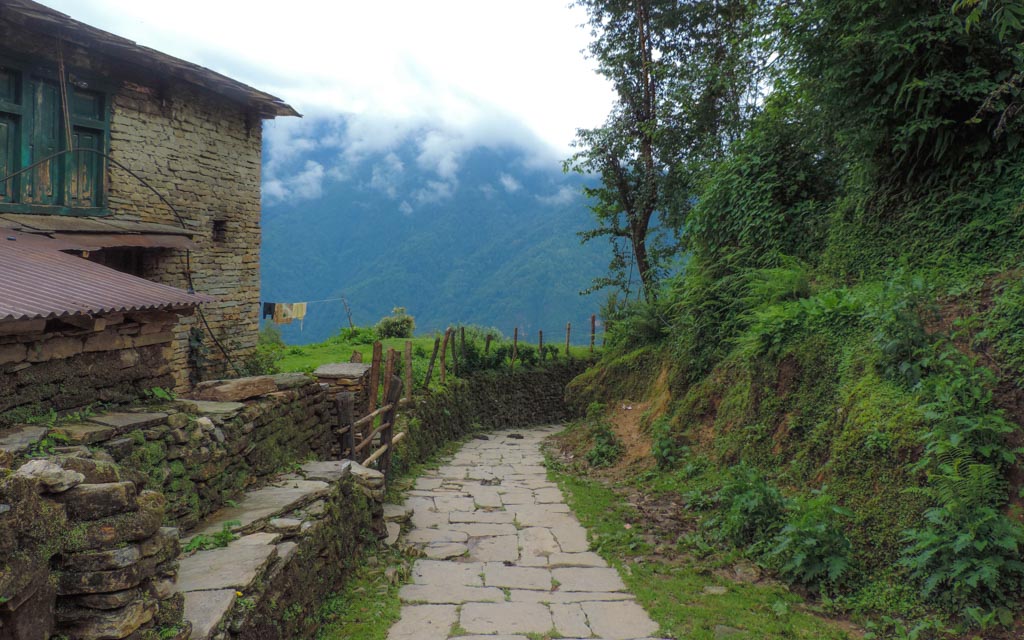 The path towards Kimche

The Food on the Trek

I must say that although we were advised the food served during the trek would be “basic”, it actually exceeded everybody’s expectations of it. The choice was vast, the portions were large, most of the dishes I tried were very tasty and I quickly got into the habit of ordering thick milky porridge and Tibetan bread for breakfast, hearty dal bhat accompanied by masala chai for lunch and momos and rosti or pasta for supper. As soon as I arrived at the day’s final guesthouse, I would also follow a routine whereby I would obtain the key to my room, lay out my sleeping bag and other stuff I needed that evening, have a hot shower and join my team mates to celebrate the day’s achievement with an ice cold Gorkha beer. 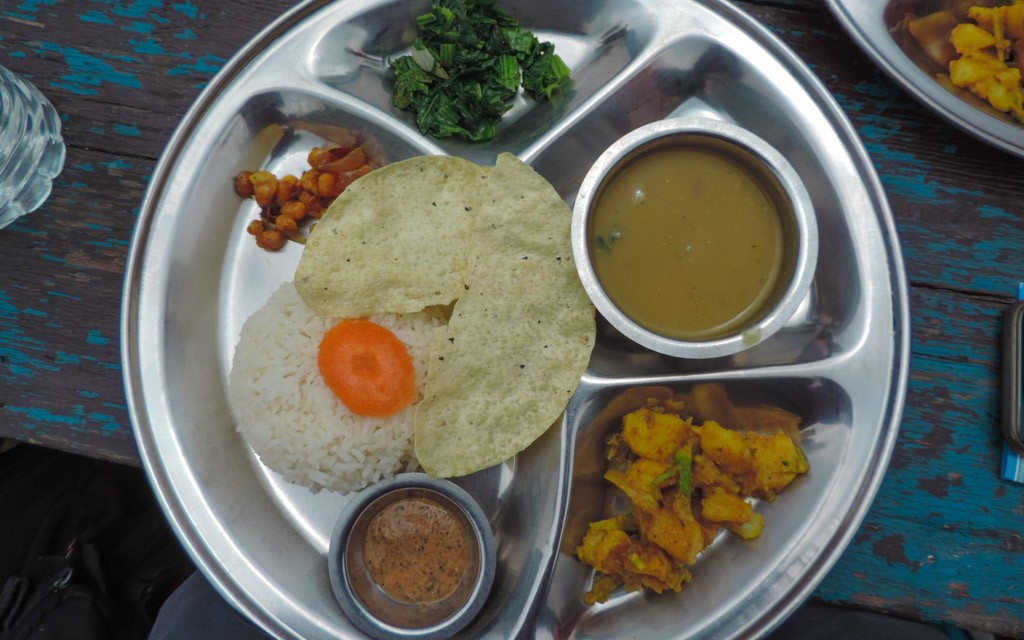 Trekking in Nepal up and down hills and mountains, across paths lined with thousands of prayer flags, through lush vegetation and fairytale forests gave me a sense of wonder, peace and fulfillment as well as the opportunity to explore the beautiful country. I encourage every traveler to include trekking in Nepal on their bucket list! 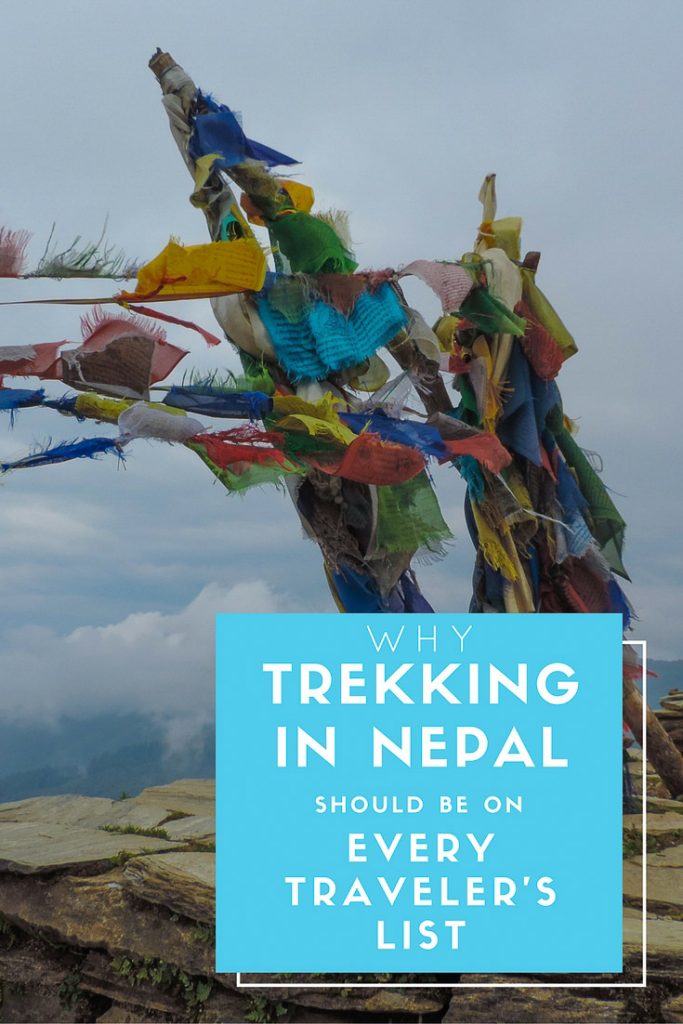