Ask Me Anything: Can you only wear a bikini in Goa or other parts of India, too?

Home » Ask Me Anything

Welcome back to my “Ask Me Anything” series. I try to answer FAQ every once in a while and something I get asked a lot is can I wear a bikini in Goa and can I wear it other places in India too?

The short answer is yes, you can wear a bikini in Goa and no, you can’t many other places in India. I’ll start with just Goa bikini rules – of which there are just a few.

There are no “bikini beaches” in Goa. Bikinis in Goa are seen on most beaches and it’s acceptable (except to some seriously devout old people who probably wouldn’t ever come to the beach anyway). I mean, people lay out topless in Goa. It’s been going on since the 60’s and Goa is really different from the rest of India in not just this sense, but so many other ways, too. 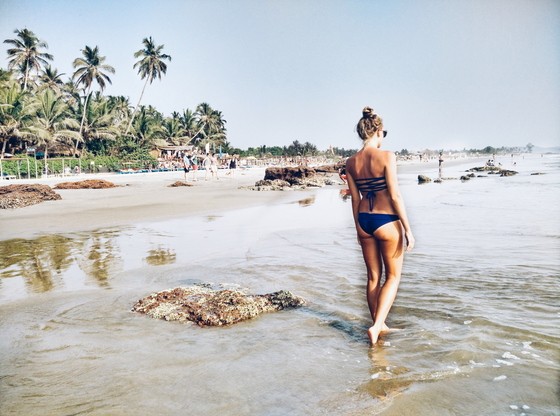 Occasionally, a politician will be riled up about it say they want to ban bikinis in Goa. But nothing ever comes from this. While you can wear a bikini on the beach, you do need to cover up until you get there. You can throw a dress or sarong over it while you walk down to the beach.

Don’t ride around on your scooter in a bikini! That is not okay here.

Are there some beaches you shouldn’t wear a bikini?

Yes. There are none where it’s not allowed but there are some that I, personally, would never get into a bikini at. Those are all the beaches around Panjim and Baga. Baga beach is packed. You’ll see ladies in sarees on the beach and it would definitely feel weird to wear a bikini there! You will get too many stares and people photographing/videoing you.

There’s a fine line between following the culture of the place you visit (as an outsider) and really seeing the modern new culture coming up. My thoughts on this are always: what are my Indian girlfriends doing? They’re wearing bikinis. So shall I!

You’ll find Indian bikini brands here like Studio Tia, too and yes, Indian women in bikinis on the beach. While being culturally sensitive, it would be ignorant to see India as just a place of modesty and religion. Indians love to dress sexy, party and are very modern. It’s insulting to young modern Indians living in Mumbai when you think that they are basically living in a stone age. They have H&M, Forever 21, and more here to buy bikinis and they can order online from sites like ASOS and ZARA as well. 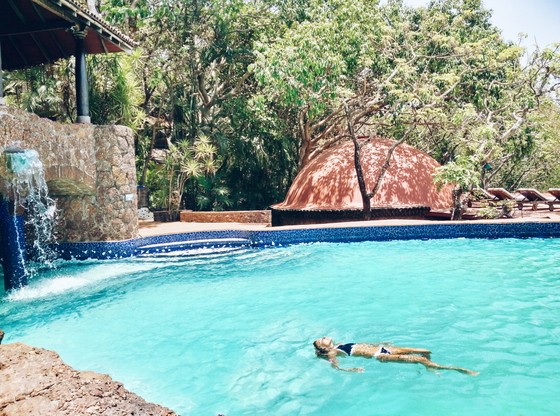 Will you be hassled more if you wear a bikini in Goa?

No, you won’t be hassled more unless it’s in Baga or beaches around Panjim. Most people are wearing bikinis here. People of all shapes and sizes and it’s just normal, like anywhere else. Actually, the bikinis are so much skimpier here because most people are European, that that is what younger Indian girls are wearing, too. It’s even more skimpy than what I would see in Ohio.

While Goans are used to seeing girls in bikinis, that doesn’t mean all Indians are so yes there might be some times when an Indian male is staring a little too hard or trying to take your photo. It’s not a biggie, just tell them to buzz off!

In case you’re wondering what those same dudes are wearing on the beach? Their whitey tighties. Which become see-through when wet. And this is totally normal, apparently. 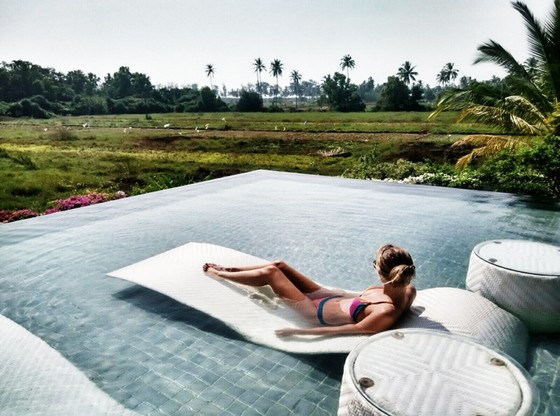 But, in the rest of India, Bikinis are not exactly accepted.

There are a few places it’s okay to wear bikinis in India, and that would be Goa, Varkala, Kovalam, and five-star hotels all over India. There are other places but those are the most popular for tourists. Other than that, I can’t really think of somewhere that it would be okay. You can wear one-piece swimsuits in other places which is more acceptable.

It’s a funny thing where you might think that putting gym shorts over your swimsuit is better – but there are often signs at pools saying “real swimming outfits only” because they don’t want people to swim in their clothing. 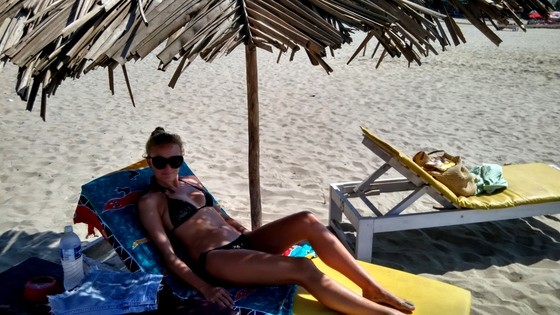 I live in a complex in Goa, and when Indian families from North India come who don’t wear swimming suits, they swim in their clothes and get in trouble.

PS: it’s also customary in India to always shower before getting in a shared pool!

What to wear in India & How to dress in India

So, that’s about it on bikinis in India. It’s pretty simple and I think nothing you need to stress about. If you want more tips on how to dress in India, click over to that link which has all the do’s and dont’s.

If you’re headed this way, please take a minute to buy my book, The Insider’s Guide to Goa. It has 170 pages of my top tips and everything to eat, see and do in every location in Goa. You can click here to buy it.