I’ll just go ahead and apologize in advance about the shit quality of the photos of Dahi Handi in Mapusa, Goa, India. I wasn’t sure what to expect last year and didn’t bring my camera.

There are SO many festivals in India and some turn out photo-worth, while others are just kids throwing fire crackers and drunk dudes running around. Turns out, this was photo-worthy!

These are actually from last year, but I never got around to writing about it. I wanted to post this before the next one which is Sept.5 so you can arrange to go if you are in India at that time. 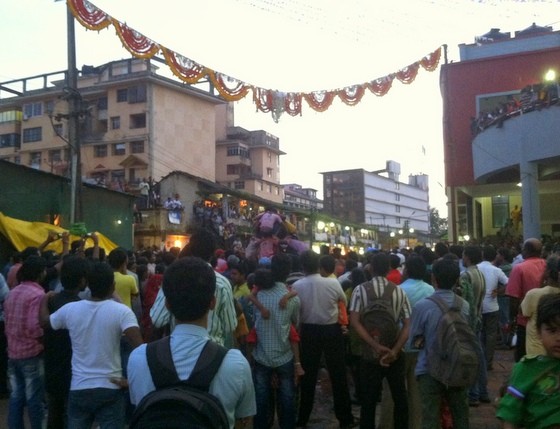 This holiday is for little Krishna as a child. As I’ve been told he was a naughty little boy (and as my Hindi teacher says, he was not mythical as some Hindu Gods are, but a real boy who I did not know). He used to sneak around stealing curd/butter from the neighbors.

To celebrate his awesomeness, this holiday has a special event where govinda teams work together to climb each other and reach a bowl of curd, which is VERY high up, but instead of curd there is money in it! Woo hoo!  It’s hanging from a decorated rope which can be lowered if after too much time it’s realized no one can reach. 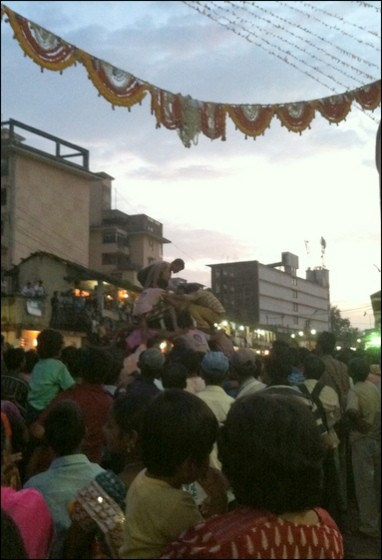 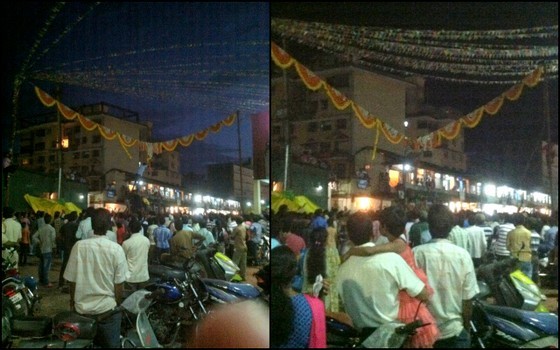 It’s quite shocking to watch them work together. First a group of boys crouch in a circle with their arms around each other like football players in huddle. They stay squatting. Then another layer pile on top in a circle, and stay squatting. This continues for layers and layers of people. THEN the magic happens. One layer by layer, starting at the bottom they stand until finally the one boy on top reaches for the curd.

They do fall sometimes, and sometimes there are injuries or even death.

We watched about 45 minutes before finally someone reached the money! He grabbed hold while he team fell down and everyone yelled and cheered to the goan electronic music while he grabbed all the money then finally dropped down. He was a cool little kid.

There is a bit of controversy about this holiday that I’ll explain. In big cities like Bombay, the prize is up to 20,000 USD at each tower. Sometimes Bollywood stars or big companies give it. There are multiple towers happening all around town and LOTS of money up for grabs. You can imagine many people want a piece of that pie.

“In 2012, over 225 govindas were injured with one casualty; this was higher than the previous year’s 205. The government of Maharashtra banned children below 12 years from participating in 2014. The Bombay High Court later ruled in August that the minimum age should be raised to 18 years and height of the pyramid should be no more than 20 feet due to safety reasons. This was challenged by the organizers to the Supreme Court, which kept it on hold—allowing children above 12 years to participate.” 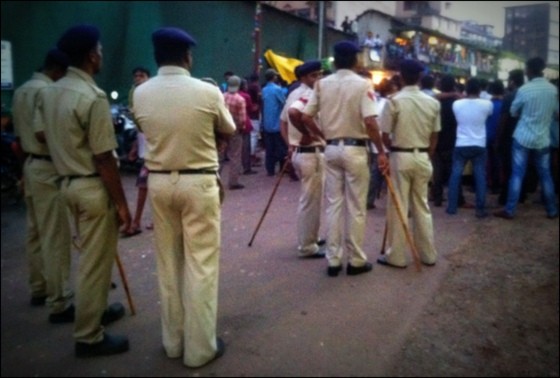 Because girls are lighter they are put in as the top kid oftentimes. The younger, the lighter = a better chance of winning.

The problem lies in families that raise kids to compete in this event each year. It’s their life. They practice and hope to win those millions. Some younger children work really hard each day practicing just to make their parents happy. Some call that child abuse and putting them in front of crowds to perform could be perceived as exploitation. There is an added factor of danger with so many injuries per year and occasionally deaths.

Personally, I think the ones in Mapusa were very cool. They weren’t too high and seemed decently safe. The kids partaking did look a little young but seemed SO happy to be a part of the celebration.