Seeing the endangered one-horned rhinos at UNESCO site Kaziranga National Park in Assam was a part of the Holiday Scout tour I was SO stoked about. Do you remember when I went to Langkawi and saw online about a Rhino Tour… and it turned out to be Rhino was a type of four-wheeler. I asked Sange with hesitation… “are they REAL rhinos?”. He’s like, um yeah? … Okay. Just checking.

What is so special about the Indian one-horned rhino?

Well any endangered animals deserves some attention and conservation efforts. 2/3 of the one-horned rhino population are here in INDIA! I think that’s incredible. It’s an Asian animal, and over-populated India is doing all they can to protect them.

“The Indian rhinoceros once ranged throughout the entire stretch of the Indo-Gangetic Plain, but excessive hunting and agricultural development reduced their range drastically to 11 sites in northern India and southern Nepal. In the early 1990s, between 1,870 and 1,895 rhinos were estimated to have been alive.. In 2015, a total of 3,555 Indian rhinoceros are estimated to live in the wild.“

There are a few types of rhinos in the world, but the India “greater one-horned rhino” is the one I’m talking about here. Recently, you may have seen 3 subspecies of the black rhino are now extinct. India is working hard to keep that from happening to these guys. 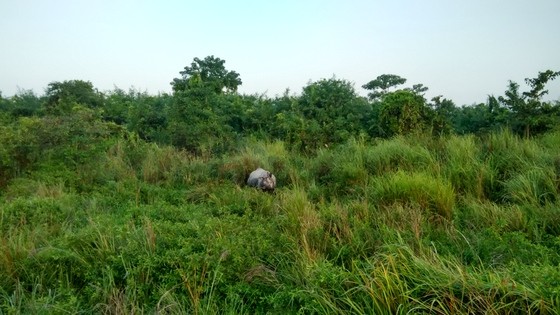 These rhinos used to be in Burma and China, but they have been hunted. Chinese medicine says that the horn can cure illnesses. It’s true that they are poached for that reason, but there is another reason these animals are endangered- they also have humans encroaching on their land.

Kaziranga National Park by far has the most rhinos at 1,855 with other parks each having less than 100, and it’s the main thing tourists come to see.

FUN FACTS: Indian rhinos are vegetarians and can run 34 miles per hour!

At one point there were only 12 rhinos in Kaziranga… hundreds were killed by British military officers. They seem to be doing a good job at helping the population grow now. 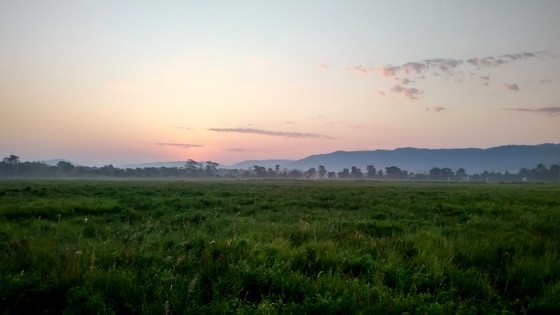 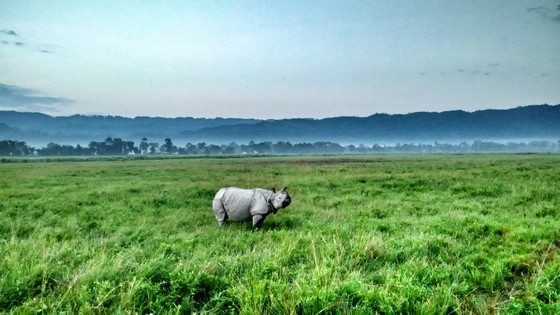 So, we were up SUPER early to see these things at the park and saw about 6 up close in the stunning sunrise. Later, we went on an afternoon safari through the jungle again to see “all the animals” which would mean seeing things from a little further away.

What else can you see at Kaziranga?

You can see water buffalo, all kinds of unique birds, swamp deer, pythons, cobras, elephants, tigers, leopards, mongoose, and more. It’s rare to see one of the wild cats at this park. The park is tall elephant grassland and marsh and flood park of the year. You need to visit outside June-August when the park is forced to close for the rain due to Brahmaputra river floods.

Me and Anna had a laugh when the safari guide pointed at what we’re pretty sure was an average chicken and said, “jungle fowl!” but what do I know.. maybe jungle chickens are different! 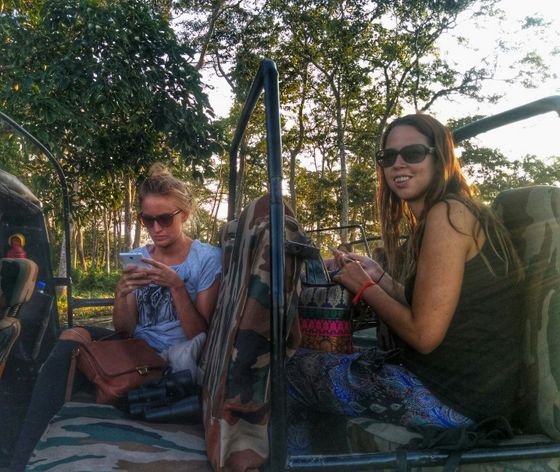 live sharing with your guys about the safari! #bloggerslife

How do you get to Kaziranga National Park?

It was a 10 hour (yes, 10!) drive from Itanagar, the capital of Arunachal Pradesh and our longest day driving on the tour. If you come from Guwahati luckily it’s only 3 to 4 hours by road. We did have some boys stop us for “road tax” which I found a little annoying (It’s basically extortion on the smallest scale. It’s 7 or 8 boys saying give me money for festival, or roads, or whatever lie, or else you cannot pass).

It’s annoying and I hate that tourists who come from Guwahati to the park will see this in India maybe right away and get a bad taste of the country. Not a good first impression! 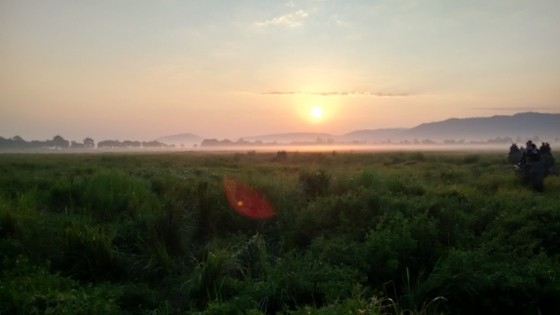 Where do you stay at Kaziranga National Park?

We stayed at Jupuri Ghar which I loved! It was cute and probably my favorite accommodation from the tour. Granted, the weather may have had something to do with it! We were nice and cozy here. 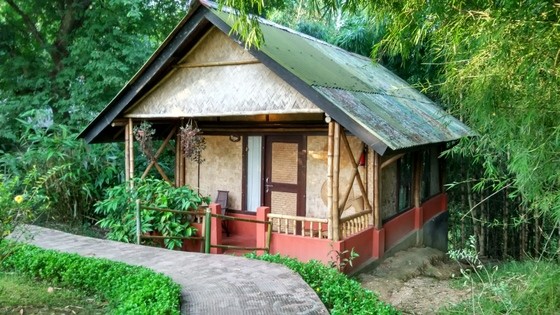 You can stay elsewhere. There are 11 places listed on TripAdvisor but there aren’t many reviews. All I can really say for advice is that hotels in NE India aren’t all that (yet… tourism in NE India is growing!) so it’s better to save cash and stay at a B&B or eco resort. Hotels are very basic with just a bed and shower, so why not have a bed and shower in a super cute hut!?

I’m not going to list the prices because they are always changing but you can expect that foreigners will pay a lot more than Indian Nationals. The entrance fee only needs paid once then you can come and go as much as you want but each safari then will cost more. Dress in clothes you don’t mind getting dirty and don’t go off on your own… pythons and tigers remember!?