The hippie made it to the Raffles & I’m going to share my Raffles Singapore review! Okay to be fair, I have had a massage at a Raffles before (in Instanbul) but I had not yet laid my head on one of their immensely oversized pillows in their giant King size beds. Now, I have and like that time I was bumped up to business class on British Air, I have now seen how the other half (or 1%) truly lives.

If you missed last weeks’ post, check it out to see why we were in Singapore and what we got up to.

I suppose you’ve already realized I love the place but I’d like to share a few photos and show you what you can expect when you stay at the Raffles Singapore hotel. It’s one of the most iconic and historical buildings in Singapore and dates back to the East India trading company, hence it being named after Mr. Raffles.

Back then there were Indian workers in Singapore and you’ll notice Indian touches at the hotel – for example the Tiffin Room where you have High Tea. Tiffins are “lunchboxes” Indians used for work. We actually thought the hotel reminded us a lot of Taj properties, one of the best chains in India. There are a few must do’s in Singapore and awesomely two of them are right in the Raffles hotel! See my favorite things to do in Singapore in this post.

Tripadvisor puts Raffles High Tea at the #2 coffee/tea place in the country. The second big thing is having a Singapore Sling where they were invented- right here! They were made because us ladies wanted to drink too – but it wasn’t classy- so an awesome man invented this so it would look like we were drinking fruit punch of sorts. The High Tea was very fancy. In fact when Ben walked in he realized he should go back to the room and change into his button up shirt instead of a t-shirt. While there were regular High Tea offerings, there were also a few bits of local food like dumplings.

We stayed in the Palm Suites room which came with Butlers (yes, I swear). Of course, we only called them once. That was at 8 am when I woke up with a crashing hangover and no water. I called for four bottles. I could have drunk the sea at that point. Our lady butler came in and could tell I’d had a late one… okay, maybe it wasn’t 8 am, it could have been about 130 pm. She said I should flush my system and have some chamomile tea. I liked her! 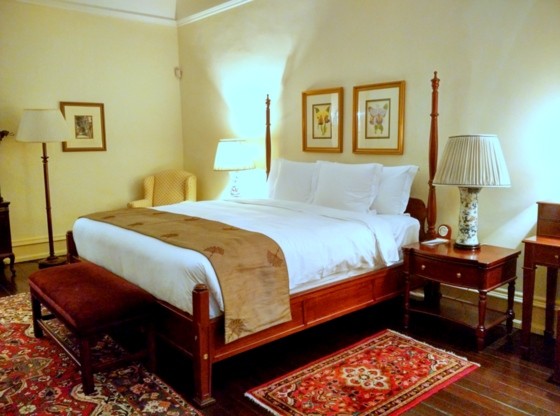 They gave complimentary fruit baskets, water, tea, and coffee (but not the glass bottled water, it’s $14). The rooms had a little living area, bedroom, and bathroom with a tub. We were given the “writer’s room” which was really adorable. Definitely historical, these rooms were rooms of the past which I LOVED. The wood was all dark, there were shutters separating rooms, and the writers desk and vanity were so cute. Ben had a bath (because British people love that nonsense) and I of course didn’t because that’s like laying in a hot water pool of your own dirt and I can’t understand it unless you shower first. Overall, it was a great experience and if you’ve got the budget for it you should absolutely crash here. There is a great rooftop pool, exercise room, a lobby filled with fresh flowers each day, and 14 restaurants and bars on site- including the famous Long Bar where you have the traditional Singapore Sling. 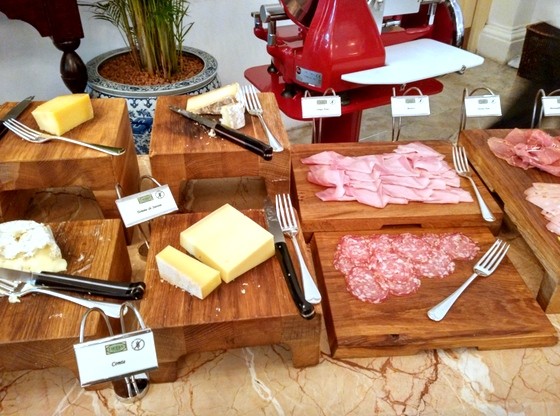 I stayed at the Raffles as a guest and was not compensated or requested to write a positive review for them. All opinions are my own. It’s the Raffles- I mean, WHO has a bad thing to say about them!?