My day at Universal was the BEST day of my life and is the coolest thing to do in Florida. Maybe I’m exaggerating a little bit, but it was the best day in a long time. I was like a kid in a candy shop. I held back happy tears on the Escape From Gringotts ride. Here’s how I spent one day at Harry Potter in Universal in both parks and also stopped by some other top attractions at Universal. 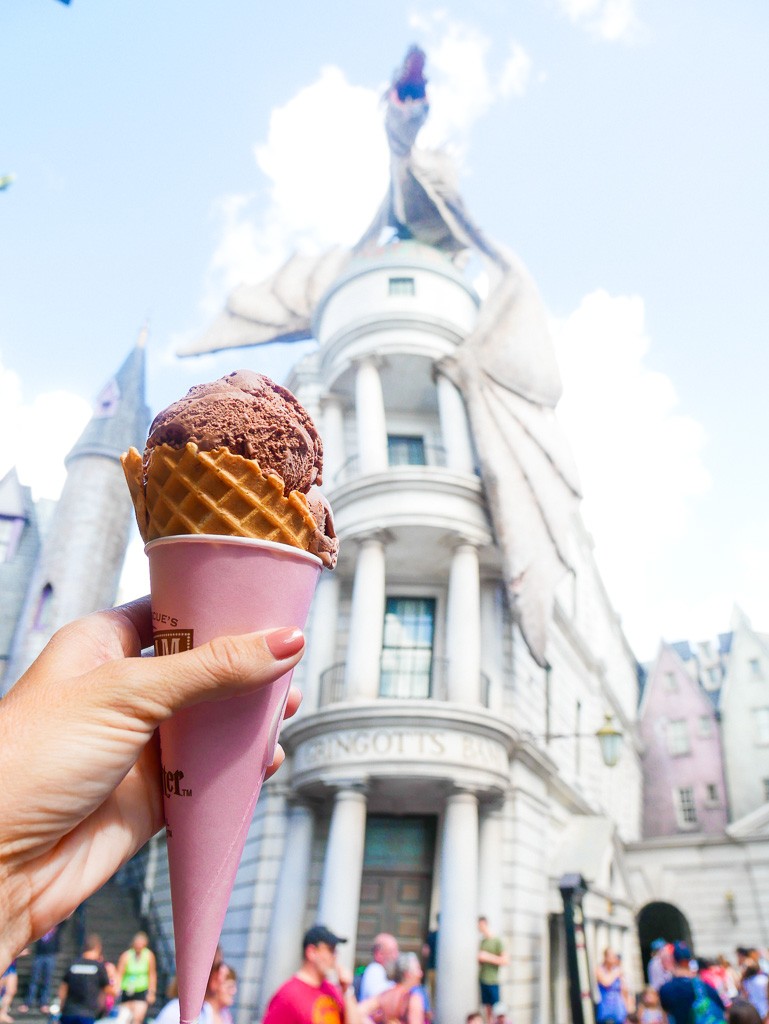 So the first thing you need to know is that all things Harry Potter are NOT in one place. There are two parks in Universal: Islands of Adventure (where Hogsmeade is located & Hogwarts) and Universal Studios (where Diagon Alley is). The Hogwarts Express connects the two parks from one Harry Potter land to the next without ever breaking character.

When you arrive GET A MAP. It’s so important to make sure you see and do everything you want. I really wouldn’t wing it if you have certain things you don’t want to miss.

These two things are the most key things there are. Basically, you can buy express passes to cut in line. I had them for free because I was a guest of the park so that I could blog about it. Express passes are NOT USABLE on a few things, most of which are Harry Potter: Hogwarts Express, Escape from Gringotts (Universal Studios), and Harry Potter and the Forbidden Journey (Islands of Adventure).

So, what I did was get there right when things opened and go to Universal Studios side first. I went straight to the Escape from Gringotts and only waited about 10 minutes.

What I would do differently is instead of enjoying Diagon Alley now, I would have jumped right on the Hogwarts Express and rode over to Hogmeade and rode the Fobidden Journey. When I got there later, the line was an hour long and it was 100 degrees. I was riding alone (but the single rider’s line which is way shorter skips all the fun going through the castle to the start of the ride).

From there I would have stayed in Hogsmeade and done the rest of that part of Harry Potter, then explored Islands of Adventure, then exited the park there and re-entered on the Universal Studios side (you just walk around a pond, it’s no big deal). Then explored Universal Studios and been over there for their nightly fireworks.

Harry Potter on the Universal Studios Side: Diagon Alley 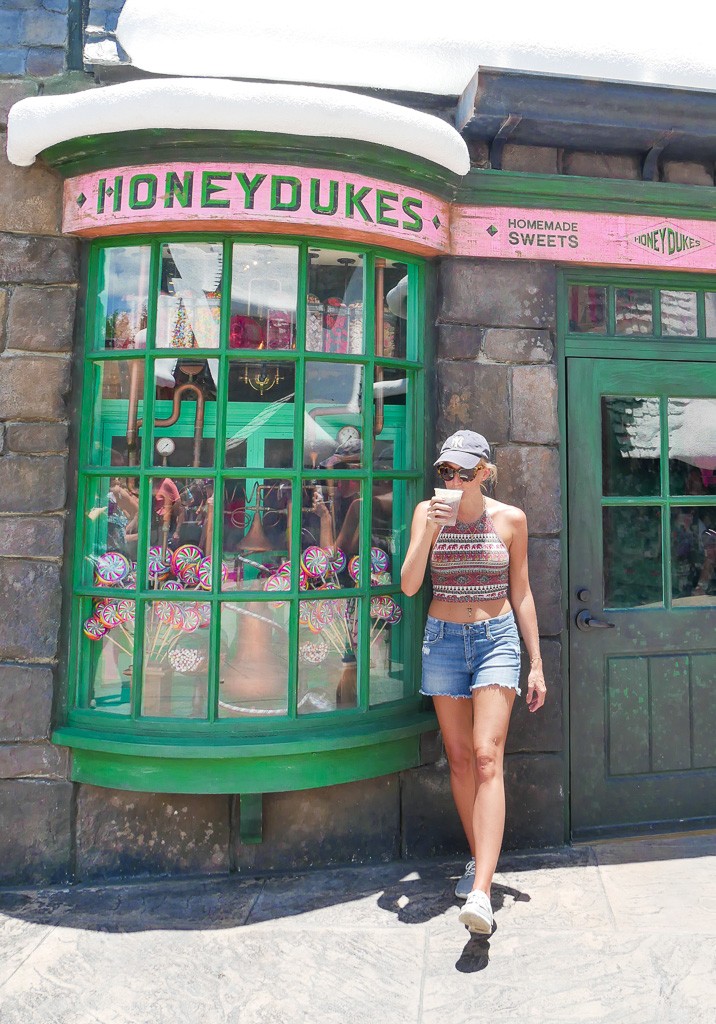 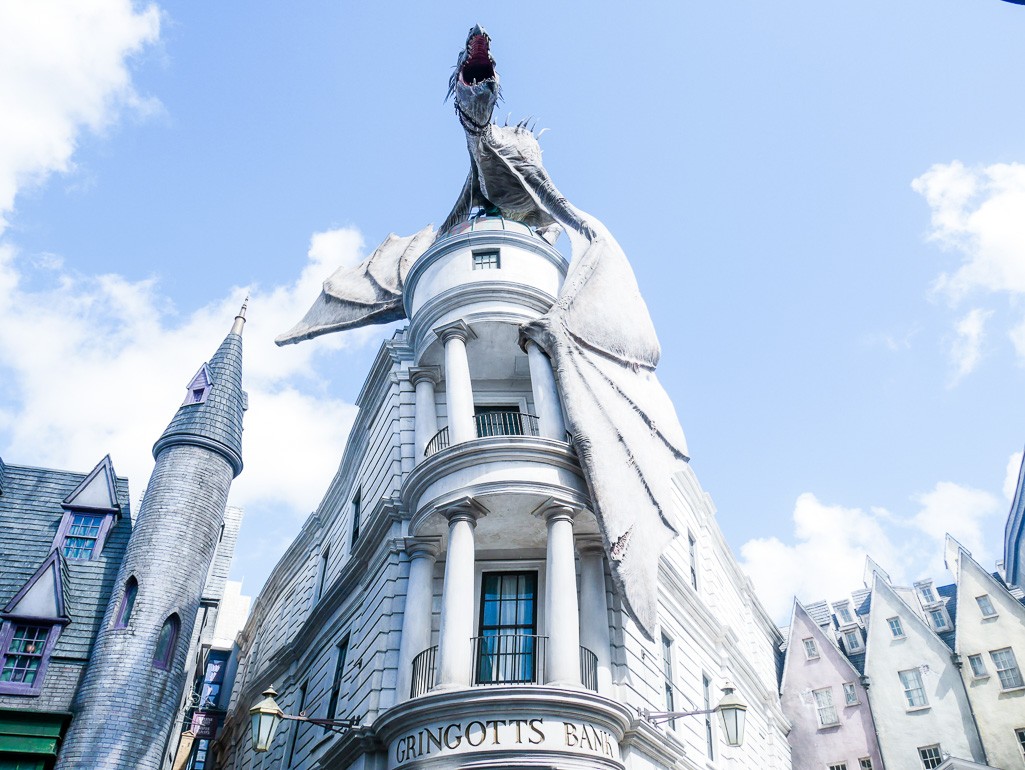 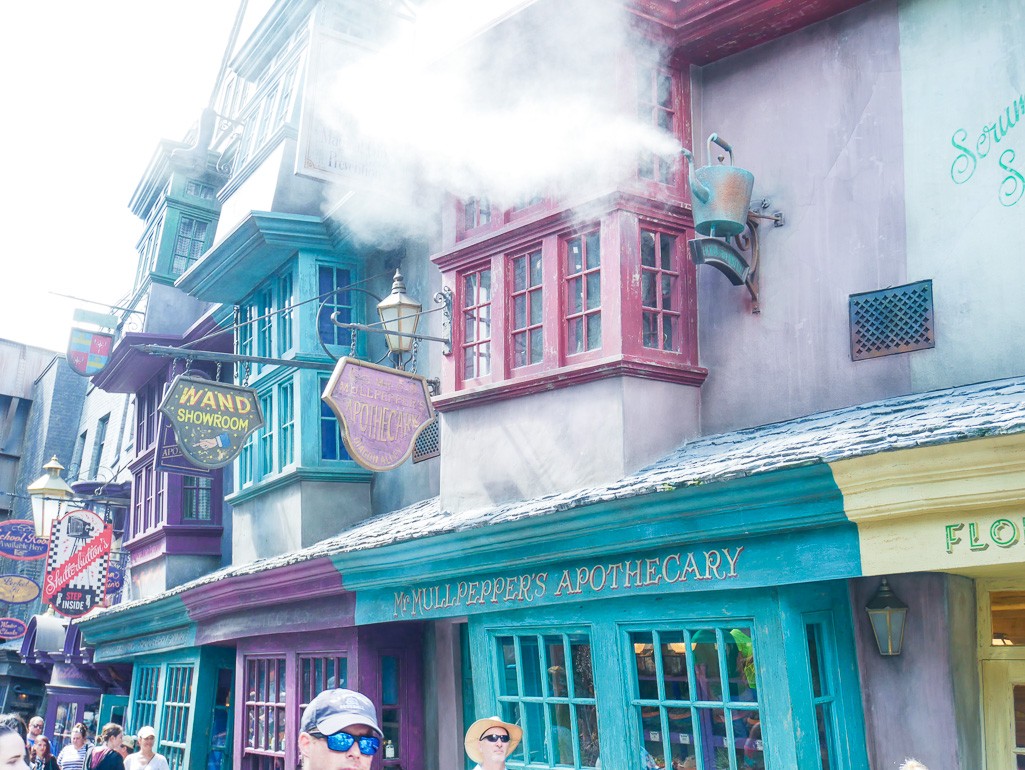 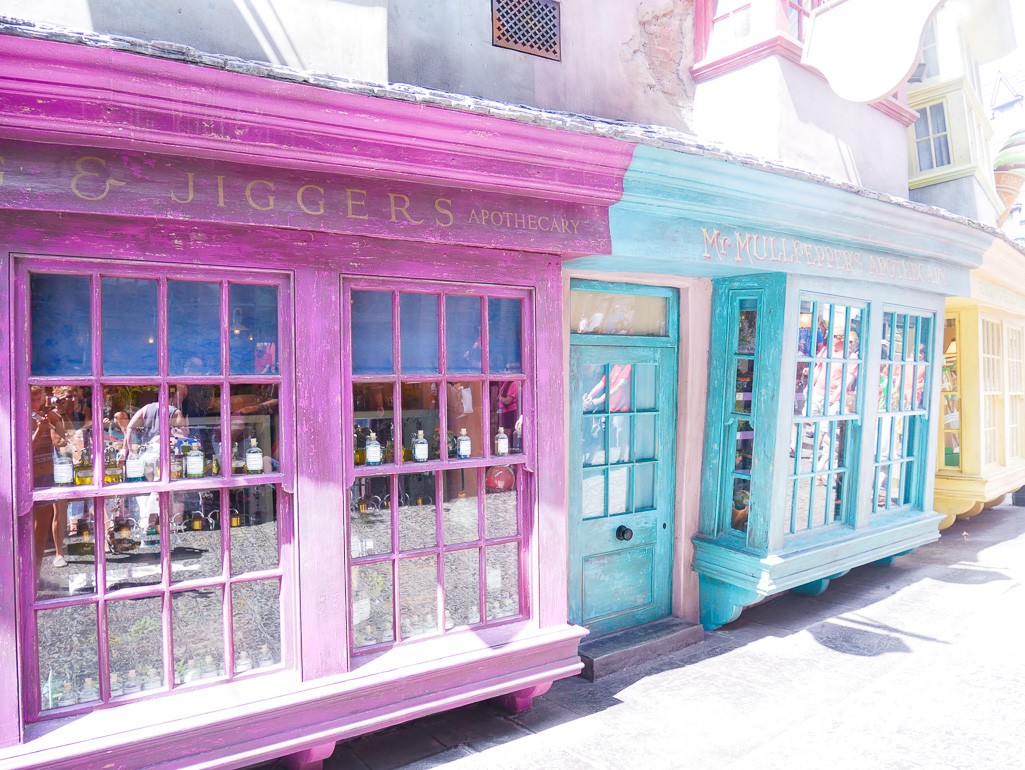 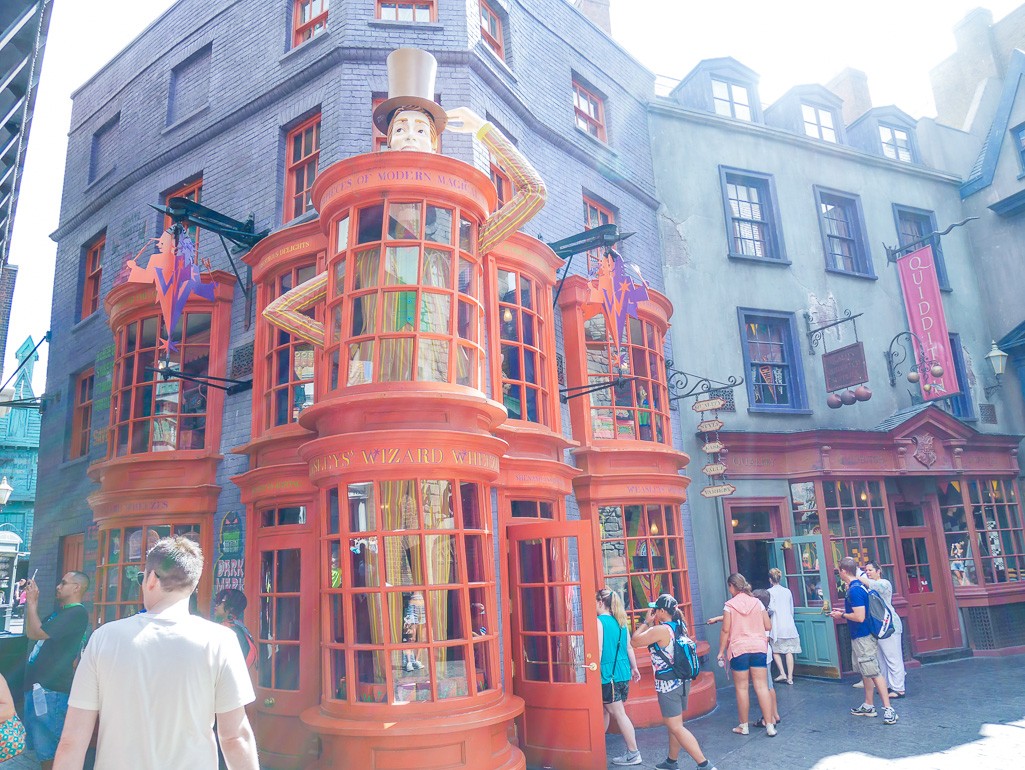 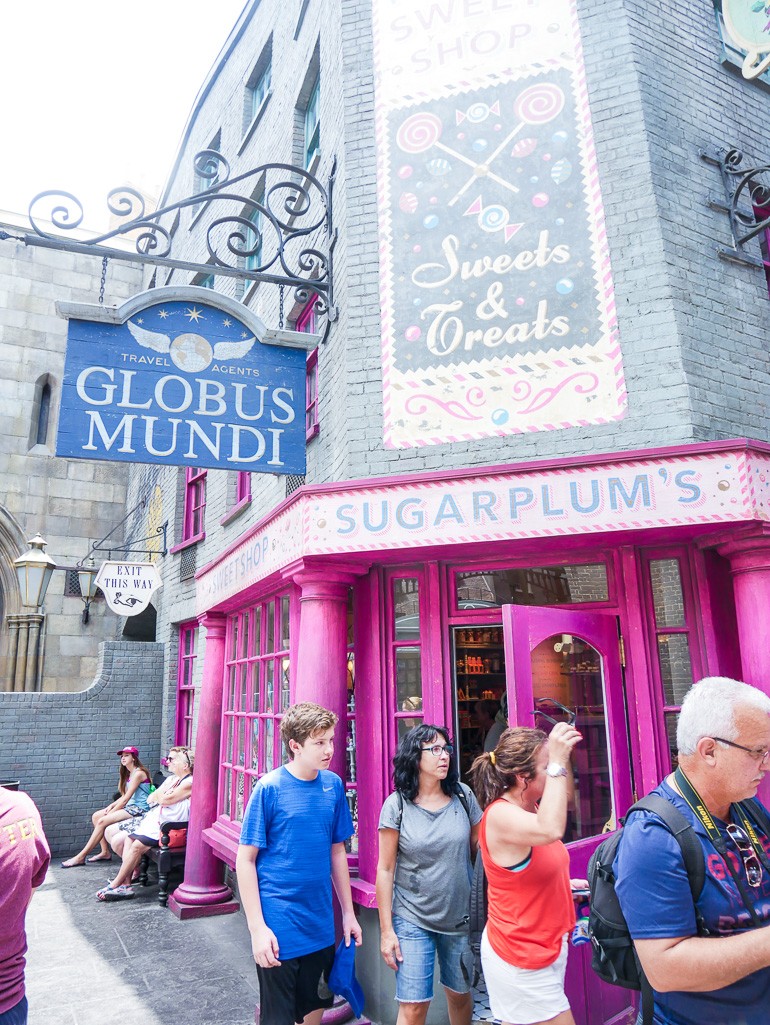 It’s so cool. Really, it’s amazing. As you walk through Universal Studios, go all the way to the back of the park. Things will start to get a little English until you realize you’re in London! You’ll see the Knight bus (take your photo with the conductor) and all things Harry Potter like King’s Cross (enter to take Hogwart’s Express) or Diagon Alley!

Once you’re in Diagon Alley and feeling like you’ve never been happier you can do the following:

Harry Potter on the Islands of Adventure Side: Hogwarts & Hogsmeade

I was pretty hot and tired by the time I reached here and it was PACKED. I mean, you got off the Hogwarts Express and couldn’t hardly see past the people. Granted, it was a Saturday in late June.

So, here you have the castle where you’ll want to ride the Forbidden Journey. I didn’t as mentioned since the line was so long. I did go on the Dragon Challenge, a fun coaster, which I didn’t even need my express pass because the single riders line was empty. ALWAYS CONSIDER DITCHING YOUR FRIENDS FOR THIS LINE, LOL. Flight of the Hippogriff I skipped as it was more for kids I think.

So, as you can see here is more rides which Diagon Alley is more experiences. The parks are the same with Islands of Aventure being more for rides and Universal Studios being “in the scenes” experiences, so it makes sense. 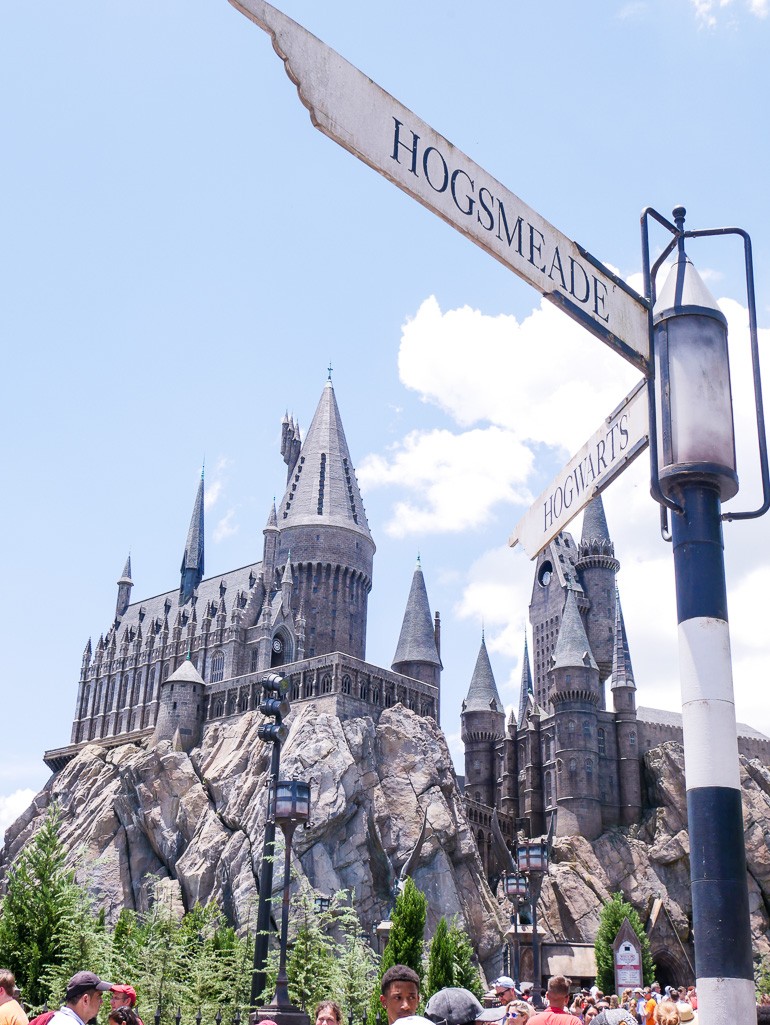 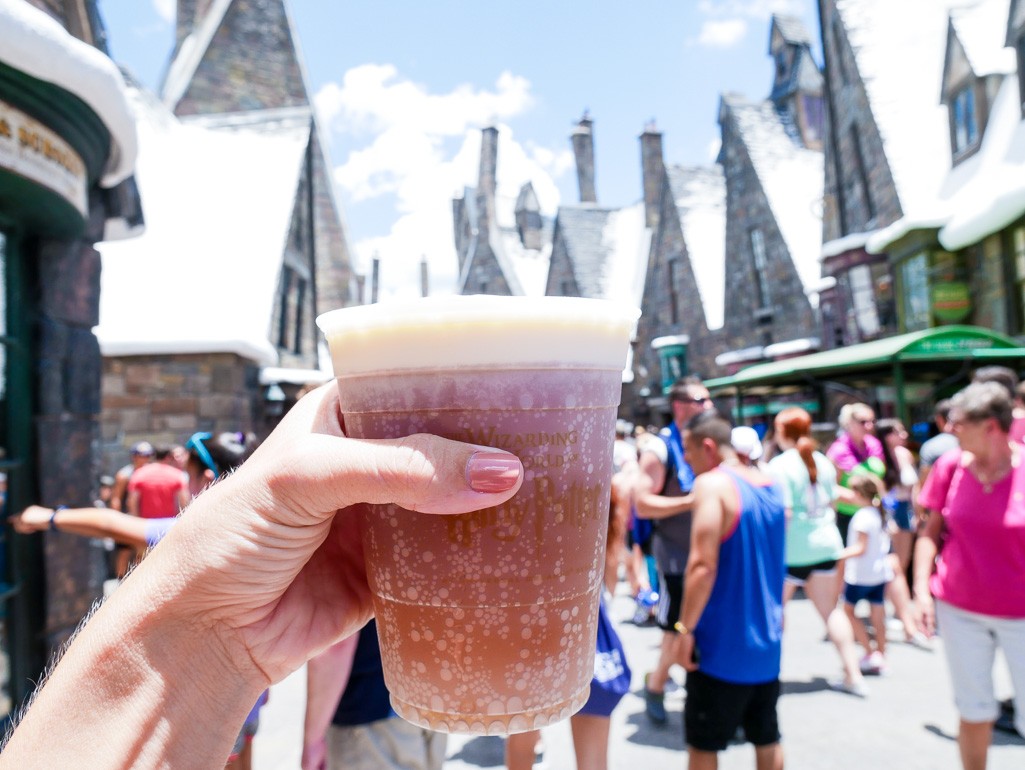 I made time to visit other parks of both parks, too. Some places were top of my list so I focused on them, first!

My favorite is Springfield. These are both in Universal Studios. So, I walked around that whole park by going out of Harry Potter, left, and going to the Simpsons. I got a Donut, saw Duff’s and Moe’s and Krusty Burger and moved on. 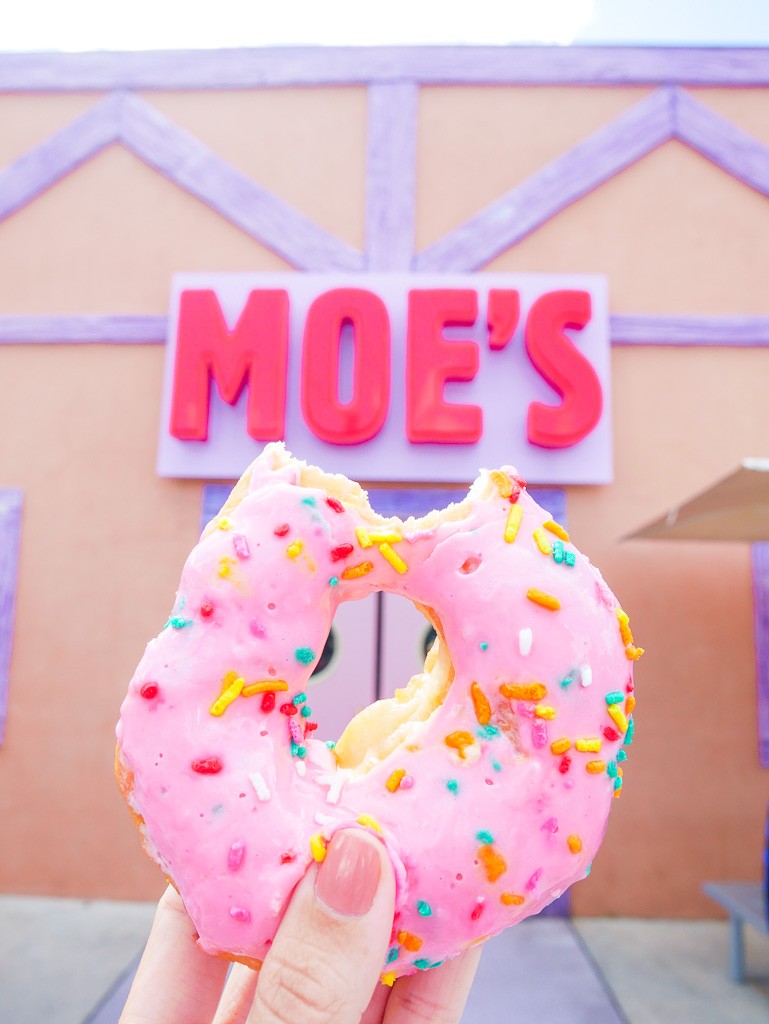 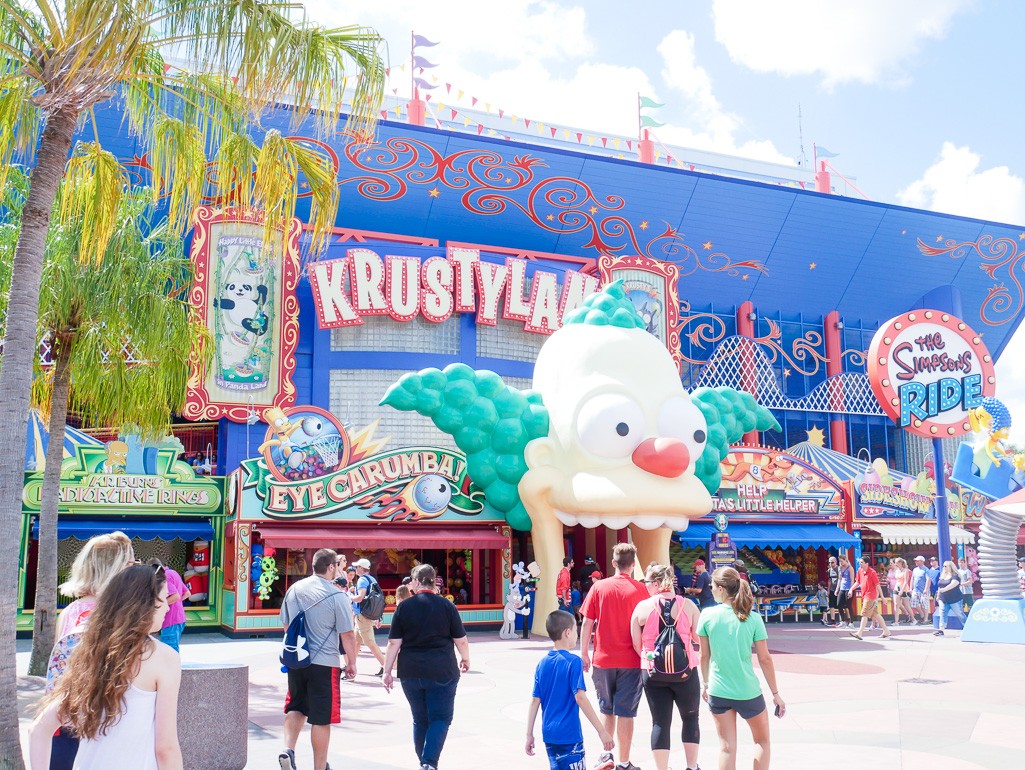 In this park, I thought New York, Hollywood, and San Fransisco were cool, but I wasn’t into exploring them due to lack fo time. I obviously skipped the KidZone. That left the rides near the entrance in “Production Central” and rode the Despicable Me Minion Mayhem here. I then skipped with the single riders line on the Hollywood Rip Ride (very cool, you choose your music and I chose No Doubt Hella Good). I felt a little hot and woozy so skipped the other rides, Shrek and Transformers.

I really liked Suess Landing the best. It’s sort of for kids but a really cool wonderland and fun to walk through, although the ride there is just for kids I think. 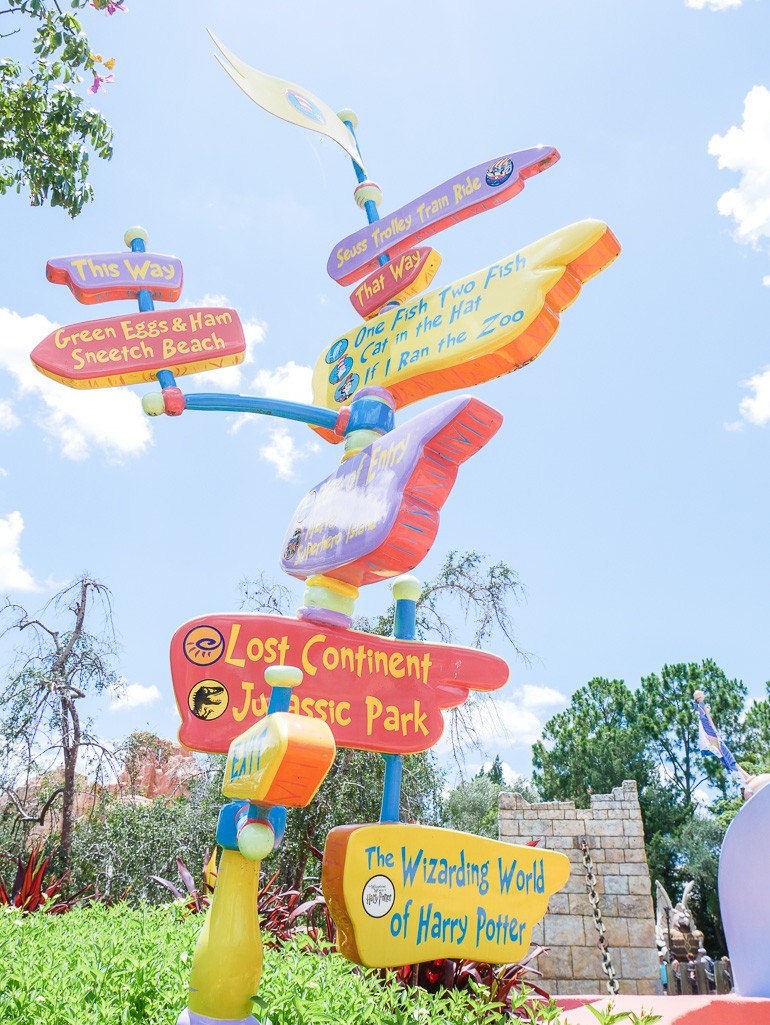 I was pretty tired of rides, really, but enjoyed exploring in The Lost Continent and Jurassic Park a lot!

There’s also Skull Island, Toon Lagoon, and all the Super Hero stuff. There are rides for all kinds of things, like E.T. but I couldn’t’ even find E.T on my map let alone in the park.

This park is bigger and more crowded that Universal Studios. That’s part of why I would have done things differently: Universal Studios first just to ride Gringotts, then take Hogwarts Express to Hogsmeade in Islands of Adventure, explore this park, then go BACK to Universal Studios!

Don’t forget there’s also now Volcano Bay, a 3rd Universal Park. You HAVE to get a PARK HOPPER pass to do BOTH parks. Then buy a ticket for Volcano Bay separately. You cannot take the Hogwarts Express unless you have a park hopper pass! If you want to do one day at Harry Potter in Universal then you need to go to both parks and get the Park Hopper pass. Do NOT forget I.D. to enter the park! So many crying people outside who forgot and didn’t have the credit card they booked with (because their parents booked it!). 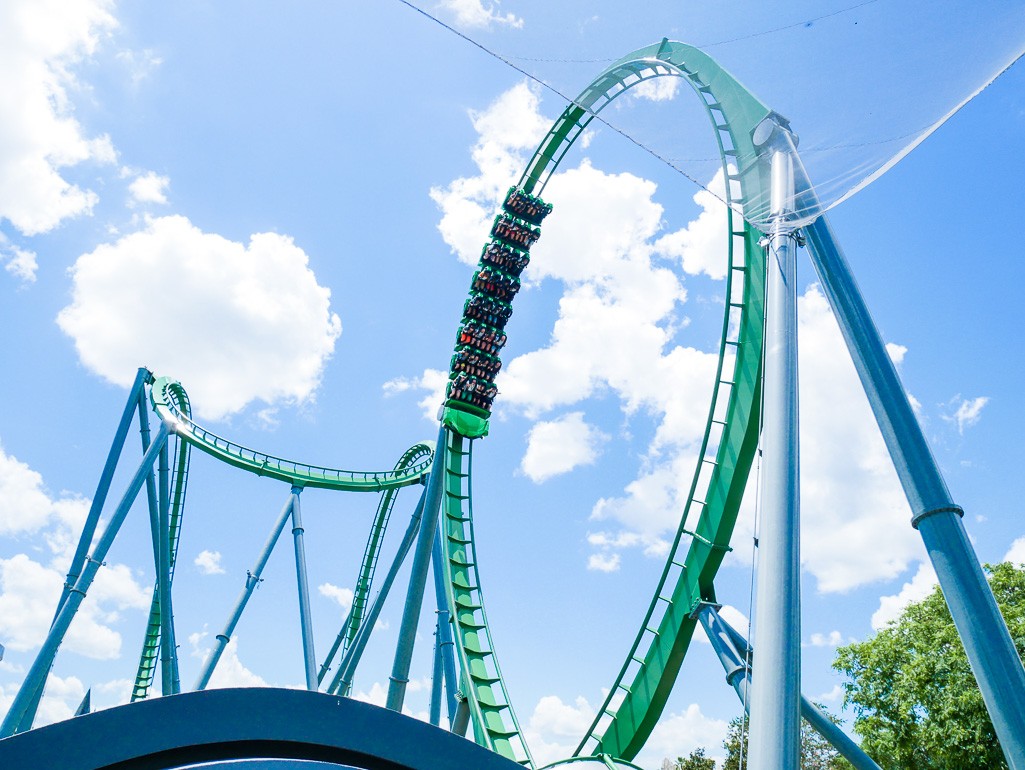 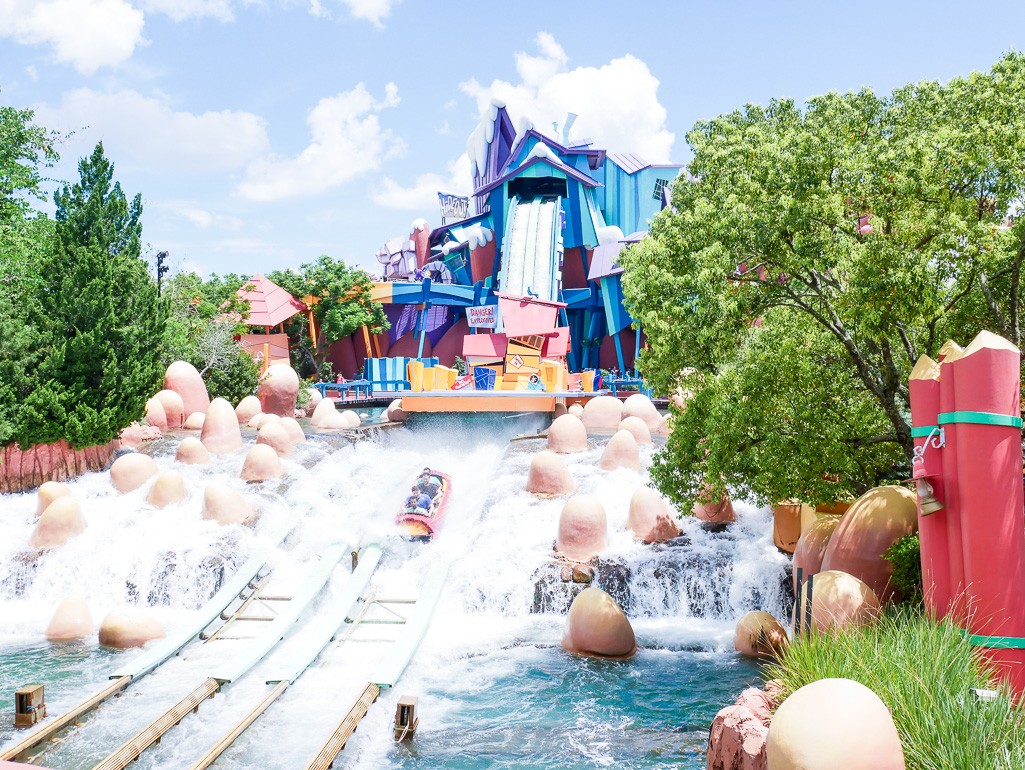 Pin one day at Harry Potter in Universal for later: 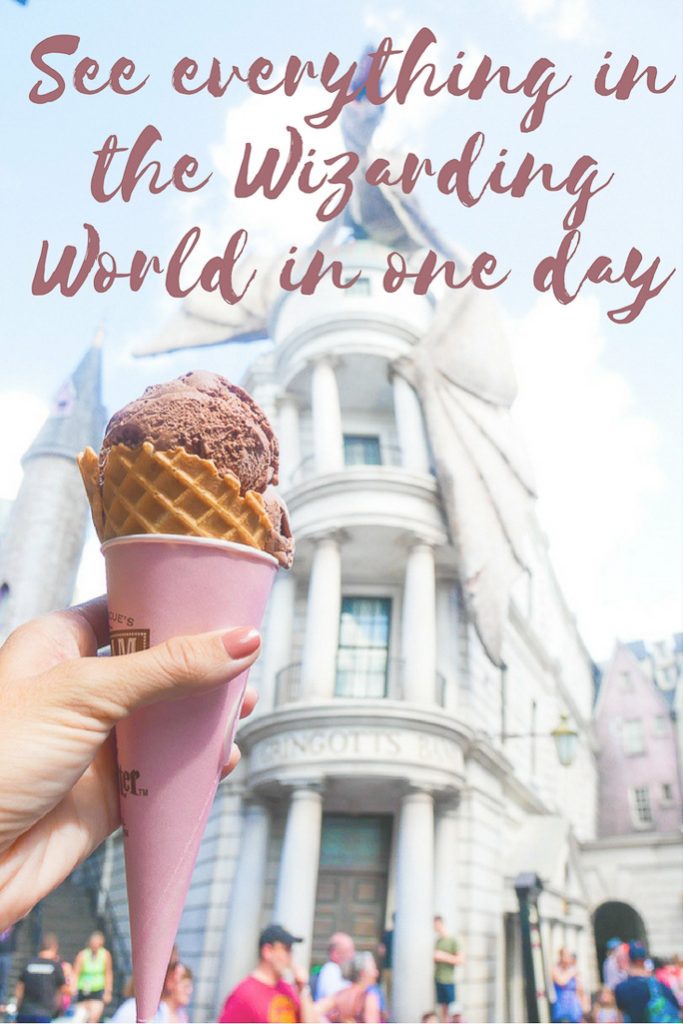 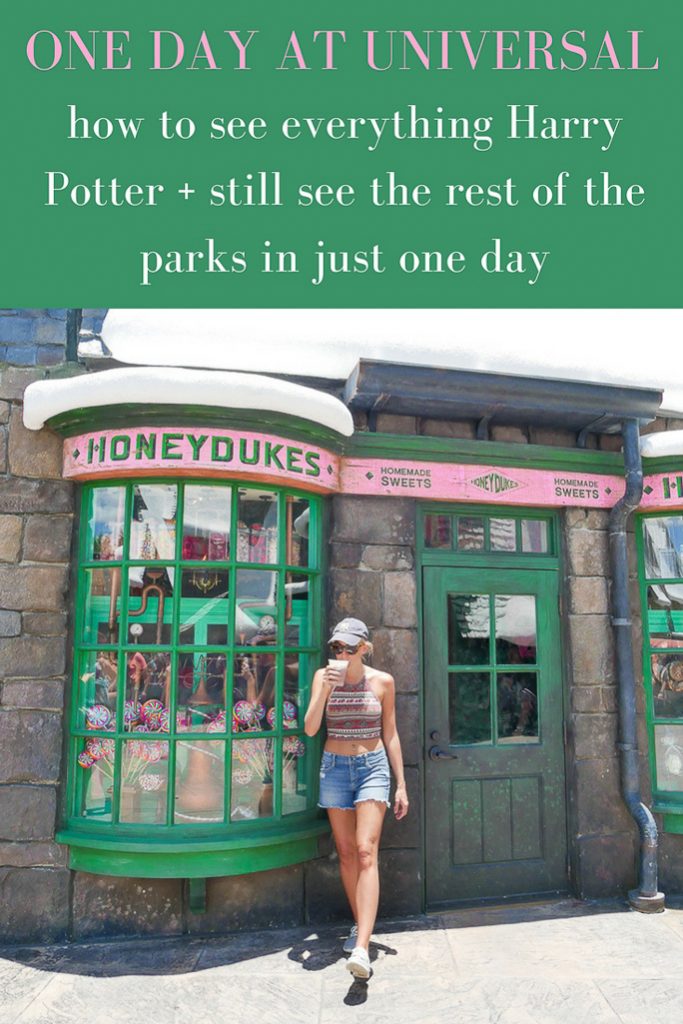