A Better Option than a Prepaid Taxi in India

Everyone and their mother say when you get to the airport, be safe and take a prepaid taxi in India- this way you won’t get ripped off by the shady drivers outside the airport. In some ways they are correct, but what they don’t explain is not all pre-paid taxis are the same.

UPDATE: Uber is now in India. Read how to use Uber in India here.

My tips for taxis in India.

When you take a pre-paid taxi in India it’s sometimes a huge scam. Definitely at the main two offices in Bangalore and a couple in Bombay that I’ve personally tried (having already known the fair rate). Be sure to choose MERU, Easy Cabs, or others that still use meters in combination. Technically this isn’t prepaid. You tell them your destination, which is put on the ticket.

You’ll pay a fee of 50 rupees to “leave the airport” and be given a ticket at the counter that you’ll hand over to the driver. You just wait curbside for the car with the license plate matching your ticket. The driver will turn on the meter and you’ll have a fair priced ride wherever you’re going. Best if you follow along on GPS. 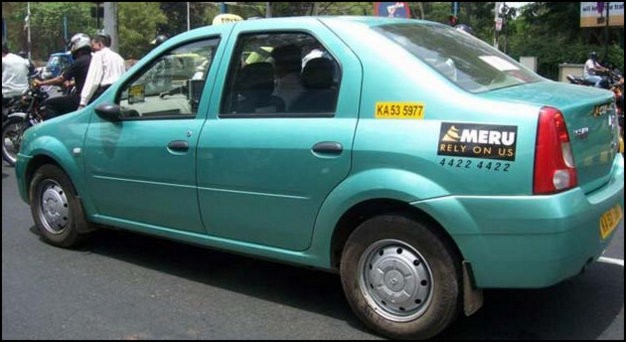 Other pre-paid counters that you DON’T want to use work like this: You tell them where you’re going and they give you an outrageous price to get there. This might be lower than the touts outside but it usually isn’t. Ever since I’ve seen how much higher they are than metered, I never take these options, even at airports. I have never heard a quote that wasn’t a rip-off.

Other options are risking finding your own outside. At some airports, only certain drivers are allowed in airport areas and they have what could be called a monopoly on the price. They won’t undermine each other.

If you walk a bit away (it’s the same at bus and train stops), you can find drivers that you can negotiate with to a fair price. You can get a rickshaw at a very low price, and a bicycle rickshaw ever lower! 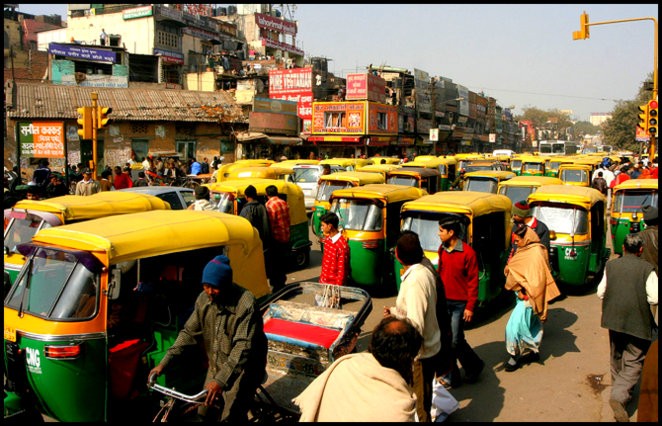 As you can see, the easy reasonable way is to take a metered cab, but even so, getting a ride from the airport will always be a little higher.

When traveling around besides the airport, rickshaws are fun, breezy, and incredibly inexpensive. You can hire a care for a day, but just find a trustworthy drive and make a deal exclusively with him. Through an agency, the driver isn’t getting much money; the company is- and you are being ripped off.

FYI if go through a toll, it is your responsibility to pay. But if a driver asked for “gas money” don’t give more. Like anywhere else in the world that is included in the rate! Of course! Unsurprisingly, I have had two drivers stop for gas and ask me to help pay.

UPDATE: After a couple years of living in India, Uber came here and I am only now remembering to update this post. Uber is in many of India’s biggest cities and is probably the BEST way to get transportation, even from airports. Here’s what you need to know about Uber in India. You do need a local phone number/WiFi (tips on getting internet in India here).

Finally, I think I’m done sharing my tips of transportation! You’re probably sick of reading about it by now, but it’ll be good as a reference when you plan a trip to India later!  Wink, wink.

I have more tips for Indian transport like staying safe on buses and trains, How to book a train, including which class and explaining the tourist quota and tatkal, as well as how to decide to take a sleeper bus or overnight local.

If you’re a solo female traveler I have a post on staying confident and fourteen safety tips for traveling India solo.