It’s another week I have nothing to share because I’ve been sick. So I’ve decided to share a bunch of photos from the last month here in Goa! 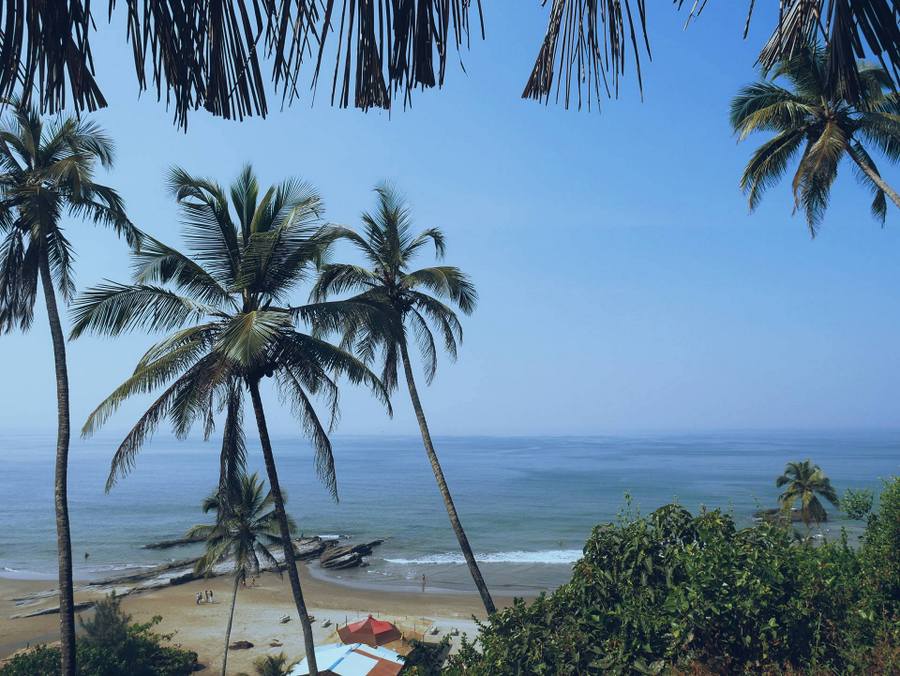 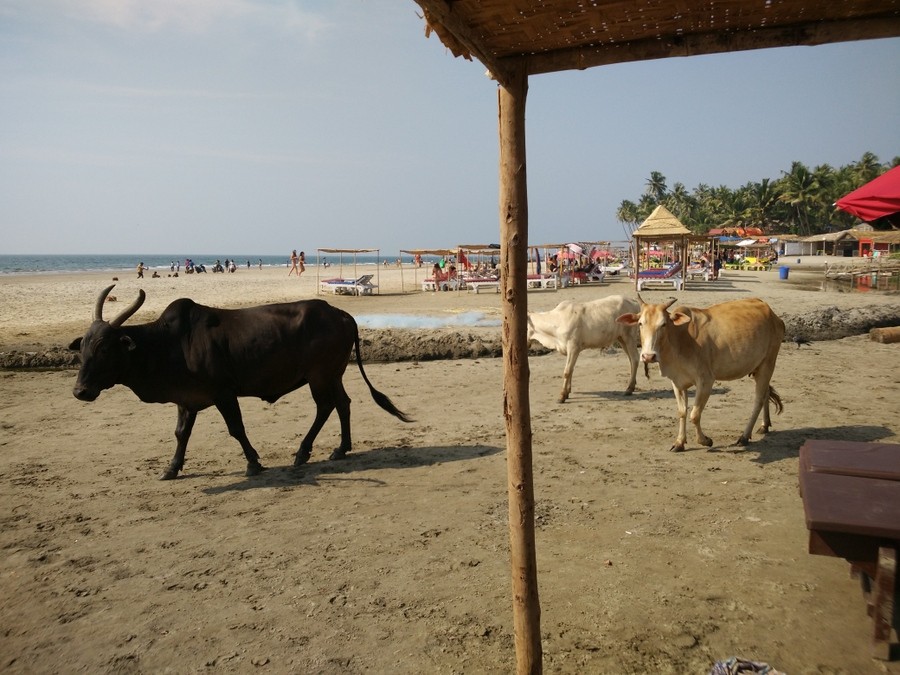 Yeah there are a lot of cows on the beach. Usually harmless. Except when dogs chase them – they actually can be really scary then! A whole group of cows running along the beach! People have to go grab their playing babies out of the sand. This is one of those things you scoop into the air and it fills up then you roll it shut. The company Cloud 9 sent me one while I was in America. It’s cool. I want to make an anchor then I can plant myself in one spot and take a nap lol. 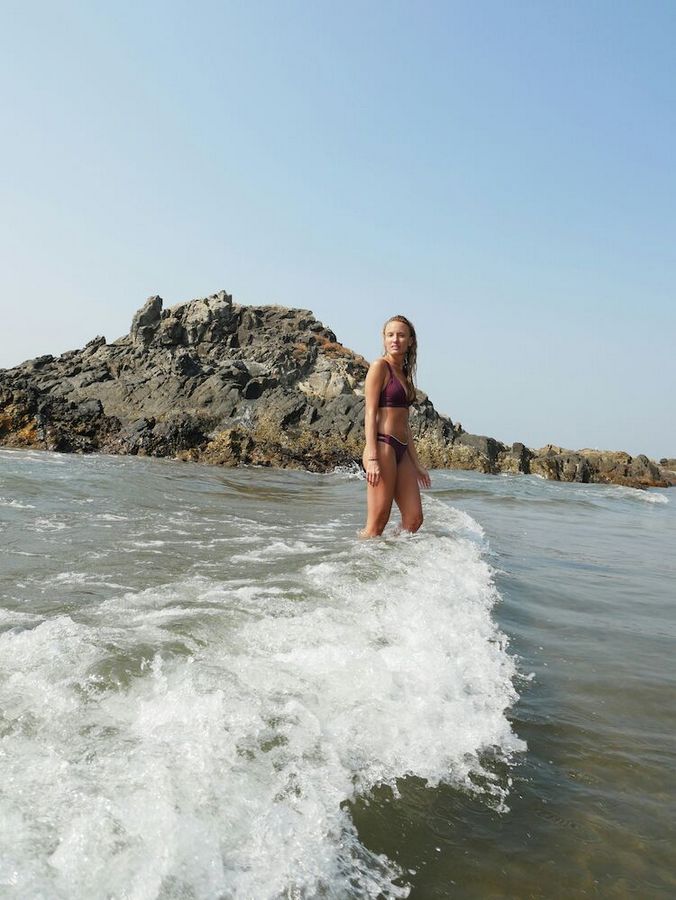 Tia has a new bikini collection out so took some snaps of me in them for her Instagram. 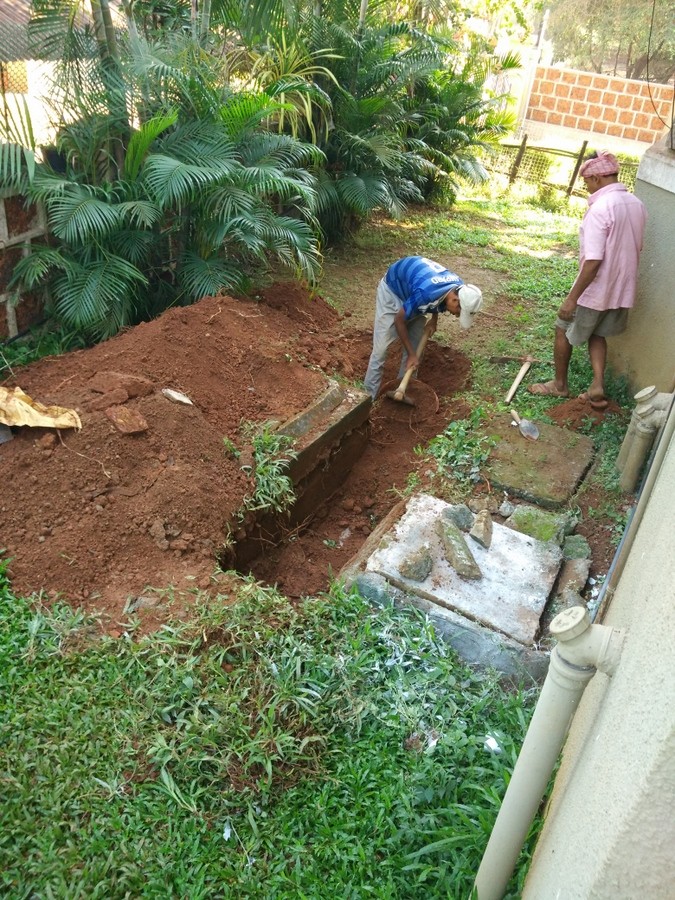 We have some problem with our sink smelling. I told Ben I was going to get it fixed while he was out of town. My thoughts? Call plumber who will probably pour some Draino down the sink.

The thoughts of plumbers? Tear open the entire garden. I asked questions I swear but there was zero English communication going on. I sent Ben this pic to Ben and he’s like WTF are they doing? I’m like Ben, I have zero idea. I’m just seeing how it plays out! ha, so one week later the sink smelled again. I don’t know about this.

But the cat liked all the extra dirt. 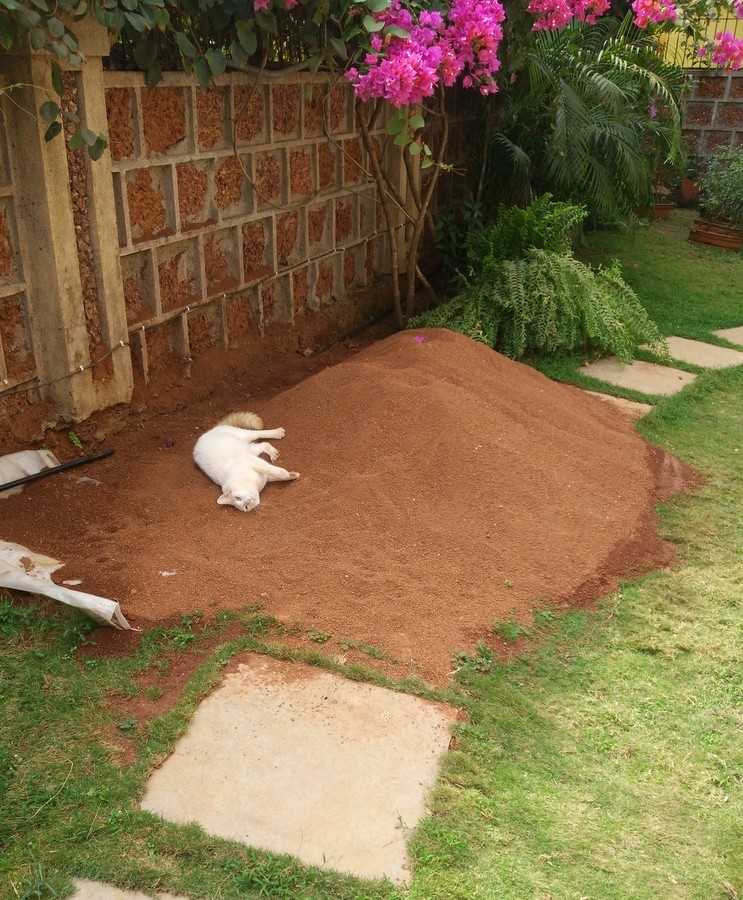 The animals are good as ever and none have been sick recently. I’ve heard of some people’s dogs getting snake bites around here so I do need to get the grass cut (well hire someone to do it anyway). 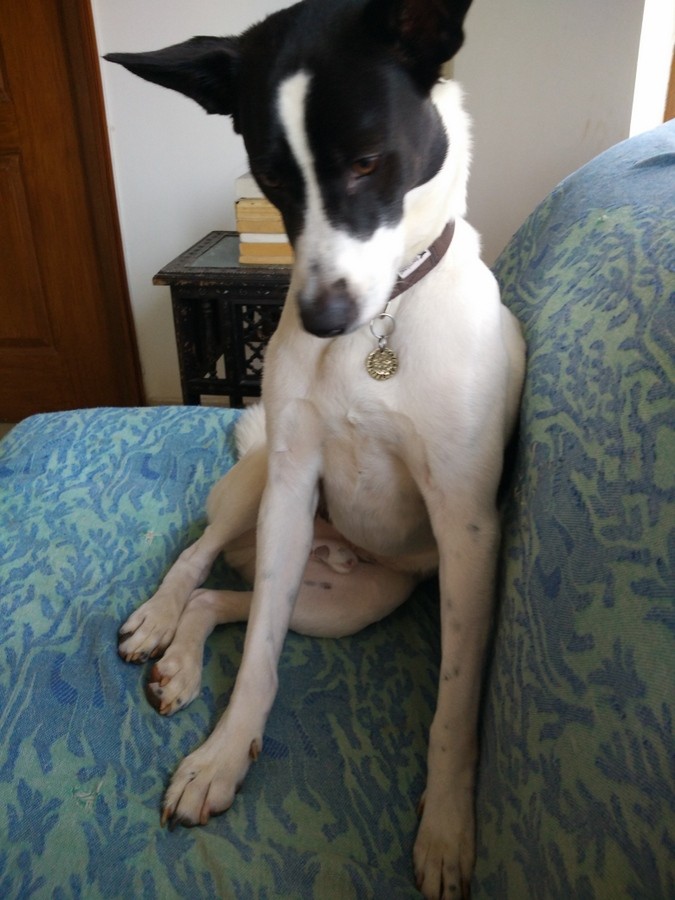 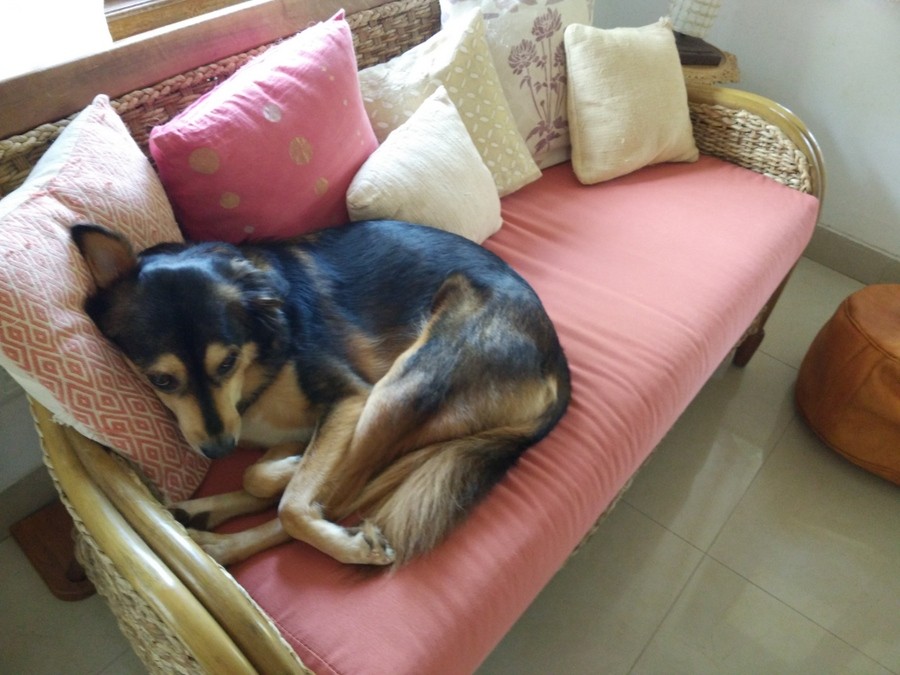 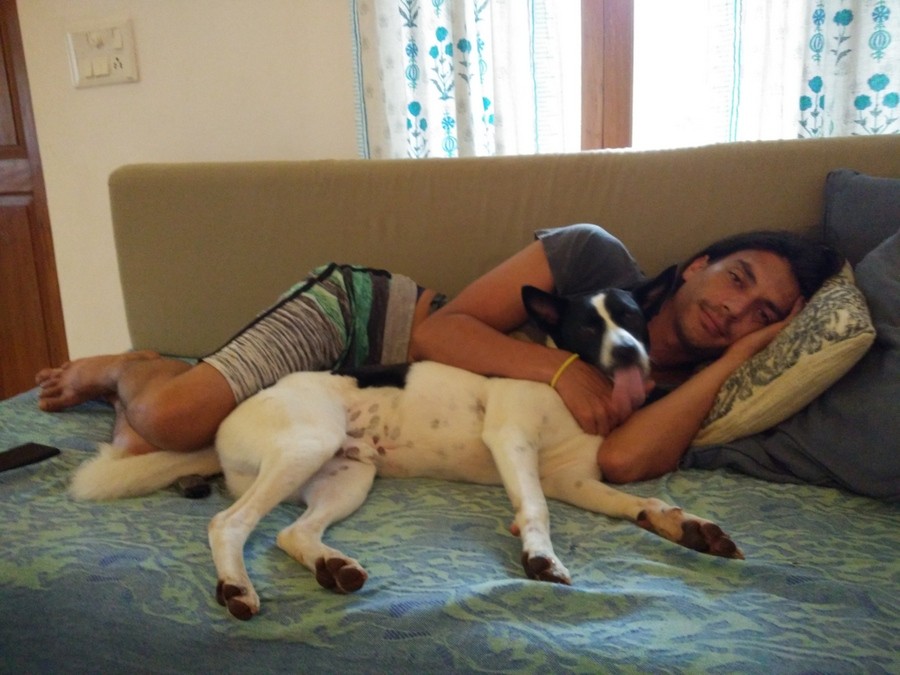 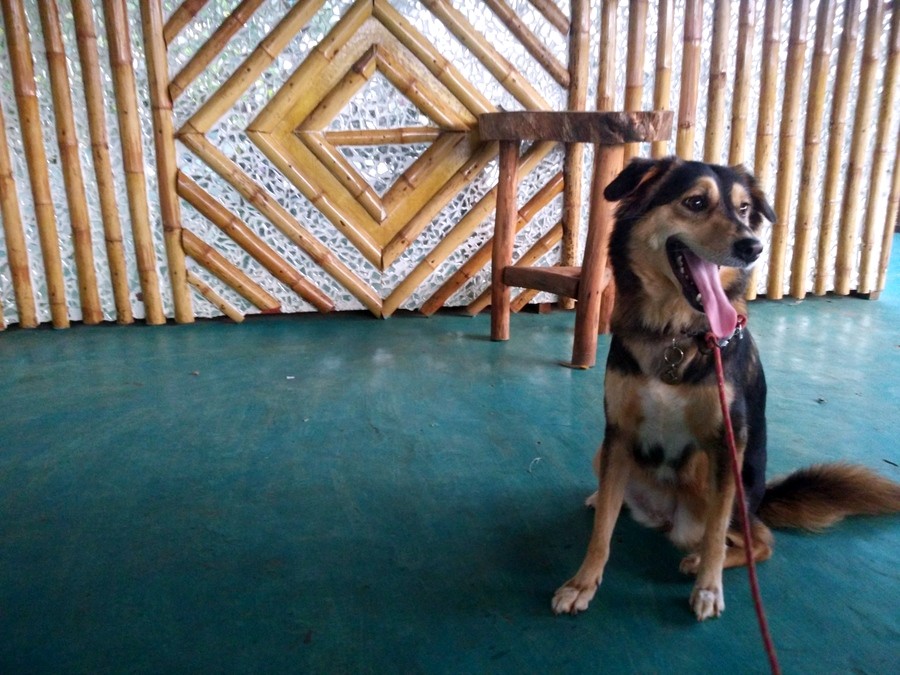 Driving in India is as fun as ever. Ann took these photos while she was here. Not the most flattering but shows how cows and ox are just part of the road here. You can see him next to my car through the window. 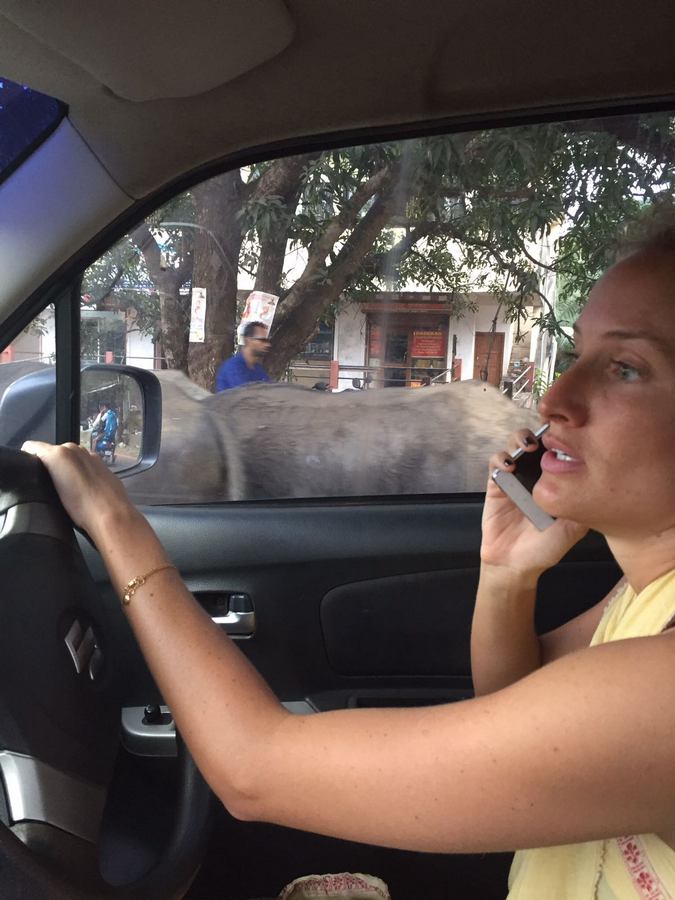 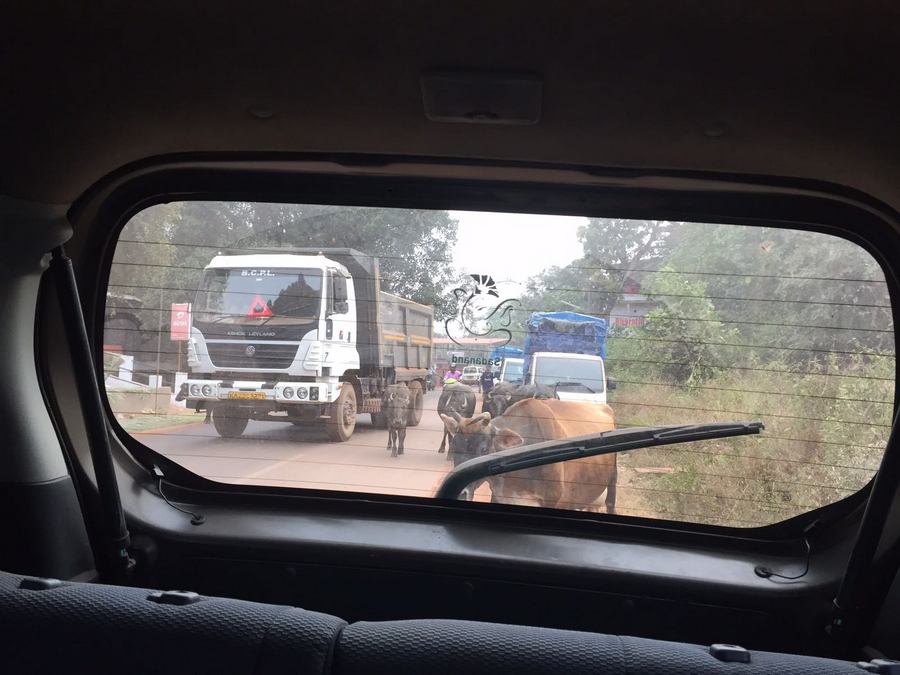 Little kids ride in Omni’s to school here. We have an Omni! It looks like they’ve been kidnapped but it’s just the school bus. 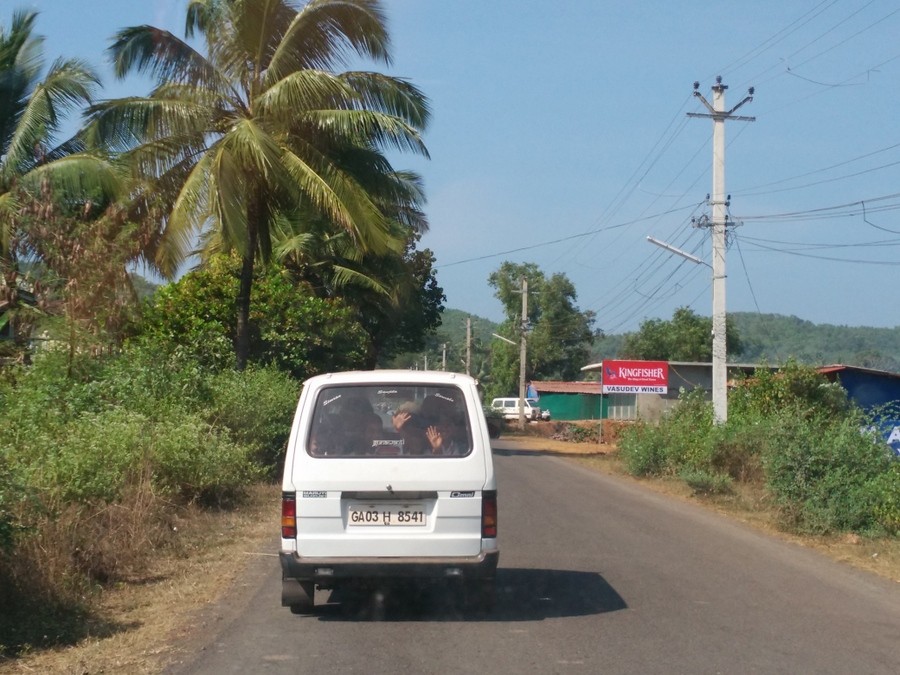 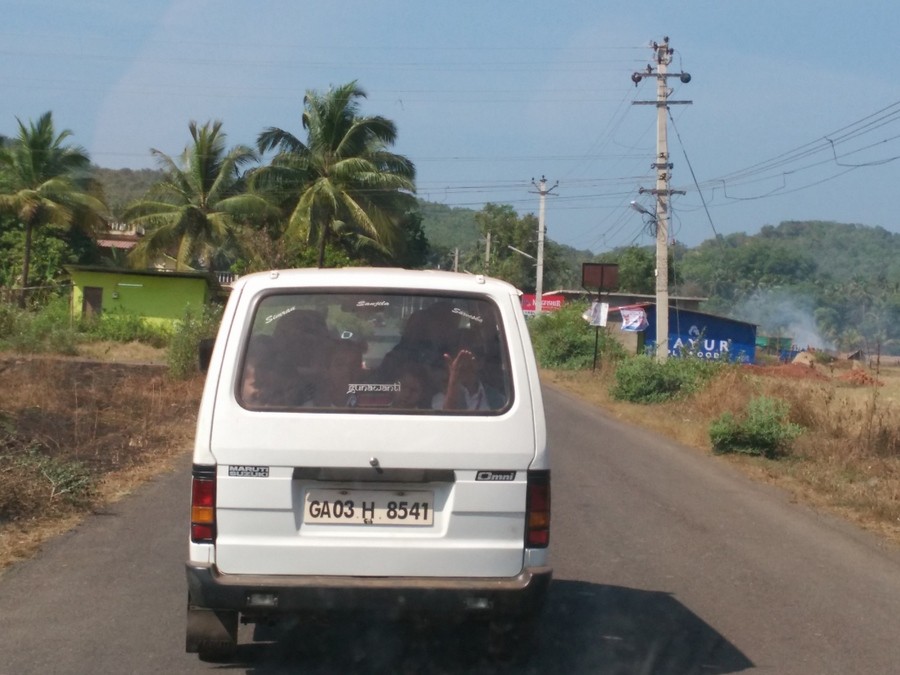 We went to the opening of the new Burger Factory in Morjim which was really tasty. 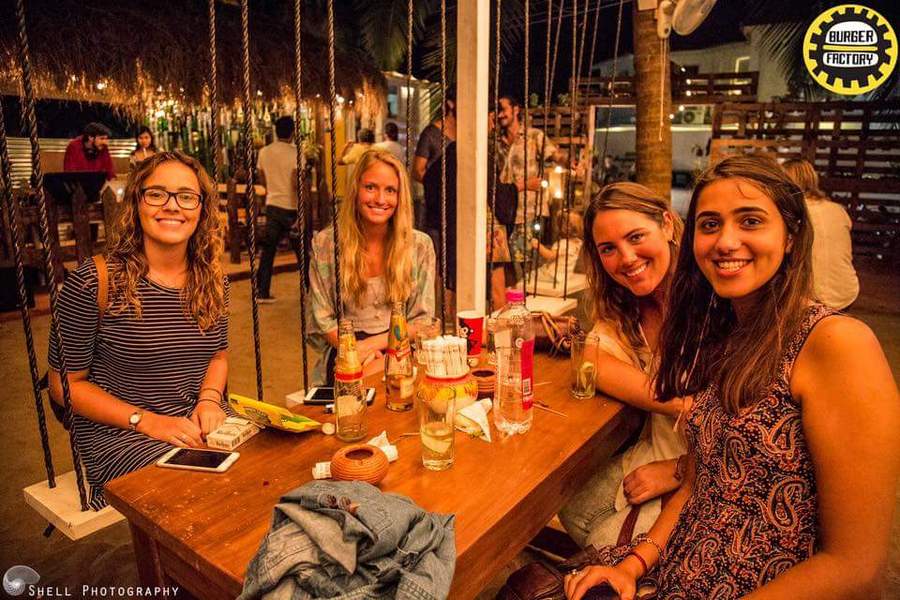 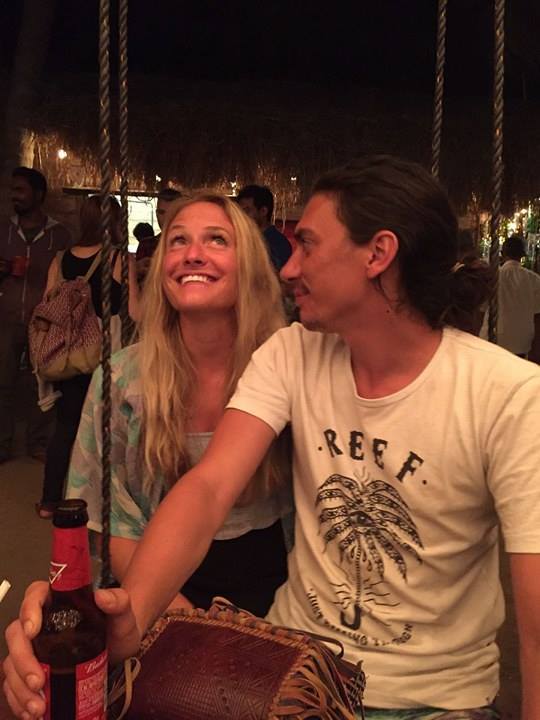 Hillbelly also started doing Hip Hop nights on Sundays which is a lot of fun! 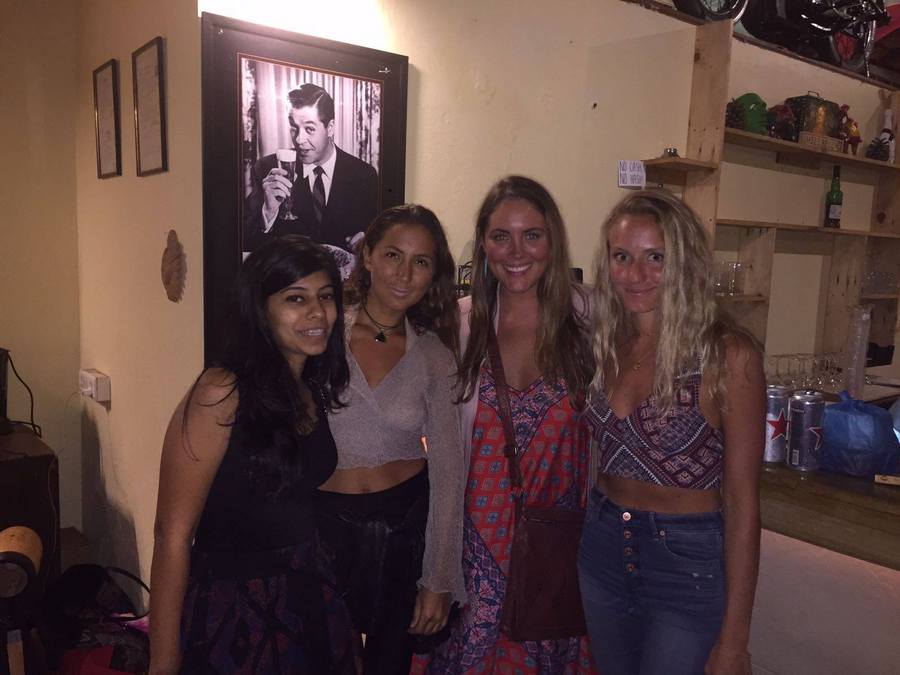 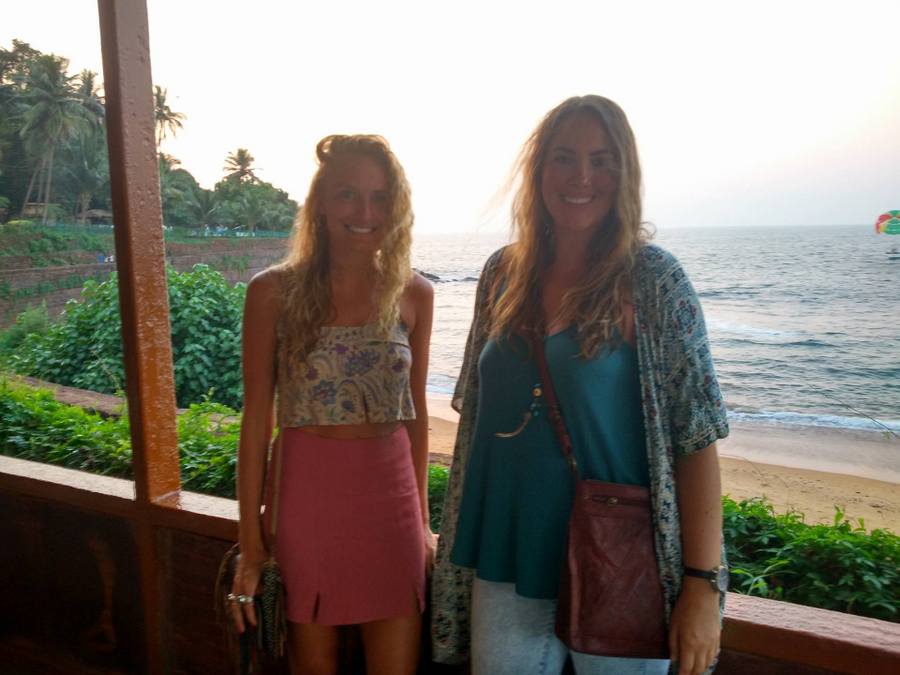 This is me and Ann at the Taj Hotel for sunset drinks.

This is Sharm getting ready to devour her strawberry chocolate cake I got her from Mona’s catering! 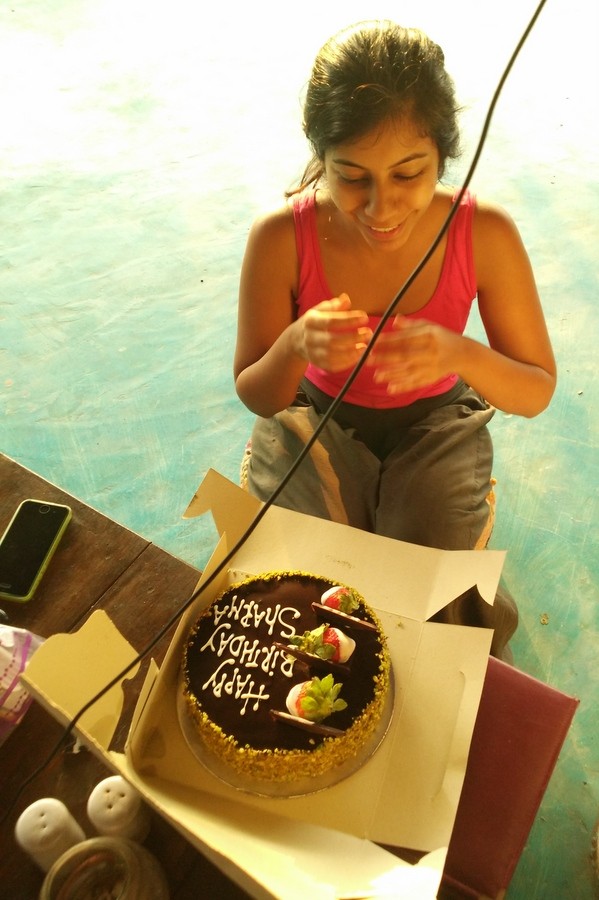 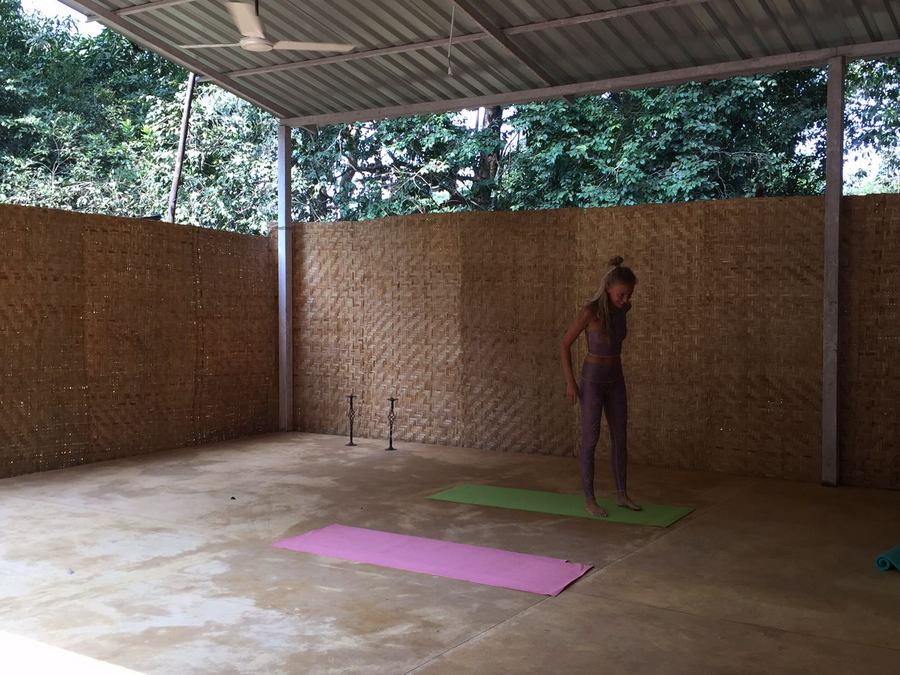 I’m wearing my favorite Teeki yoga outfit but Ben says it makes me look like a purple Power Ranger and he’s sort of right. Damn! 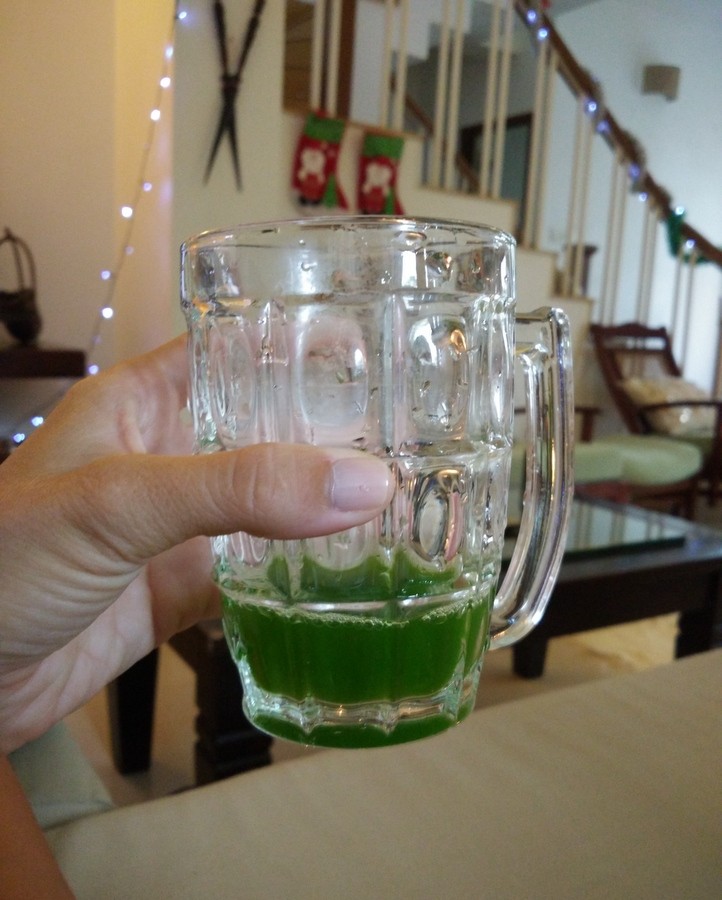 This delicious drink was made my our housekeeper to help me get better. It’s “grass water”. Yeah. I drank it. I’m still sick though. 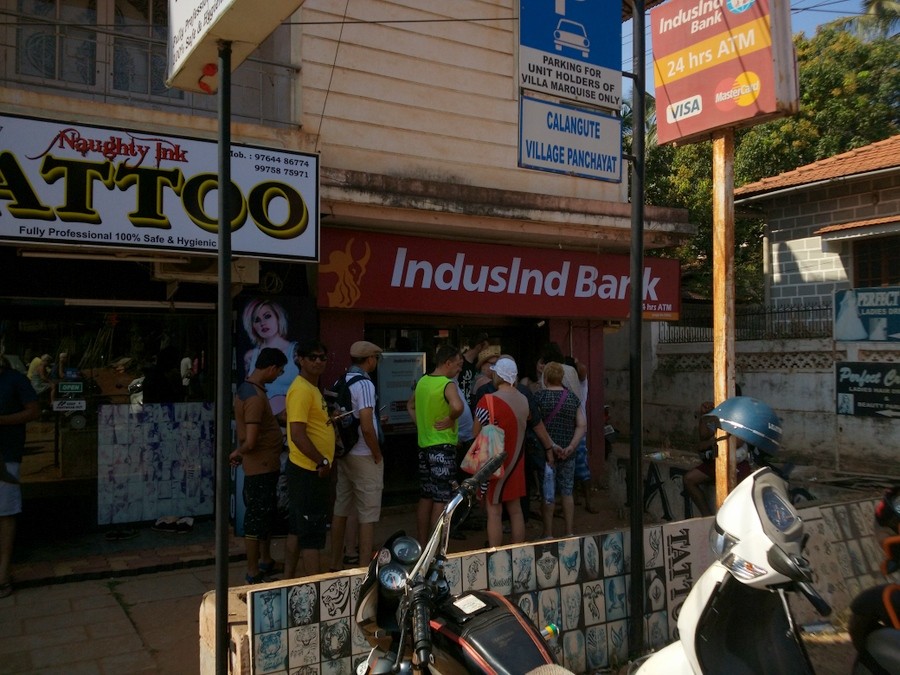 The ATM lines are still long but only about 10-20 minutes. Most aren’t open at all though. We haven’t been able to pay our electricity bill because it’s quarterly so it’s a huge amount when it comes and we can’t get that much money. Let’s hope the lights stay on for Christmas!