Why You Should Take a Walking Tour in Berlin

It might be a bit nerdy, but I love taking walking tours through European cities, like Madrid. I absolutely adore hearing how each one of them single-handedly ended WW2, or how they fought the most important battle of the war. I leave each city a believer in how strong the citizens are. Berlin was no different, except I had a walking tour that brought tears to my eyes. This is one example of why you should take a walking tour in Berlin. Hope you are ready for a history lesson! 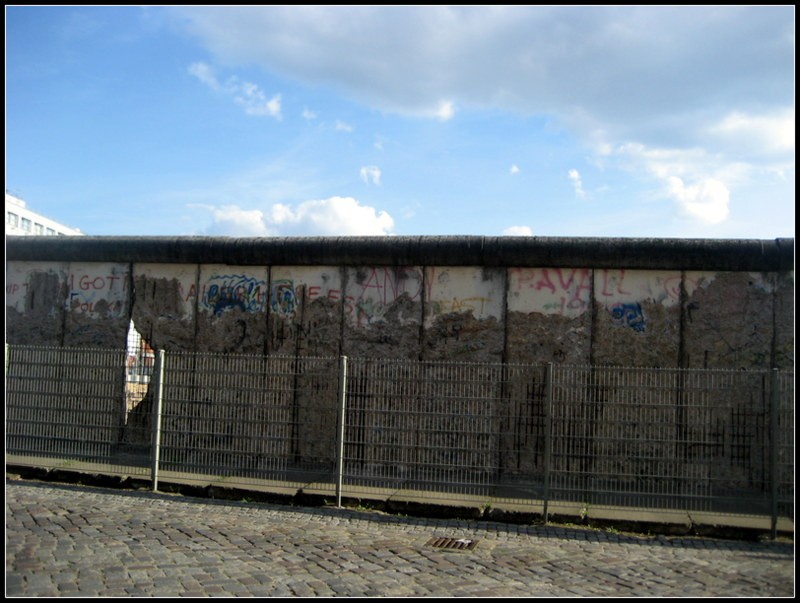 Because I am from the U.S. and WW2 wasn’t fought in my hometown or state for that matter, it seems far away, and like it was a long time ago. Being in Berlin, it was a big reminder it wasn’t that long ago at all. Our guide was magnificent, although not German (most guides are Australian or English travelers trying to make a few bucks), she told various stories about how the wall came down and about lovers separated and reunited again. She told us clever ways Germans used to get past the wall. Some of the love stories were so tragic I cried (but keep in mind a good commercial can make me cry, it doesn’t take much). 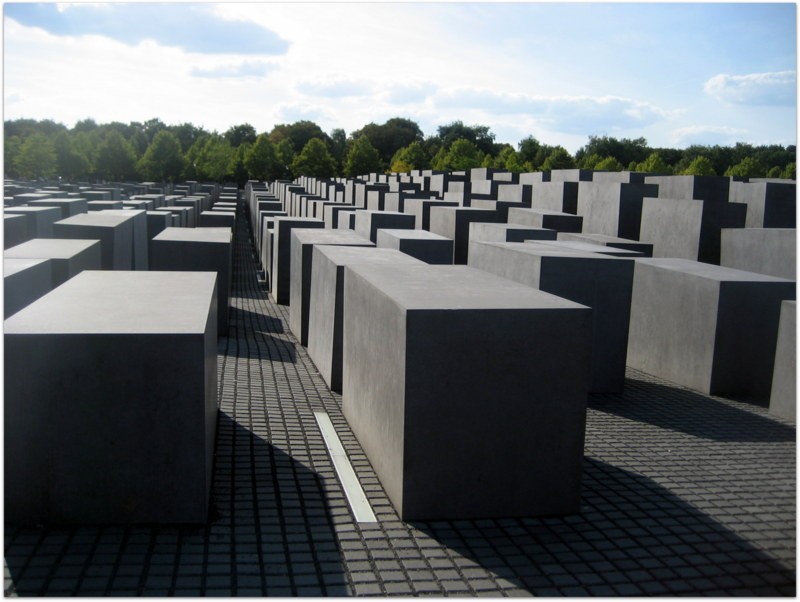 She took us to a parking lot and said, “This is where Hitler died”. Berlin thought he deserved a parking lot over his burial site, instead of a tombstone. There were no signs or any indication that this was where his life ended. 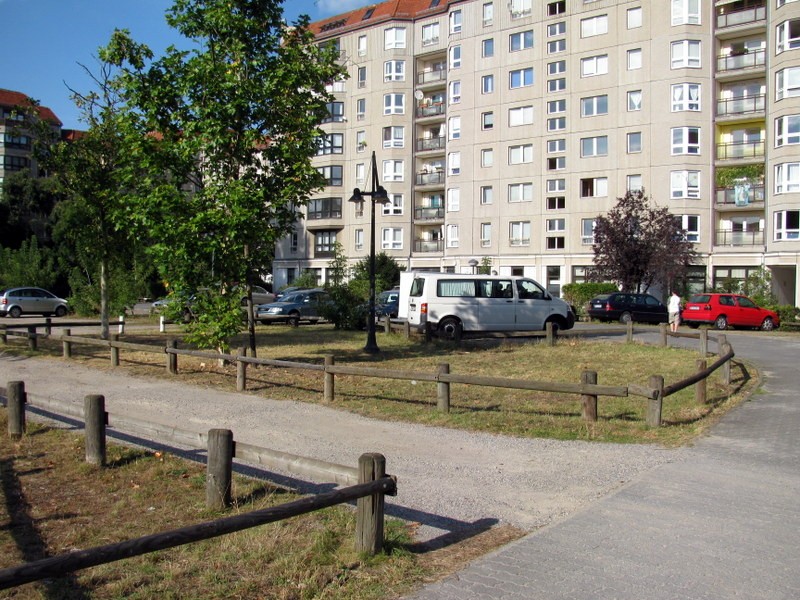 where hitler died, a parking lot

One part that really caught my attention was the square, Babelplatz where they burned 20,000 books by greats like Marx and Freud. Having been a huge fan of the book,  The Book Thief

, it was very sad to see. Next to the space that commemorates the books burnt is a quote from well before the Holocaust occurred. 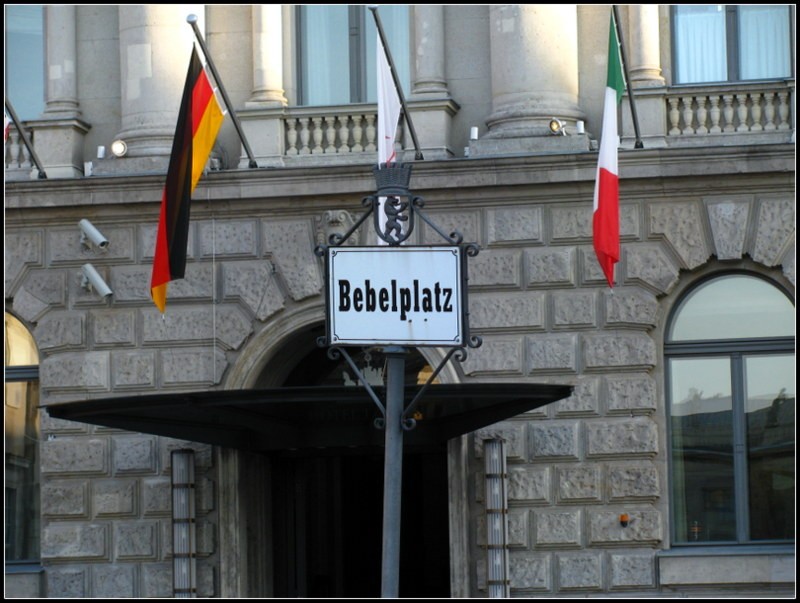 “That was only a prelude, there where they burn books, they burn in the end people.” -Heinrich Heine (1820) 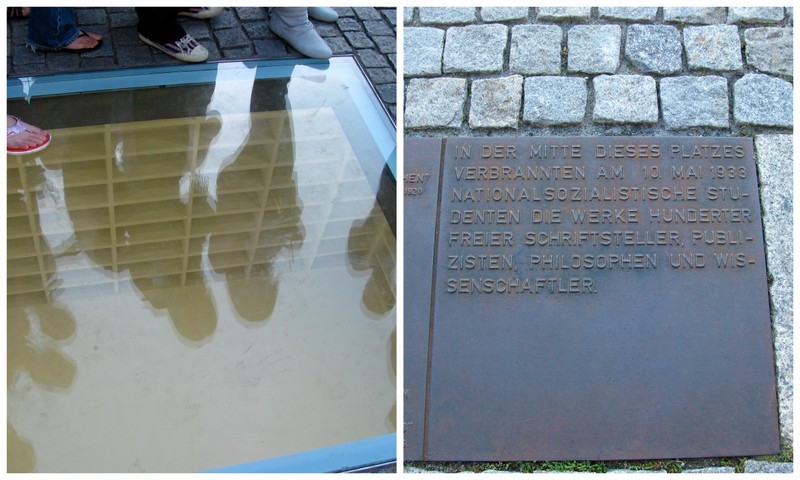 the space commemorates the 20,000 books burnt, to the right is the original quote 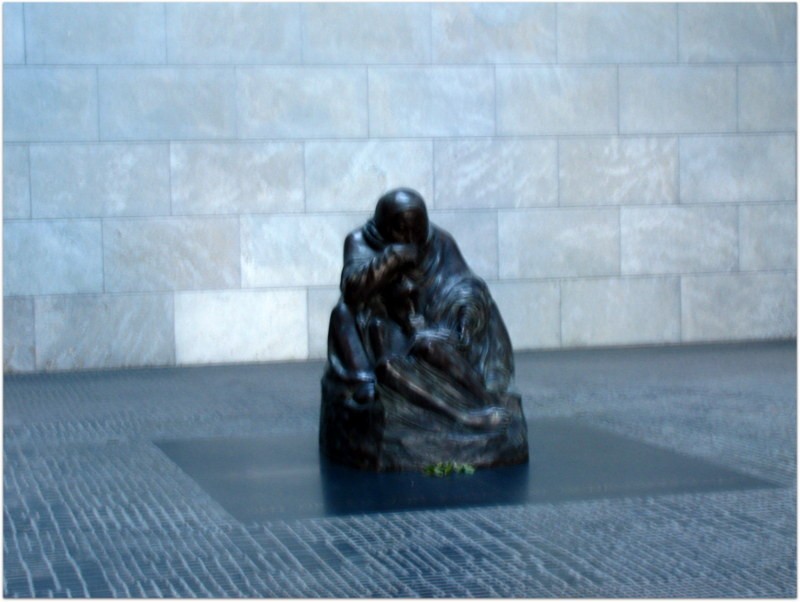 On a softer note, she also showed us where Michael Jackson dangled his baby out the window. Yikes. 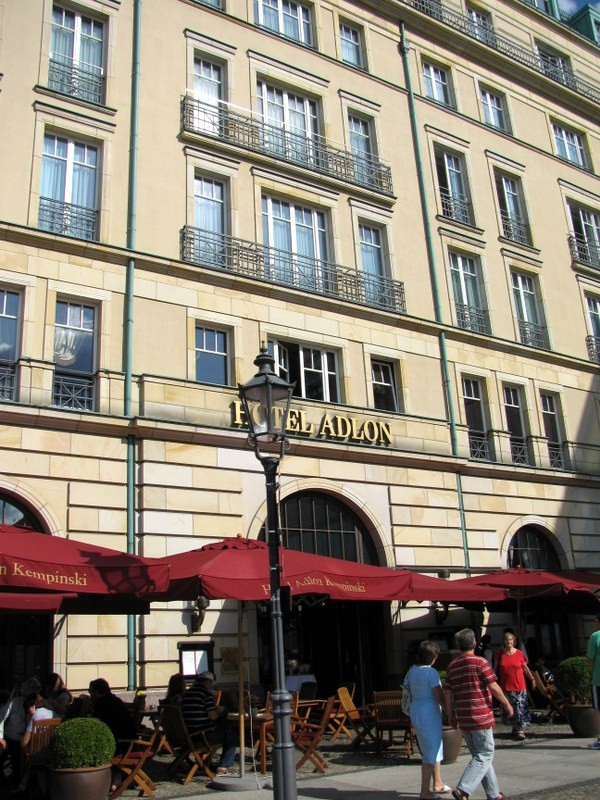 We wandered through the huge blocks at the Holocaust Memorial, which I was bothered to see kids sitting on and smoking weed.  She took us through areas in which old buildings have bullet holes from the war. We saw old checkpoints for the wall, and propaganda from Hitler that was used against the German people. 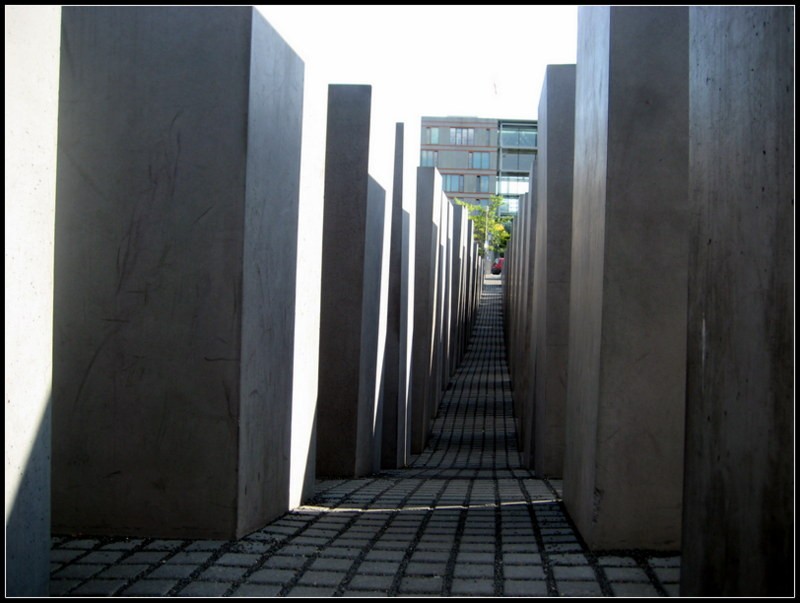 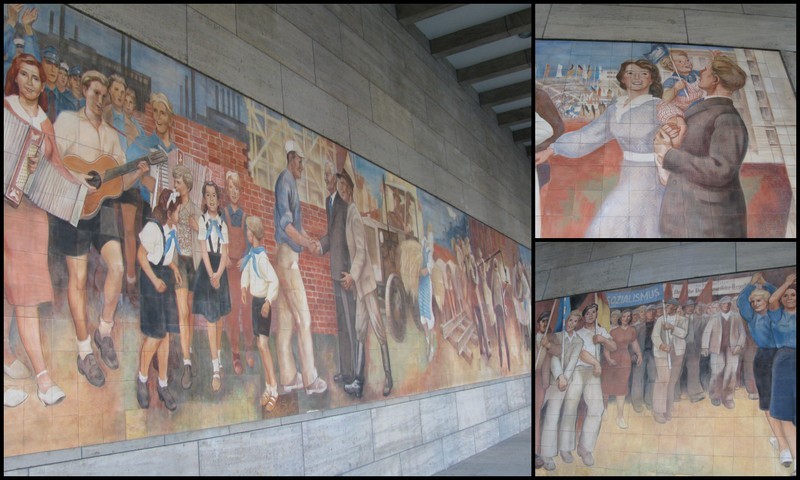 Nazi propaganda- what they wanted the German’s to think life was like, painted on a wall 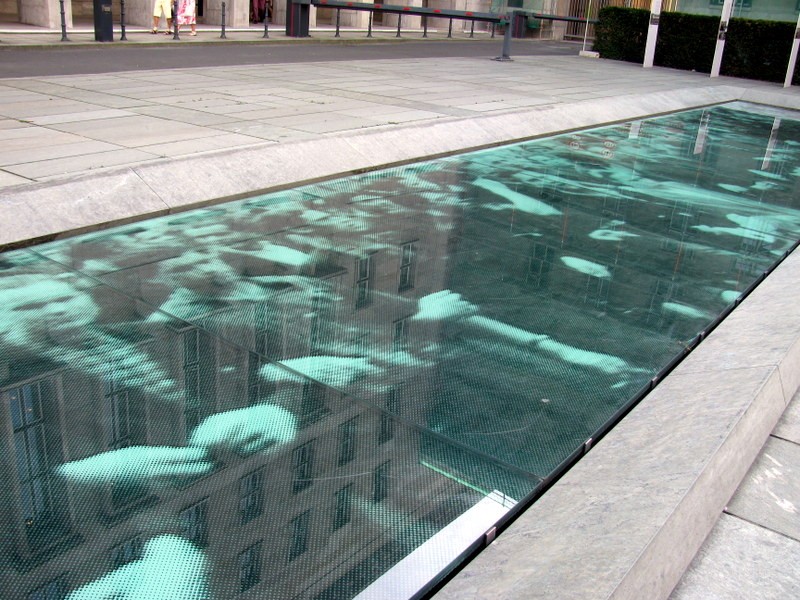 on the ground, in front of the propaganda wall, a photo of what life was REALLY like 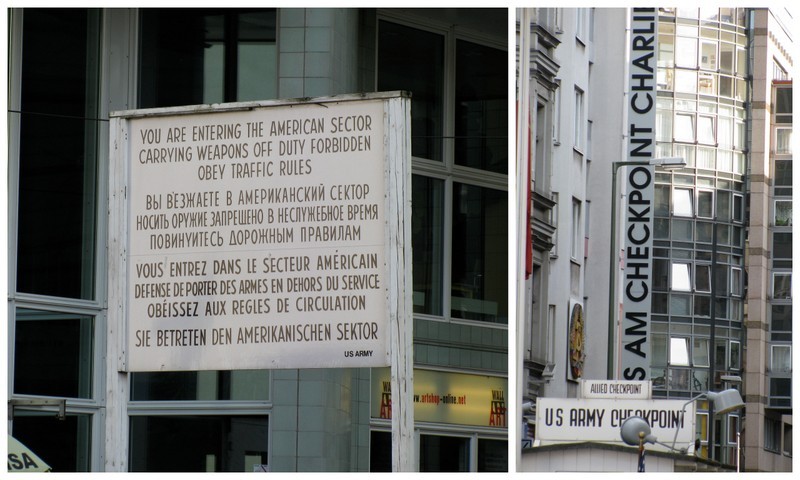 I consider myself a history fan, although my lack of long-term memory means that if you ask me a question I’ll likely not be able to remember what I was taught. These walking tours make it nearly impossible to forget because you’re seeing it with your own eyes and the stories get stuck in your head. I recommend being a nerd in each European city and letting someone guide you through a tour. They may be free, but remember to tip whatever you think that tour was worth! If you’re not as into history you could consider a street art in Berlin tour or even a food tour. 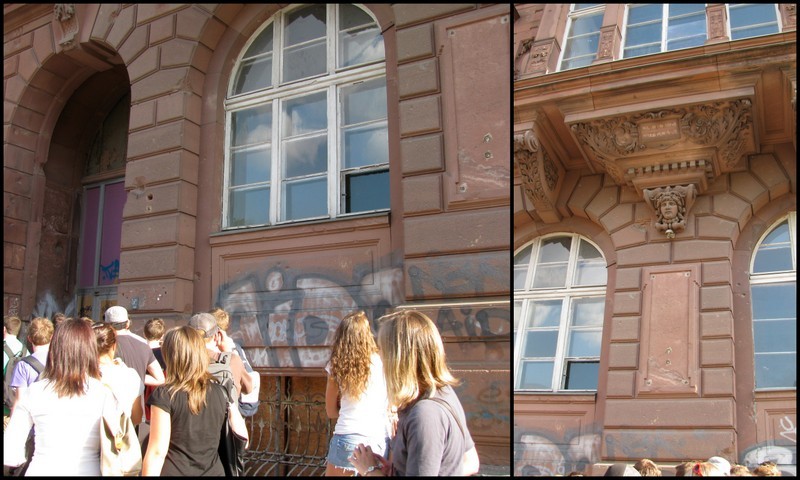 look at all those bullet holes!