How to Spend a Weekend in Buffalo, NY

It may be surprising, but there are actually a lot of wonderful ways to spend a weekend in Buffalo!

When I moved to here for my (now ex) partner’s work, I received a lot of snide comments from Americans and Canadians. (People from outside North America didn’t tend to know where it was, so didn’t have any opinions to share!) The rust belt city used to be one of the wealthiest in the USA, but that was a long time ago and it had gone through several decades of economic decline, urban decay, flight to the suburbs, and even depopulation.

But, what I found was completely different from what I’d been led to expect. And honestly, most people who spoke negatively about Buffalo had never been there. Although the city definitely has its problems and inequalities (where doesn’t!?), in reality it’s a vibrant and creative city with amazing architecture, good food and drink, beautiful nature not far away, thriving arts and music scenes, and urban rejuvenation projects breathing new life into previously abandoned and derelict spaces.

One rumor that was true, however? The winters! The winters are next-level cold and snowy, and especially shocking for someone coming from New Zealand, as I was. But there are few things more exciting than a Buffalo summer. Buffalonians really earn their summers!

Here are some insider tips for enjoying a weekend in Buffalo.

Tips for a Weekend in Buffalo, NY

Buffalo Niagara International Airport is in a suburb of Buffalo, and connects to other US and some Canadian cities. Buffalo is right on the border with Canada, and only about two hours’ drive from Toronto (although the border crossing can slow things down).

If you’re coming from an international destination, it often makes more sense to fly to Toronto and then drive or take the bus across the border to Buffalo. I did this a few times as it was cheaper than getting domestic US connections to Buffalo. The city is also really close to Niagara Falls, about a half-hour drive away, so it makes sense to combine visits to Niagara Falls and Buffalo.

Buffalo has a small subway network, and an extensive bus network. Although many visitors have their own cars, this isn’t strictly necessary, although obviously it’s more convenient.

Elmwood Village is one of the most interesting neighborhoods, with lots of shops and attractions, so it makes sense to stay there. There are also a handful of lovely hotels downtown.

Recommended hotels that ooze with historic charm are:

How to Spend a Weekend in Buffalo, NY

Try to arrive in Buffalo for Friday evening, so you can enjoy the city’s nightlife. Art lovers should kick things off by joining an Allentown First Fridays Gallery Walk. The Allentown neighborhood has a large concentration of independent art galleries, which open late on the first Friday of every month for guided walks (as well as drop-in visitors).

You’ll be in a good location to enjoy some food, drinks, and live music afterwards. I really love Allen Burger Venture, a burger bar that sells local and regional craft brews, or Cantina Loco, for tasty Mexican and strong margaritas to kick the night off.

If you want to stay out later, Allentown has some fun grungy dive bars that get loud with live music on the weekends, much of it local. Buffalo’s most famous music exports are Annie di Franco and The Goo Goo Dolls, and while you probably won’t run into them, you might find Buffalo’s next big thing.

by Pete716 via Wikimedia

If your weekend in Buffalo is between May and October, head to the Elmwood Village Farmers’ Market on Bidwell Parkway for breakfast and some gentle morning entertainment. I especially love the local peaches and nectarines in summer. If you had a big Friday night and need a sit down, grab an outdoor table and a strong coffee at Caffe Aroma, just across the road from the market.

After breakfast, take a short walk up Elmwood Avenue to the Albright-Knox Art Gallery. In the late-19th and early-20th centuries, Buffalo was one of the wealthiest cities in the US, thanks to its location on the Great Lakes trading route.

Rich locals (the same who lived in Buffalo’s amazing mansions) collected some of the finest art of the time, much of which is now displayed in the Albright-Knox. Art aficionados will be happy to see Warhol, Pollock Frankenthaler, and Lichtenstein in the permanent collection, and art novices will still enjoy browsing the manageable-sized gallery.

Afterwards, don’t miss the impressive outdoor sculptures that face the park. My favorite is the mirror mosaic tree stump with tentacles! Take a walk in Delaware Park, designed by the same guy who designed New York City’s Central Park and Brooklyn’s Prospect Park, Frederick Law Olmsted. It’s much smaller than those other parks, though.

After a refreshing walk in the park, walk the short distance back to Elmwood Village and grab some lunch there. There are lots of places to eat to suit your tastes, but great spots for a light Japanese lunch are Sato and Wasabi, both on Elmwood Avenue. Sato is a bit more modern, whereas at Wasabi I always felt like I was back in Japan.

In the afternoon, spend some time browsing the shops of Elmwood Village. Gift stores here focus on local Buffalo-made crafts, and there are fun second-hand clothing stores. I really love the local stained glass lamps, reminiscent of Tiffany glass. If you keep going south on Elmwood Avenue to Allentown (an easy walk if you’re active), there are a number of shops selling antiques, too.

The drinks are cheap, and you can grab a bar snack here for dinner. Even if you don’t know much (or anything!) about jazz, like me, you can still enjoy an evening of entertainment. There’s also a fun and interactive museum downstairs, which tells all about Buffalo’s place in US jazz history, but you’ll have to return in the daytime for that.

After a quick breakfast at your hotel or a local coffee shop (Spot Coffee is a popular local mini-chain), begin the day with a fun walking tour. Explore Buffalo runs a huge range of walking tours, which are a great way to see parts of the city you might miss otherwise, and to learn about some of its history.

These focus on all kinds of places and themes, including areas of the city (downtown, East Side, etc.) and architectural types (churches, Frank Lloyd Wright, and so on), and even the Buffalo mob. Whatever your interests, you’ll likely find a walking tour to interest you. I’m particularly interested in Buffalo’s old architecture, and there’s so much of that downtown.

To refuel after your tour, visit the West Side Bazaar for a delicious and affordable lunch. Buffalo has become home to many refugees as well as other immigrants over the past few decades, and many of these have settled in the West Side of town.

The West Side Bazaar is a very simple food court that serves very tasty food from Ethiopia, Laos, Myanmar, Puerto Rico, and other places. Plus, the place operates as a small business incubator, to help these new arrivals develop business skills. My favorite meals here are the Ethiopian platters, with injera bread and curries.

Spend time at the Buffalo Waterfront for the rest of the afternoon. The recent development over the last few years has breathed new life into a part of the city that wasn’t previously very appealing, and there are activities there for all kinds of travelers.

Park up for an afternoon of beer and sport, if that’s your thing (unlike me!), at (716). If you’re feeling a bit more active, you can go kayaking in the Buffalo Harbor, or ride a cycleboat. For a happy medium, go on a harbour cruise on the Miss Buffalo, or visit the Buffalo and Erie County Naval and Military Park, complete with the decommissioned USS Little Rock battle ship. 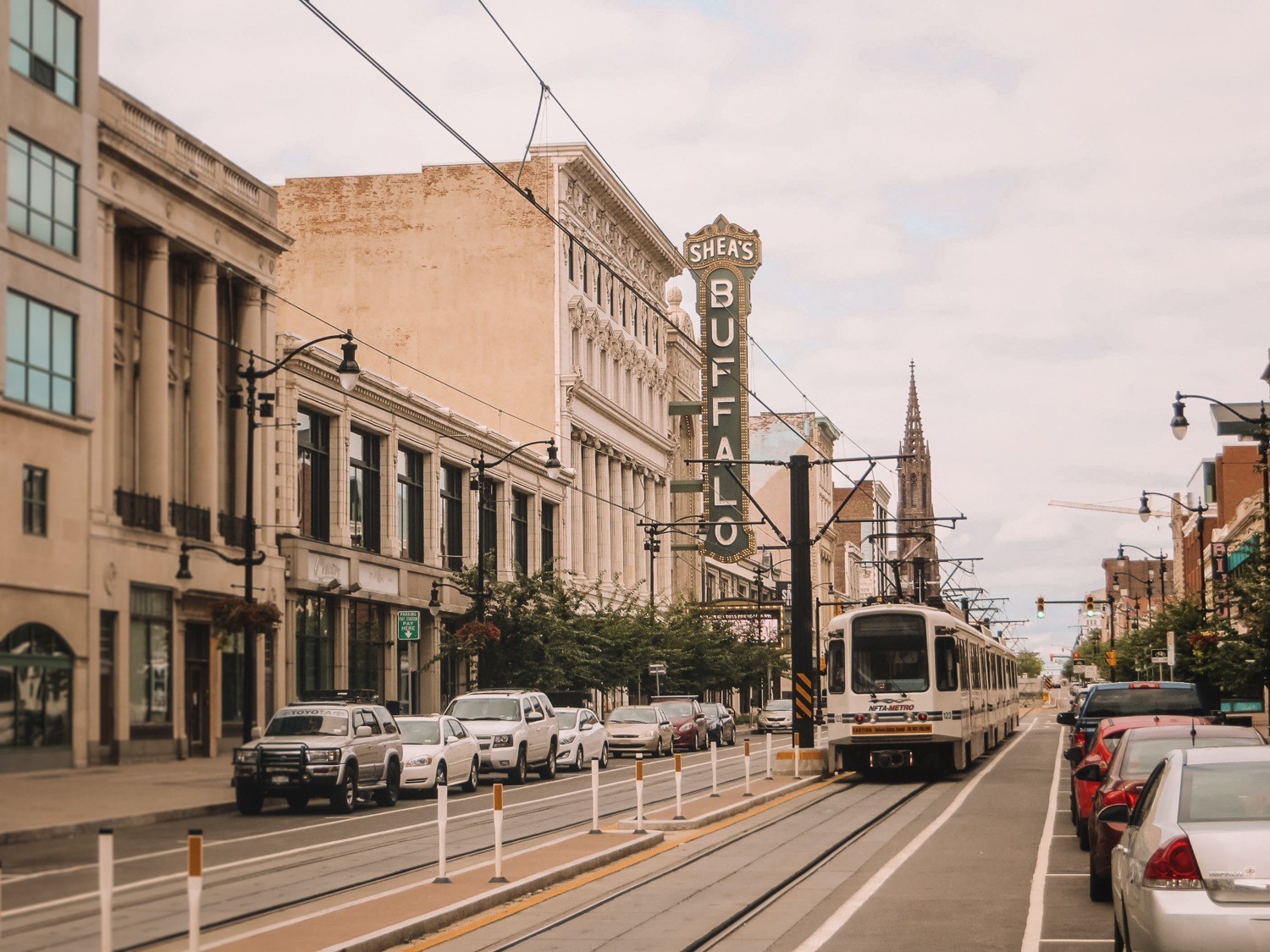 by David Wilson via Wikimedia

If you’re well organized and can book tickets ahead of time, spend an evening at one of downtown Buffalo’s most iconic and attractive buildings, Shea’s Buffalo Theatre. The building dates back to 1926, and shows local as well as touring performances. If you can’t see a show, at least take a quick photo of the lit-up sign outside.

Alternatively, catch a movie at the North Park Theatre on Hertel Avenue. Opened by Michael Shea of Shea’s Theatre fame, the movie theater has a beautifully ornate exterior and interior. It shows independent and art-house films, classics, and some more mainstream ones.

For dinner, either before or after a show or movie, you won’t want to miss out on trying some authentic Buffalo wings in the city that created them. In Buffalo, though, they’re just called wings! Anchor Bar, on Main Street, is credited as being the inventor of the spicy fried chicken drumstick served with blue cheese sauce, and while it’s not the only place in town to get them by a long shot, it’s definitely the most iconic.

So there you go, after following this Buffalo weekend itinerary you’ll have no reason to believe any lies or rumors you hear! You’ll now have experienced some of the city’s best eating, entertainment, shopping, and sightseeing activities! Whether or not you’re en route to/from Niagara Falls, there are many good reasons to spend a weekend in Buffalo.

Have you spent a weekend in Buffalo, NY? What did you get up to? Let us know below! 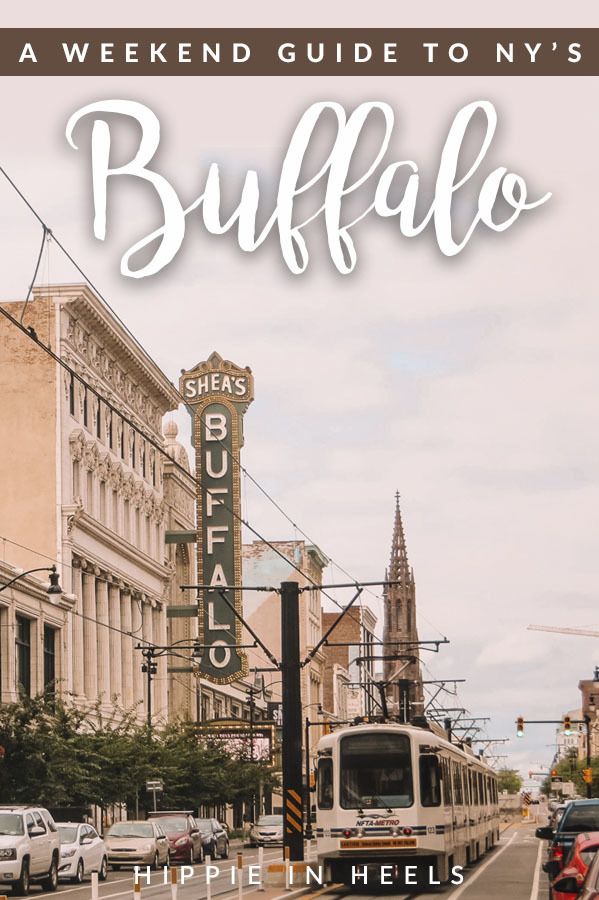