The Golden Temple in Amritsar is a stunning sight, one you’ve probably seen on at least one documentary, CNN program, or while scrolling through Pinterest. 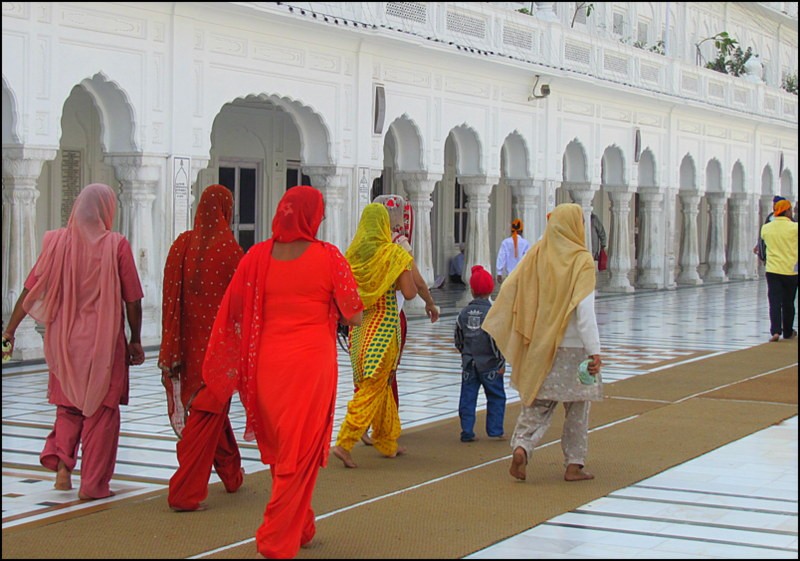 Of all the temples I’ve seen (a lot!), this is by far the most interesting one I’ve been to, or will probably ever go to.

The Sikh Temple is a peaceful place that anyone can enjoy no matter their race, religion, or sex. But then again Punjabi’s wouldn’t care as the laid-back group of people famously say with a grin, “food is our religion.”

Who are the Sikhs? They are military WARRIORS and “saint-soldiers” and they dress the part. Big, strong men carry golden spears with a turban placed on their head, exuding strength and bravery. I mean, obviously they don’t all dress like this all the time- but it’s still cool. 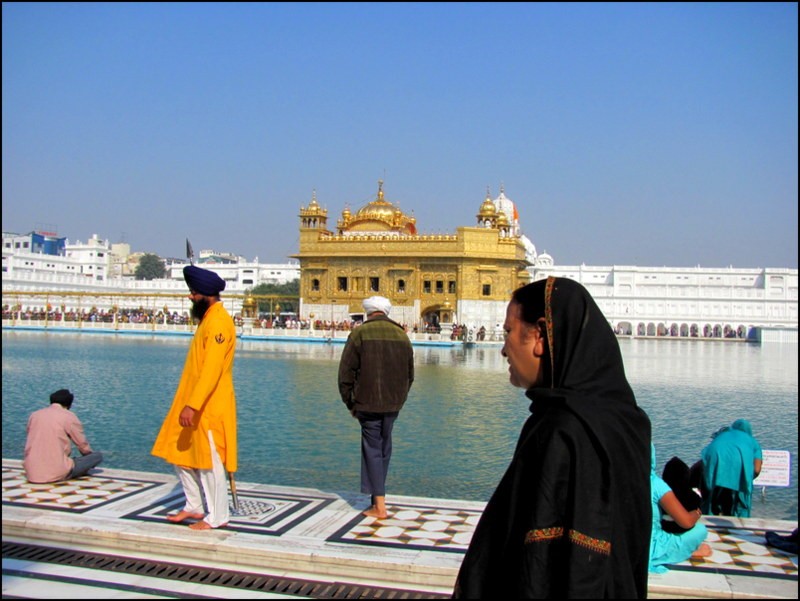 History lesson: During the partition of India in 1947 thousands were killed. They see themselves as a minority group in India, and they always have their guard up because they have been attacked in the past…. by their own people (Indians), as late as the 80’s at the temple itself (Operation Blue Star). Because of that, there are sometimes Hindu-Sikh conflicts in the Punjab region.

Literally, as I’m writing, assuring you all how Sikhs are like religious perfect superheroes, the BBC reports there are clashes between Sikh’s and Sikh’s at the Golden Temple on the 30 year anniversary of the attacks against them… over who gets to speak first on the microphone. They pulled out their swords, had a true sword fight, and 3 were sent to the hospital. Ok, so they aren’t perfect…

This temple is just a few kilometers from the Wagah border to Pakistan, the ONLY place you can cross the entire border. This Punjabi region has a volatile past and although no active problems in this particular area- it’s well known both sides (Indian and Pakistani) have threatened nuclear attacks at each other. 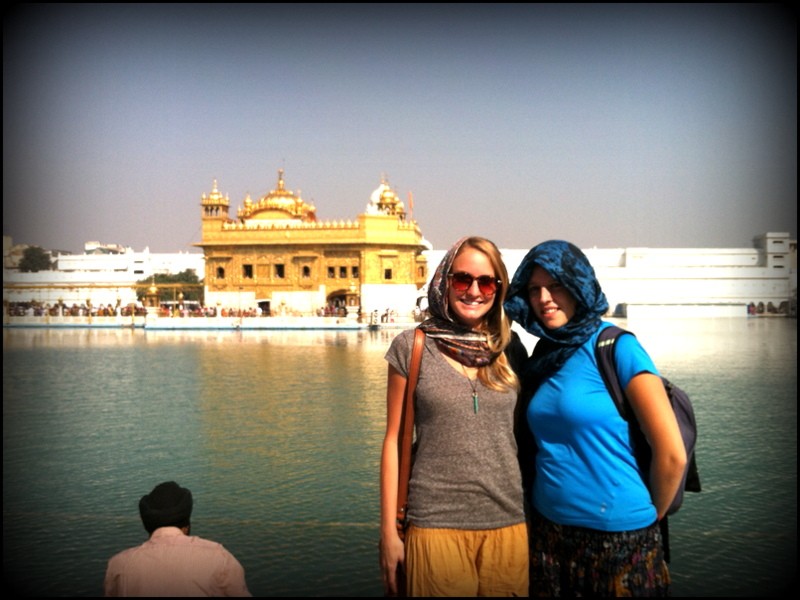 I was told by a few Indian men I met throughout my trip that Sikh’s did this as a f*&# you to the Indian Caste system, which was really where the start of their entire religion came from.

How does that make sense? Well, they told me.

In the strong Hindu caste system, someone from a high caste would NEVER sit down with someone lower than them and eat dinner (traditionally, although these days is not always true). Here at the temple, everyone gets a free, delicious, filling meal…. And they will sit on the floor next to whoever else comes in. Doesn’t matter if they are poor or rich, male or female, or if they are even religious at all. Pretty incredible. 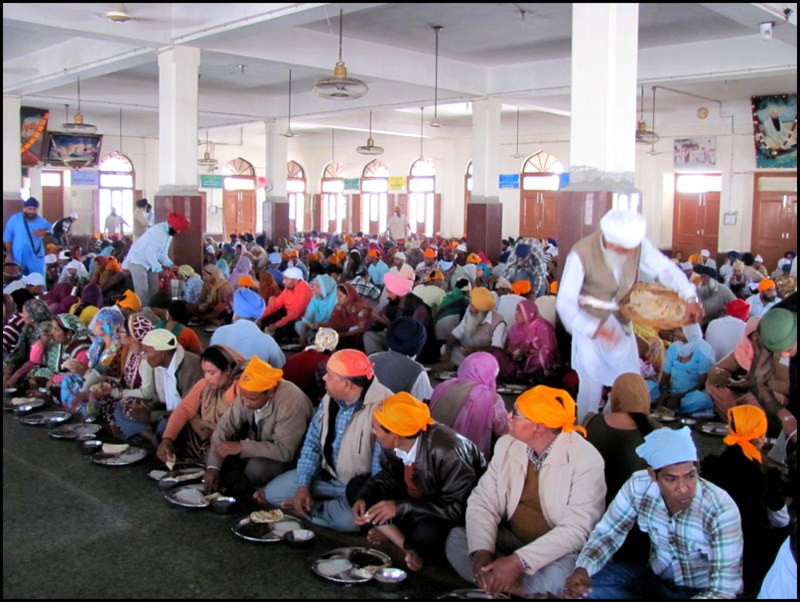 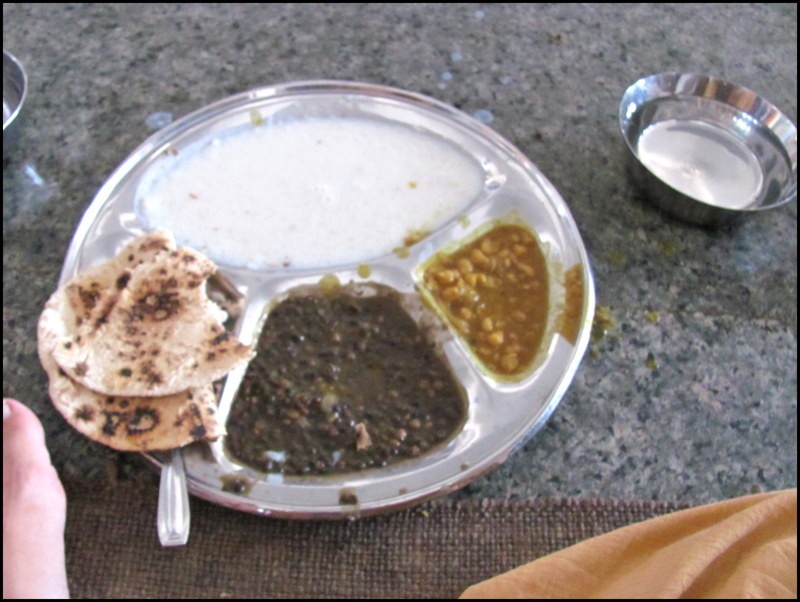 They’ve been feeding people for over 400 years.

It’s all done by volunteers. People to peel garlic, cook, make bread, serve, wash dishes, mop floors, and help pass out new dishes. It’s done so quickly at perfectly, you don’t need to think. They will usher you in, splash the lentil soup down, and before you know it, it’s time to go. The line moves quickly, so you should eat quickly too.

You must watch this video to see how fast-paced it all is! I didn’t do any editing, so bear with me, it’s about 30 seconds long.

The temple will even let travelers sleep there for free (although I don’t recommend that). This is for foreign travelers only as a convenience.

Although a place that welcomes tourists, keep in mind it is a spiritual place. You’ll feel that when you see people crawling on their knees, kissing the ground, and taking a dip in the holy water. Stay respectful.

The water around the temple is called the holy water or “immortal nectar”. There are many places with holy water in India like the Ganges, and the lake at Pushkar. Indians make pilgrimages to them. Sikhism to me is one of the most interesting religions I’ve encountered and yet one people don’t seem to know much about.

Now for the nitty-gritty of Amritsar Golden Temple:

The line is LONG. Be patient.

Women can not get in the water.

Do NOT dangle your legs in the water, and you must sit cross-legged.

Best to use the toilet before you get to the temple. They were interesting. You are barefoot, remember…

Ask people before you take photos.

Don’t forget to look down at the koi fish!

Take off your shoes and walk through the shallow water to clean your feet as you walk in. 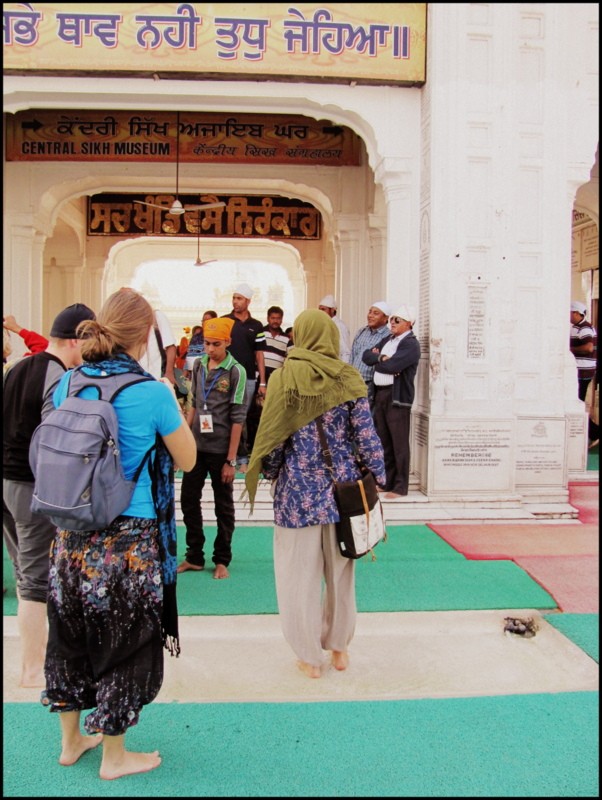 Know that the city of Amritsar is a little chaotic but the crowd will help lead you to the temple. There may be some pushing, but this is India, so duh. You’ll be fine!

Combine this day with your trip to Wagah border. Do the temple first in the early morning. By to the border by 5 pm.

We came from McLeod Ganj and placed signs looking for people to car-share with us. Trains and buses both will take you here as well as always in India, at a very reasonable price. I know on a map it looks a little out of the way but it was a day trip (a LONG LONG one) from Mcleod Ganj and was worth all that car time. If coming from Rajasthan to the mountains, make a detour on your way up. You can add this into the “Golden Triangle tour” after Jaipur.