For a MUCH updated guide, check out my Places to Visit in Jaipur post!

Remember when I told you about the “blue city of India”, well they have a pink one too. Of course.  If you’ve been following my Rajasthan adventures, you know that Rajasthan = bright colors, sequined saris, orange turbans, sand, castles, forts, kings, royalty, busy bazaars and delicious spicy food made with desert chiles. So why would the capital, Jaipur, be any different?

Jaipur was the first planned out city of India and pink was chosen because it means “hospitality’ and the Queen and Prince were visiting. “Welcome, we painted our stucco pink for you!” The sandstone itself had a pink tint to it. Fast forward to present day and by law, the capital city is still pink. 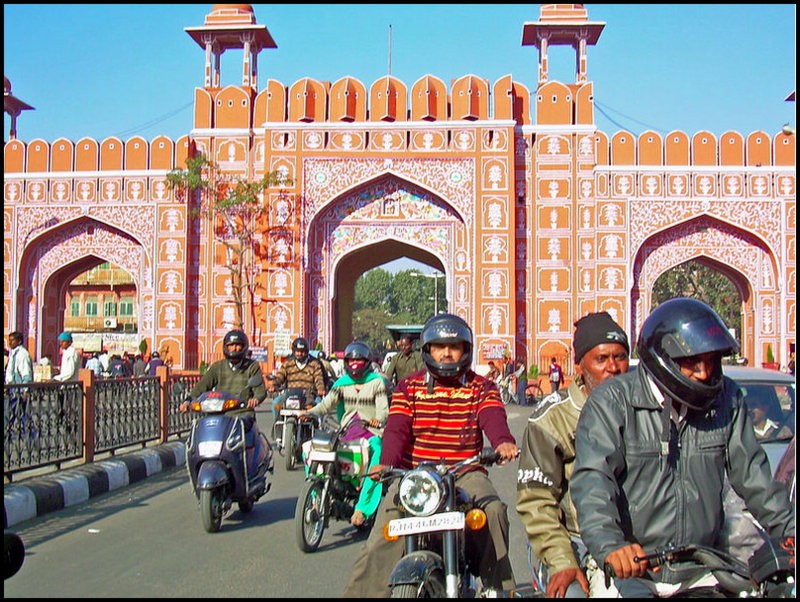 If you want a deep feel of Jaipur watch “Exotic Marigold Hotel”– such a cute movie that takes place in Jaipur. You won’t be surprised to find elephants, monkeys, and camels here. 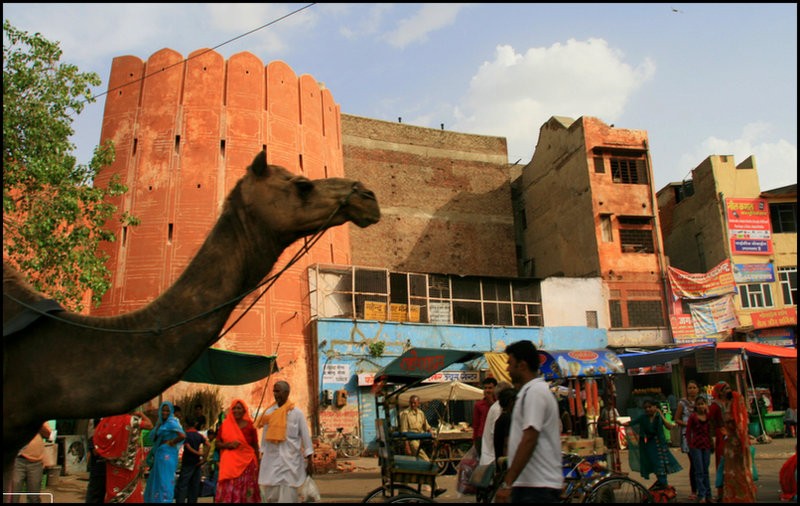 I was so happy to meet up with my Dutch friends from my camel safari in Rajasthan, Barbara and Leonie as well!

Jaipur is in Rajasthan, but is only 6 hours from Delhi by bus. It’s a good idea to either A: fly into Bombay, move north through Rajasthan ending in Jaipur, then head to Delhi, and wherever you want from that hub (I chose Himachal Pradesh), or B: fly into Delhi and go to Jaipur first to start your Rajasthan tour.

Not bad! These were quick easy rides, but at times I had to go incognito due to people’s staring almost stealing my soul.

Highlight of train ride: finished “The Alchemist”. Lowlights: windows down means more knots in my hair. After this ride I was officially un-brushable and spent the whole ride worrying my bag would fall off the top of the bus during this bumpy ride. 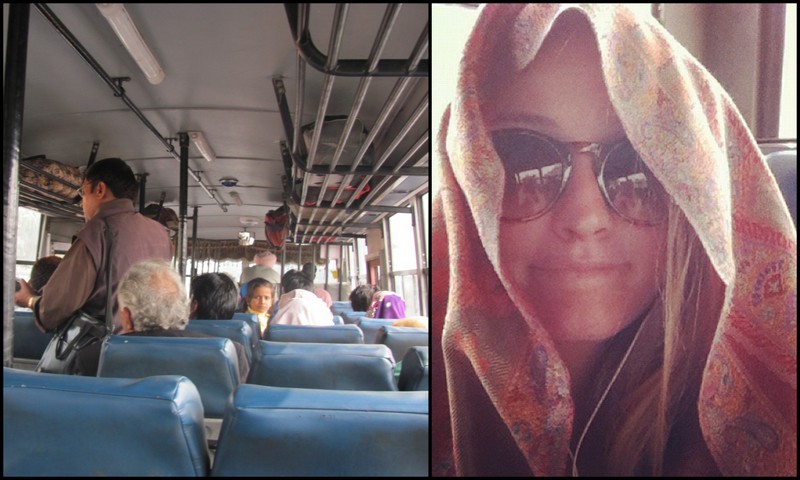 If you aren’t going to the rest of Rajasthan, the “Golden Triangle” that tourists love is Delhi, Jaipur, and Agra. Agra is the location of the Taj Mahal. 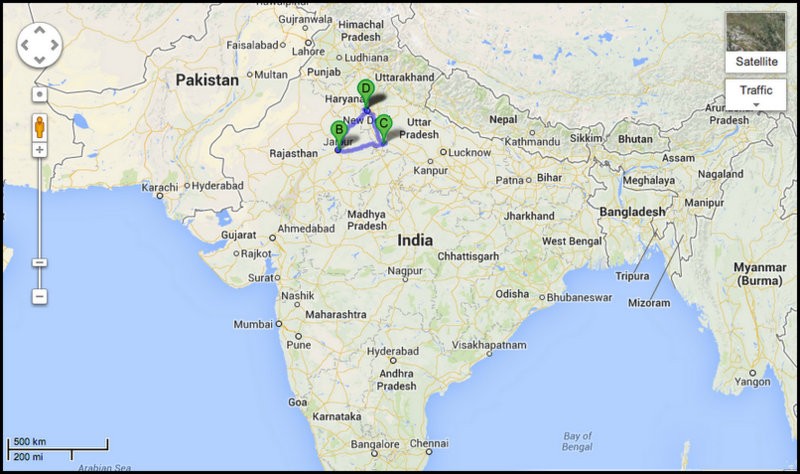 There are tons of attractions in Jaipur, but sometimes we don’t have time to see them all. Some are more worth your time. So, without further ado, let me just lay it out for you.

You want to make time for:

The Amer/Amber Fort. While the King was here he had 12 wives and 350 mistresses. Seriously. Here you can ride a painted elephant on the road through the Sun Gate. I chose not to because I felt bad for the cutie-pies. Take a rickshaw 11 km from city. At night they will have a light and sound show. Rs. 300 including camera fee/ Rs. 200 for Indians. Elephant rides are only possible in mornings. 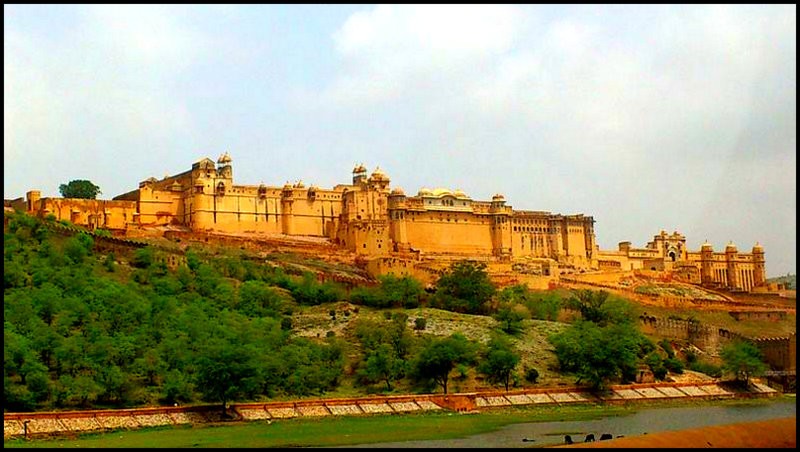 Galti Ji pilgrimage site holds natural water springs and Ramgopalji temple, referred to as monkey temple, “Galwar Bagh”. You will have to take a rickshaw here; it’s 10 km from city center. The temple is built in pink stone and you guessed it- there are a LOT of monkeys here. This is free and great at sunset! 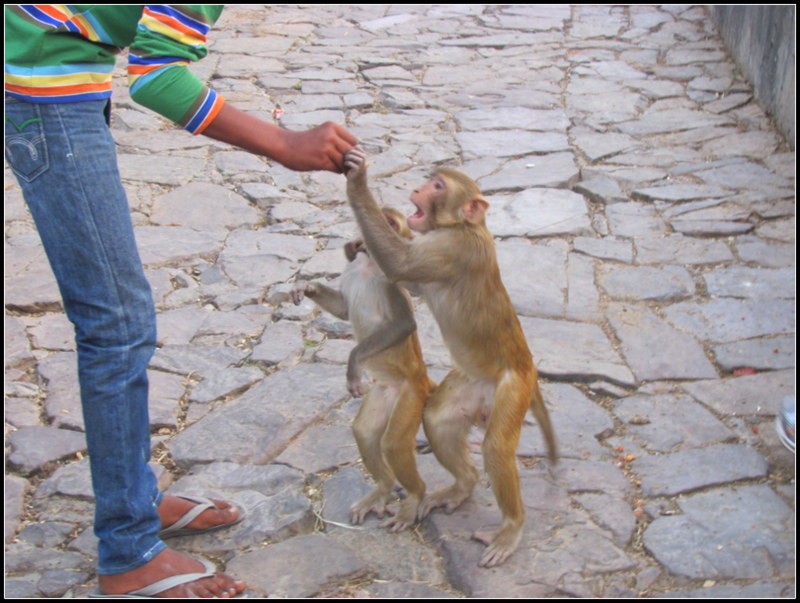 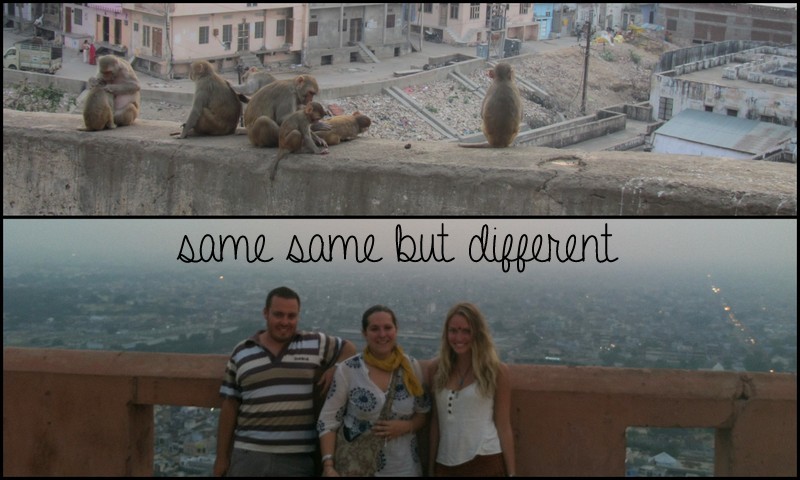 the place many people & monkeys go to watch the sunset 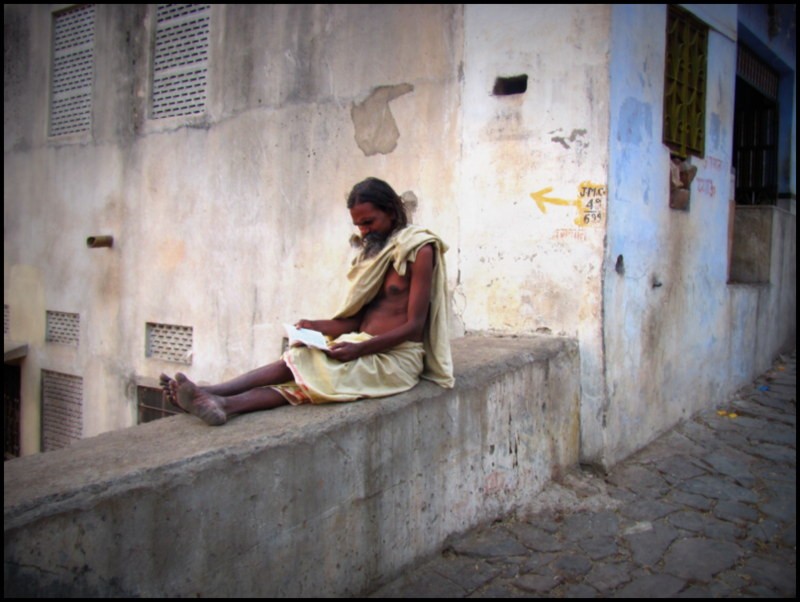 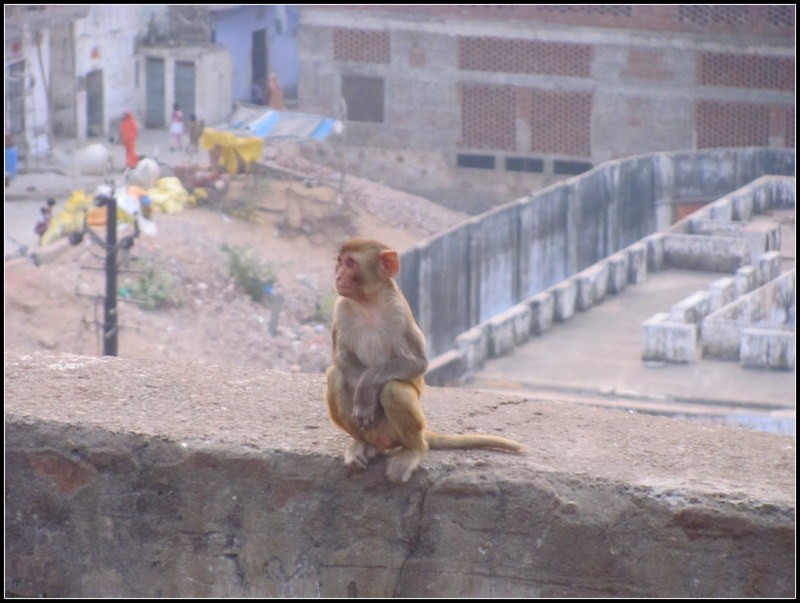 Shopping in the Bazaar. This market is great for fabrics if you’re interested in making your own clothes. There are tailors that can help you make kimono, shawls, or dresses. Men can get suits and dress shirts tailored.

Jewelry of course is a main attraction: silver, gold, bangles, and jemstones (shop at Gem palace). If you’re into pottery, Jaipur is famous for it’s blue pottery, and Kripal Kumbh is famous for making it. Beaded slippers are another popular purchase. Markets are closed on Sunday. 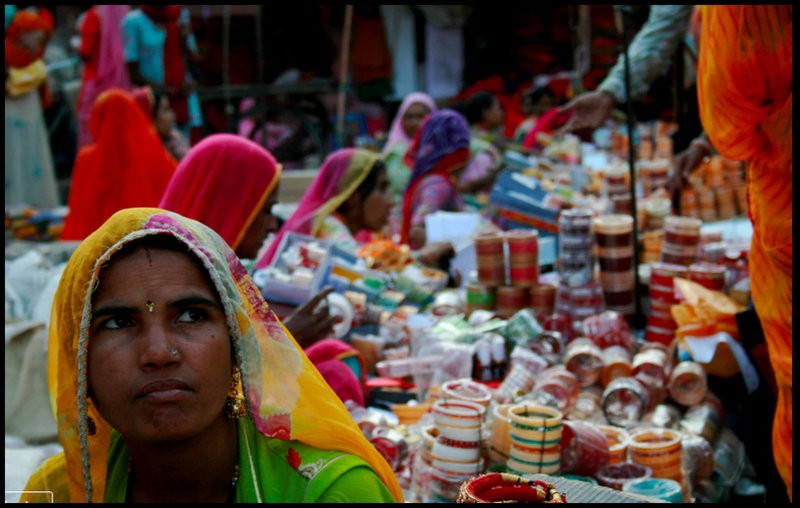 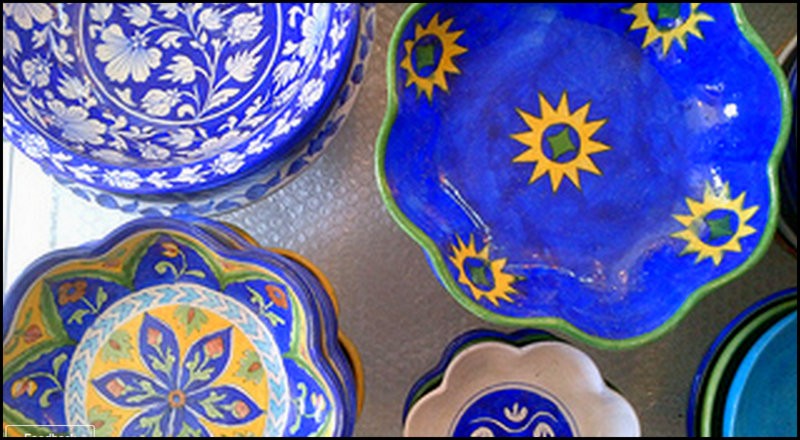 City Palace (museum). Fun Fact! When Amer became over-populated and water was becoming short, Jaipur city was built using Vastu shastra (using the elements and nature to flow through the houses. It’s very interesting. I like to call it Indian Feng Shui) and City Palace was built. Located in the center of city, Rs. 150 for foreigners/ Rs. 75 for Indians. Open 10-5. 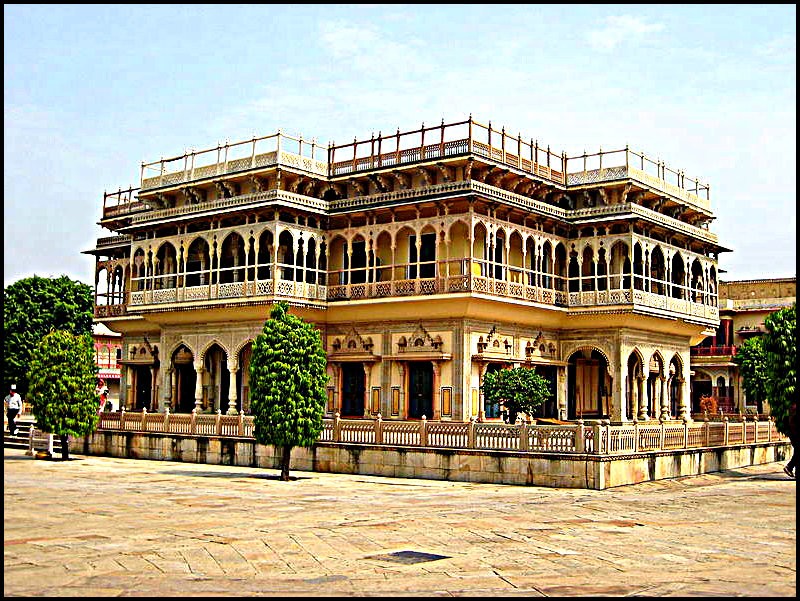 Hawa Mahal “Palace of the Winds” is next to City Palace, so why not see it too? Rs. 50 for foreigners/ Rs. 10 for Indians. 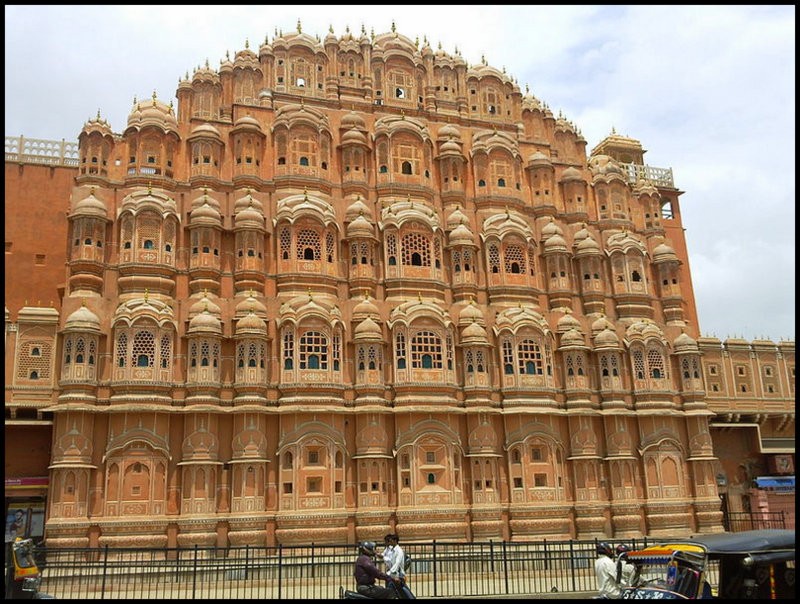 Overall Jaipur wasn’t my favorite place… but I am not a big city person. I needed to relax and it was a little chaotic. Plus, this happened…. 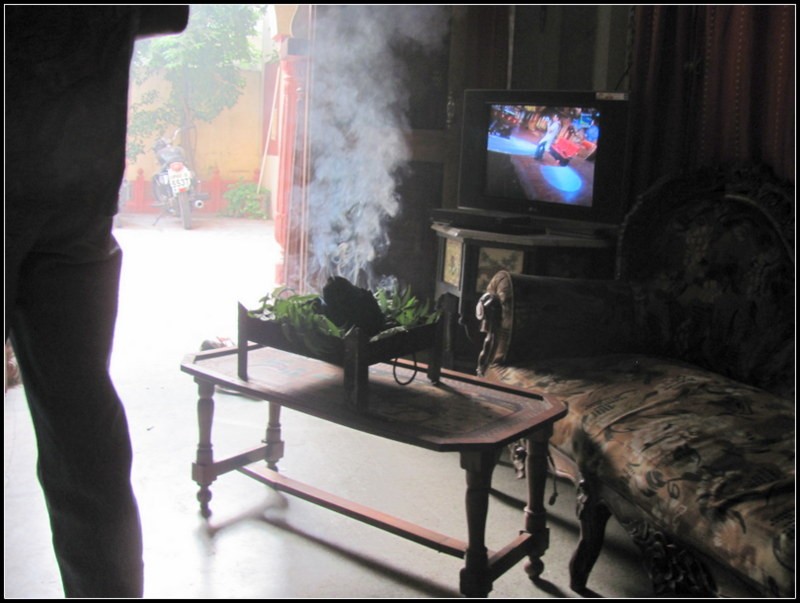 What could it be? Not burning cow poo right outside my guesthouse door to keep away mosquitos because that would smell terrible….

“you’re welcome madam” said the guesthouse owner, clearly very pleased with himself for making his guest so happy. *sigh

I stayed at Devi Niwas which is a guesthouse/the owner’s home. They were rude. We asked for a basic fan room. They gave us a room that had an A/C in it that we did not use. They then said “how do we know you did not use it?” and tried to charge. He told us even though we paid for hot water, he’d like us to be kind and not use it because it’s too expensive for him. He also seriously freaked out at us for being loud… at nine P.M. because his kid had school in the morning. Probably why you shouldn’t run a guesthouse out of your home. One girl didn’t come home because she stayed out drinking. When she came home in the morning, he said she was rude for not calling. He kept saying obviously bad things about her in Hindi, then told her to leave. No, it’s not customary in India to call your hotel if you aren’t making it home that night.

Pin this for later! 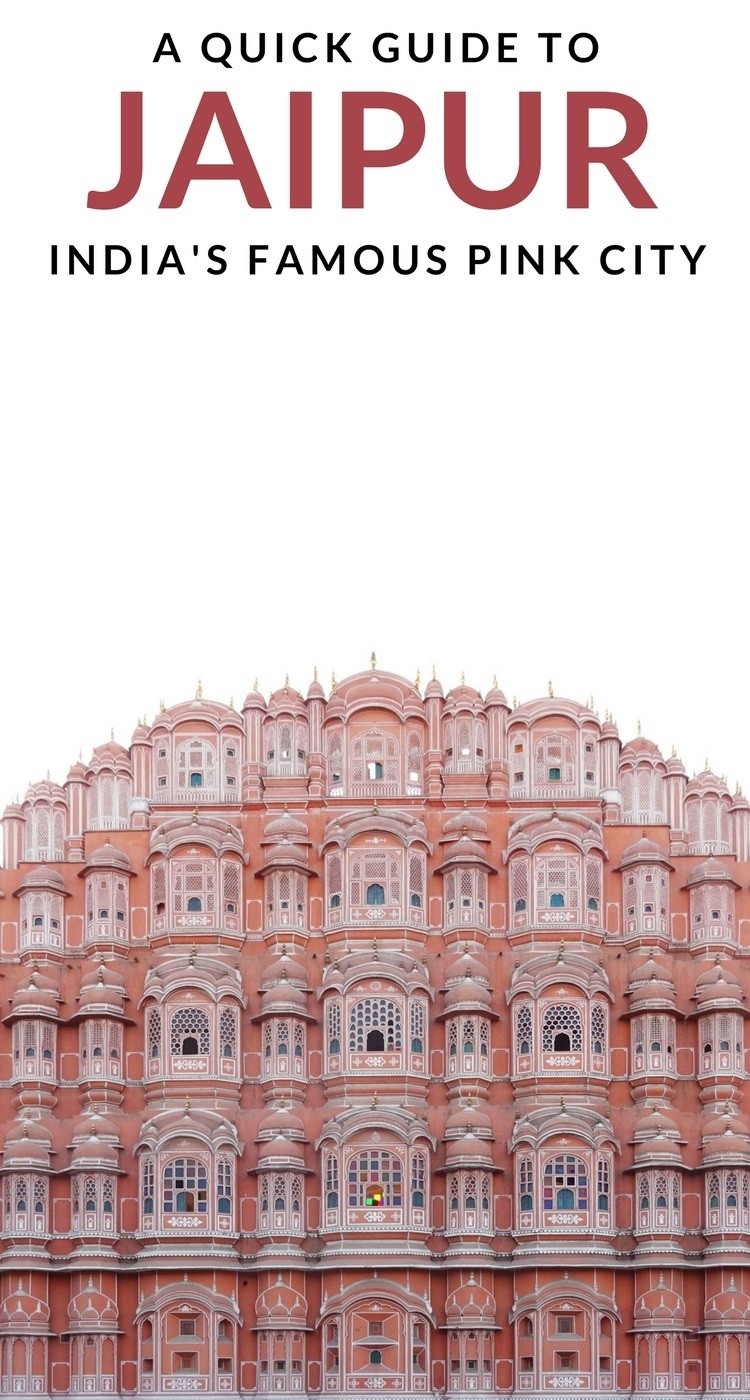