Crazy and Delicious Foods to Try in Morocco

If you’re like me then trying local food when you travel is at the top of the list of “things to do in___”. There are a lot of unique foods to try in Morocco and I’m going to share with you the ones I tried while on a walking food tour with a company called Marrakech Food Tours.

I am so happy to have taken this food tour because prior to it, I was SO disappointed with the food we tried in Morocco. My friend and I found that it was either touristy-Moroccan (not what you would get at home or even at a Moroccan restaurant abroad) or it was International (French mostly, but not the best international and very touristy). We thought wow what’s going on here… It was bizarre since both of us had Moroccan food outside Morocco and liked it.

The guide of the tour explained to us that you don’t find a lot of good Moroccan food in Marrakesh and other cities. Reason being, Moroccan people don’t eat out much and when they do they want International food since they eat Moroccan at home. They wouldn’t pay for a Moroccan meal because they will have a better one at home. It’s a bummer for us foreigners visiting but thankfully on this tour, the local guide (who has an American blogger wife, Amanda) took us to the secret spots. I highly recommend it!

On your tour make sure to talk with them via email before if you want more “freaky” foods or if you want to avoid that completely. You can customize to some extent. You can follow them on Facebook.

Foods to Try in Morocco 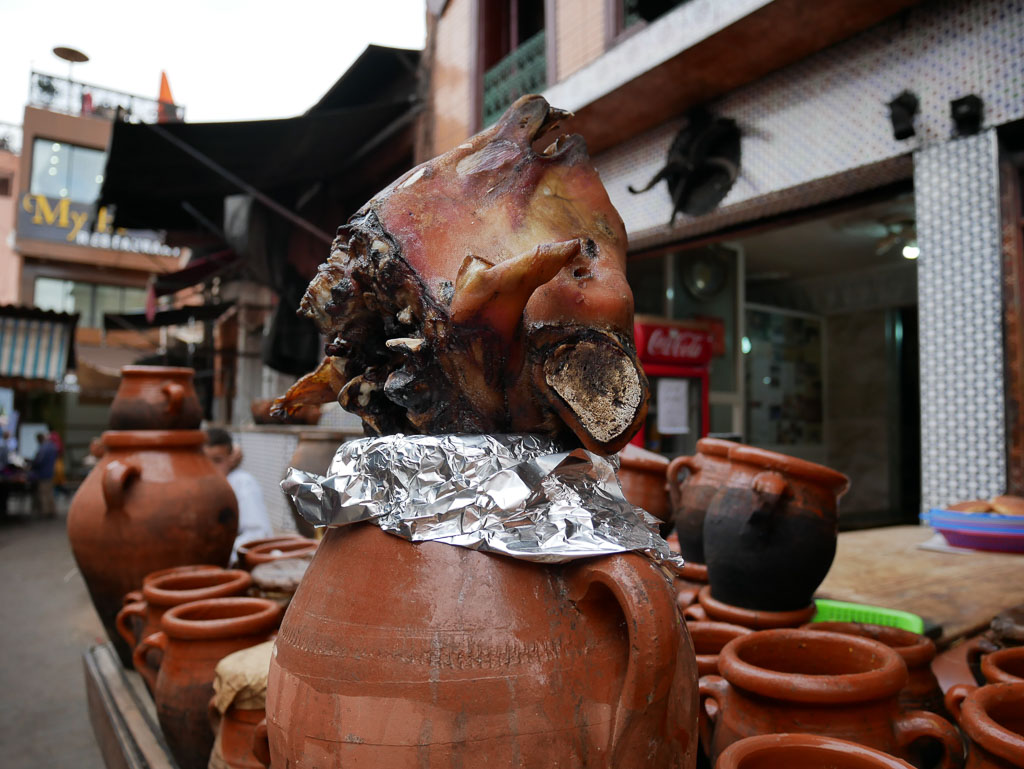 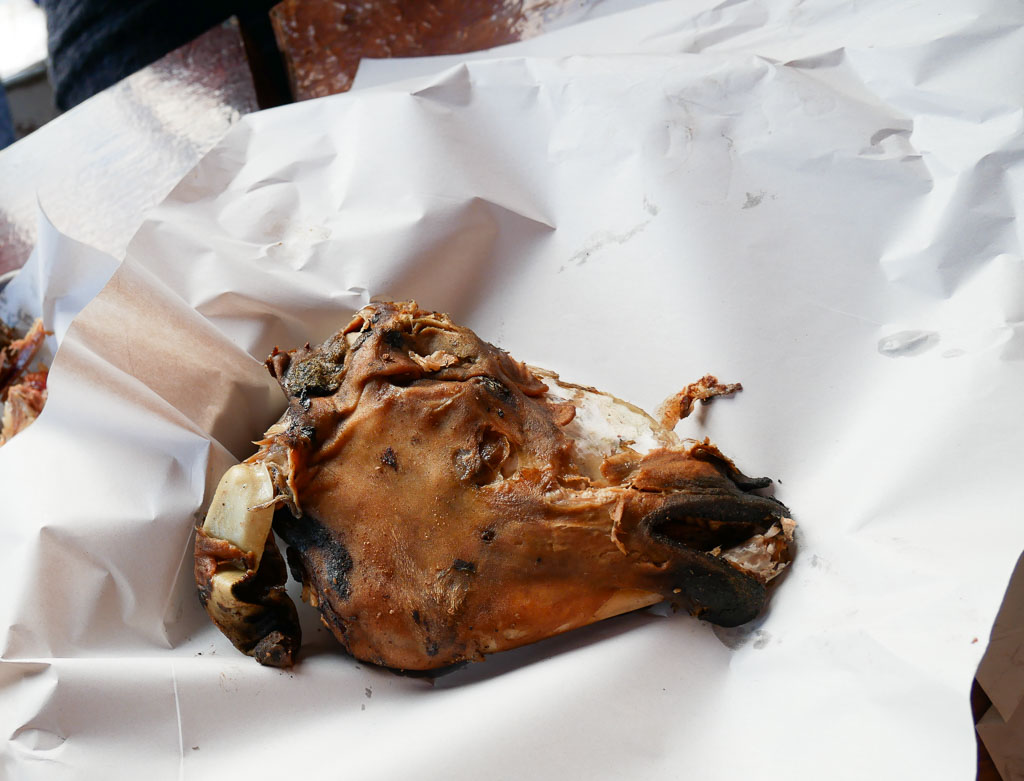 Yes, that’s a head… a sheep’s head to be exact! We saw this outside stop #1 on our food tour. How is it cooked? In the hole below while it’s all still connected. They actually put the entire body down in there.

I tried it and did NOT like it. It tasted very gamey to me and I just couldn’t deal! In our group just one person liked it. We gave the eyeball to the tour guide. 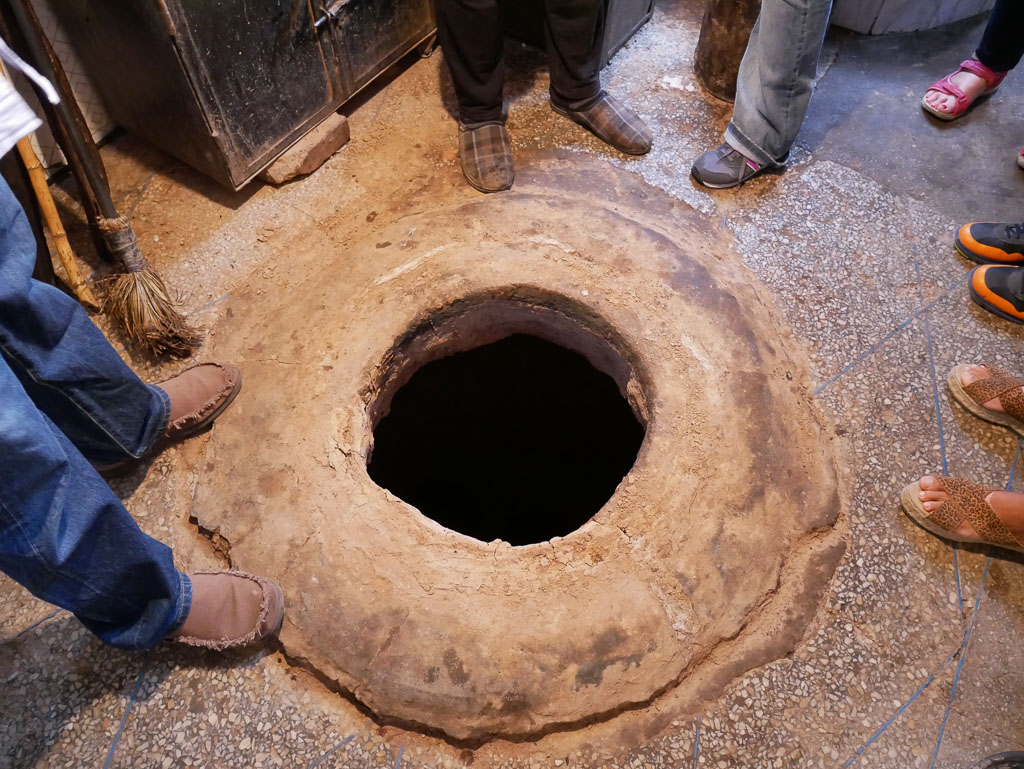 The other parts of the sheep that came out of that hole were very tasty, though. One dish was called tangia (not tagine the common dish). Tangia is just in Marrakesh and is a specialty. 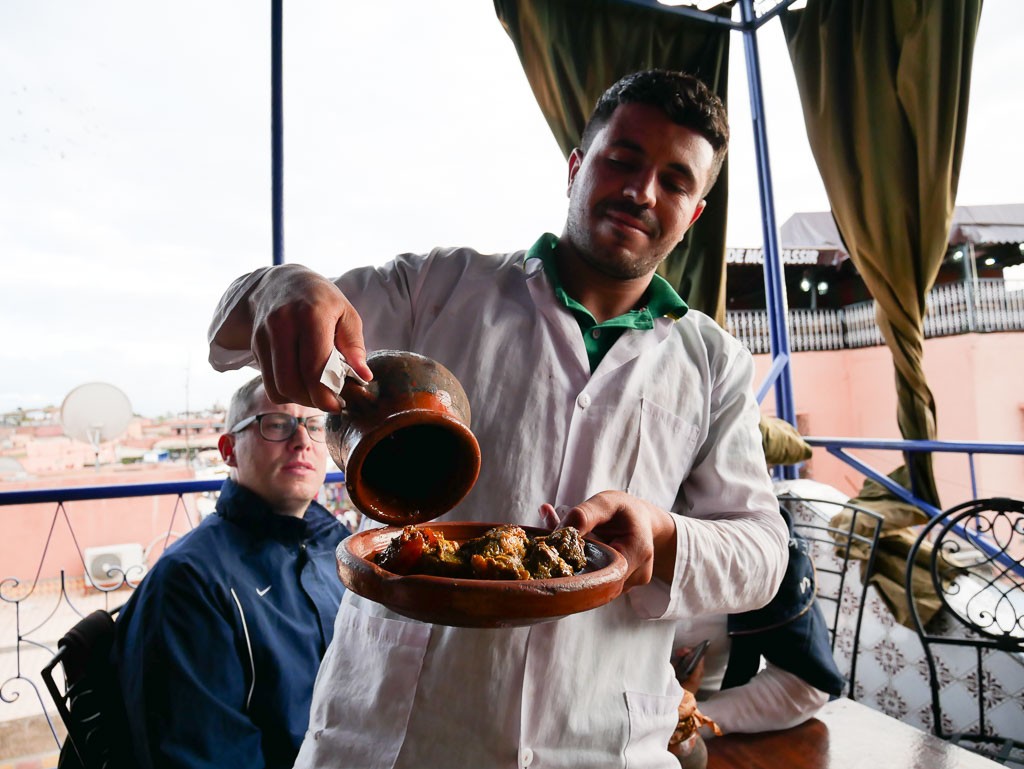 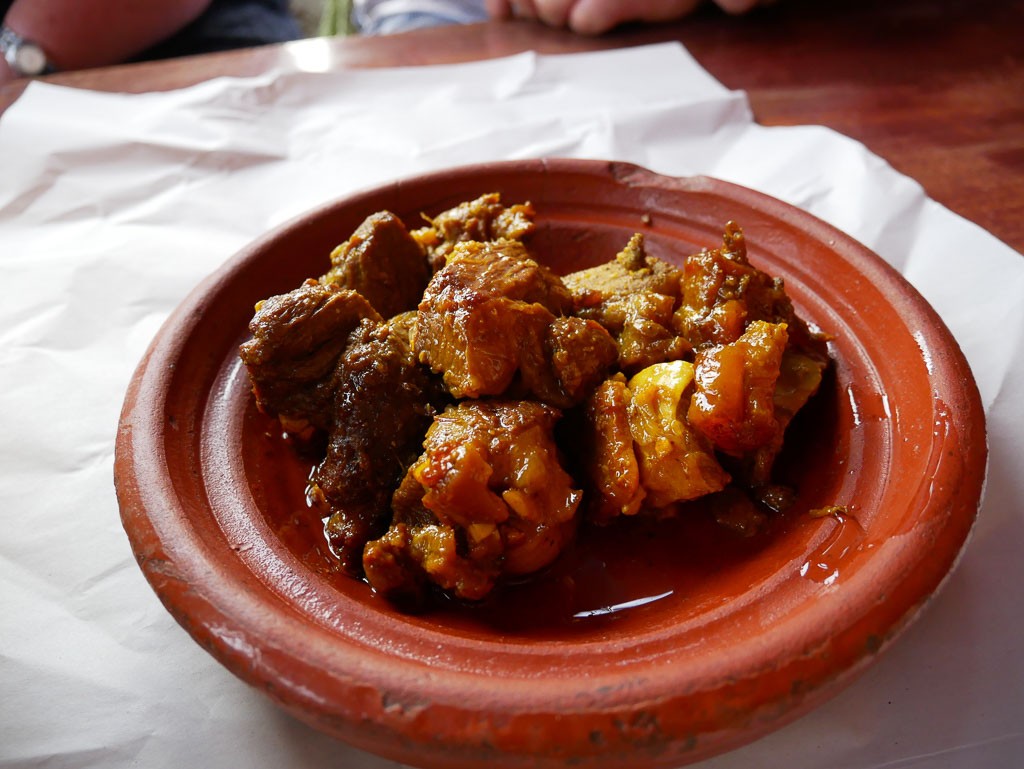 Below was the slow cooked lamb which was just insane. I loved it but what’s not to love? It didn’t have a Moroccan flavor to it that I noticed unless you did it in the spices provided, which I think was a cumin salt mixture. 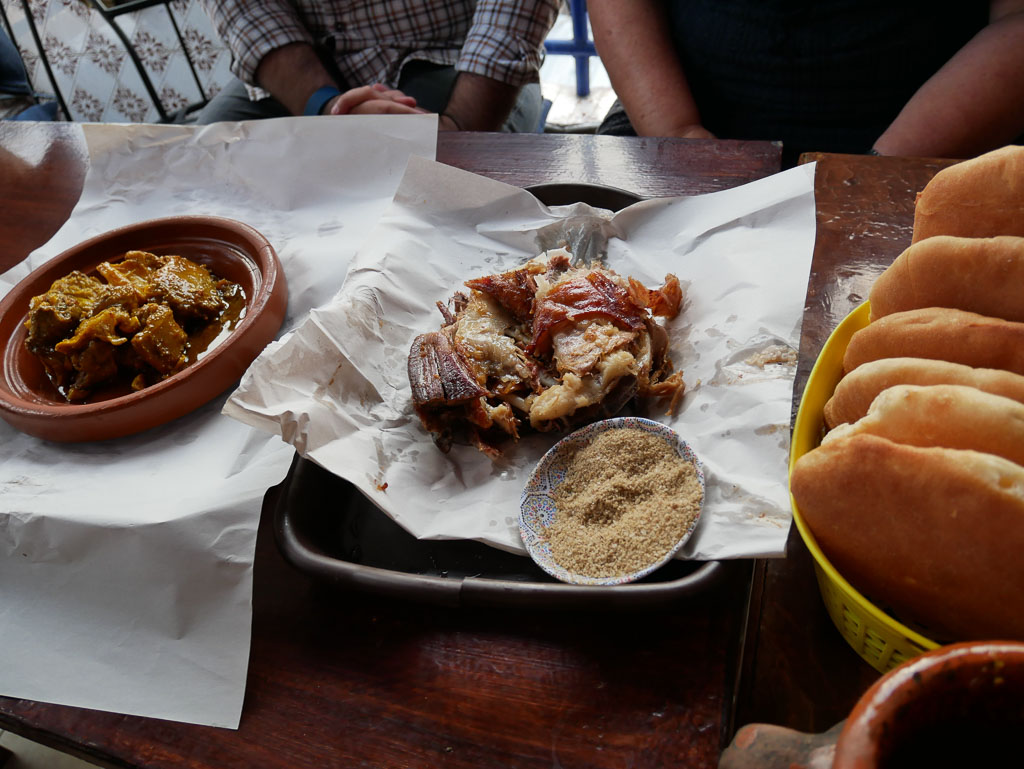 I’m not a fan of olives except maybe a green one hidden in my tagine that I don’t notice much… but they just are too flavorful for me. They are meant to be awesome here though and the group went crazy trying all the different styles of olives. I did try the local jalapeno and damn is it way more spicy than the ones in the U.S. 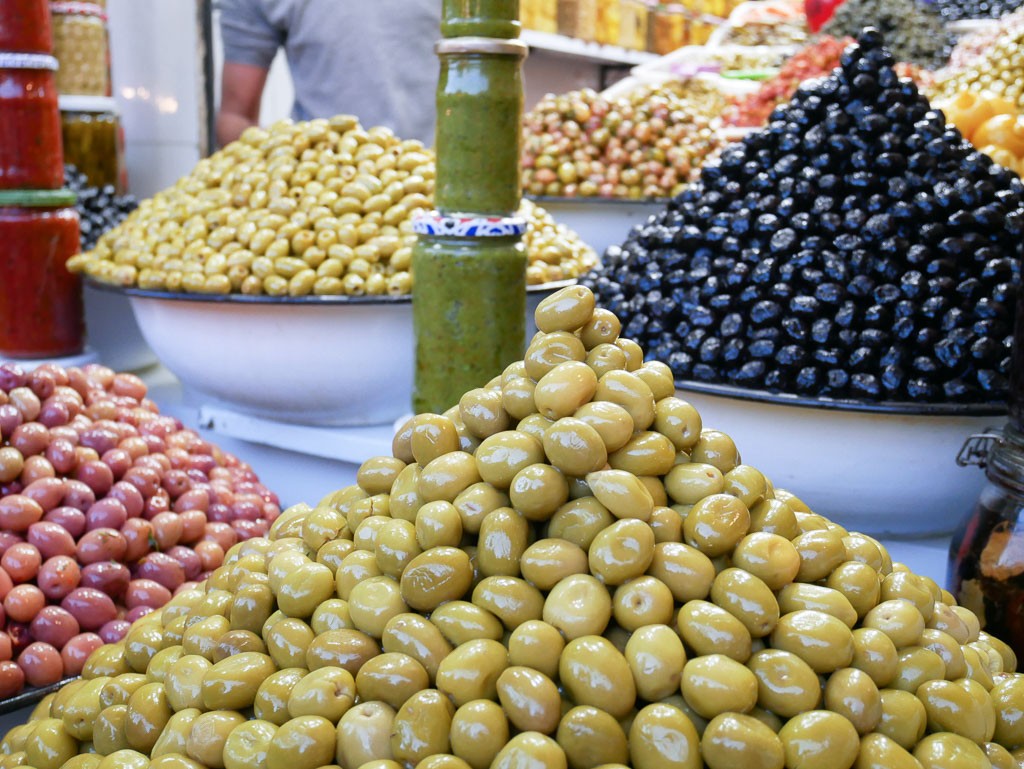 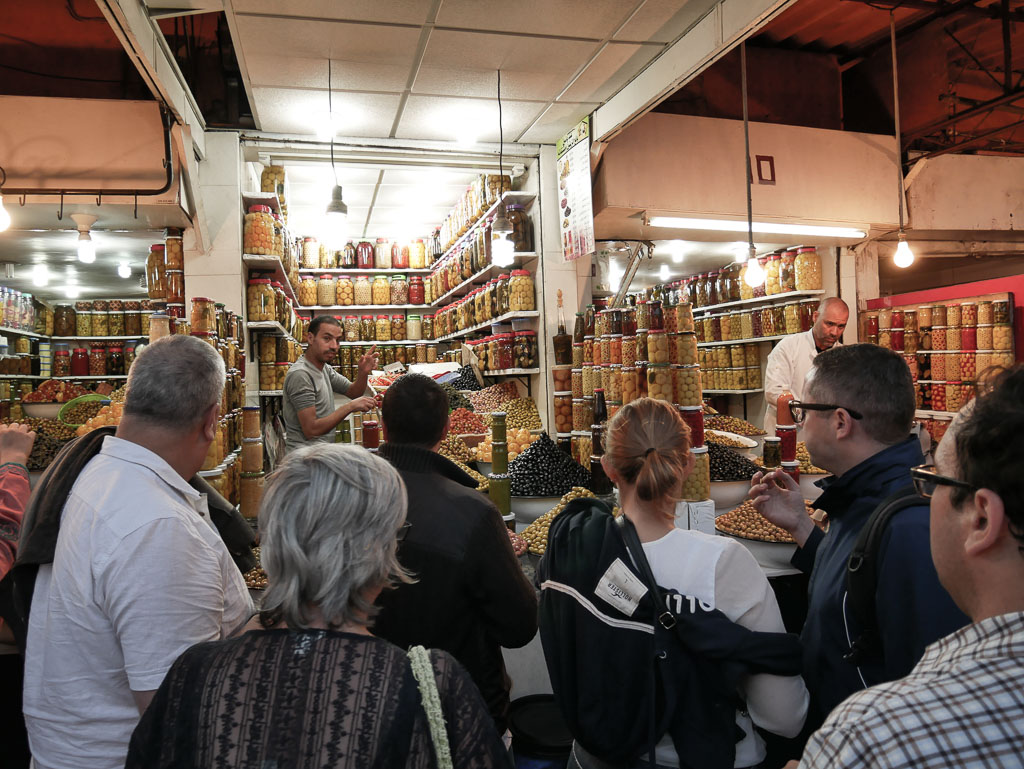 How bizarre is that? Okay, to me it is. They make “meatballs” out of the sardines and most of the group said “are you sure this isn’t beef?” because it just didn’t taste like fish. For me, I knew what it was and mentally couldn’t get over it because I don’t like sardines or any little fishies. It had tomato, spicy sauce, onions, and olive. Actually, if it was beef without the olive I would have liked it… but then that’s just a meatball marinara sandwich lol I’m too American for my own good! Maybe add some cheese ;) 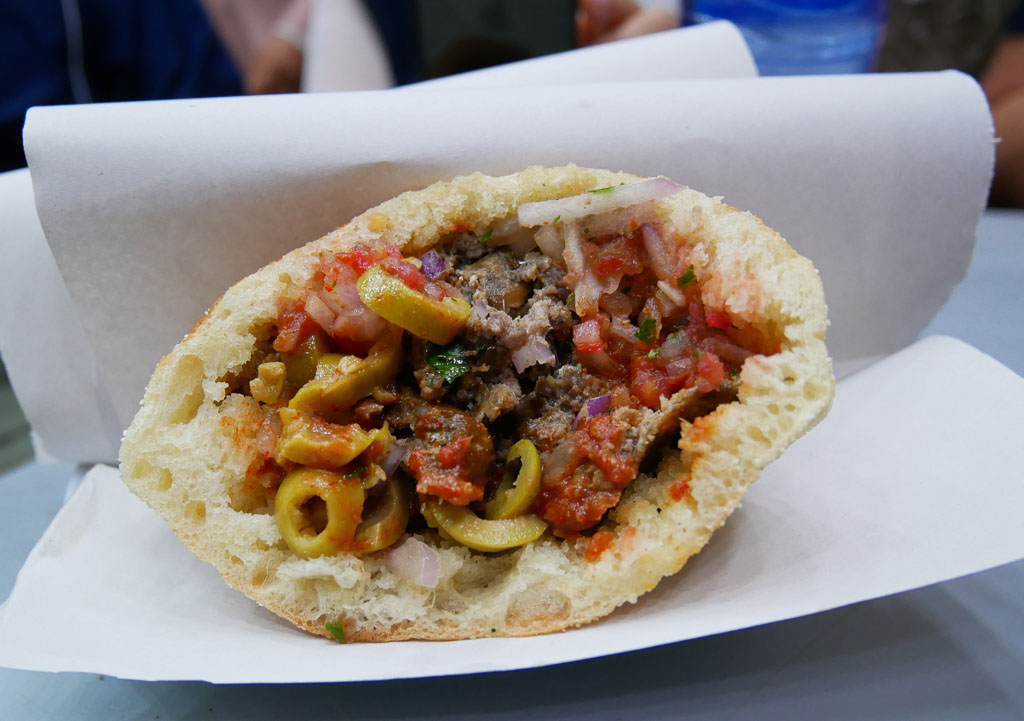 Like all donuts, I do not discriminate and I love this donut. It tasted just like the homemade ones my mom used to make from the Pillsbury cans of biscuit dough. They put honey on it which was delicious. The only thing I wished for was some powdered sugar but that’s because I’m a fatty at heart. 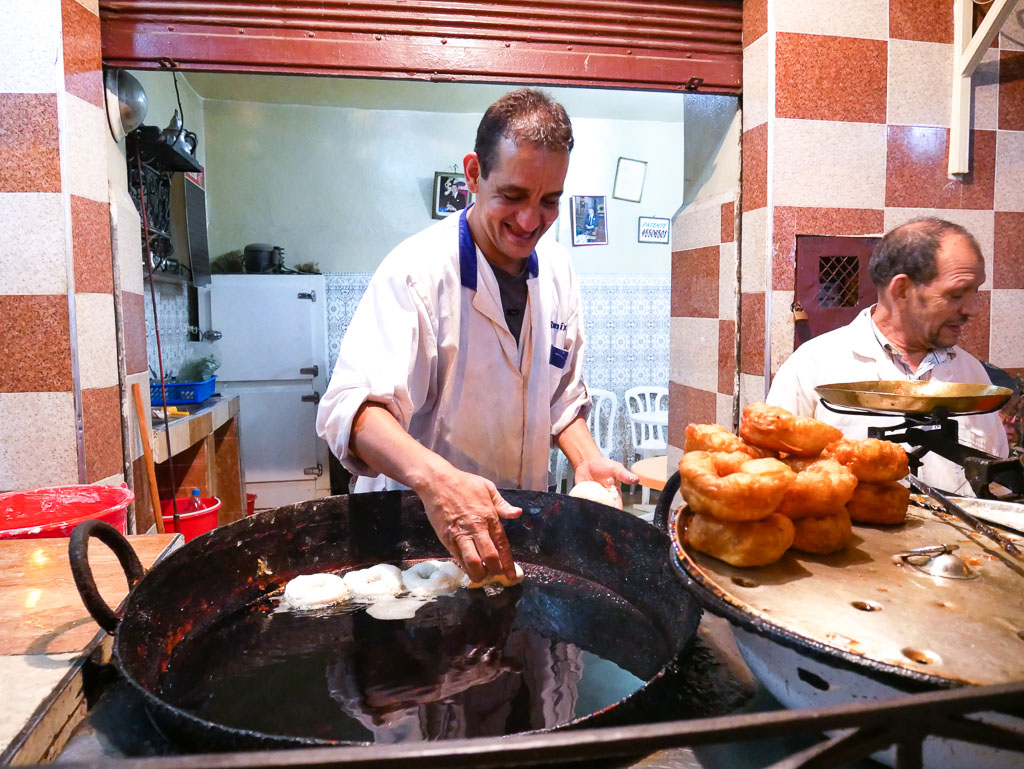 The donut was great but then he went and did this yummy mess of a dish where he put the egg into the dough while it cooked and pushed more dough on top. 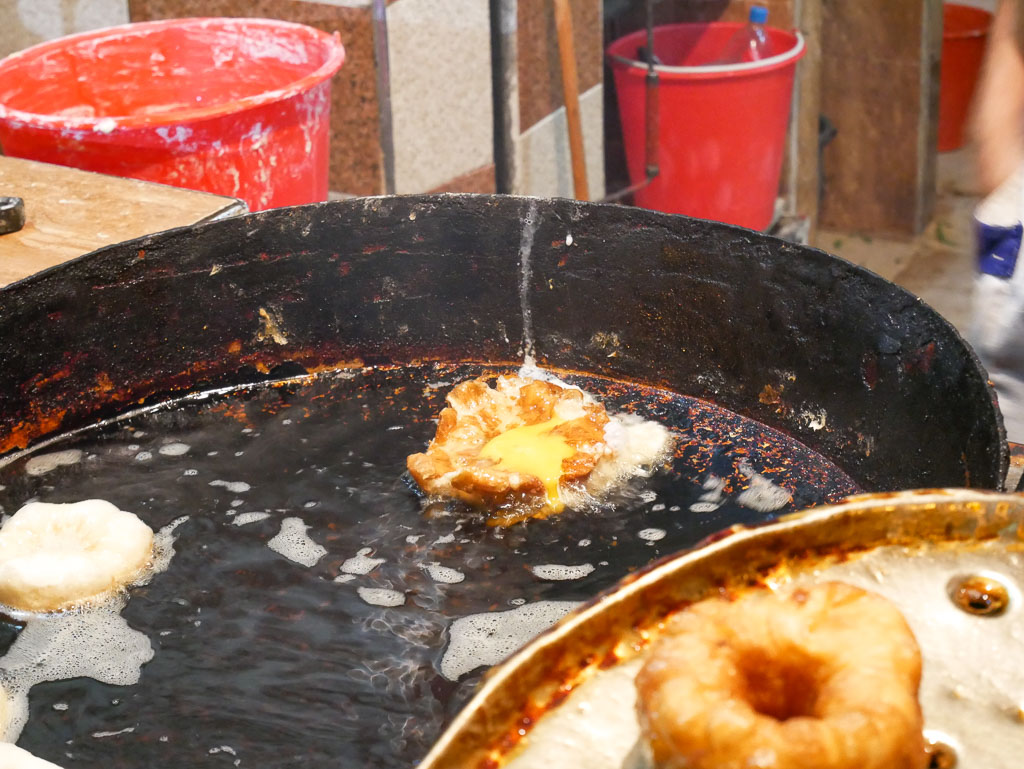 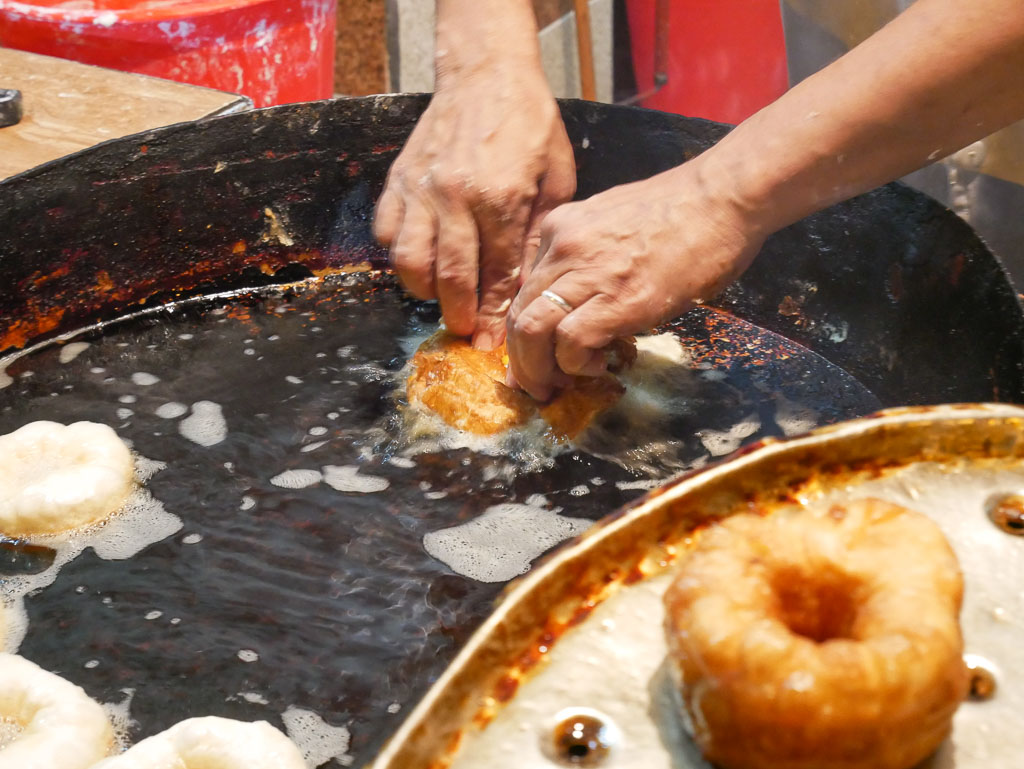 What comes out is “eggy bread” as the Brit’s call it or similar to “French toast” for the Americans (without the powdered sugar). Funnily the French influenced Moroccan life and maybe the food, so I asked if this was brought by the French or if the Moroccans taught the French (I mean why IS it called French toast?) but the guide wasn’t sure.

In Morocco, they have bread guys who do the baking and the locals used to bring their fresh dough to him. He was the pro. As time has gone on, people have gotten their own ovens. But in the heat of the summer when they don’t want their house too hot they still take the dough to the local community oven. 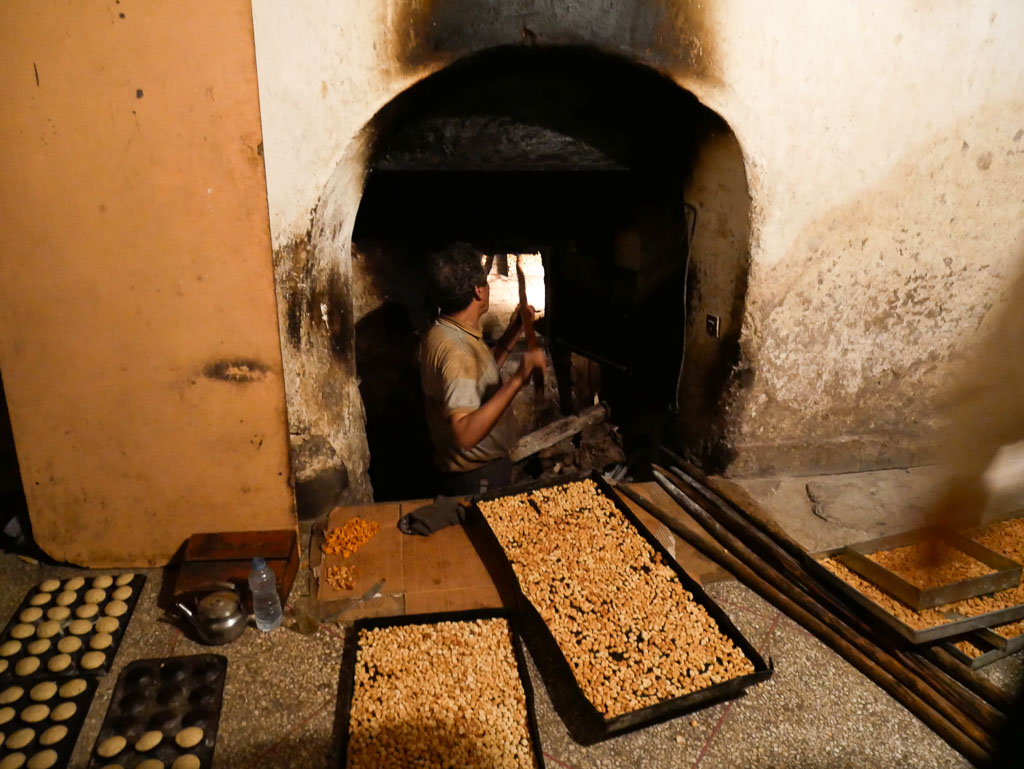 One story I liked was how these local bakers knew everyone in town so they were the marriage arrangers. They would hear from families dropping off bread about their son or daughter who needed to be married and he could arrange.

Before those times, women used to go the hammam and see the young girls naked to see who would make a good wife for their son! How weird is that lol … but times have changed and it’s no longer happening.

Nope didn’t try it, sorry guys! I mean it looked rubbery and it’s an organ. I’d already risked it with the sheep’s head and just couldn’t. 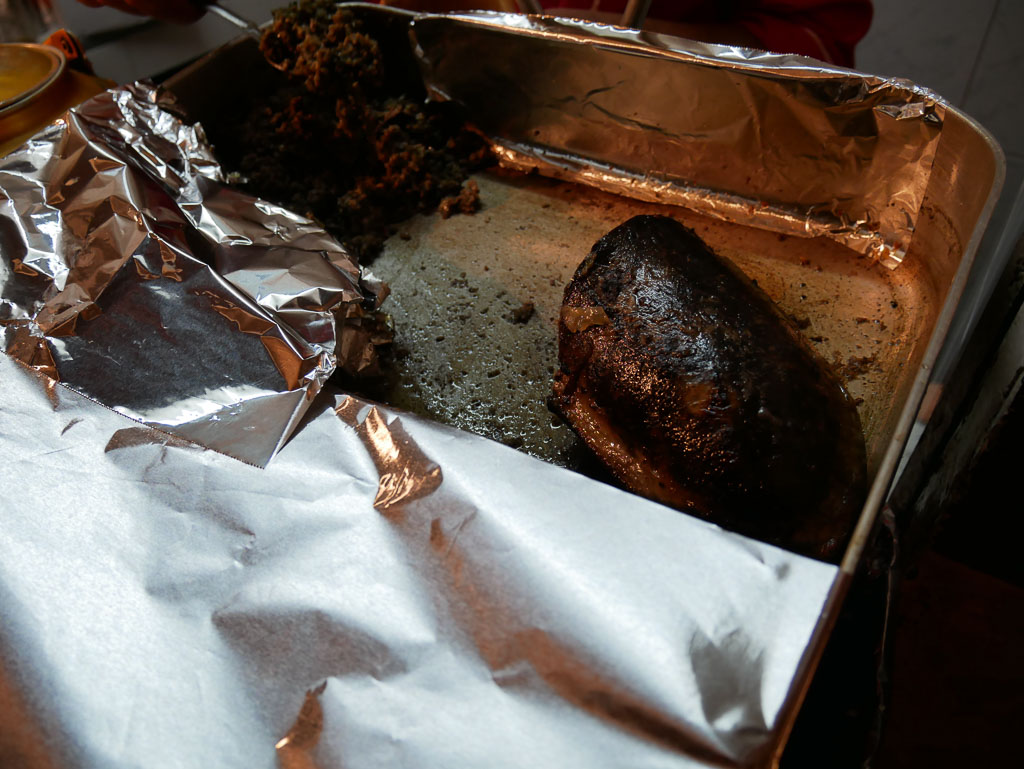 AKA snails. Do you think I tried it? Nope, not even for the sake of research! It was a packed bar though with so many locals eating bowls of snails. I guess this is another French connection. 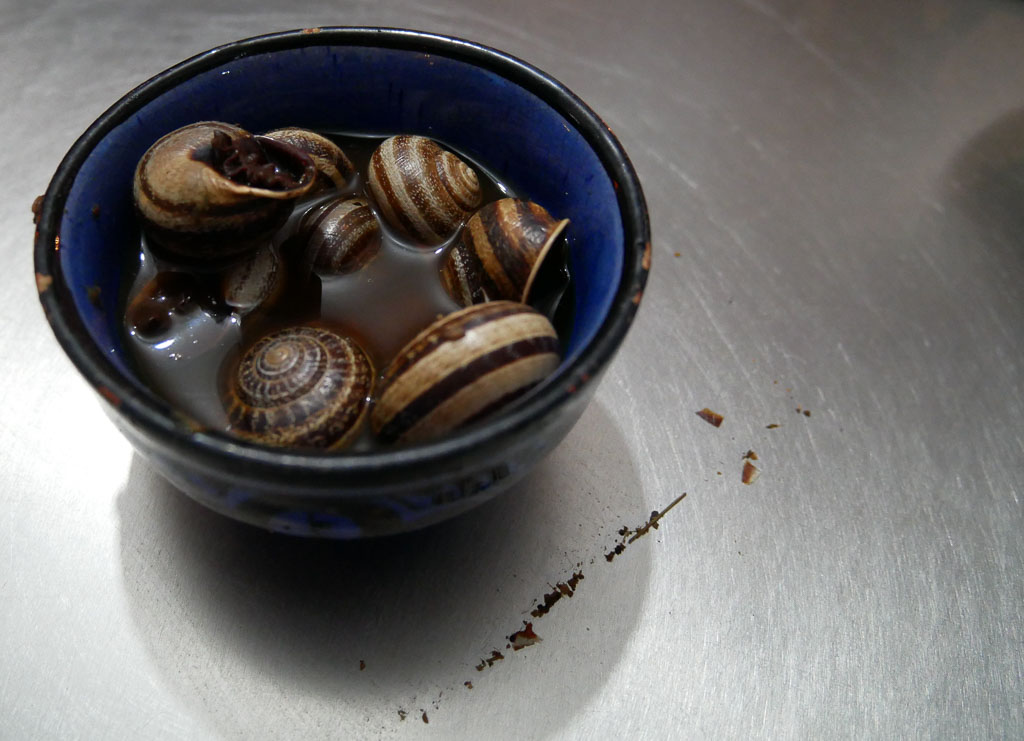 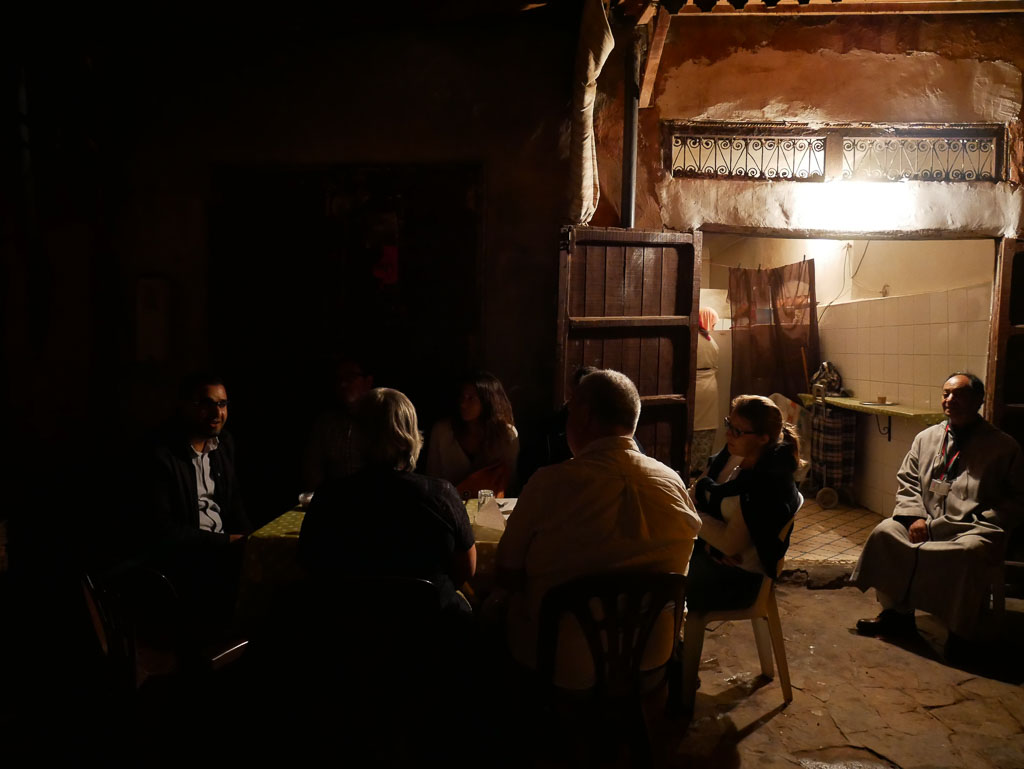 We later went to the most famous (secret) little couscous which is made with love for hours. The process they used was really insane and puts instant couscous to shame. This was so tasty but we were pretty stuffed so couldn’t eat enough. We felt terrible leaving so much behind! The mint tea that is always served in Morocco was served with this. So tasty. 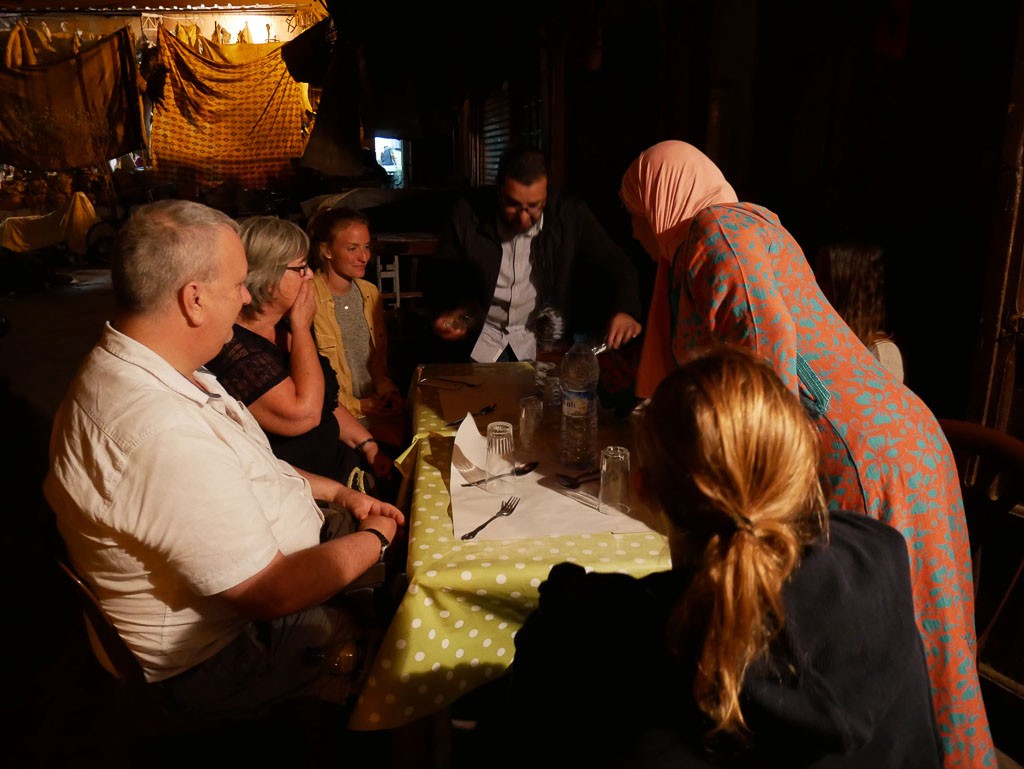 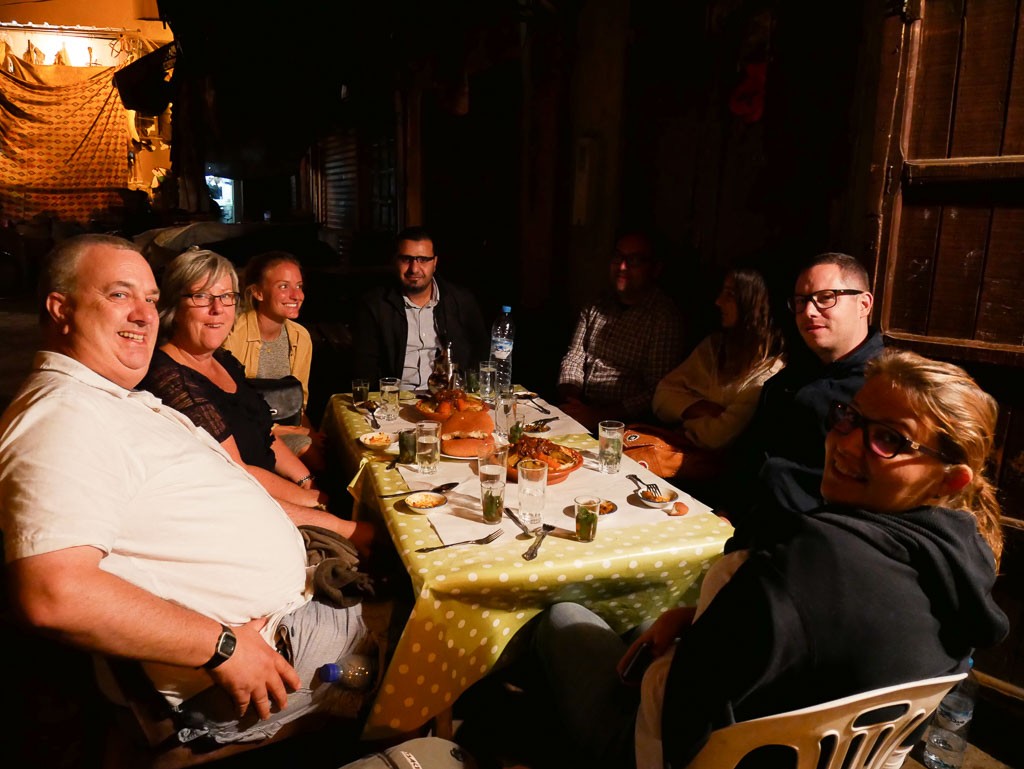 The desserts here are very buttery and sugary, which is obviously a good thing! They each have a similar base of butter, but their own flavors added. I loved the pecan one! The smoothies are unique here like avocado, milk, and dates. Not really my thing so didn’t have a smoothie. I know it seems like I didn’t try much, but I’m more of a meat eater! 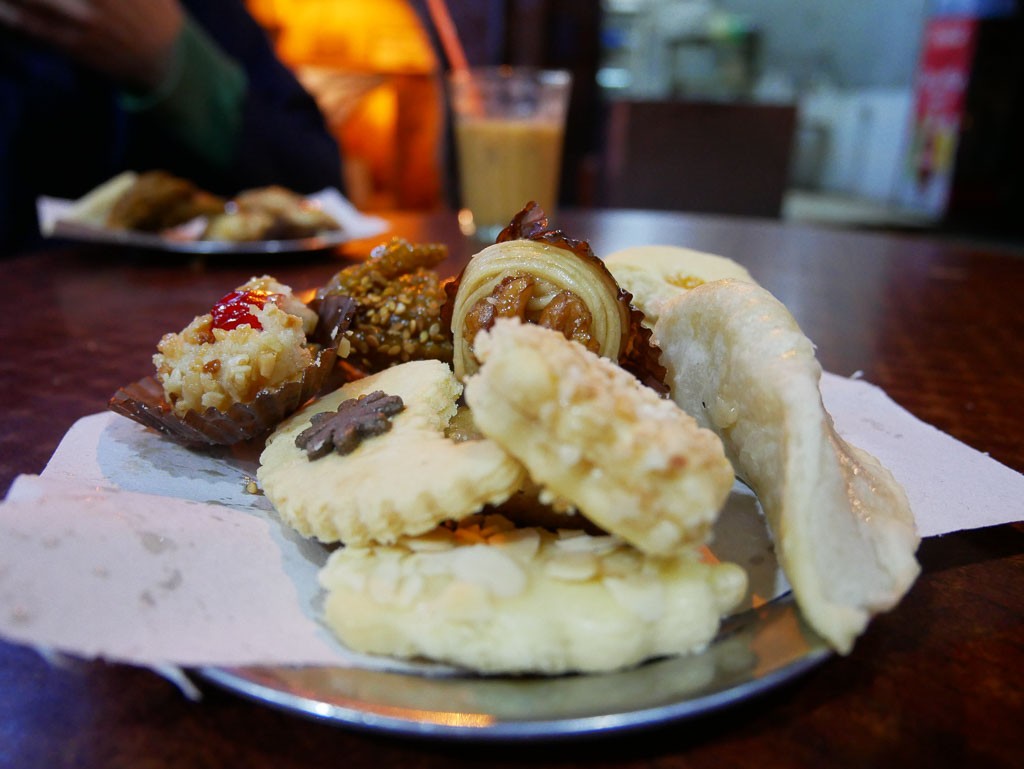 When I travel alone or with a friend, I love to sign up for group things every so often. I am not one to get SO excited over new things and I really enjoy seeing other people’s reactions to what they are seeing and trying. I like to hear what questions they have. That actually helps me to learn about places because I might not think to ask the questions myself. The tour was great and the group was very fun to get to know. 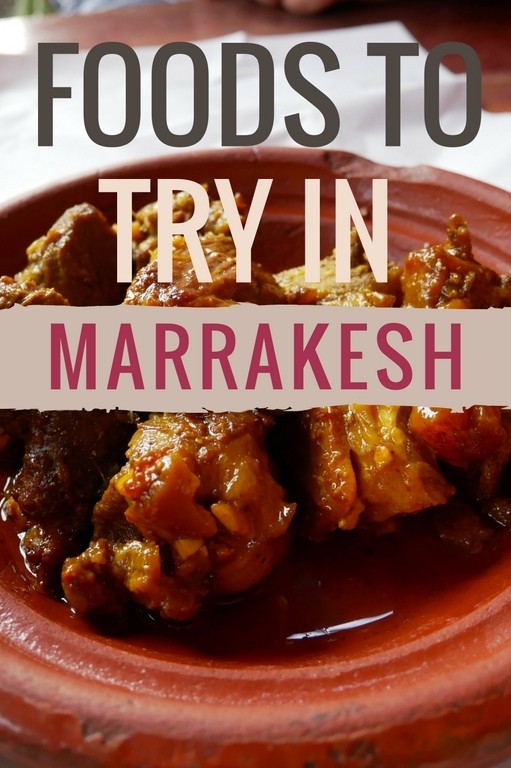