I will break it into sections of booking a ticket, which train class to book, foreign tourist quota, tatkal, waitlist tickets, and safety. Please note that I also have an article on how to travel India by bus and another article on safety for trains and buses in India (which also touches on when to take which).

Booking a train ticket in India

The easiest way is to use 12go.asia who book you a true Indian railway ticket and email it to you at a fee of like 50 cents (more information here). You cannot book on the Indian railway site yourself, as they, unfortunately, do not accept foreign cards – only Indian. This is best if you want to book online before your trip. The prices listed are the same as on the Indian rail website, then they add their fee.

You may prefer to wait and use a travel agent in India. This is about the same thing as having 12go.asia book your ticket, except you’ll go into a little travel agent office in India and do it in person. You’ll pay about 100 rs ($2) to an agent to book for you and give you the train ticket. Most people want to book ahead because trains can and do fill up. It is worth it especially in peak season of December and January or on popular routes like Udaipur/Mumbai or Mumbai/Goa.

If you decide to wait and book in India, make sure you have what you need. You must have your passport and in some instances a copy of your passport. You always need photos and paperwork handy in India. If the station is close you should go straight to them to book, but there’s nothing wrong with using an agent. I had a hell of a time getting almost scammed on a train out of Delhi, and you don’t want to end up with a fake ticket.

You want to look at the Indian Rail website and jot down the information to take into the booking office if you are having them book for you. You’ll have an idea of when you can head out and how much it’ll cost so you aren’t scammed. Make sure you have a form filled out completely before you get to the front of the line. If you aren’t in a tourist line, beware of line jumpers! Don’t get into an argument, but simply say, “this is my place. You are behind me.” Usually, they are annoyed but a little embarrassed to be told off by a foreigner. You have to learn to be a little more assertive in India or you’ll never get anything done.

I HIGHLY recommend that you stay online in India. You can get a SIM card and put it in an international unlocked phone. If you don’t have a phone like this, try Trabug. Trabug is a travel phone that you can have shipped to your hotel in India. This phone has the internet and all kinds of India travel apps on it. It’s more expensive than a SIM, but SIM cards are sometimes a huge hassle for foreigners in India. You don’t want to be in India without access to the internet. 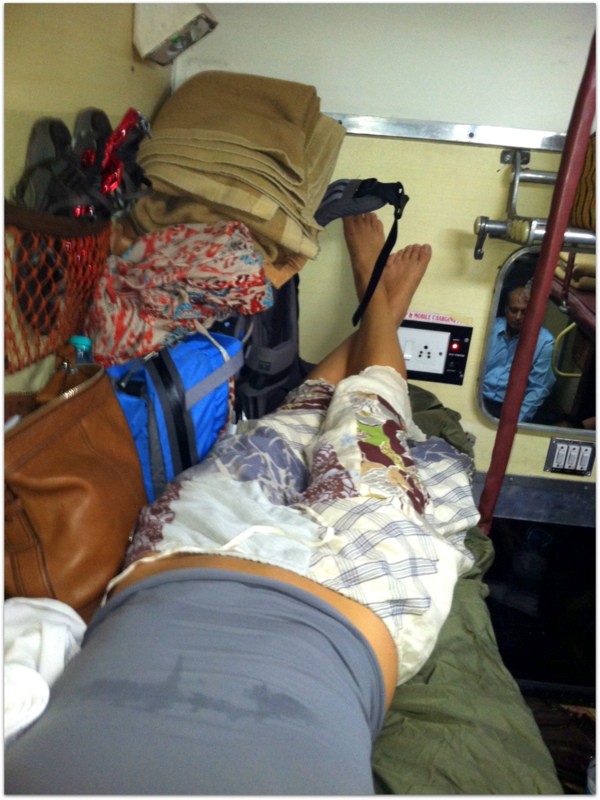 yes, I’m all sweaty because it was over 100 degrees, but at night you’ll be happy 2A/C has a blanket!

Which Train Class to Book in India

You not only book by class, but by tier, meaning how many berths there are in the compartment. Second class 2 tier will be more expensive than 3 tier.

I hear whisperings first class is nice, but I wouldn’t know….

I took the three tier A/C once (referred to as 3A) from Bombay into Udaipur, 17 hours, for 1755 rupees. This was a lovely train ride. A/C was a little too cold but blankets were provided and food was offered at an extra fee.

I advise you to request upper tier at time of purchase. When it’s time to wake up in the morning, the bottom and second tier are put up so that people can sit on the benches and eat breakfast (yum samosas!). If you are on the top tier you can lie down and sleep the whole trip. Make sure you wake up for a little bit to get some chai; they sort of don’t let you sleep through their offerings, “Chaiiiiiiiiiiiii!!!!!!”. You’ll hear it all morning! Some say don’t eat and drink unless it’s packaged, but that’s not really living, now is it?

I preferred to go the cheaper route after seeing how nice the trains were and went sleeper class or second from there on out. The busiest sleeper trains I took were in areas like Delhi, Allahabad, and Varanasi. Even so, I still have no qualms with sleeper class. You can expect an assigned bench to yourself, although others may crowd in. Nothing will be provided; doors will be open therefore very windy and cold at night.

There is also second class (not to be confused with second class A/C). This is not a sleeper. These are just free-for-all benches that you can fight over and cram in. People will be sleeping in the isles, some even sleeping while standing up! I’ve never seen anything like it.  It’s shocking and smells faintly of urine, but exhilarating and a must do at some point during your India trip. I only took this class twice but LOVED it.

As a foreigner, people are curious about you and that makes this a perfect time to chat with the local people. Although “chatting” means an Indian man asks you so many questions you can hardly keep up answering. “Where are you from? Where are you going? What do you study? Are you married? What’s your father do? Do you need a tour of my hometown?”

Curious fellas.  I have been videotaped and photographed while pretending to sleep or while looking at them with an expression of “ok, that’s enough now”. To pretend I didn’t deal with frustrations would be a lie, but looking back it wasn’t that bad. 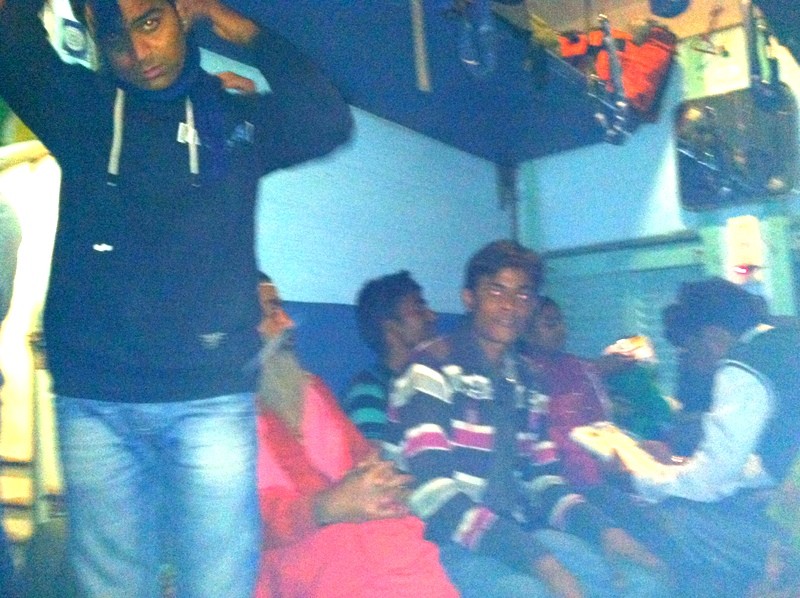 India really wants you here! So much in fact, that they have a certain amount of tickets that haven’t been sold just for you. You need to go into the station and wait in line at the “foreign tourist” line. These are “emergency” tickets therefore you can only do this the day before or day of travel. This is how I got out of Bombay to Udaipur on a “booked” train. This is not for Indians or anyone on anything other than a tourist visa.

With RAC on your ticket, it means you are sharing a seat with someone unless they cancel. Better than nothing right?

There’s a good chance I’ve overloaded you with information, but perk up, this is important! I was struggling to get to Delhi from Varanasi for a flight and Tatkal saved me. These are emergency tickets for anyone. You will pay up to 200 rupees to use this service and it is not offered at all stations.

Here is how it works: Tatkal starts at 10 A.M. for one hour only. Whatever the booker can get booked while tatkal is on will count as a ticket. He will pull out applications from the pile in the order in which they were received. You need to show up when the office opens, no later than 7 A.M. to be in the front of that pile. Wait until 10 A.M. when things get manic and he starts inputting data and printing tickets. I arrived at 7 but the line was already long in Varanasi. By 8:30 he had my paperwork and I barely made the cutoff during tatkal. Luckily, I got a seat! This ticket cannot be refunded or canceled.

Non-used tatkal tickets are then released to those waitlisted. This is better than being on a wait list. Sound crazy? Don’t forget there are almost 1.3 BILLION people in India. There’s a little more to it that’s a bit too hard to explain (and understand) like when agents can access tatkal- some can. Because of misuse, this information and timings are changed regularly.

Getting Off Your Train

You really don’t want to sleep through your destination. Unlike Europe, there is no one announcing the stops. You need to set an alarm and be aware of where you are. If you are a small stop, you may have only a few minutes to disembark. Be prepared.

If at your destination you cannot check into your hotel for hours, you can leave your belongings in the cloakroom for about 20 rupees. If you arrive by train at 4 or so in the morning, keep in mind most buses don’t start running until 7, even local ones, so you might have to hang out to catch a connection.

I have an entire post dedicated to safety on Indian trains and buses. I think sleeper buses are safer as a solo traveler that lowest class train because you have a little door you can slide shut so no one even needs to know who’s inside. Many sleeper trains I took were mostly men and although trusting of the universe, I did sometimes get a little jumpy. The real worry is that the train will derail. Trains crashes happen everywhere, but I sure seem to read about a lot of Indian ones.

Now that you are caught up on traveling India by train, here are more tips for planning your India trip 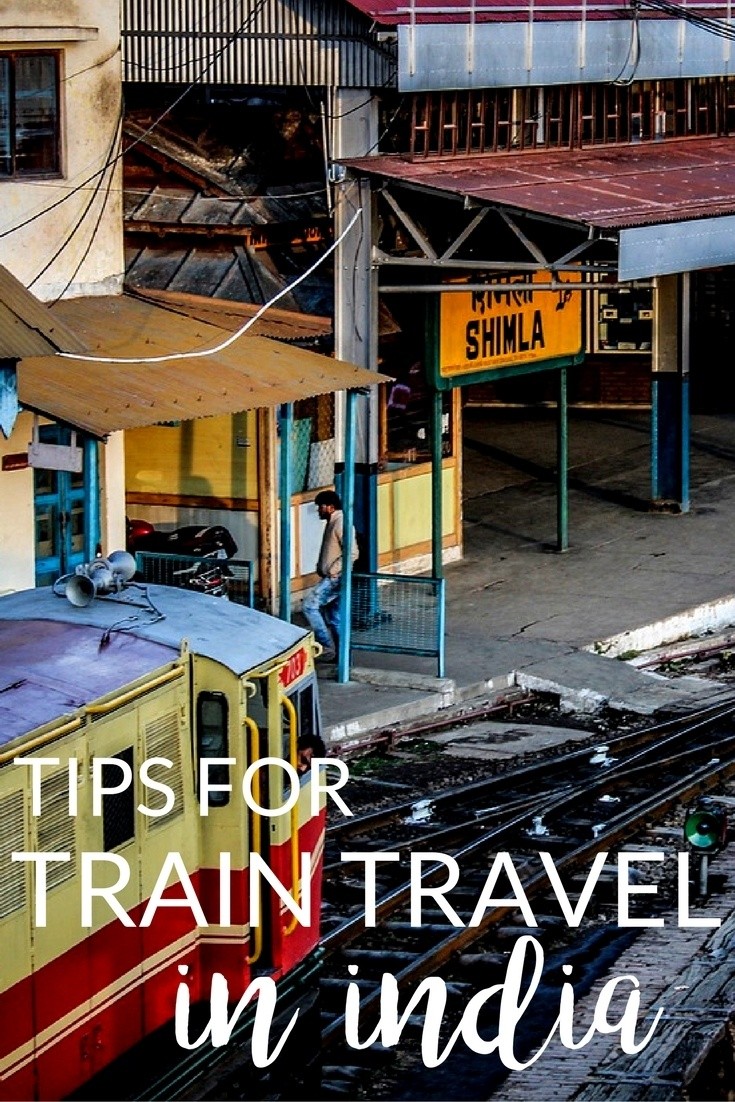