There’s a Million Reasons to go to Paris, But This Round Trip Flight For Just $377 is the Best One!

There’s something about Paris. When I first went to Europe, there was no other place I was more excited about going to than Paris. It’s got a dreamy quality about it, but it’s not just a Hollywood manipulation – from misty gray mornings following your nose as you track down the best croissant to strolling the aisles at Port St Ouen looking for vintage finds, Paris has a “certain something” that can’t be missed. There are a million reasons to travel to Paris, but did you know that you can get a round-trip flight from within the USA to Paris for just $375? This is cheaper than when I just flew to Florida from Ohio! The trip of a lifetime to Paris isn’t out of reach. 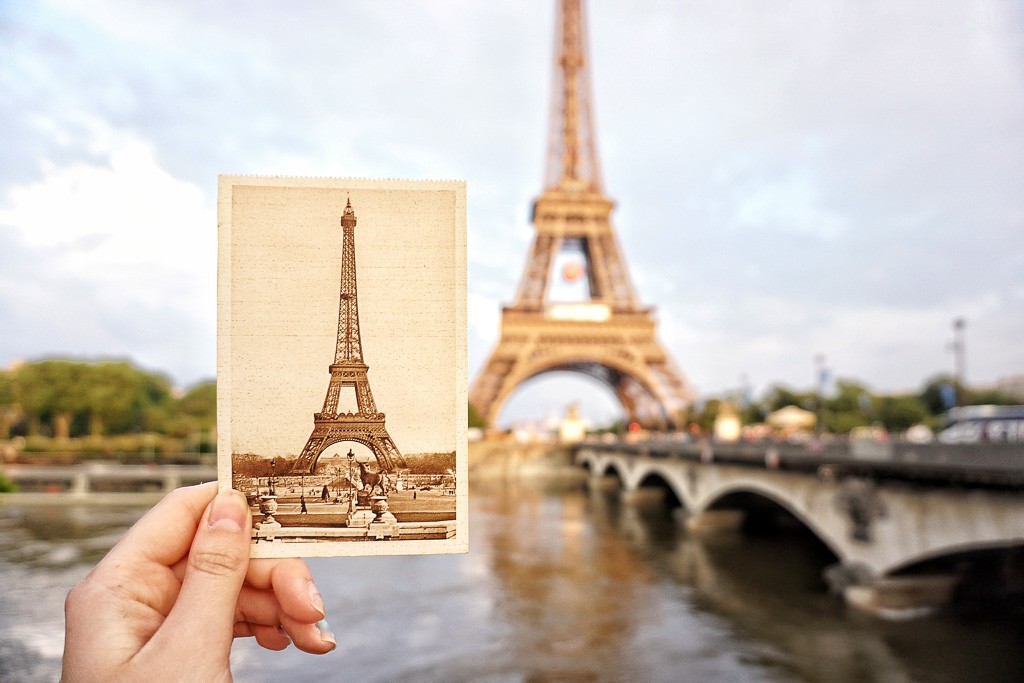 This vintage postcard was bought for €1 at Port St Ouen, a vintage shopper’s heaven in the North of Paris. The flea market here is said to be one of the largest of its kind in the world. 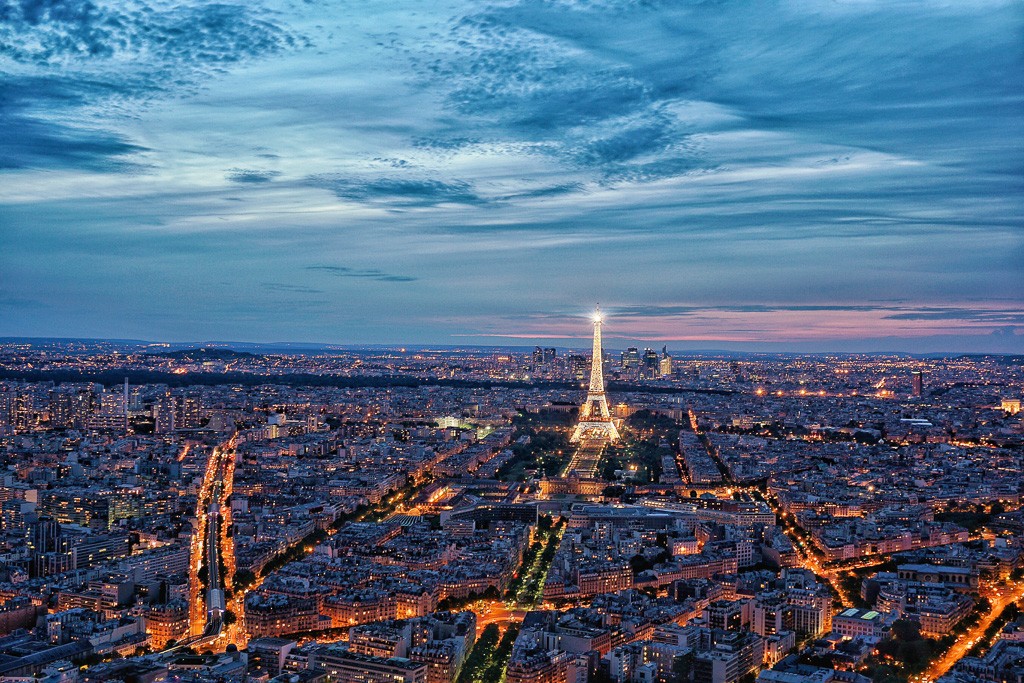 One of the best views of the Eiffel Tower is from the top of Tour Montparnasse – 210 meters up!

Cheap Flights to Paris With Next Vacay

I think people have it in their heads that it would cost thousands at a minimum to go to Europe for a week, but it really doesn’t have to be that way if you are proactive about planning for your trip. I use Next Vacay to be on the look out for the crazy low price deals they email to me a few times a week. They emailed this deal of $375 to Paris and I just had to share this with you because I feel like it’s SO much more affordable to travel to places like Paris than people realize. I love that Next Vacay makes these deals known which makes dream destinations more accessible for us to travel. (I actually listed them in my favorite 9 websites I use to plan my trips and wrote a full review you can read here.) 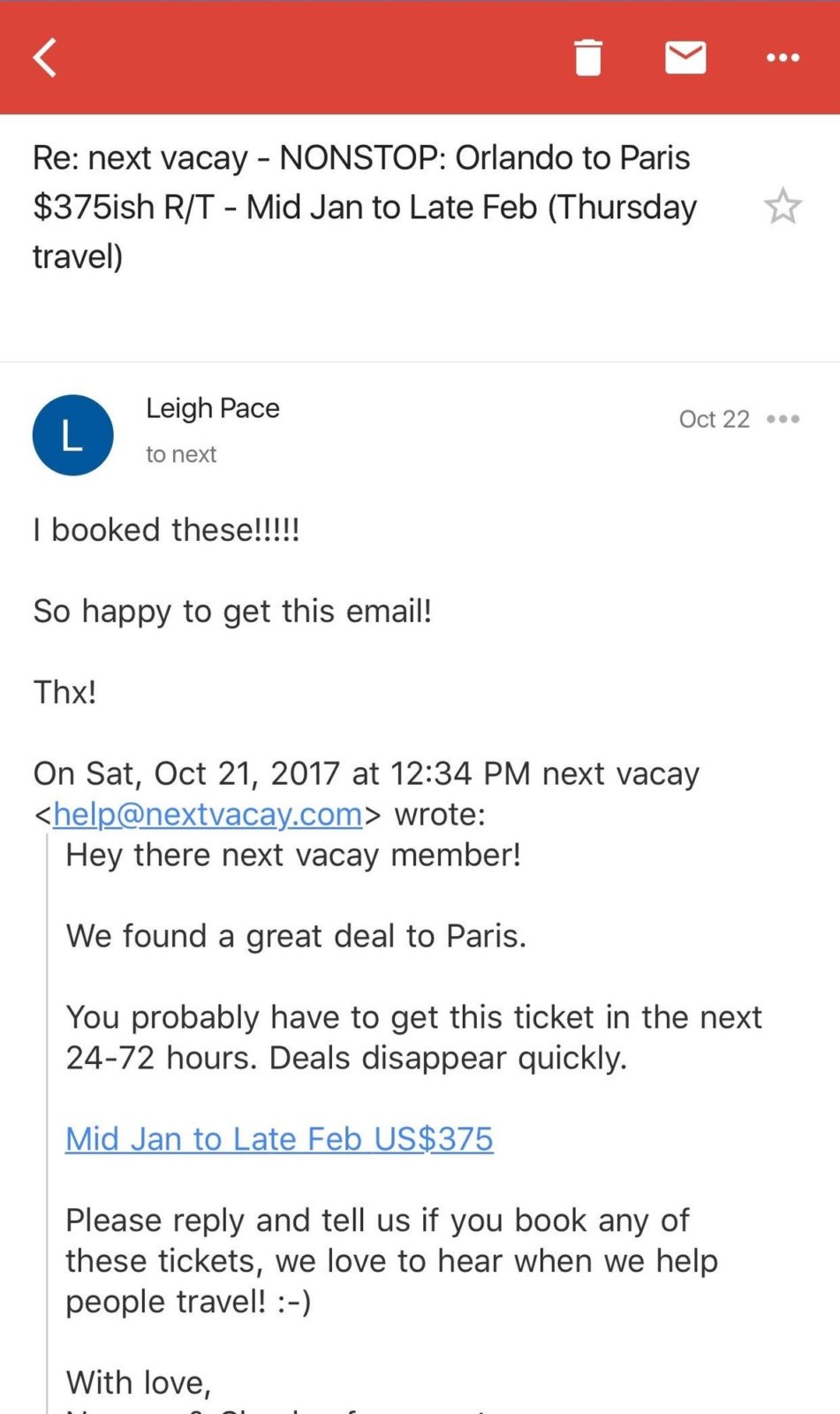 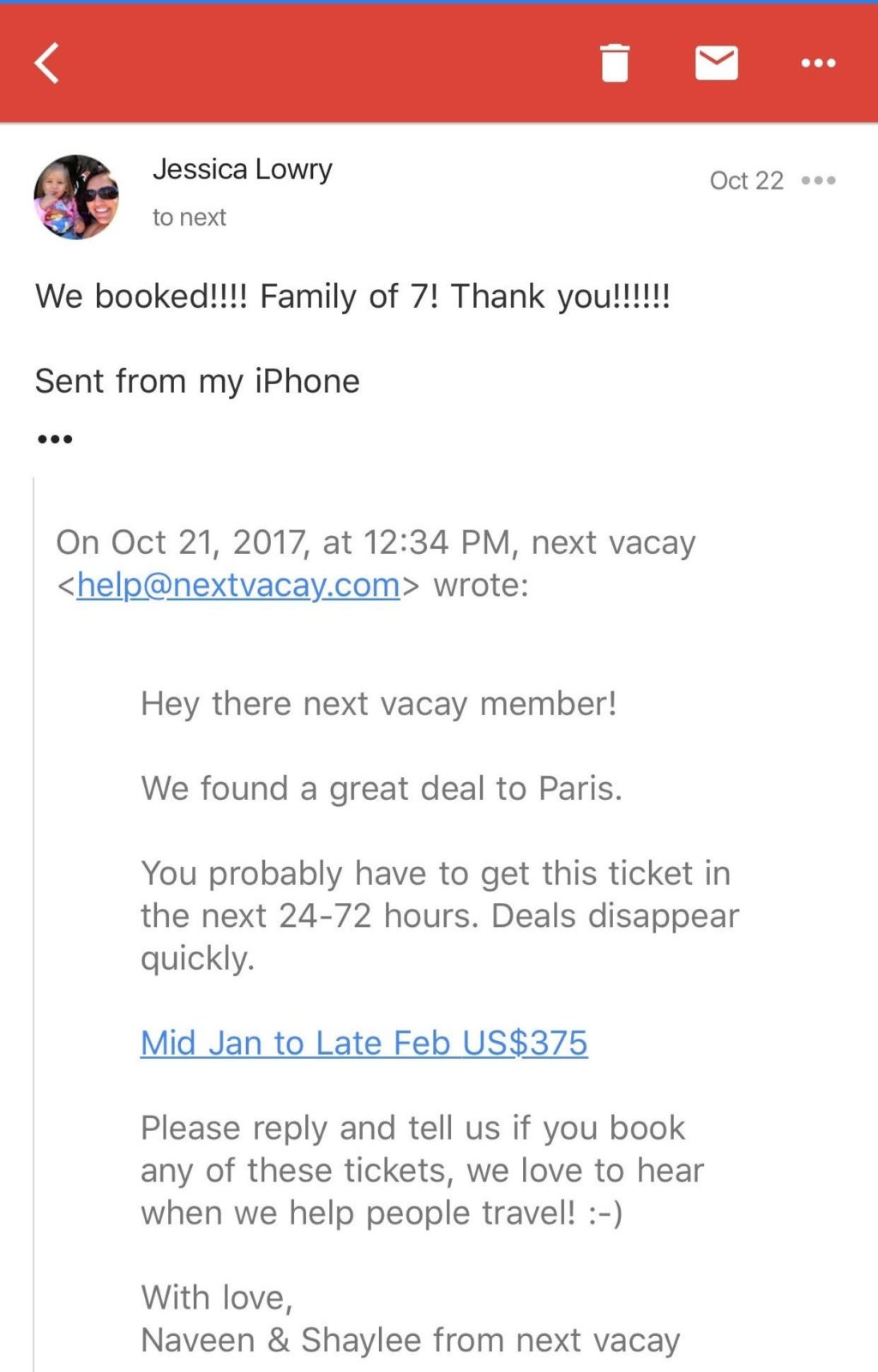 Once you’ve got your flight, the next step in planning a trip is to find a hotel. I always tell people to research a bit first to see what area/neighborhood you want to be in rather than finding out later the amazing deal you found means you have to take a taxi 30 minutes into town each day. If you can find hotels in neighborhoods of Marais or St. Germain, you’ll love these areas with cool boutiques and shops selling baguettes on every corner. While you might think it’s great to be near the Eiffel Tower or Champs-Elysées, I don’t actually recommend these areas unless you’re rolling in the dough.

Because you are saving so much on a flight if you use deals like this from Next Vacay, it means you’ve got a little extra to use to get a nice boutique hotel or get a cheap hotel and use it to macaroons and nice wine. 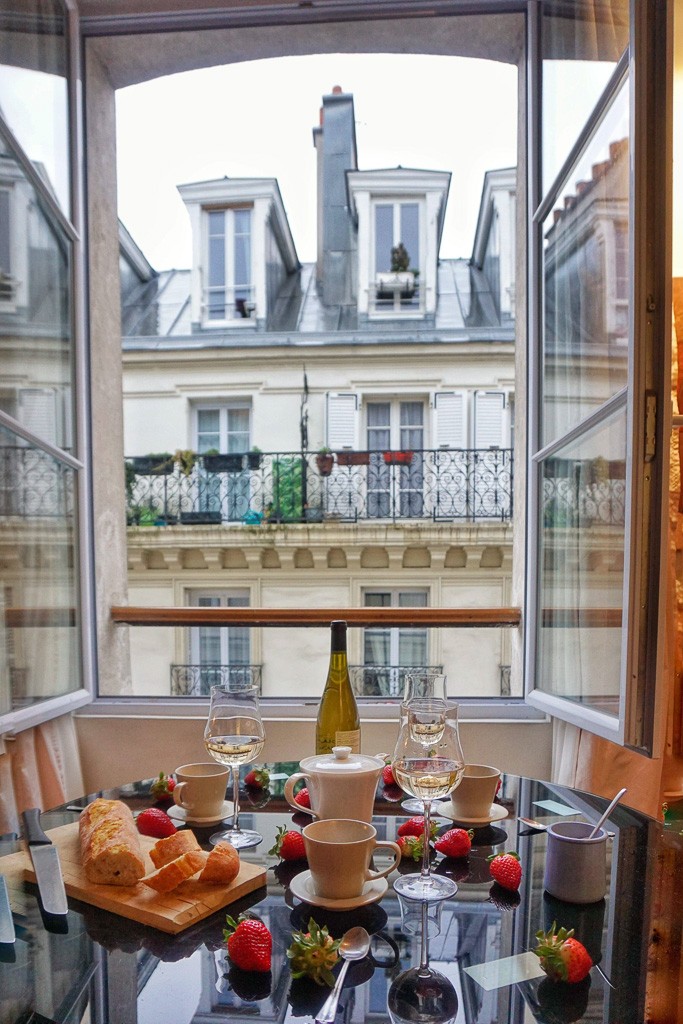 This is an apartment in Le Marais with a little Parisian picnic using ingredients and wine from a local French supermarket! 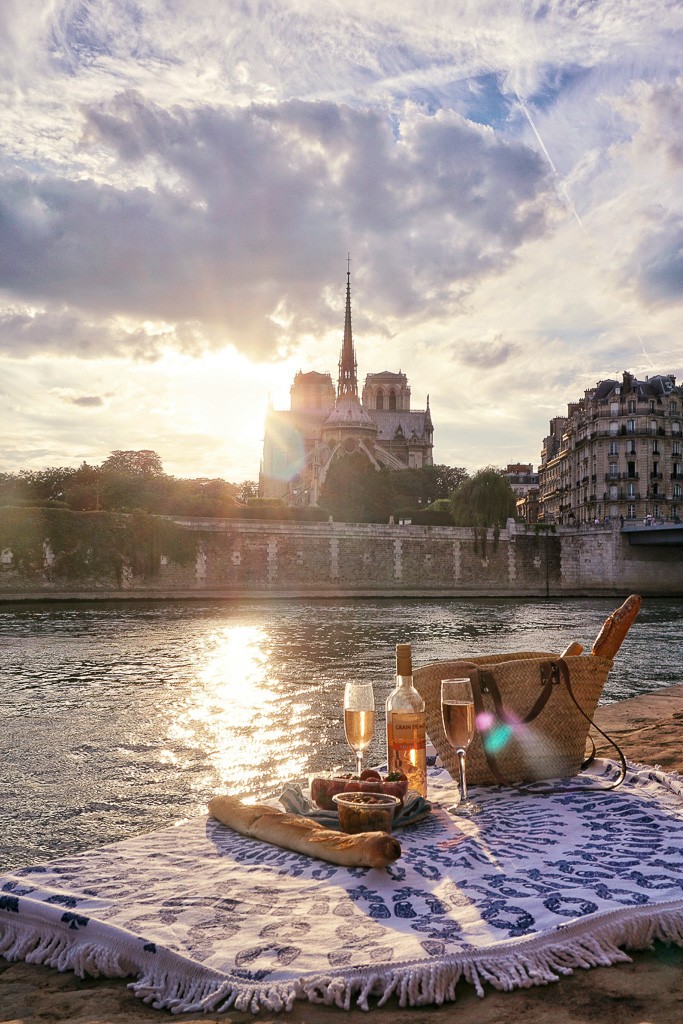 But if you don’t want to splurge, just skip the fancy apartment or hotel and have the picnic down along the Seine overlooked Notre Dame Cathedral
If you want to cut costs even more, there are a lot of free things to do in Paris like the Parc de la Villette open air cinema, Jardin Du Luxembourg, and of course the Notre Dame Cathedral.
There are so many places to see in Paris, but definitely, make time to get this view which I find totally magical: 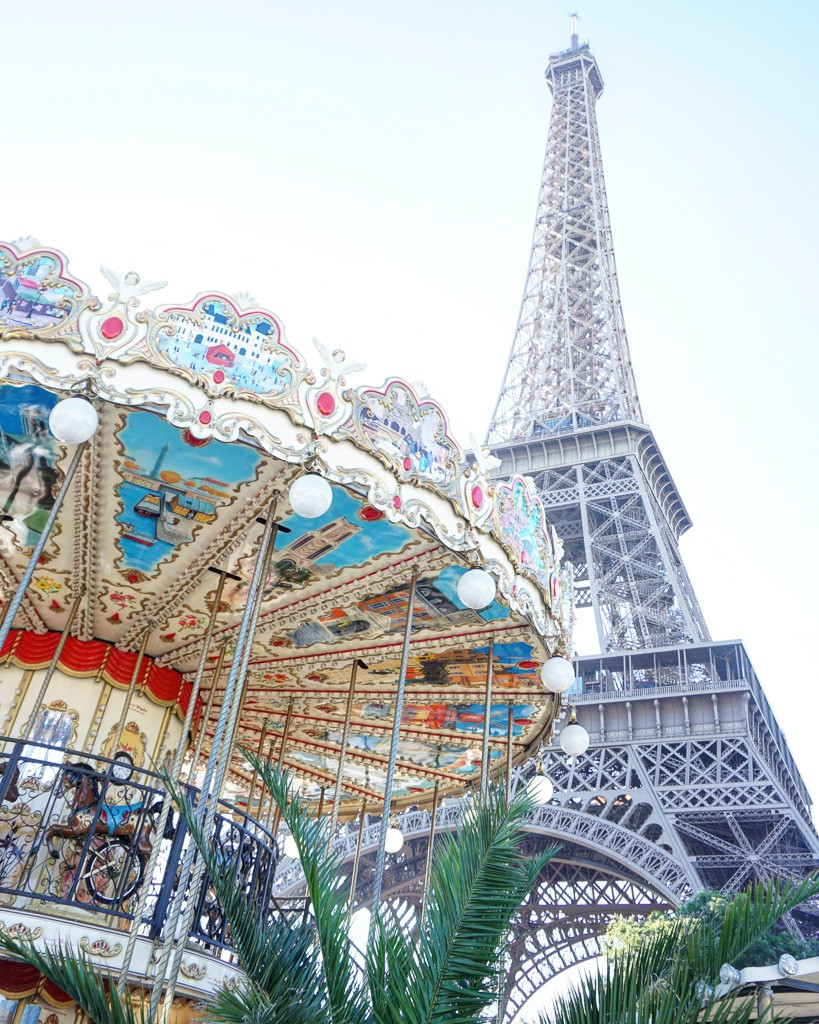 Throughout Paris, you’ll find dozens of carousels, all cute, and most definitely ‘Instagrammable’. This photo was taken at the very base of the Eiffel Tower, though there is another carousel just a few hundred meters away, at the base of Trocadéro. The light around Trocadéro is best in the early morning- head there then to get plenty of photos with amazing light and few people!

The best things in Paris are taking long walks, taking in the views, and of course boozy brunches. Are you dying to visit!?

Just writing this makes me want to head straight back to Paris!

Now,  I’ve talked to a lot of my readers about the best ways to make their travel dreams a reality, especially traveling to Paris. When we talk about the details of their trips – walking down the Seine at sunset, or visiting the Eiffel Tower for the first time – their eyes light up with possibility and wonder. I absolutely love seeing how excited they get! But way too often that excitement fades. That’s because they start thinking about all the reasons they can’t “just go” to Paris.

And I totally get it.

When I started traveling, purchasing a quick flight to Paris was something other people did. Not me! How could I possibly just take off and go travel to Paris? It felt selfish. It even felt unfair. Like, “Who am I to just take off and enjoy a week in Paris?”

Then one day I asked myself “Why not? What’s stopping me?”

And that’s when I realized I had all of these reasons for saying no, without thinking of all of the reasons to say yes! The experience, the excitement, the culture, the beauty. I’d always dreamed of this trip, why shouldn’t I take it? Of course I deserve this!

A part of me wanted to believe everything would fall apart if I took time off for myself- but in reality, I knew things would be fine.

Yes, we’re all busy and it can be hard to make time for ourselves and our dreams. Going to Paris wasn’t just about having a luxurious vacation–it was me saying yes to myself, and my life. And all I needed to do to make it a reality was take one tiny step, which for me was signing up for Next Vacay–which has literally changed my life. These cheap flight deals are really a game changer.

So, Wait – What is Next Vacay?

I have been using Next Vacay for over a year. I reviewed them and it went viral – people started emailing me telling me the amazing deals there were getting from Next Vacay. I am so excited to see people getting to travel places they never thought they could! There are not many companies that I promote, and Next Vacay is something that I believed in back when they were a brand new company and I am so happy to see how huge they have become – being on the live news, TIME.com, and so much more.

Let me sum up how Next Vacay works in case you don’t want to read my past review:

You pay $25 for the whole year, input your local airport and a couple nearby ones, then they start emailing your deals that make sense for you (prices in the email are always round-trip). Then you use the deals to book directly through the airline they found the deal, not through Next Vacay. Basically, Next Vacay are just the deal hunters telling you when a crazy cheap flight is available from your hometown airport to well, anywhere in the world like Paris, Sydney, London, The Maldives, Hanoi, and New Zealand. They don’t send a deal out unless it’s a true “steal”. It’s a husband and wife team, and you’ll right away notice how personable the emails are. 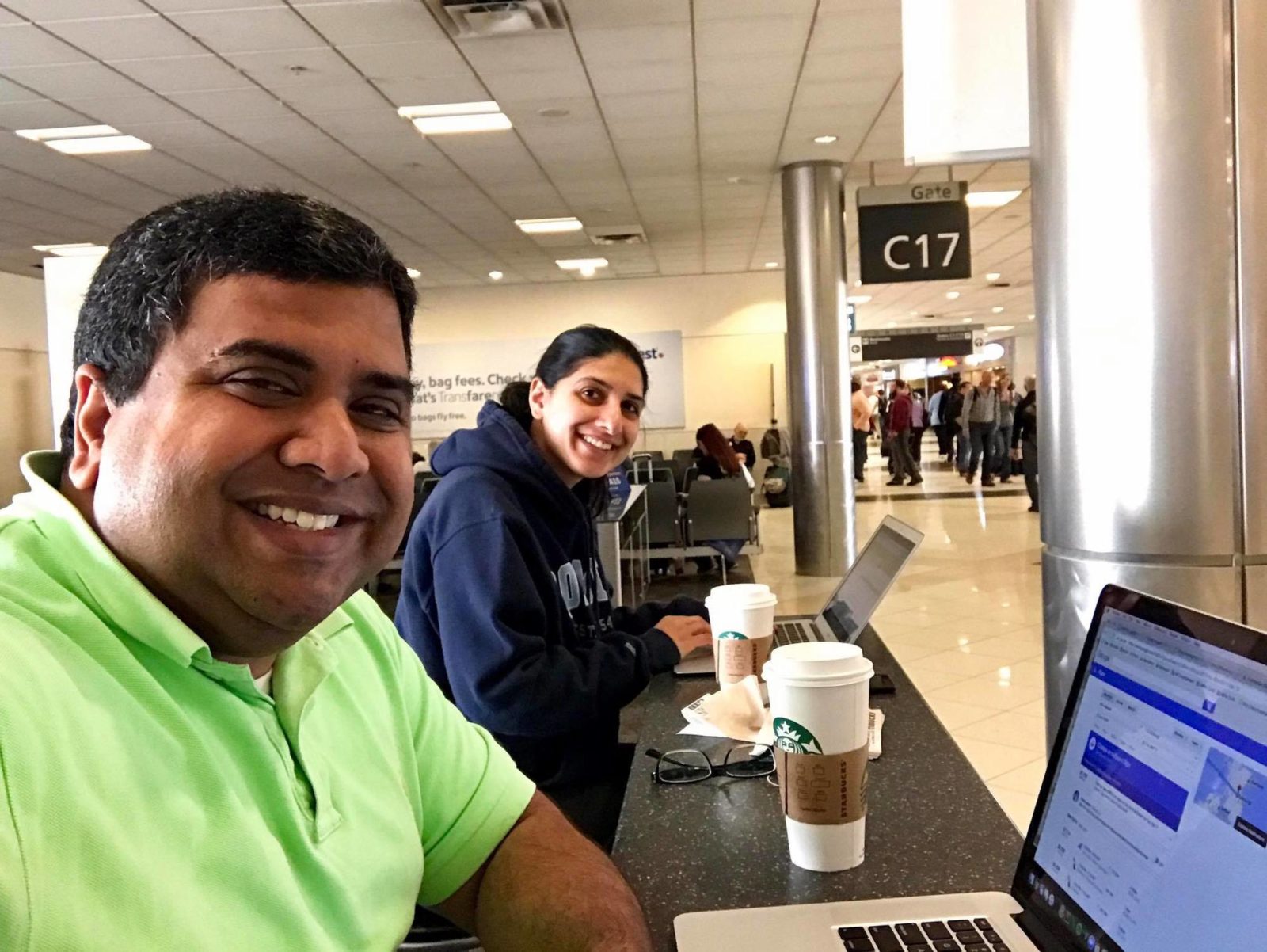 Naveen & Shaylee Dittakavi, the husband and wife founders and deal hunters of nextvacay.com, sending deals out to members while waiting to board a flight

The fact that it’s $25 now and was $25 a year ago means a lot – they aren’t trying to raise their prices. $25 is so cheap to pay for a year of deals, that I’m surprised they haven’t! You can do a free month trial, and you can cancel if you don’t find a deal in six months that you like with a money back guarantee – so there’s literally no downside. They will email you before year two starts to see if you want to go ahead or cancel the subscription (before your card is charged).

What caught my eye with this website over a year ago, was when Naveen, the owner posted to Facebook he was on a roundtrip flight USA-India for just $300. I was like, wow, I NEED these deals in my life.

I haven’t been disappointed with at least 2 deals coming to my inbox each day to amazing places like Madrid for $450, Dublin for $400, Puerto Vallarta for $500 and Mumbai for $825 (with Columbus, Ohio as my home airport). You can also check out Next Vacay’s Facebook page where they share deals that their users got (which the users themselves posted to Facebook). It’s amazing to see people so excited about their upcoming trip. 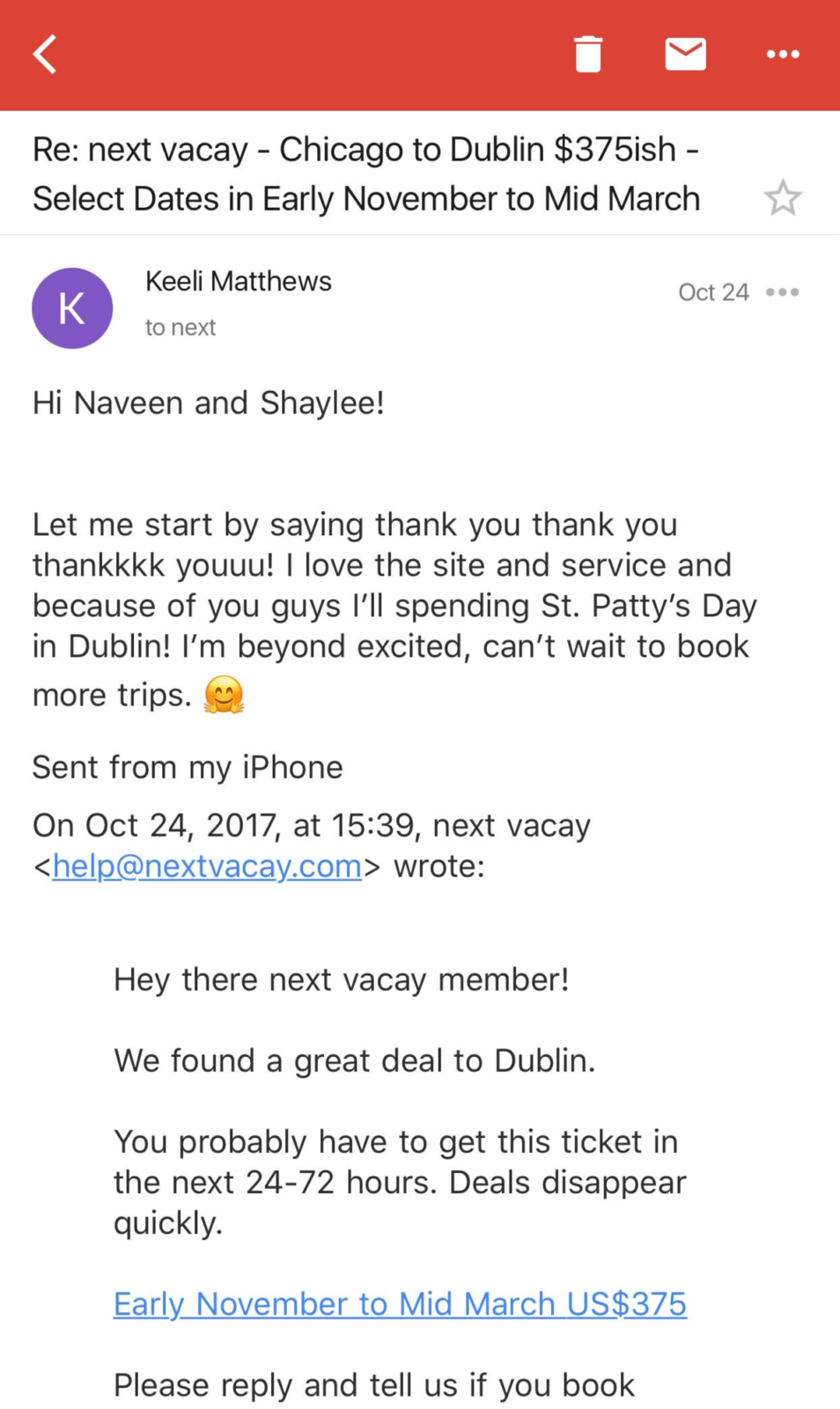 Just by paying $25, you get the best deals ever sent to your inbox which honestly opens up your life to so much – because travel is just “step one”. Once you get there, you will have life-changing experiences, meet friends, maybe meet a significant other like I did, or you might even find a new career from travel! It will open so many doors. I wouldn’t be promoting something I don’t believe in, and I really feel like for $25 this is a no-brainer. The best part is they find deals over holidays and long weekends, too, when you can actually take the time to travel.

Where do you want to travel? Paris, somewhere else? Start now! You can sign up for your free trial and start actually living out your wanderlust dreams at a fraction of the cost. If you aren’t sure it’s as cheap as I say, check out these recent trips Next Vacay members booked  – so awesome.

Click here to get a free trial to next vacay

Pin these cheap flight to Paris deals for later (just hover over and the Pinterest logo will pop up for you to click it): 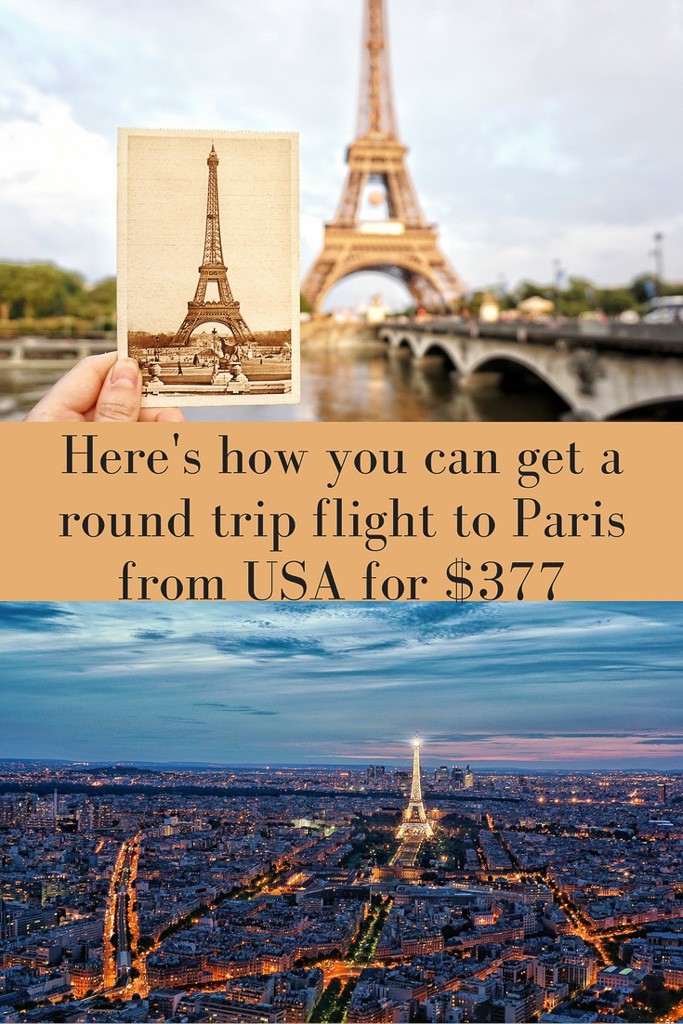 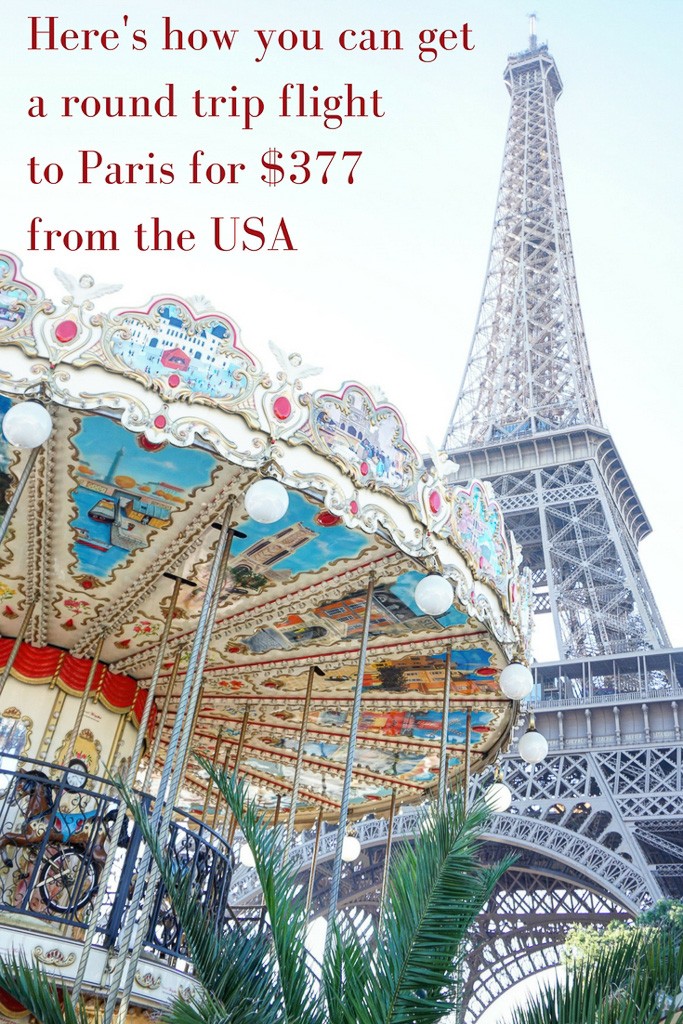 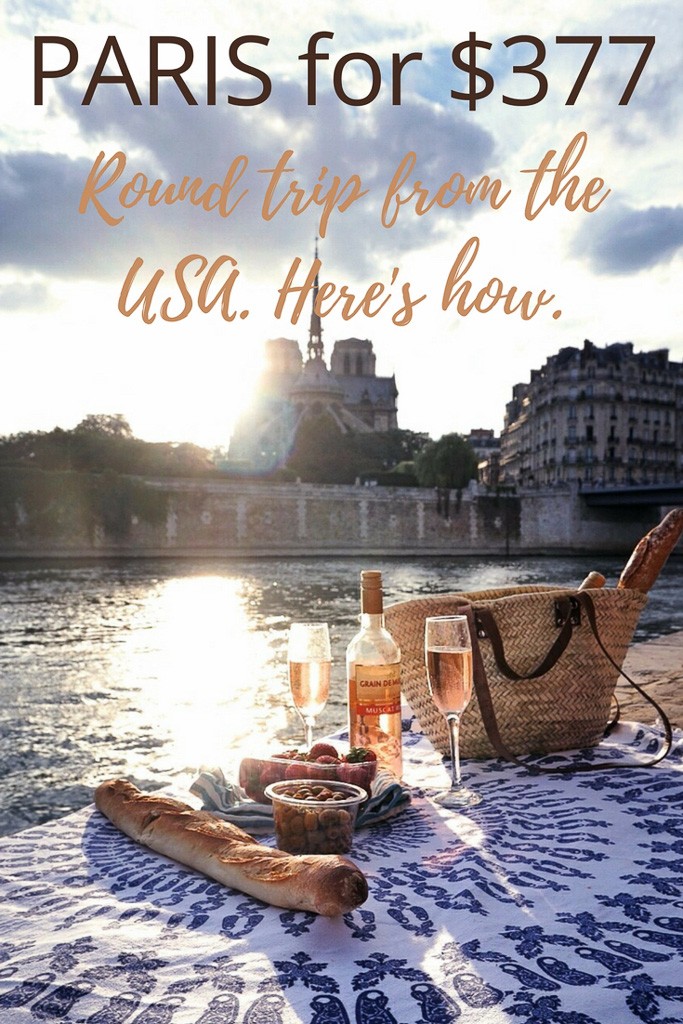 This post is in partnership with Next Vacay. I was paid for this post but only write about things I truly believe in. I have been a happy user of their services for over a year and not only love this company but think it’ll be the smartest $25 you spend toward travel this year!