7 Delicious Restaurants to Check Out in NYC

Looking for some restaurants to try in NYC? Check out these incredible Black-owned options below!

Home for me is all about the food, and I believe in the power of celebrating and supporting Black-owned restaurants year-round. I come from a huge family, so moving to Harlem in the middle of the pandemic in 2020 – and during the week when many protests started to pop up around the city – meant I wanted to find not only the best Black-owned restaurants in the city but also the best spots for comfort food.

While I obviously couldn’t get the full NYC summer experience, I took advantage of ordering takeout and compiled a list of some of my favorite spots as I began to settle into the city I had waited half my life to call home.

7 Incredible Restaurants to Check Out in NYC

The Edge Harlem was started by two native New Yorker sisters in 2014 and celebrates their British and Jamaican roots. You can order everything from fish & chips to ackee or jerk chicken, and brunch staples.

“So… what made you move to New York in the middle of a pandemic?” My soon-to-be father-in-law asked during our first meeting over brunch one Saturday in October. I nervously laughed in between bites of shrimp and grits and explained my love for the city and childhood dreams of being a cliché Black girl writer in Harlem. The shrimp and grits are easily in my top 5. I can’t speak to libations (I was trying too hard to impress my partner’s parents) but the homemade ginger beer and sorrel are definitely worth a try.

Lolo’s was started by Leticia Skai Young and Chef Raymond Mohan. The two take the best of West Indies flavors, particularly with a Guyanese flair. As the daughter of a native Virginian, it was only right that I FaceTime my now inland bound mother as I cracked into the crab and shrimp boil.

The side of sweet plantains were the perfect addition to my crab legs and shrimp steam pot. My taste buds are sensitive to spicy foods, but I chose to indulge myself with the Lolo’s fries. I ordered for pick up, but if you get a chance, sit outside. Their building brings beach vibes to 116th Street––you can’t miss it! 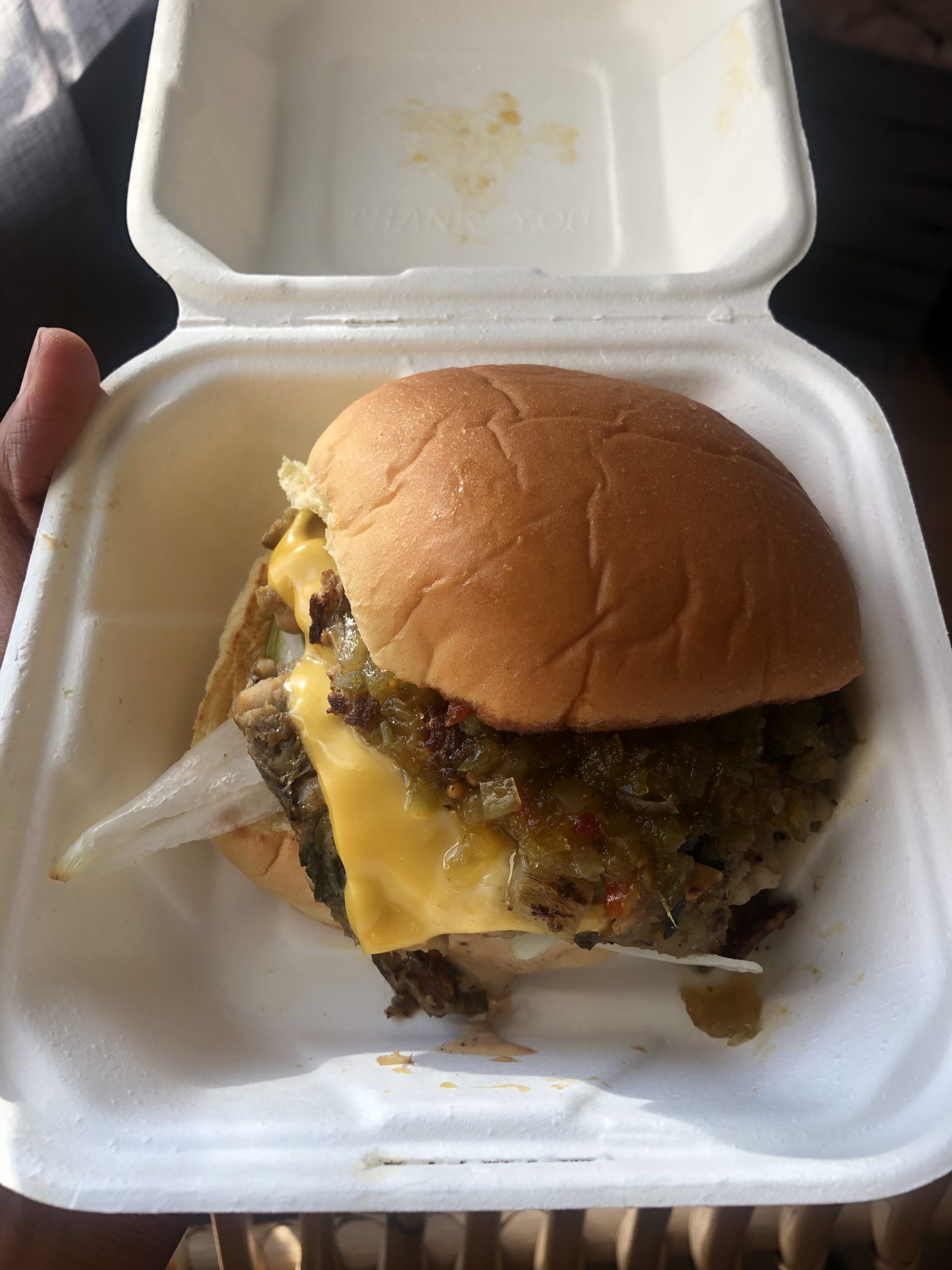 Harlem Shake opened in 2013 and has since received rankings for best milkshake, burgers, and family restaurant in New York City for multiple years. The menu has plenty of options (even for vegetarians––or flexitarians like myself!) but they keep it simple. You can choose between the Classic, Hot Mess, or Jerk for your burger.

I’ve been trying to become vegan for about 5 years. It’s not working, and Harlem Shake doesn’t make it easier. I have had the Hot Mess veggie burger, but I’ve also ordered the Harlem Classic with beef, the cookies & cream milkshake, and sweet potato cheesecake. And I’d do it again. And again.

Founder and Owner Karl Franz Williams established 67 Orange as a tribute to Almacks, a 1840s speakeasy and one of the first Black owned and operated bars in New York City. They are mostly known for their creative cocktails, but their small plates are just as enticing.

I ordered Brussel sprouts with a fig balsamic reduction (to be honest, the first bite had me thinking it was BBQ sauce which made this Kansas City girl very happy) and lobster mac & cheese. So far, 67 Orange Street has the best seafood mac & cheese I’ve eaten in NYC, but keep reading for my favorite mac & cheese. And if the in-person ambiance is half as good as the food I had delivered, I will quickly make this my happy hour go-to spot when it’s safe to do so.

Any Google search of Black-owned restaurants in NYC will surely pull up Red Rooster, so I’d had this spot on my list long before I moved to New York, but never made it. The restaurant also includes Ginny’s Supper Club, a lounge and usual spot for live music performances before the pandemic. They also regularly support and highlight NYC-based artists in their restaurant.

I ordered the Bucatini Piccadilly with a side of mac & greens. That’s not a typo. I said mac & greens, not mac & cheese. And yes, this is my favorite mac & cheese in NYC I hinted at before. It has the comfort of a mac & cheese, but with a little less guilt because collard greens were included. That basically counts as a salad, right? *Googles what vitamins are in collard greens* Rarely do I call mac & cheese perfect (because I respect my mama), but this was perfection.

Harlem Biscuit Company was the vision of Melvin Johnson, or Chef Boots. He has described the difficulty of sticking to his roots––originally taught by his grandmother before formal culinary training––in an ever-evolving culinary world. But Chef Boots has found a niche with Harlem Biscuit Company, which specializes in its namesake––biscuits! They have a selection of biscuit sandwiches, including the classic bacon, egg, and cheese (Bodega) and the eclectic Josephine, a crabcake (yes, on a biscuit), with arugula and aioli.

I had a sweet tooth when I stumbled across the restaurant on Seamless and ordered the Ruby D—strawberry shortcake, but on a biscuit. It was inhaled within 5 minutes while lounging in bed one Sunday afternoon. Delicious is an understatement. It’s simmered in brown sugar, cinnamon, and bourbon––which brought enough joy to someone who drinks her bourbon neat, but subtle enough for someone who may not be a fan of dark liquor.

Melba’s opened in 2005 and was one of the first restaurants I ordered from when I moved. It’s fitting that their website proclaims how the restaurant is like “coming home for dinner, whenever you’re away from home.” I have ordered the fried catfish and eggnog waffle at least 10 times through Seamless since I moved here, so a home away from home, or at least my old home, is exactly how I’d describe Melba’s.

My only warning is the red sangria: it is delicious and sneaky; don’t become a casualty! Two friends and I took a sip of our sangrias one August evening, nodded our heads, set the drinks down, and collectively agreed we would wait until our food came.

What do you think? What are some of your favorite Harlem restaurants?

This list doesn’t cover it all. I’ve walked past many other Black owned restaurants in Harlem that I definitely want to try in person in the coming year, including BSquared, Lido, Seasoned Vegan, and BLVD Bistro!

We all have to eat and let’s be honest, most New York City kitchens aren’t necessarily the best size to cook and quarantine if you don’t live alone. So, next time you’re scrolling through Seamless to find your next bite, support Black owned restaurants in Harlem. 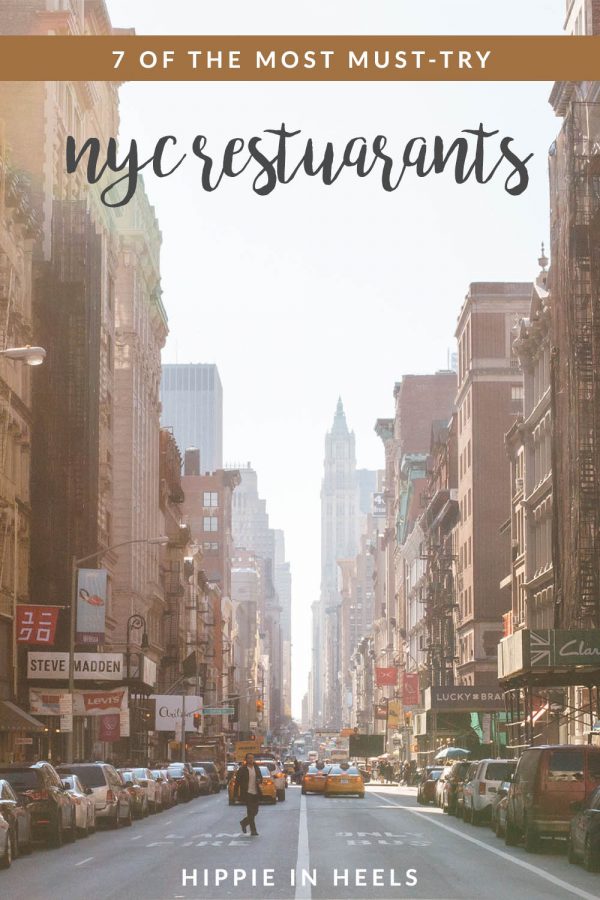