Wow, time flies! I feel like it was just a month ago I wrote my one month in Merida update and started it with “time flies!”. But it does, and we’ve really been loving it here living in Merida, Mexico. We moved here on May 22, 2018, after years in Goa, India (5 for me, but 8 for Ben). We’ve now been here almost a year!

A lot of people ask which we prefer more between India and Mexico and how they are different, so I wrote a blog post comparing the two which you can read here. I am just updating you on life here in case you’ve been following along and wonder what it would be like to move to Merida and just in general what it’s like living in Merida, Mexico!

We love living Merida, Mexico! I have so many blog posts about how to move here from buying a car, getting car insurance to getting a license to getting a place to rent, health care, and so much more like the best restaurants and such! You can read them all here.

We are still in our beautiful rental house which we originally took for 3 months and extended to six months… and now have extended quite indefinitely. I love it here and am so glad we found this place. The landlord of our rental house is an architect and he’s actually designing a new home for us. We are planning on building a house in Cholul, a village outside of Merida to the Northeast. They’ve agreed to let us stay here until our house is done which is such a relief.

As for the house, we have found land but are still having it checked out with a notario before purchasing. We have some backup land in mind in case it falls through but we hope it will happen and be finalized before Christmas so that after that, we can start building. Ben was the project manager of building giant reefs in the sea, so I think he can manage managing building our house with the contractor – even though he doesn’t speak Mayan or Spanish. It will be an adventure and I will definitely share updates about it. I’m actually going to do monthly updates on my website Omni Curated so that I don’t overwhelm Hippie in Heels, since after all, it is a travel blog, not a house-building blog! 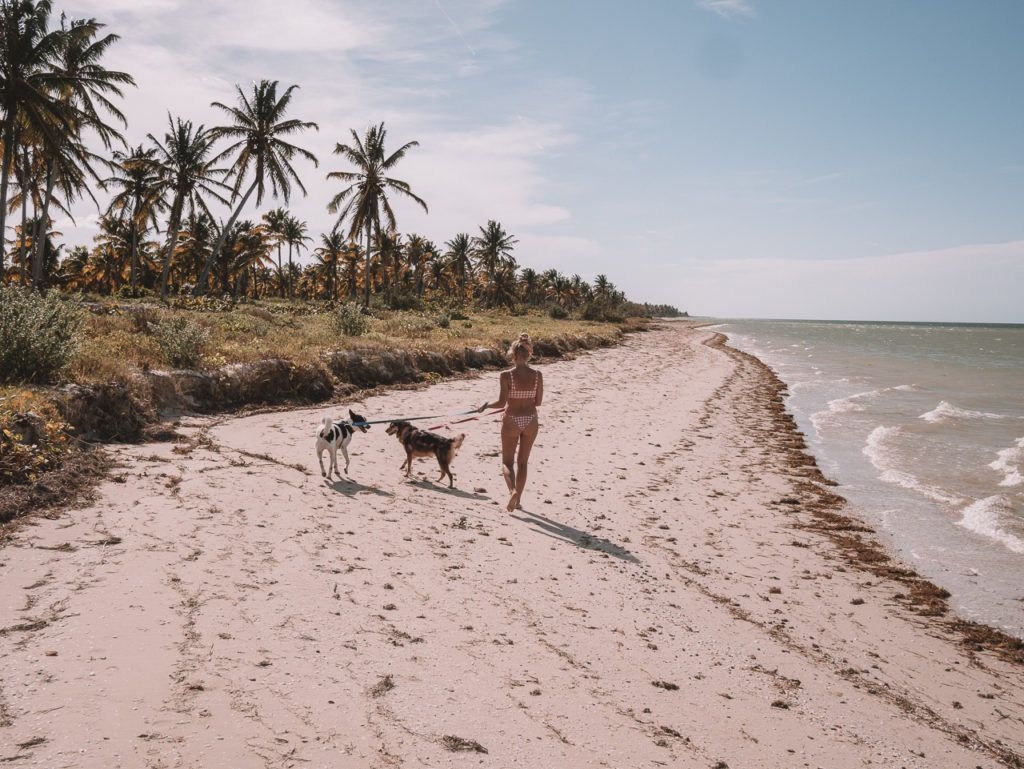 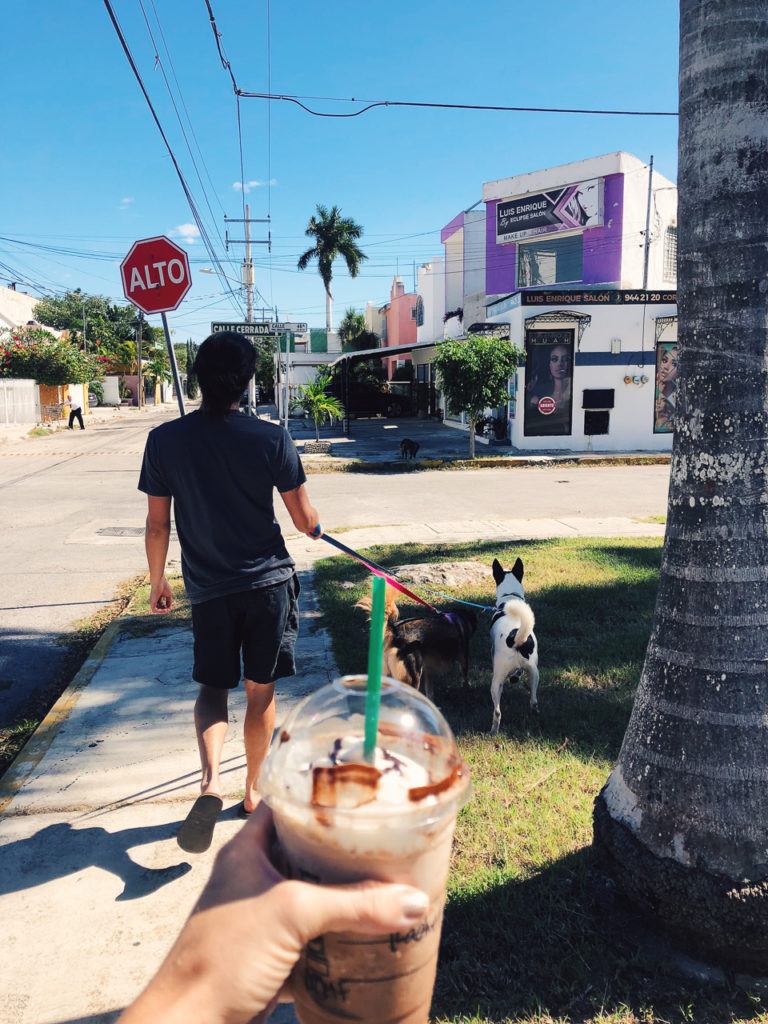 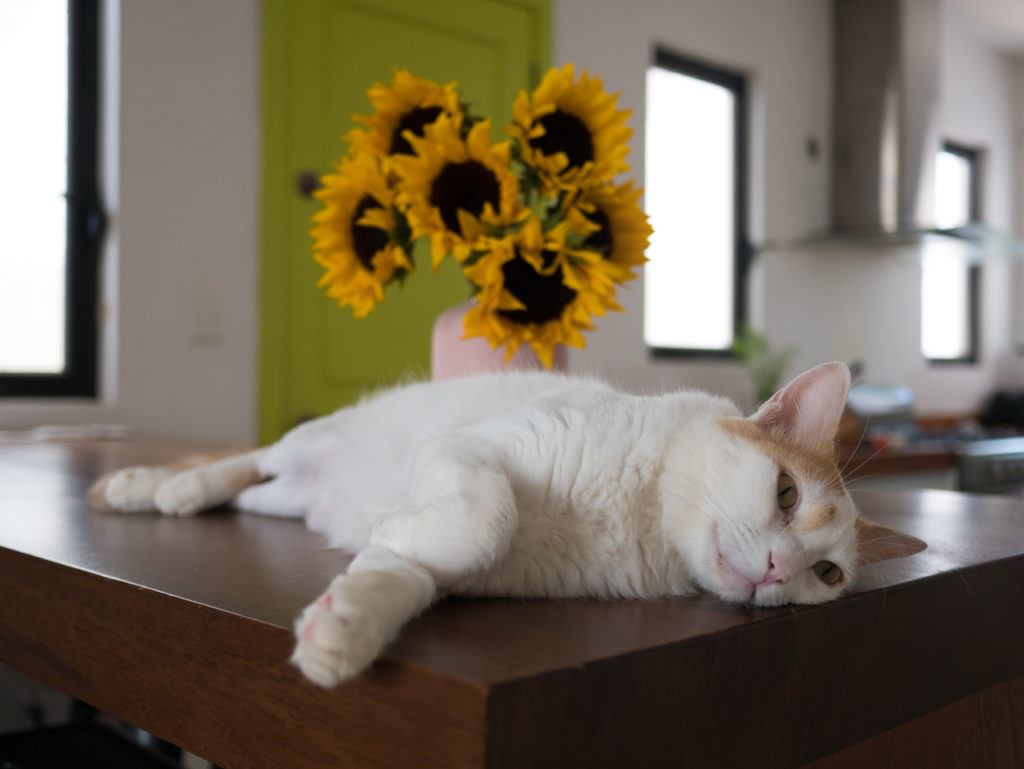 less happy cat, dreaming of how he can next escape 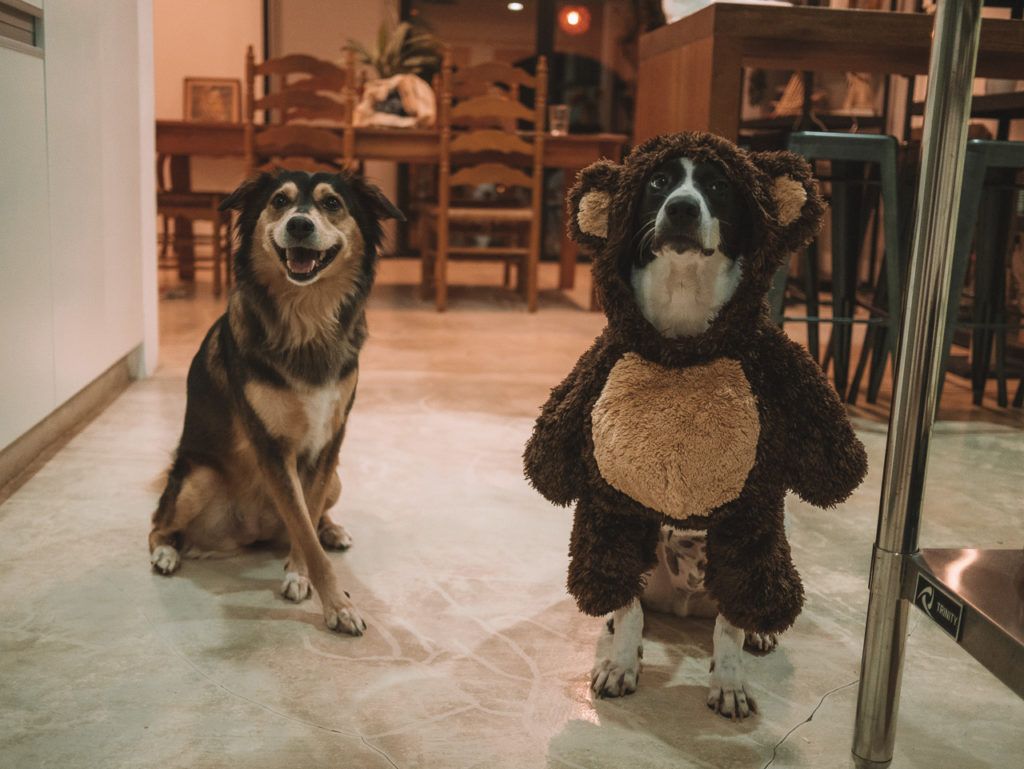 we celebrated Halloween this year… 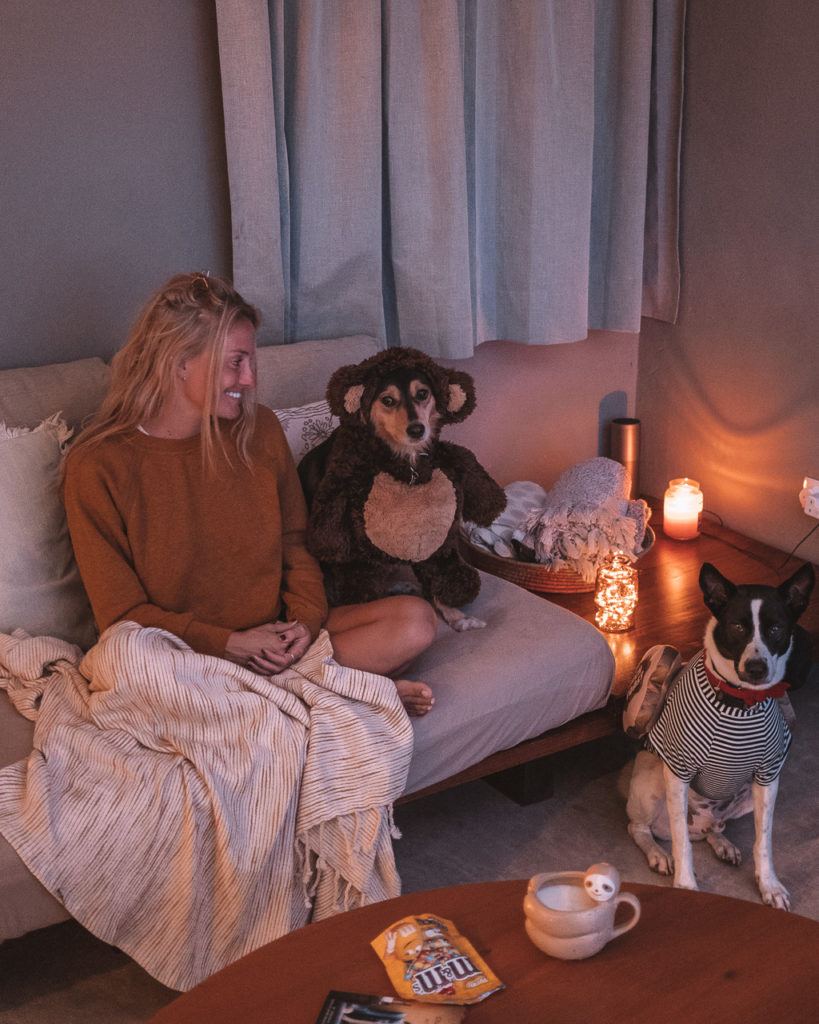 In the time I’ve been here in Merida, we’ve traveled to the USA in July to see my family, I’ve been in New Orleans, New York, and Florida for work. I’ve spent two weeks in Panama as well. Ben’s been to Austria to see family, and Toronto a couple of times for work. I’m actually back to the USA now in Ohio for Thanksgiving. I’ll be back again in a week to go to an awards show in NYC. We don’t sit still much! Luckily, we have found an incredible dog-sitter who loves Shanti, Omni, and Kitkat.

Merida airport is an international airport but a big connection was dropped – the Aeromexico flight from Merida to Atlanta. This flight was amazing because it connected us really well. But since it dropped, places we need to go involved long flights like 12+ hours to go a short distance. Merida just doesn’t have enough international connections. Most often, you have to fly to Mexico City then out. Other than that, we’ve been taking ADO buses to Cancun (4 hours) then flying out of there because it’s actually been faster. That’s been a bummer – but really the only downside. 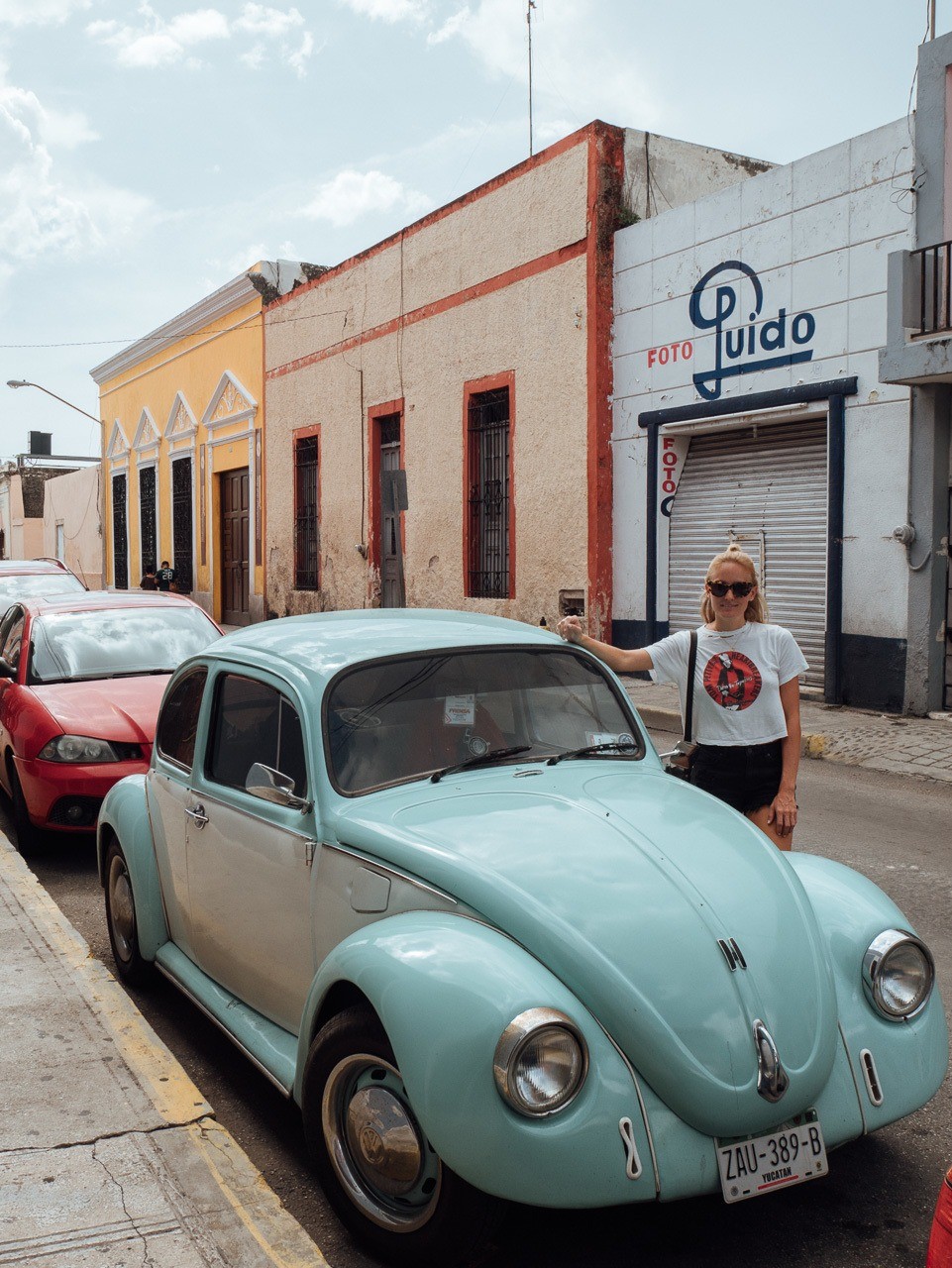 Other than that, we have no complaints here. The pets have been settling in perfectly fine, too. The dogs love it here because we can walk them more, wander around parks and the beach, and not worry about dog fights with strays. Kitkat likes to escape when he can, but he always comes back. It does worry us since we live on a busy road but he’s a cat and they are sneaky – what can you do!?

I’ve gotten a lot done since moving here. I completed my Mexican residency and am now a resident which is pretty cool. I bought a used car, registered it legally, got car insurance, passed my driving exam (on the second try – damn parallel parking), and got a driver’s license. We got health insurance that covers us for accidents abroad and opened a bank account, which I transferred money into from the USA. We are 10x more legit here than we ever were in India in just six months. Okay, I am more legit… Ben has done 10% of that, but does that surprise you? Kidding, kidding ;) He can’t do it because you really have to do the residency first to then do the rest of it and he needs to go to England to get his bank papers notarized. 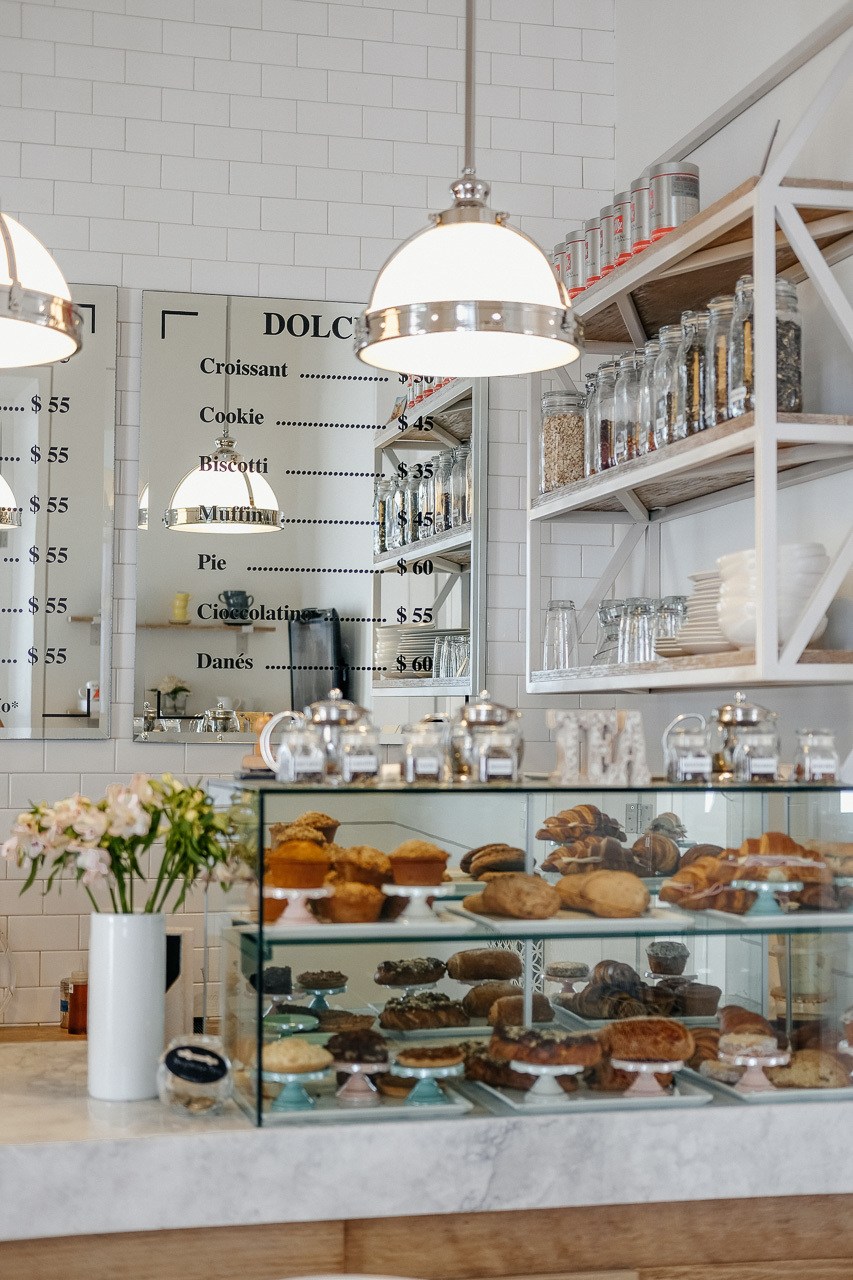 so many cute cafes and bakeries & so many nice people 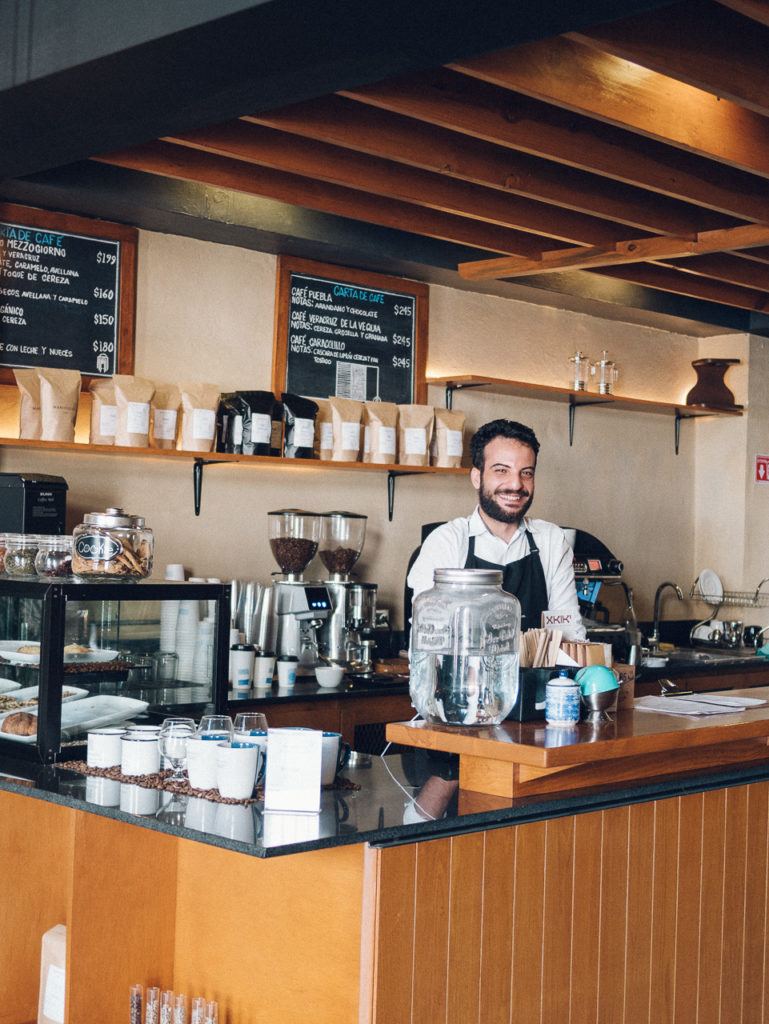 With so much travel and so many “to do’s”, it was a busy time. I love checking stuff off a list, so now that it’s literally all checked off (minus building a house), it feels incredible! I actually have a post written, which I’ll post soon, about how to move to Merida and the exact steps I took and how to do them yourself.

Since we moved here in May, we got here at the hottest time here in the summer in the Yucatan with full humidity. May in India is hot but it was that same heat here for three months straight. I won’t lie, it wasn’t great! I begged my architect for central A/C in our new house (split levels just aren’t the same, I want to come home to a house that is already cooled off) but after running through the pro’s and con’s it’s just absolutely crazy to do central A/C here. Damn!

The funniest thing is that Christmas-time here is the “peak” season and it’s still really hot and beautiful weather – but if you go into Costco or the mall, they’ve put away all the summer stuff like coolers, beach chairs, and umbrellas, and put out all winter clothes and flannel PJ’s! It’s so funny. It’s still like 90 degrees here and in the evenings, old ladies are in like winter coats. It’s SO Indian! They do the same thing. Our friend Leena used to come to our house in a winter coat with a scarf at 2 PM and it was like 85 degrees. 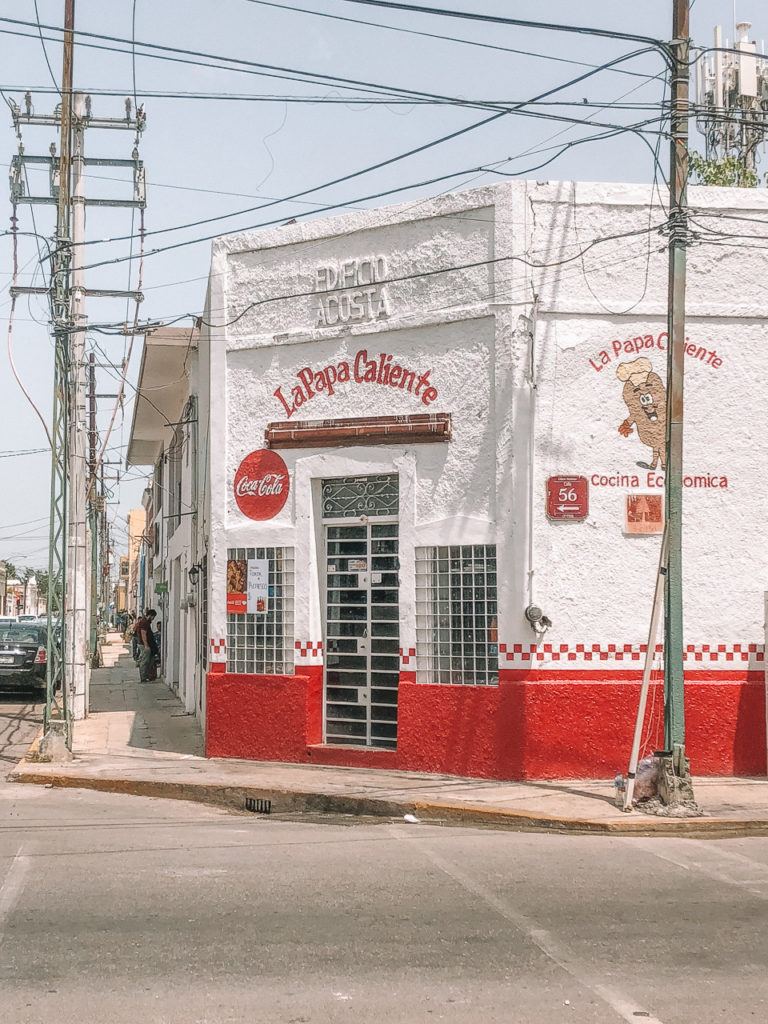 Anyway, through all the busy-ness, we still did a lot of fun things around here. We had a couple of friends from Goa visit. We explored the yellow town of Izamal and did a day trip to Uxmal (Mayan Ruins). We’ve found cenotes and haciendas, tried local food, hung out in cantinas, explored different beaches, and tried as many restaurants as we can! We try to get out and make friends but it’s not that easy since we live in the Norte area and the bars and such are all in Centro 20 minutes away, we kind of talk our selves out of going. My goal next is to get out more and meet more people.

We’ve also been loving that we can get items at the grocery store that we couldn’t in India so we’ve been cooking a lot. The funny thing is, Ben had to cart Indian curry paste from Canada (the good stuff) so we could make curries here. We definitely miss Indian food! 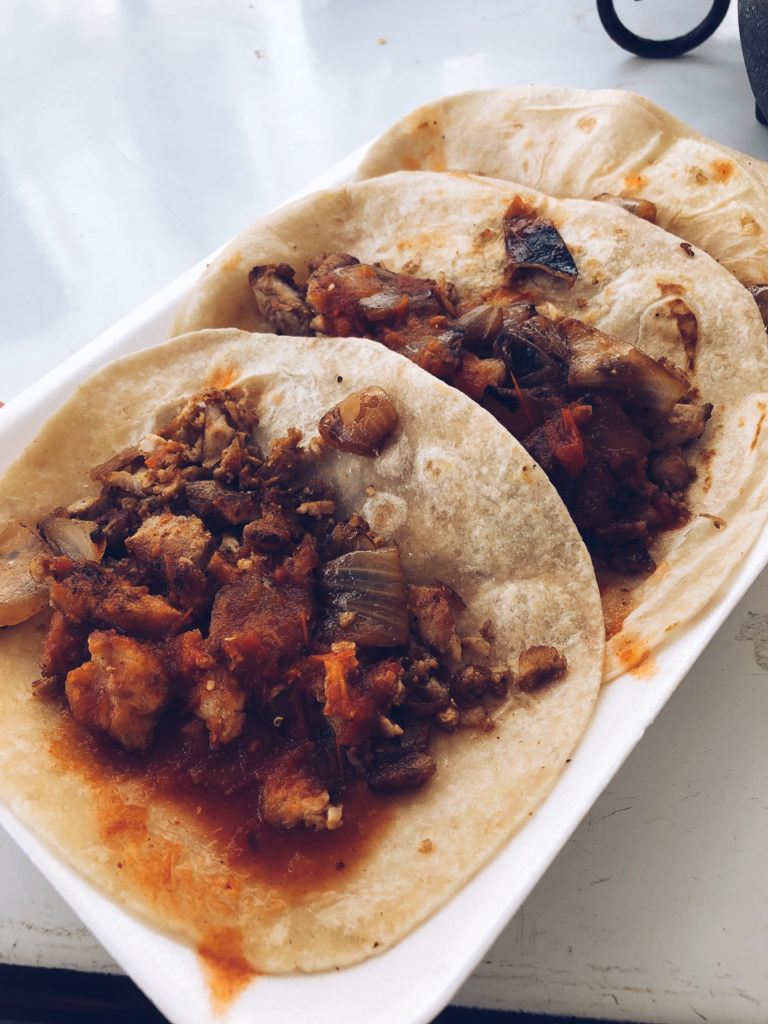 tacos4life but missing us some curry!

Other things I’m loving here: being able to go to fancy movie theatres, my pilates class, going shopping with friends at actual malls with stores like Sephora (I have two friends now, lol), and being able to eat local Yucatan food but also Texas Roadhouse because lets be honest, I missed that kind of thing like crazy in India! I love the spas here (as good as Snips in Goa!) and the fact every single person is friendly – my Uber drivers wait until I get in the door before they drive away. I love Uber Eats! Food delivery is the bomb.com. It’s just been pretty wild coming back into the “real world”. 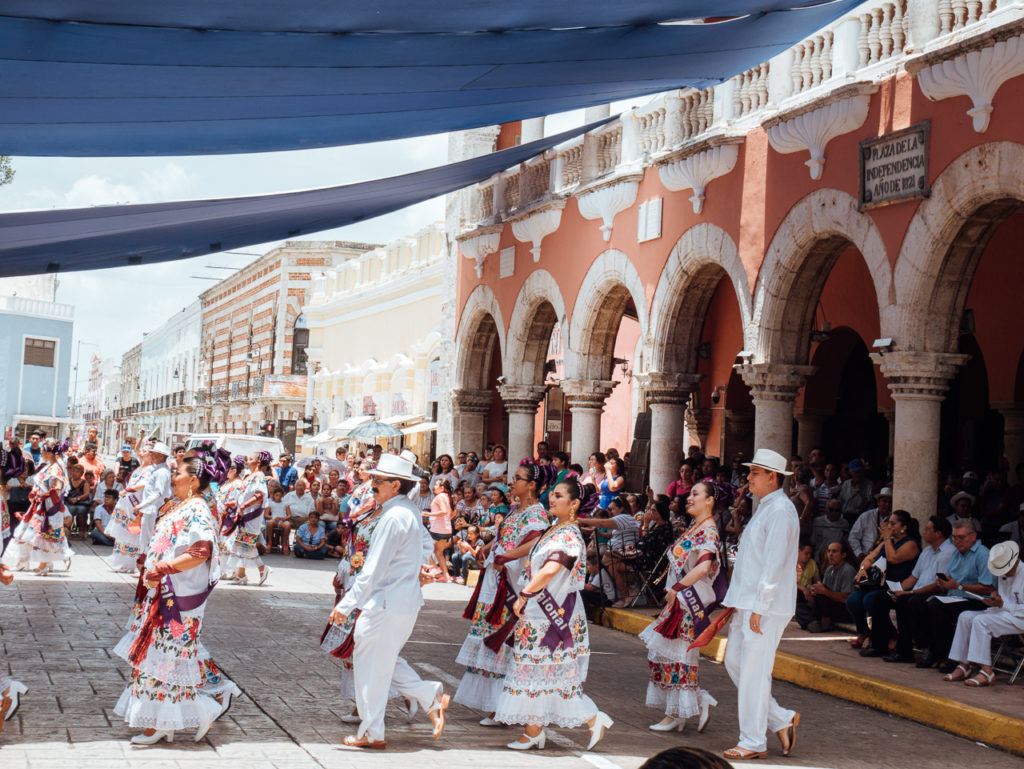 there is always something going on here, you are embedded in the Mayan culture

It’s always a hoot to see what expats from the USA complain about here because Ben and I are still in the mindset of “it has everything, it’s so easy!” because compared to five years in the jungle in India, I might as well be in the USA right now. I mean, there’s the Walmart – several. I can get Velveeta cheese here and coffee creamer. Life is good.

I’ve gotten to see my family more this year than I have in the past 7 years and it’s really nice; a feeling I can’t really describe. India was SO far from home and just being closer is a nice change. I’m on the same time zone and can message friends and family throughout the day. My mom came with me to Florida and when the trip was over and she went back to Ohio, and me to Mexico, I didn’t have that pit in my stomach because I knew I’d see her again in a month (which is right now because I’m home for Thanksgiving)

In December, my parents and Ben’s mom and her boyfriend and his little brother are coming to stay with us over Christmas. My mom said, “by then, we’ll probably be sick of you!” After so many years seeing each other only July every year, it’s quite a change to be able to laugh about seeing each other too much. 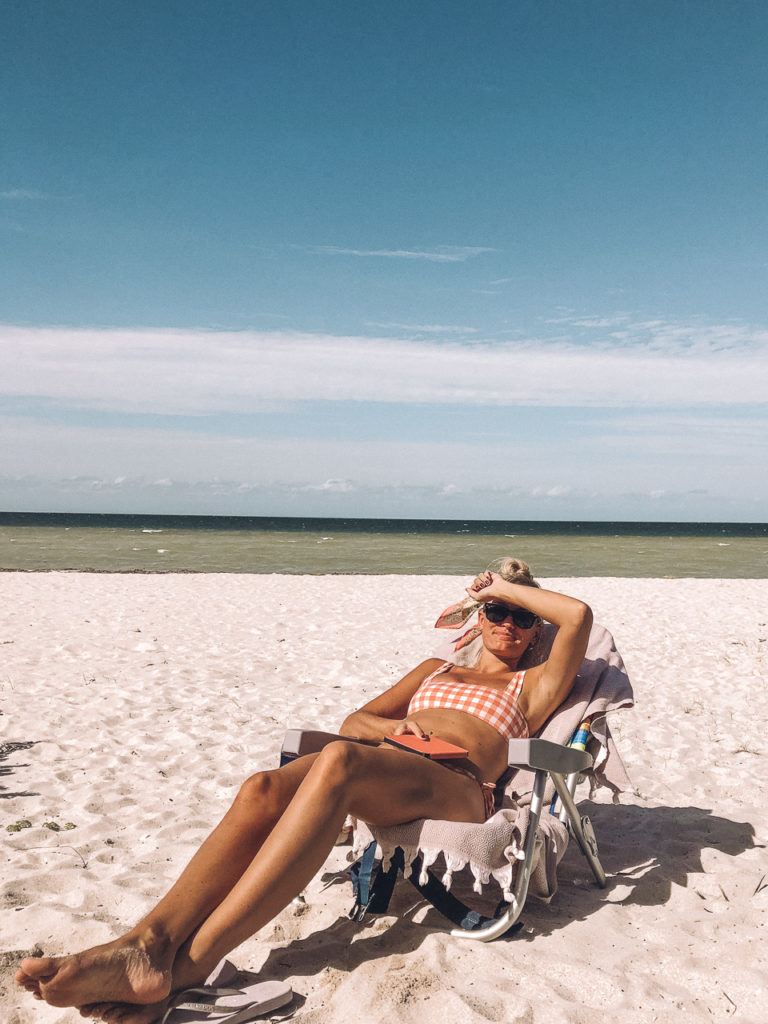 After Christmas, we plan on visiting India in January. My friend had a baby, Zyon, and I’m (one of) his godmother(s). We’ll hang in Goa, and then I’m off to explore around India somewhere new! From there, I don’t know what travels await really. I know I want to see more of Mexico, Central America, and South America but we’ll also be building a house and I have a feeling that’s going to be more work than I’m imagining.

It’s been a crazy change this year but Ben and I both know we made the right choice moving from Goa when we did. We’re really happy here in Merida and looking forward to settling in even more! I hope you liked this look into what it’s like living in Merida, Mexico.