That Time I Was Headbutted By a Cow in India…

A handful of bad things happened while in confusing and hectic Varanasi, and at the moment a cow threw me into a wall, I’m pretty sure I was thinking “ARE YOU FUCKING KIDDING ME!!?!” It was one bad thing too many.

Ashley, my fun lovin’ English buddy had just been pick-pocketed and was so “it’s not a big deal” (while I remember being pick-pocketed in Barcelona and going all karate-kid on some dudes) and she was off looking for her wallet at the train station.

I was feeling super sick having just left the hospital from one of many Dengue appointments, and spent most of the afternoon puking my guts up. I headed home on my own while Ash did her thing.

Varanasi has tiny little roads, like Venice… but filled with cow poop.

The rickshaws can’t take you down, and those who travel with rolly suitcases really regret it after the cow poo build up in the wheels. 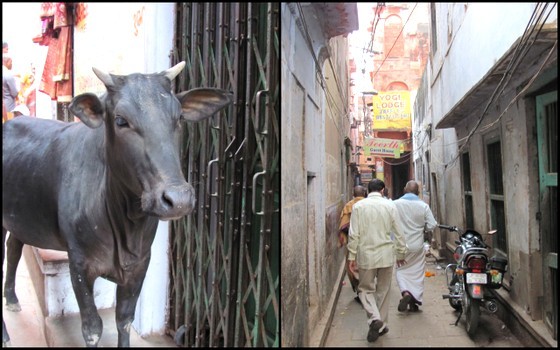 I was told there was no such thing as a mean cow in India. Having been in India a while, I thought cows were my little pals. I would walk past them, pet them, whisper jokes to them and they’d laugh about what a hoot I am…  I mean, this guy below loves shopping for scarves as much as I do. Kindred spirits. 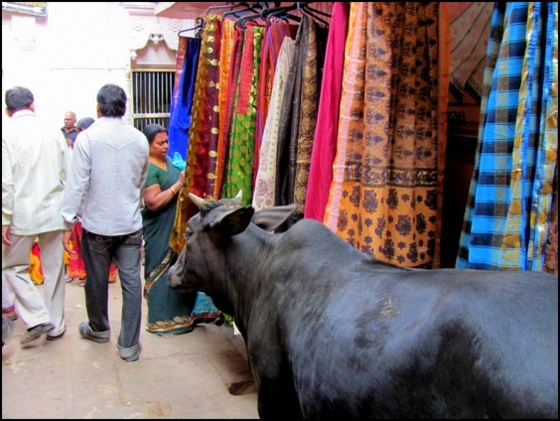 This next cow though… he just gave me a bad feeling. He was big and was looking right at me.

I thought I was going to vomit again and/or pass out because I was still feeling really sick, so I didn’t want to take a detour. I decided to just walk past him nonchalantly like I always do.

I think I thought about it too long- because he was pretty annoyed with me, so much so that he THREW ME into a wall with his head.

It happened so quickly I wasn’t sure what to do! He didn’t even move his feet. With just neck power, he whipped his head against me, and his horn cut my bum (and ripped my pants open, whoops, I’m sure the locals were all look at that scandalous disrespectful white girl with her ass out!).

He actually picked me up into the air and jammed me between his head and the wall. I put my hand up to protect my face and my hand got busted up a little bit, road rash style.

As soon as he let me go, I ran to the end of the alley around a corner and peeked back at him to see if he was chasing me. He still had not moved his feet. He was straight chillin’. I took a photo, obvi. 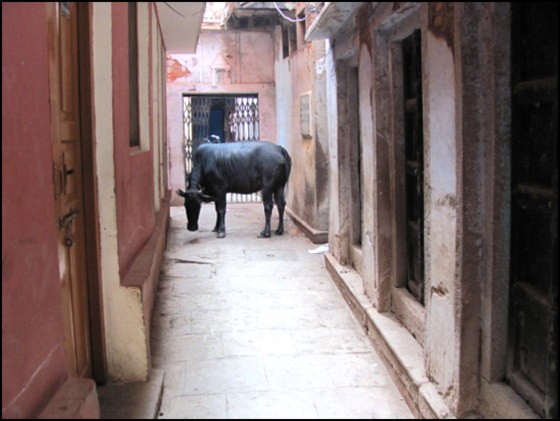 I told my guesthouse owners what happened and they were basically like, “No, that didn’t happen. Cows are nice. You are a liar.”

By the time Ashley came back (without her wallet) my entire left butt cheek was black and blue. We ate a sad lunch on the rooftop before going to the confusing Ghats to cheer ourselves up by watching cremations.. so that sounds a little weird, although it’s a real party feel at the Ghats- people here don’t fear death like most people.

Ever since, I’ve been a little more hesitant around cows. Obviously they are everywhere. I actually wrote an entire post about how much I love cows. I’m not going to let one bully (get it? BULL-y) get me down.

It was a not-so-nice reminder: cows are wild animals. That is one of my many tips to remember in Varanasi for the next time. Duh Rachel.